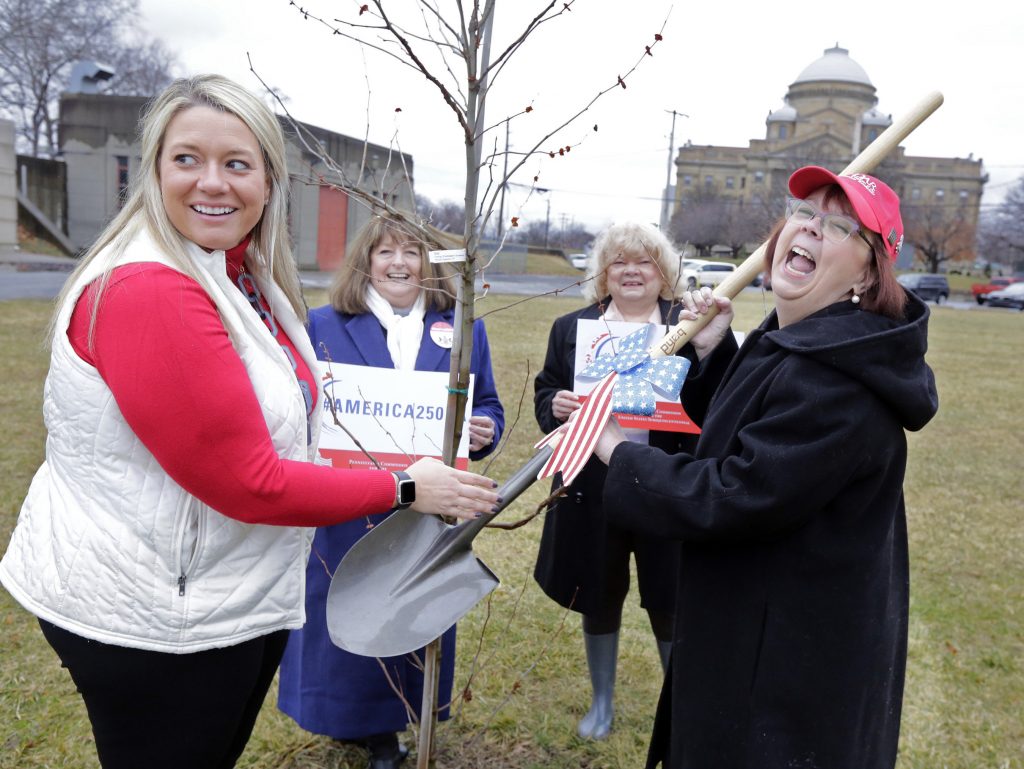 Daughters of the American Revolution look to inspire statewide tree-planting

A Daughters of the American Revolution chapter from Luzerne County is trying to branch out through the rest of the state as Pennsylvania prepares to celebrate America’s 250th birthday in 2026.

The DAR, Wyoming Valley Chapter, planted a George Washington sycamore tree from Mount Vernon on the grounds of the Luzerne County Courthouse in 2018 and is hoping to mobilize chapters around the state to plant trees at the courthouses of all 67 counties.

Local DAR members have recently partnered on the project with America250PA, the statewide commission organized to promote Pennsylvania’s key role in the birth of the nation and plan the semiquincentennial celebration.

“What better partners to have than people who are so engaged in history,” said Cassandra Coleman of Exeter, executive director of America250PA. “The DAR is such an important group for this project. It’s something for Northeastern Pennsylvania to be proud of.”

Coleman said it was fitting that the Wyoming Valley Chapter was highlighted to launch the partnership because it was the first DAR chapter organized in the state and 13th oldest in the nation.

The DAR is a linage-based membership service organization for women who are direct descendants of people involved in the United States’ fight for independence. They promote historic preservation, education and patriotism.

The state chair for the DAR’s AmericaPA250 campaign, Cynthia Pritchard, is a Wyoming borough native who has been a member of the Wyoming Valley Chapter since she was a teenager. Pritchard, who lives in Delaware, said the Wyoming Valley chapter was “hand picked” as the launch partner because it was the first chapter in the state. She’s honored to be the state chair and proud to represent Luzerne County.

“We started with the first chapter in the state, the home county to both Cassandra and myself. That’s where I was born and raised, so it was kind of serendipitous,” Pritchard said. “My family has been there since way back when.”

Pritchard said her ancestors settled here in the early 1800s.

Heather Ruseskas, 59, of Plymouth, the regent of the Wyoming Valley Chapter, said one of her ancestors was killed in the famous Battle of Wyoming.

She’s got involved in the DAR about 10 years ago.

“I was looking for something to involve me in the community,” Ruseskas said.

The idea to have local DAR chapters plant trees at county courthouses across Pennsylvania started with a DAR-backed campaign to plant 76 trees between Valley Forge and Philadelphia, integral places of the American Revolution.

“We were thinking how do we involve all 67 counties in the state,” Coleman said. “If this isn’t a branch of the original project then what is?”