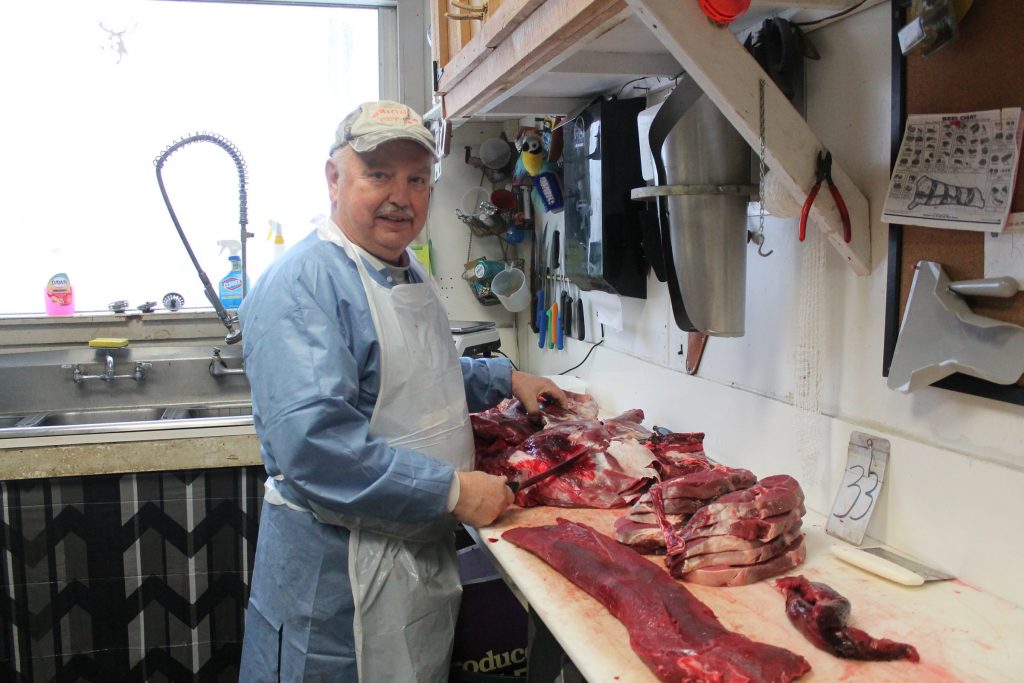 Cut up deer the Wright way

Nestled in a snow-capped corner of Monroe Twp., Wright’s Cut-up is a poorly kept secret to hunters in the area.

Since 1999, Dale Wright — alongside his sons Eric and Scott, nephew Tom, and staff member Cheryl Goble — has provided deer processing for those successful enough to bag a deer.

“This has been an extremely good season,” said Dale. “Not a lot of people process their own meat, so we are doing well.”

The start of Wright’s Cut-up began with a single deer 20 years ago. Oldest son Eric was asked by his boss to process his harvest, and Eric wrangled his father and brother into the deal. After that first buck, they said, “We can do this.”

In that first year, they did three or four deer, plus their own. They have grown bigger and bigger each year, doing about 30 last season.

Wright revealed that they didn’t see an increase on Saturday, the new opening day.

He said, “The people who went out Saturday morning would have gone out on Monday anyway.”

As with most smaller, family run businesses, the Wrights can only process what they have room for. “We might have to cap our drop offs soon, we are pretty full out there,” said Dale.

In fact, a tour of the facilities revealed around 20 deer and a bear carcass in the freezer.

Scott said he feels the numbers of new hunters, though, is decreasing.

“It is a generational thing,” he explained. “We don’t get too many young hunters. Nowadays, both parents are working and don’t have a lot of extra time to take the kids into the woods. It’s hard.”

Dale agreed, adding, “My sons were bred to hunt, but their kids weren’t pushed. Out of my grandkids, they don’t all hunt, and that’s ok. They all eat it though.”

With about the same flow of deer in archery and rifle seasons, the Wrights do see some traditions continuing in the county, including holding off on Sunday hunting.

“Traditionally, Sunday is a family day, not a hunting day. And that’s ok,” said Dale.

Scott, who works maintenance in the Tunkhannock Area Schools, believes area schools may change the calendars in the upcoming years to reflect the Saturday opener. Currently, Tunkhannock, Lackawanna Trail, and Elk Lake are closed on the Monday after Thanksgiving for opening day.

Scott did agree, however, that the Saturday opener provided an extra opportunity to college kids who might be home for the holidays, and have to return to campus on Sunday night.

“That Saturday gives them a chance to get in the woods,” he said.

Wright’s Cut-up also provides services for bear and elk, and in the offseason, they will occasionally process beef and pork.

Once, they even handled a moose from Newfoundland, Canada.

“We don’t advertise it, but if someone asks, we can do it,” said Dale.

As for the deer, once it is shot and field dressed, a hunter may bring in the full deer to the shop.

Hunters can also bring in deboned meat if they prefer.

“The main thing is, when you field dress, please try to do it properly,” said Scott. “You wouldn’t believe what we see in here. If it isn’t done right, the meat will spoil.”

He says that there are some decent tutorials on YouTube, but traditionally the PA Game Commission has had small cards to take into the field with you.

He continued, “Older hunters sometimes have a problem with field dressing due to the cold, and movement abilities.”

From there, the Wright family takes the hunters name, license number, and tag number, and asks them how they would like the venison cut.

A number is assigned and attached to the deer before it is skinned. From there, the carcass is moved to the freezer until it is ready to be processed.

In the processing room, with the number still attached, the meat is cut, prepared, packaged, and placed into a plastic tub.

The butcher shop does mostly roasts, steaks, and hamburger. The ground up venison can be mixed with wither beef or pork, depending on the hunter’s preference. They have also had requests for kielbasa.

“Whatever deer you bring in is the deer you get back,” said Eric. “Some of the bigger places weigh your deer and then pool the ground venison with other venison from a group of hunters. Then you would get the poundage of meat returned.”

He continued, “We don’t do that here, you always get your own meat back.”

All venison is vacuum sealed, and after the finished product is placed back in the freezer, the hunter is called to pick it up within 24 hours.

Processing time turn-around from drop off to pick up can vary depending on the size of the animal as well as how many Wright already has hanging.

The shop has limited space, so they must impose a $5 a day fee, after the first call, for any meat not picked up in the time window.

Wright’s Cut-up is the only processor in Wyoming County that donates to Hunters Sharing Harvest, a registered 501c3 nonprofit venison donation program for hunters who share their extra venison via a statewide network of participating butchers to Food Banks across Pennsylvania.

“Last year, we donated 825 pounds to the organization,” said Scott.

Wright’s also provides sportsman with the option of mounts. Friends Mike Burnaford and Ray Woods have worked in conjunction with the family for a handful of years to make different styles of mounts available to customers.

“We cut the horns for five dollars if they want, but we also know a guy,” said Dale with a smile.

As the deer season slows down, the Wright family is showing no signs of stopping.

“We have plenty going on around here,” said Dale. “We stay busy.”

Wright’s Cut-up is located on Dietz Mountain Road in Monroe Twp., and is available by appointment only, with no drop offs after 7 p.m.