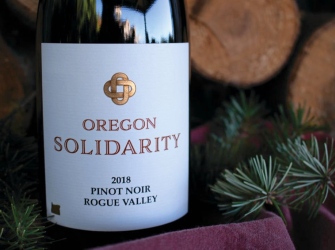 Companies band together for collaborative wines after fire

While growing in reputation, Oregon’s wine industry remains surprisingly small when considered against total United States wine production. But its producers also are chummy, even clannish, in their fidelity to their state and each other. You can find examples large and small of winery people helping colleagues through a crisis.

One of those examples is on the shelves — Oregon Solidarity wine is produced by a coalition of the state’s wineries that rushed in to help wine grape growers in the Rogue Valley in a time of crisis.

After the Klondike fire ripped through 174,000 acres in summer 2018, grape buyers became worried that smoke from the fire would taint Oregon’s grapes and, thus, the wines. They then canceled their contracts with Oregon growers.

In fall 2018, growers learned that out-of-state buyers were canceling their contracts about a week before harvest. Consider the process of farming: spending a year or more of time and money on a crop, and when your annual payday comes, you’re denied. It could have meant financial ruin for some.

Two big players in the Oregon wine business, Willamette Valley Vineyards and King Estate, hired a laboratory to test the fruit for smoke taint and determined that while there was some evidence of smoke exposure, in many vineyards it remained below the threshold of detection for wine drinkers. The two wineries bought up as many of the lots of grapes as they could in the limited time they had.

Aside from the heartwarming story, Rogue Valley is interesting for being a warmer part of Oregon, sitting near the border of California. The wines are bigger and more extracted, and they experiment widely with warmth-loving grapes you don’t see in the rest of Oregon, like Rhoñe varieties.

Not surprisingly, Oregon Solidarity 2018 Pinot Noir Rogue Valley is an excellent representation of Oregon pinot noir with ripe, rustic cherry character, spice and fresh earth, with a touch of tannins and mouth-watering acidity. $28. ★★★★ 1/2

The bottle price is above average but typical of an Oregon pinot noir of this quality. Proceeds from the wine go to help the other growers whose grapes bore the brunt of the Klondike fire’s effects.

You can find the Oregon Solidarity Rosé for $19 and the chardonnay for $23 in Pennsylvania.