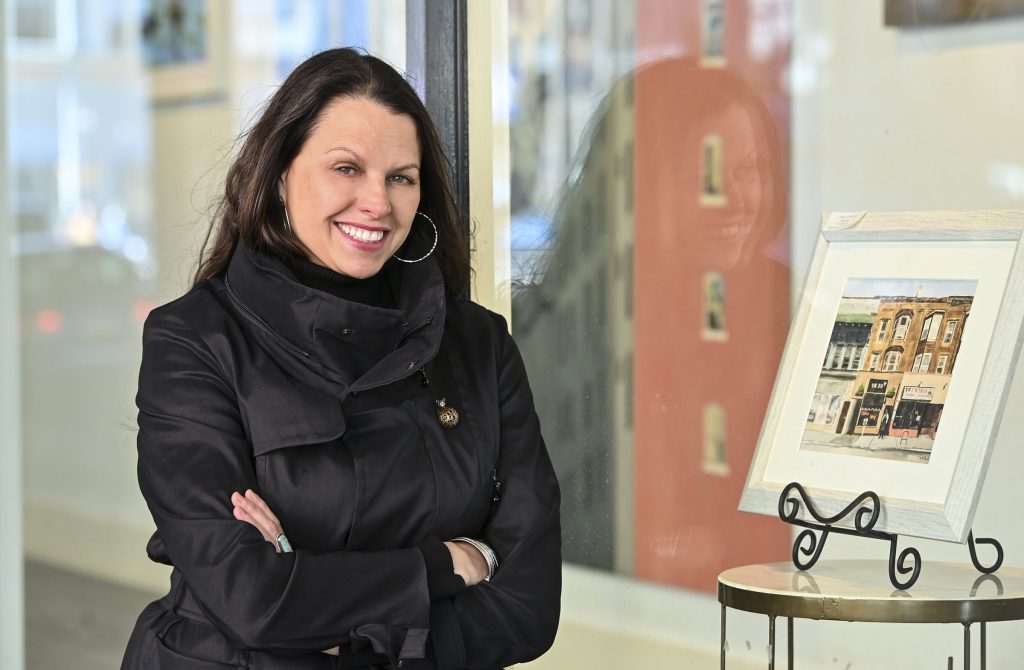 Clarks Summit creator captures life as she gives back to others

For Catherine “Trinka” Ravaioli, art surpasses the boundaries between people and ties a community together.

As the owner of graphic design and media company Grapevine Design and co-coordinator of Trinity Studio and Gallery, Ravaioli is immersed in the history of the Scranton art scene.

“Scranton is a real roots town,” said Ravaioli, who lives in Clarks Summit. “It’s got a realness, a character to it, all these little nooks and crannies. The downtown used to be really depressed, so it’s nice to see more artists come to the area. The city is moving in a great direction.”

Ravaioli began to pursue art as a potential career at 13. Following her graduation from West Scranton High School, she earned an associate degree in fine arts from Keystone College, where her mother, Charlotte Ravaioli, is chief of staff. She went on to earn a bachelor’s degree in art education from Central Connecticut State University, discovering only in her final semester that education wasn’t really for her.

Ravaioli moved back to Scranton and worked in the graphics department at The Times-Tribune. After a few years, she changed tracks yet again and became the art director of Thomas Communications, a full-service advertising agency in Clarks Summit. Finally, at the turn of the new millennium, Ravaioli decided to go independent.

“I wanted a change,” she said. “It was before I had kids. I figured it was now or never.”

The hardest part, Ravaioli added, was making the initial leap.

“I’ve been thinking lately about how people think being brave is the same as being fearless, but part of it is being afraid and making the leap anyway,” she said. “That’s a hard thing, and I see why people don’t do it, but I just felt like it was the time.”

In her art, Ravaioli often draws inspiration from scenes in her life, especially her children.

“I’ll see them in certain situations and want to capture it because it’s the essence of who they are,” she said. “It’s my truth. It’s what I live in and out every day, being a mom.”

Ravaioli also takes a lesson of simplicity from her kids.

“When you’re a kid, there’s a pureness and honesty that you start to lose,” when you learn proper art techniques, Ravaioli said. “I’m trying to come back to the essence of who I am in my art.”

In 2016, Ravaioli’s business got a boon when she was named a finalist in the Kickstart Art Challenge, sponsored by The Renaissance at 500 in downtown Scranton. It allowed her to open a gallery on Bogart Court for six months rent-free. She ran it for a year before passing it on.

“I’m glad I did it, because I learned it took more time as far as planning First Fridays goes and keeping the door open,” Ravaioli said. “Five years from now, I think it would have fit better, but I think sometimes in life you have to wait and see how things play out.”

“It’s working out really well,” Ravaioli said. “I don’t have to do it by myself. I can lean on (Noreen), and she can lean on me.”

In her spare time, Ravaioli volunteers for and serves on the board of Spring Hills Farm in Dalton. The farm, under the care of the Hull family since 1945, is fully organic, producing Jacob sheep wool, maple syrup and Christmas trees.

Ravaioli, however, loves it for its art workshops organized by artists Tim Hawkesworth and Lala Zeitlyn. Growing up in the area instilled a strong appreciation for nature in Ravaioli, and she attends the workshops whenever she can to return to her roots and brush up on her skills.

“You go on your own path. It’s a letting go of technique and more of doing art from your heart and soul,” Ravaioli said. “(The farm) is just a place I go to feel at peace and at home.”

Ravaioli also tries to give back to the Scranton community that has supported her all her life. After the late Brian Craig, who owned Scranton bar the Bog, was diagnosed with cancer in 2018, Ravaioli donated an original watercolor to a fundraiser for Craig. The piece, “Bog Brian,” sold for $600, with all proceeds going directly to him and his family.

Inspired by the community’s response, Ravaioli began selling prints of the piece to continue helping his widow and son; they are available at her website, trinkaravaioli.com/bogbrian.

“People started asking me if I had prints for sale,” she said. “(Craig) was a beloved bartender and figure at the Bog, and I’m glad I can help his family out.”

A print of “Bog Brian” is on display at the Steamtown Street Gallery on Lackawanna Avenue along with a few of Ravaioli’s original paintings, including a tribute to Scranton’s now-demolished Hotel Casey.

In addition, Ravaioli’s work will be on display at Wyoming Valley Art League’s Sandra Dyczewski Maffei Gallery in Wilkes-Barre through April 2 as a part of the organization’s “Her Story — Then & Now” exhibition. She will also exhibit her work at Three Hammers Winery Art Gallery in Hawley in May.

Ravaioli hopes the community will find something that speaks to them in her art.

“I can’t control the response to my art, which is a little scary,” she said, “but it’s a good way to grow.”