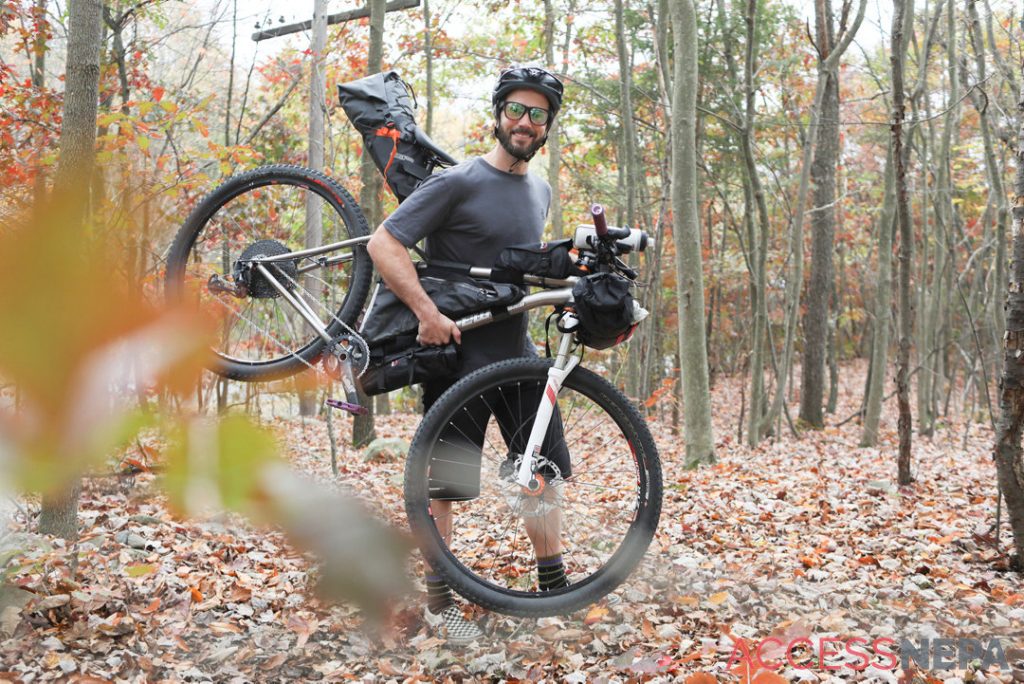 Jay Rogan reached the finish line with sore legs, numb hands, a sleep-deprived body and 580 miles behind him, all in the name of raising money for a local conservation group.

The Archbald resident placed third in the annual Adirondack Trail Ride this September, his first time participating in the race that takes cyclists through the woods and on a variety of roads and trails in that mountain range. Rogan, 40, hauled more than 50 pounds along the way, including his bike and supplies, and despite only having five weeks to train, he completed the trek in just over four days, 11 hours.

“There’s something really cathartic about this feeling of being outside and in nature, and it’s helping me right now,” said Rogan, who had decided maybe he should try something different, like the race. “I could spend time outdoors and also challenge myself. That was sort of the impetus to be like, ‘Maybe I should try to do this.’”

As a kid, Rogan explored his neighborhood on his bike and later got involved in mountain biking while studying at Penn State University. He traveled around Northeast Pennsylvania, improving along the way, and has steadily mountain biked for the last 15 years.

“It’s a very challenging sport, so I enjoy progressing and learning new things and challenging myself. … I really love mountain biking and kind of the culture that surrounds it,” Rogan said.In more recent years, Rogan, who has worked in software product management and with software developers, explored the West aboard his bike while living out of an Airstream trailer. From Arizona, to the Pacific Northwest, Rogan enjoyed immersing himself in the bike culture. He returned to NEPA with his dog, Cooper, during the pandemic and here he has worked with youth mountain bikers in the National Interscholastic Cycling Association, which has teams across the country. The local group includes kids from around 11 to high school seniors from across the region, Rogan said, and practices a couple times a week, weather permitting.

“There’s something rewarding about getting out and helping kids overcome challenges and getting better at riding bicycles while at the same time teaching them about physical fitness and enjoying the outdoors,” Rogan said.

And with a lot of kids stuck inside during the spring and summer thanks to the pandemic, he added, the local mountain biking league gives them a chance to get out in the fresh air.

“I think everyone is just grateful to be outside,” he said, noting that the rides also force him to ride at a different pace and pay more attention to what else the trails have to offer. “There’s this part of me that’s taking something I love doing and slowing it down along the way and enjoying nature. … There’s also a level of camaraderie among the coaches.”

While he had occasionally done bike races, Rogan said he’s not an extremely competitive person, so he’s just viewed cycling as a way to exercise and spend time outdoors with friends and his pup. A friend had competed in the Adirondack race, known as TATR, in 2016, and while Rogan had met him near the finish line, he didn’t consider ever competing in it himself.

As the race approached this summer, though, Rogan decided to give it a shot. He put together long, mixed-surface training rides along with shorter, more intense ones and some kettlebell training. 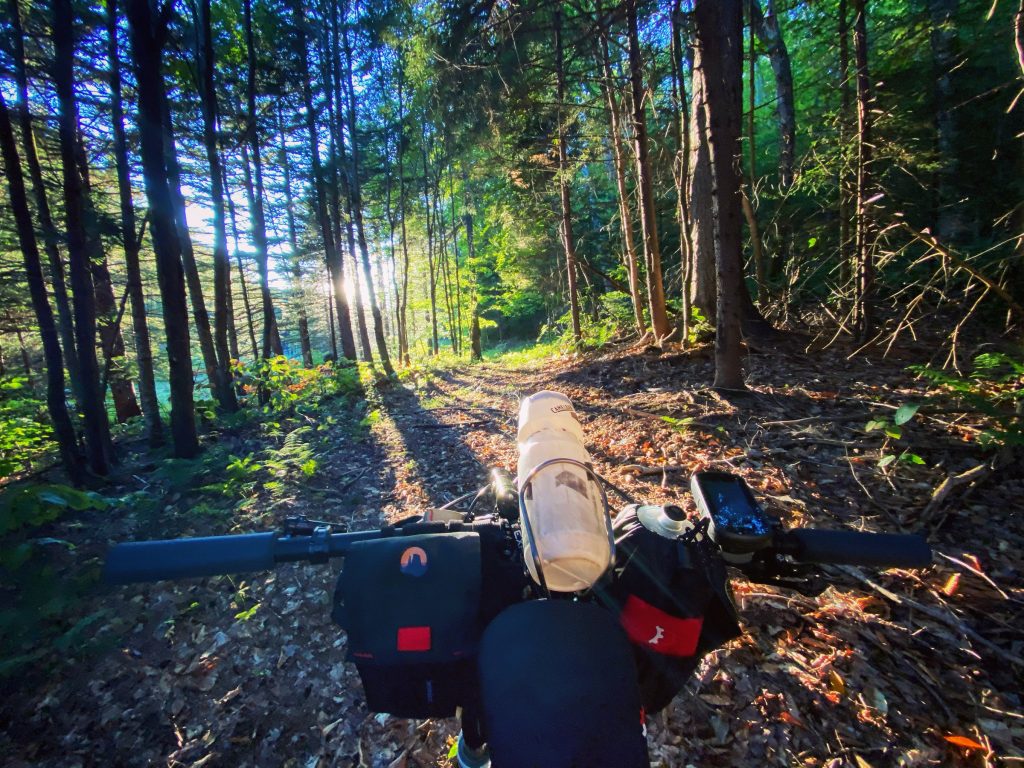 JAY ROGAN / CONTRIBUTING PHOTOGRAPHER
Jay Rogan shot photographs of some of the scenery along the way during the Adirondack Trail Ride in September.

In lieu of a race fee, organizers ask that participants raise money for charity, and Rogan pulled in $1,900 for Countryside Conservancy, a La Plume-based nonprofit that protects green space in Northeast Pennsylvania. Rogan has seen its impact firsthand, noting it has preserves near where he coaches kids at Lackawanna State Park and connects lands that let cyclists like him enjoy the outdoors. The conservancy creates “something for people to enjoy and travel upon,” Rogan said.

“They’re adding more preserves and building more trails every year, almost, and so I see what they’re doing and I see the way it effects those kids and all of those people who visit Lackawanna State Park,” he said.

Rogan also knows Countryside’s executive director, Bill Kern, and thought that it would be exciting to fundraise for the organization. The online fundraiser took off not long after Rogan set it up.

Kern was touched that Rogan used the race to raise money for the conservancy. He joked that he thought Rogan was “crazy” for taking on a task he described as “self-imposed torture,” but “I knew he was physically capable of doing it.”

“I’m familiar with the race, and I know it’s a massive undertaking — physically brutal, mentally brutal — and it really meant a lot that he would be riding it in honor of the conservancy,” Kern said.

Countryside Conservancy will put the money Rogan raised toward a state grant it received to buy a 55-acre property in North Abington Twp., which will tie into the trail system Rogan often rides at Lackawanna State Park. But more than just raising money, Kern noted, Rogan’s efforts created awareness about the conservancy and its mission. Kern estimated about 90% of the people who donated to Rogan’s fundraiser had never given to the conservancy before.

“Just to have that awareness that it creates — that exposure — it’s immensely helpful,” Kern said.

On Sept. 11, Rogan mounted his bike at Waterfront Park in Northville, New York, the start and eventual finish line of the race. He set out on his 10-year-old Eastern Woods Research titanium 29er hardtail, a bike he said weighs about 25 pounds. On top of all that, he had to haul clothing, sleeping gear, food, first aid supplies and tools.

“It’s a very cumbersome way of approaching the race,” he said.

TATR riders don’t compete for any prizes, but they do have a tracking device and are timed. Rogan didn’t set out to win, though — he just didn’t want to drop back.

“It’s a self-supported race, so that means there’s no aid stations, there’s nothing there to provide any assistance. … Once you’re out on the course, you’re just kind of by yourself,” Rogan said.

Around mile 50, Rogan started struggling. He felt like lots of people were ahead of him, and he began to feel physically ill thanks to some out-of-date meal-replacement bars he’d bought at a discount store. Nauseated, sweating and dizzy, he stopped at a town, threw away the bars, had some “real” food and focused on eating better from then on.

“I had to just come to this realization (that) I have to push through this. … The whole route was a bunch of adjustments in terms of expectations (and) comfort,” he said.

It helped, too, that when he pulled into a town around 11 p.m. that first day and turned on his phone. Texts from friends telling him to keep it up flooded in.

“I got all motivated,” Rogan said. “I’m not even tired. I’m just going to drink a coffee and ride until 2 or 3 in the morning.”

Rogan would usually bike from 4 or 5 a.m. until 1 or 2 a.m. the next day, catching a few hours of sleep along the way to re-energize. It came easier to sleep as the race wore on, he said, although one night he found spiders crawling all over him, and on another he got rained on.

Race organizers gave the riders a GPS file to track the route, which also would show them where they could find gas stations and such nearby. Rogan’s GPS stopped working the second morning of the race, and when troubleshooting didn’t help, he ended up having to navigate with his phone.

“Otherwise, I would have been out of the race,” he said.Rogan biked as much as possible, but the nature of the course meant he had to carry or push his bike at times. At one point, he and another rider, almost delirious with exhaustion, got lost in a complicated section. They ended up just plopping down for the night, shivering through the hours before finally making their way to a gas station to recharge the next morning.

Pushing through the woods at night left him feeling like an animal stalking prey, although the roles reversed when he discovered howling coyotes about 50 feet away from him.

“There is something about stalking through the woods in a dark … unfamiliar place lit only by a small light and trying to find a place to sleep and trying to navigate through dirt roads with houses and shacks along the way,” Rogan said. “There’s kind of a primal nature to it that’s kind of hard to describe.”

Even so, Rogan still had time to enjoy the scenery along the way and took photos to remember it all.

“This kind of takes you out in some very unpopulated areas, but they’re also very beautiful, and they look kind of different from the high peaks areas. There are more interesting bodies of water and vegetation and whatnot,” he said. “So I was able to definitely enjoy all of those, and that’s one of the things that keeps you going through it. You’re not sure what’s next, what’s the view going to look like.” 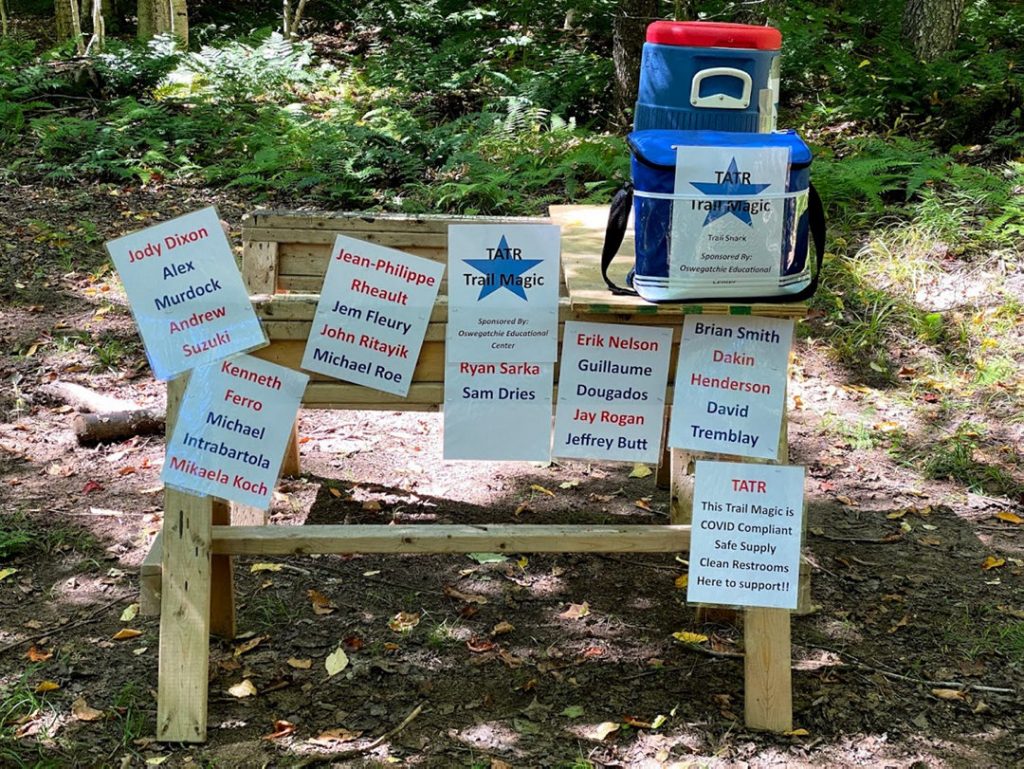 JAY ROGAN / CONTRIBUTING PHOTOGRAPHER
Signs cheer on Rogan and the other cyclists participating in the Adirondack Trail Ride in September.

Rogan’s bike held together and, for the most part, so did he. He finished with a lot of cuts from walking through brush, numb hands, and sore Achilles tendons and knees.

“I was not trying to set a record or anything like that, and I wasn’t sure how I was going to feel. … My goal was to just treat it like a big bike ride,” Rogan said.

While he saw a few people clapping for the riders along the way, Rogan was glad to find a couple of his friends waiting at the finish line with pizza and beer.

“I was ravenously hungry for over a week,” he said. “I was eating food constantly. I could not eat enough food.”

More than a month after the race ended, Rogan still felt some of the physical effects of the journey. He knows he could improve should he do it again, which he would. Races like this are gaining in popularity, he said, and he’s looked into doing some smaller events once he’s fully recovered.

“The whole course itself pushed me in ways I never imagined possible, so it was a pretty incredible experience,” Rogan said.