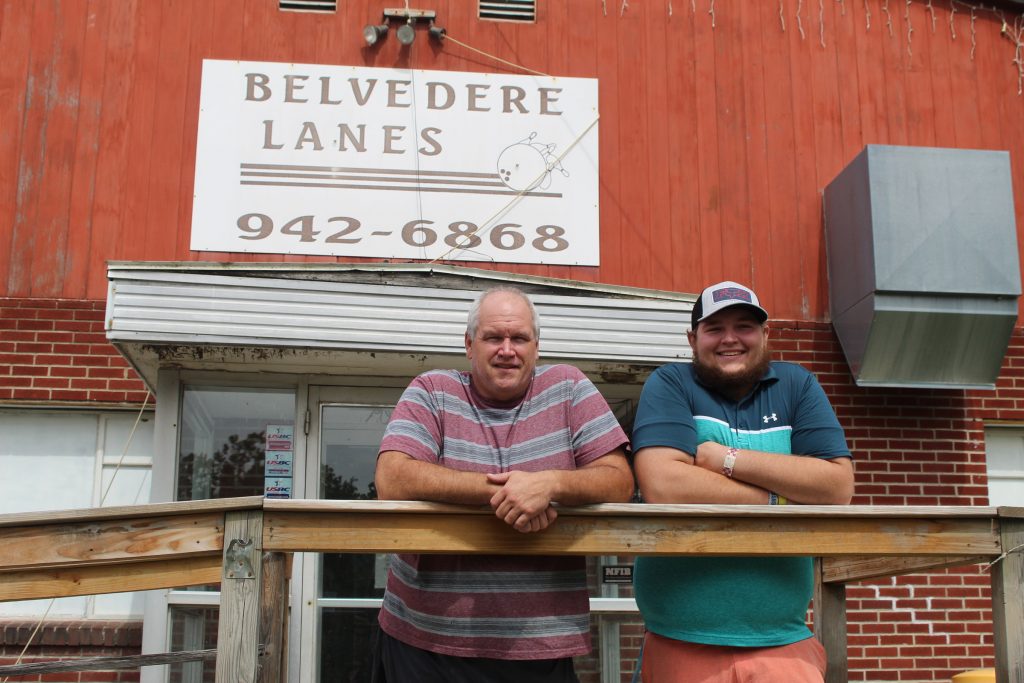 After rebranding Belvedere Lanes into an entertainment center following years of devastating floods that put bowling equipment in disrepair, owner Allen Loch plans to bring the lanes back this October.

Last month was the one-year anniversary of the most recent flood to rock the business.

“We had a lot of people asking if there’s any way we could possibly come back,” Loch said.

The bowling alley has suffered flooding four times because of its close proximity to Martins Creek, first in 2006, then again in 2011.

Replacing the electronic equipment proved to be a costly venture each time.

The building took on water twice last year, leading to Loch’s tough decision to clear out the lanes permanently.

In early 2019, Belvedere began offering pool, indoor corn hole, darts, a golf simulator game, air hockey, indoor mini golf, foosball, shuffleboard and card games with the idea that this equipment could be easily moved to a dry space in the event of a flood.

“The entertainment side has been doing well, so instead of putting in 10 lanes, we’re going to put in six. We’re going to kind of meet the middle,” Loch explained. “We’ll be able to run small leagues every night, and then on the weekends have our open play as we used to do.”

The threat of flooding has obviously not disappeared, but this time around, Loch feels confident that future damage to the bowling equipment could be prevented.

“We’re going to spray foam about half of the building on the outside where the water would always come in,” he explained. “We’re also going to use some concrete barriers.”

This method proved itself successful last year on a section of the roof that constantly leaked.

“It got me thinking, why can’t we put that four feet up the side of the building to make it watertight?” Loch said.

The new bowling lanes are expected to be up and running by Oct. 28.

“That’s going to give us a week to tweak and do some adjustments that we may need to do, and as of right now, we’re looking at starting leagues on Nov. 4,” he said.

Normally, bowling season lasts 30 weeks or more, but Belvedere leagues will go for 20 weeks until March at first because of the late start.

Loch plans to offer men’s, women’s and mixed leagues, as well as a league for people ages 55 and over.

In the new year, he may consider running a 10-12 week junior league on Saturdays if the interest is there.

League reorganization meetings have been going on at Belvedere since Monday, with the men’s leagues meeting on Monday and Tuesday night.

The women’s leagues meet tonight and tomorrow at 6:45 p.m.

Anyone unable to attend league meetings can still get information about joining a league by calling 570-942-6868.

The golf simulator will also pick up again during the first week of November for 20 weeks.

The general consensus among people about the changes at Belvedere has been excitement, Loch said, especially with this area not having a ton of options for bowlers.

Most patrons understood his decision to close down the bowling area, but still felt disappointed nonetheless.

“It seems everybody is gung-ho and forward and can’t wait to get back to bowling,” he said. “Basically, you either have to go from here to Scranton and as far north as Binghamton right now to bowl.”

Belvedere Lanes first opened on Walnut Street in Nicholson under Loch’s grandfather in 1960.

In 1990, Loch became the third generation to take over the business.

His 21-year-old son Matthew Loch may take the lead one day as well.

Growing up with the lanes, the younger Loch said he felt “ecstatic” after learning there was a way to bring bowling back.

“I’m more excited for my son than I am myself,” his father added. “He enjoyed the sport forever and he was brought up with it as I was. Now that we’re pretty confident we can keep the water out, it’s just a win-win for everybody.”