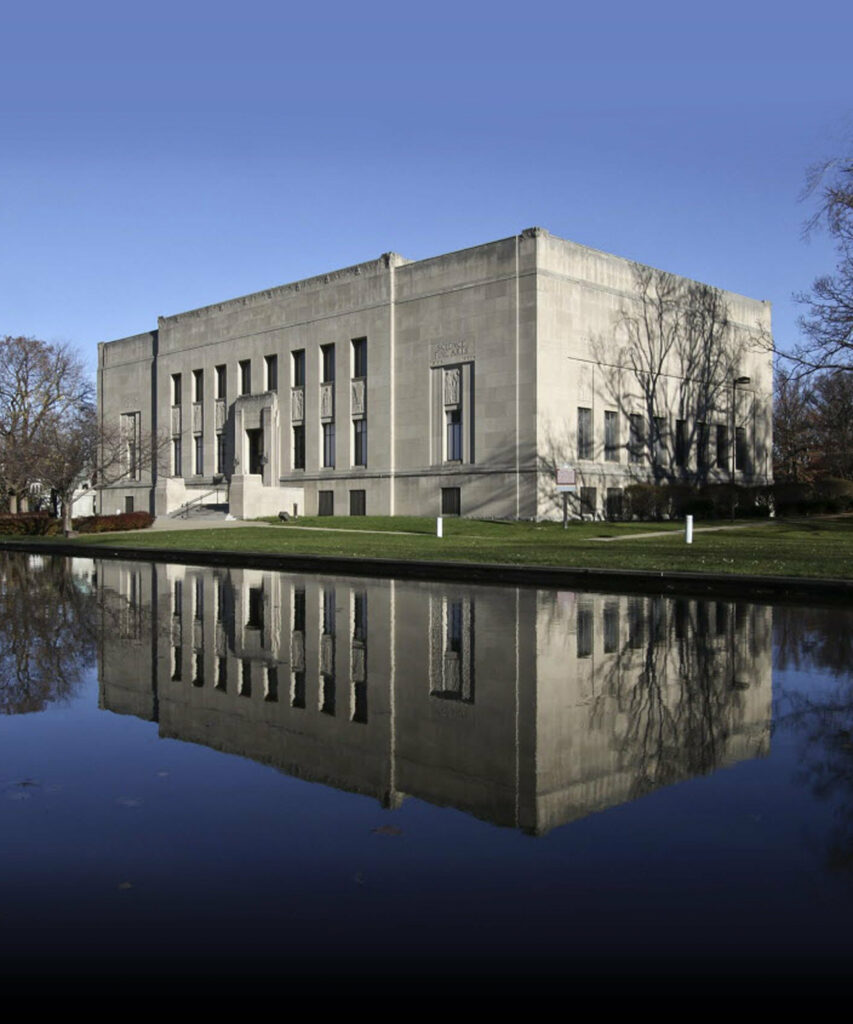 10 things that might surprise you about Scranton’s Everhart Museum

Countless visitors have passed through the front doors of the Everhart Museum, taking in the sights of exotic birds, the remnants of dinosaurs and the work of some of the world’s most renowned artists.

But while some of its artifacts are quite literally set in stone, the Scranton museum itself is not. While embracing its history, the Everhart, 1901 Mulberry St., also has welcomed several changes in recent years, with more ahead.

Here are 10 things you might not have known about the Everhart Museum.

When the Everhart recently underwent a series of renovations, the changes opened up more space on the museum’s first floor for student learning.

The gallery that formerly housed folk art has been revamped into Gallery 7, which can host art exhibits but also can be cleared out and transformed into classroom space.

This summer, students took advantage of this space as well as the adjacent existing classroom during the Museum Adventure Weeks camps. The spaces not only boast new furniture but also gives kids’ more space to be inspired, said Sarah Sutton, the museum’s manager of educational programs.

“It’s wonderful because the students can have this whole educational wing,” she said.

Celebrate the special moments in your life surrounded by some of the region’s, and world’s, top artwork.

The Everhart is now allowing the public to rent the facility for events such as weddings and showers.

“Rental of the property is a really good string of revenue for us,” said Kathy Bell, the museum’s director of development and marketing. “First and foremost we are a museum, and we respect that, but just going out and asking for donations doesn’t always work.”

The museum recently hosted a shower and a wedding, the latter of which used several parts of the site, including holding a silent disco in the bird room.

The Everhart has a list of preferred vendors it works with for such events since it does not have a kitchen on site, Bell noted. Anyone interested in holding a special event there can contact her at 570-346-7186 or development@everhart-museum.org.

The museum’s physical transformation will continue in stages in its first-floor natural history wing, where the “bird room,” which has long housed founder Isaiah Everhart’s collection of taxidermied birds, will be revamped. The room’s windows will require an estimated $50,000 to $80,000 worth of work, Bell said, and many of the birds need to be fixed and restored.

The adjacent rooms that house fossils, rocks and minerals also will be updated to maximize space and improve their presentations, curator Francesca Saldan said.

“We’re looking to modernize and update,” she said.

The museum hopes to receive state funding for the capital improvements but also will raise money to help cover the bills, Bell noted.

As times change, so do the museum’s fundraisers.

The Everhart jumped on the farm-to-table movement early when it presented its first such dinner on its lawn several years ago. But as those types of events gained popularity and poor weather impacted farmers’ crops, the Everhart looked to change up its fall fundraiser.

This year, the museum will hold its first Diwali party, set for Friday, Sept. 17, from 6 to 9 p.m. Buddhists, Sikhs, Hindus and Jains celebrate the “Festival of Lights” each year, marking the triumph of not only good over evil but also knowledge over ignorance.

Guests are encouraged to wear brightly-colored clothing as they indulge in food from Epicurean Delight. Tickets to the 21-and-older event cost $125 and are available at everhart-museum.org.

The following month, 20 guests ages 21 and older will have a chance to investigate the paranormal within the museum’s walls when the Everhart teams up with a local paranormal association for a public ghost tour on Saturday, Oct. 26.

Other activities the Everhart has in the works include a “Mystery in the Museum” event, a program with the Northeastern Pennsylvania Philharmonic and a movie screening program.

Tucked in the lower-level gallery, aka Gallery 1, the Zine Library celebrates creativity. Organized by type and level of age appropriateness, the zines — short for “fanzine,” a small-batch magazine usually published by its author/artist — as well as chapbooks and other small publications are on display by the Everhart’s offices.

The museum accepted zine donations from the community and opened the library late last year. The collection includes such genres as art, music, humor, comics and culture. The museum does not allow the zines to be taken out, however.

While the collections and exhibits on display remain a big draw for museum guests, the Everhart also extends its influence beyond its walls through numerous community programs.

Recently, the museum partnered with the Women’s Resource Center, which serves people in Lackawanna and Susquehanna counties, for a workshop called “Surviving and Thriving.” People receiving help through the center created artwork with the guidance of its staff plus artist-in-residence Gina Rice to help them confront their experiences with physical and emotional trauma and deal with the emotional effects. Several of the pieces, made of fabric and embroidery, are on display in Gallery 1 through December.

Additionally, the Everhart offered art therapy to select residents of Wesley Village, a United Methodist Homes assisted-living facility in Jenkins Twp., through Everhart Connects. Residents with dementia and early-stage Alzheimer’s disease worked with artist-in-residence Elizabeth Faist to talk about art, listen to music to spark memories and create art related to the Everhart’s collection. Their work, too, is now on display in Gallery 1 through the end of the year.

Other programs the Everhart has offered include a senior arts club taught by noted local artist Earl Lehman; a Maker’s Workshop Series, in which adults can try traditional crafts; weekend classes for young artists; and after-school programs for students in kindergarten through grade 12.

“Research studies show that people who experience the arts are healthier and better educated than in similar communities,” Bell said.

A wide range of artwork fills the second-floor galleries at the Everhart, including work by artists with local ties, such as painter John Willard Raught; modern pieces by Hunt Slonem; and other works from the museum’s own collections and visiting exhibits it brings in throughout the year.

But one display Saldan does not believe a lot of people realize exists is the collection of Dorflinger glass, found adjacent to the local artists’ gallery. The Everhart has numerous pieces crafted by Christian Dorflinger’s business, which produced works for dignitaries, including American presidents, and the wealthy during the 19th and 20th centuries in White Mills, Wayne County.

That spot today is home to the Dorflinger Glass Museum, but the Everhart acquired “an important collection of Dorflinger glass” in 1969 with the help of the Museum Association of Scranton, according to its website. Today, visitors can view numerous examples of Dorflinger’s work right in Scranton, including not only traditional glasses and dishes but also vases and other stylish pieces.

“There is a ton still in storage,” Saldan said, noting how many museums typically can display a small percentage of their collections. “We definitely don’t show everything.”

Horn’s 1970s-era abstract sculpture, “Red Wing,” made from triangular steel forms, formerly was on display on Lackawanna County Courthouse Square. Soon, it will relocate to the Everhart’s side yard toward the front of the building, according to Bell.

Earlier this year, county commissioners unanimously awarded a $48,000 contract to Scranton-based Reclamation Industrial Furnishings, which was to refurbish and move the sculpture from behind Piazza dell’ Arte on the square to the museum.

Horn was born in Scranton in 1920 and graduated from Central High School and the Tyler School of Fine Arts at Temple University. A gallery at University of Scranton bears her name, and the Everhart currently has some of her work on display in a second-floor gallery.

For more than a decade, members of the community have gathered at the museum to embrace a different form of art — the written word.

Everhart Reads, the museum’s book club, meets on the first Thursday of every month (except in January and July) at 6 p.m., discussing book that relate to content at the museum. Participation is free.

To register for the group or to join its email list, contact the museum’s programs department at 570-346-7186, ext 516., or education@everhart-museum.org.

If inspiration strikes, indulge your creative side at the Everhart’s open studio.

Located on the first floor by the museum shop, the studio offers the public a chance to come by and make their own artwork. It has different kinds of supplies available and is open to all ages. The open studio opened at the end of last summer, Bell said, and numerous pieces people have contributed since then now decorate the space.

“You come by and see kids all the time, and even adults,” Bell said, adding, “It’s starting to get to that point where it’s another place to go, and it’s different. And we like that.”

The studio is open Mondays, Thursdays and Fridays from noon to 5 p.m.; Saturdays, 10 a.m. to 5 p.m.; and Sundays, noon to 5 p.m. Guests can take home their artwork or leave it at the museum.