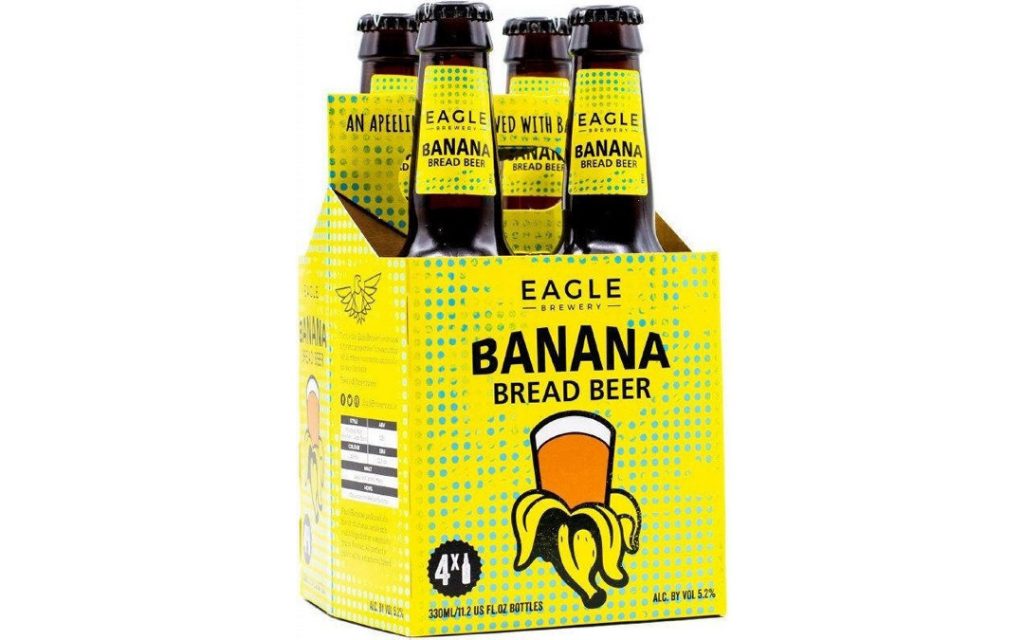 Yes, I know that good ol’ Punxsutawney Phil popped out of his house and saw his shadow, which means we have more weeks of winter on the way. But if you look close enough, you can see the light at the end of the tunnel. It’s a little dim light, but I can see it through the fog and snow. So with winter finally looking like it is getting ready to wrap up, I plan on trying a few more winter brews before putting them away for the year and moving on to lighter, more spring-style beverages, like the lager I’m reviewing this week.

When I think of spring, I think of flowers and fruits, and while I am a big fan of many fruits, one of my favorites since I was a little guy is certainly banana. I like most things banana —banana bread, banana muffins, banana cake, banana cookies and all other things banana.

This week, I tried an imported beverage from England’s Eagle Brewery called Banana Bread Beer, and its beauty is in the simplicity. The yellow label features a peeled banana at the center, but instead of fruit inside the peel, there is a pint of beer. That was a nice little touch.

Eagle Brewery has changed hands and names a few times, but it lauds itself as a craft brewery that takes pride in its high-grade ingredients. This particular brew was crafted with natural mineral water, fair-trade bananas, and fresh malts and hops.

The pour was extremely nice, with a thick head on top of a pale, golden brew. Nice bubbles pervaded the liquid, and it settled well into a tall glass. The aroma was exactly what you would expect, with a pleasant banana scent. The first sip was all banana, and that remained the same throughout the session.

A fruity and sweet beer with a low bitterness, it had a thin mouthfeel, as is expected from a lager. Hints of malt and spice balanced out the banana, and it was an enjoyable drink from start to finish. The head stayed with the drink the whole time, and the legs held onto the glass all the way down. The brewers did a great job crafting this beverage.

This beer clocks in at just 5.2% ABV, so you can enjoy a few glasses at once, making it appropriate for a solo session or to share with others. I enjoyed this brew, a change from the heavy stouts I’ve tasted for the past several months. Sometimes a change is nice.

If you are a fan of fruity brews, especially banana, I would recommend giving it a try.