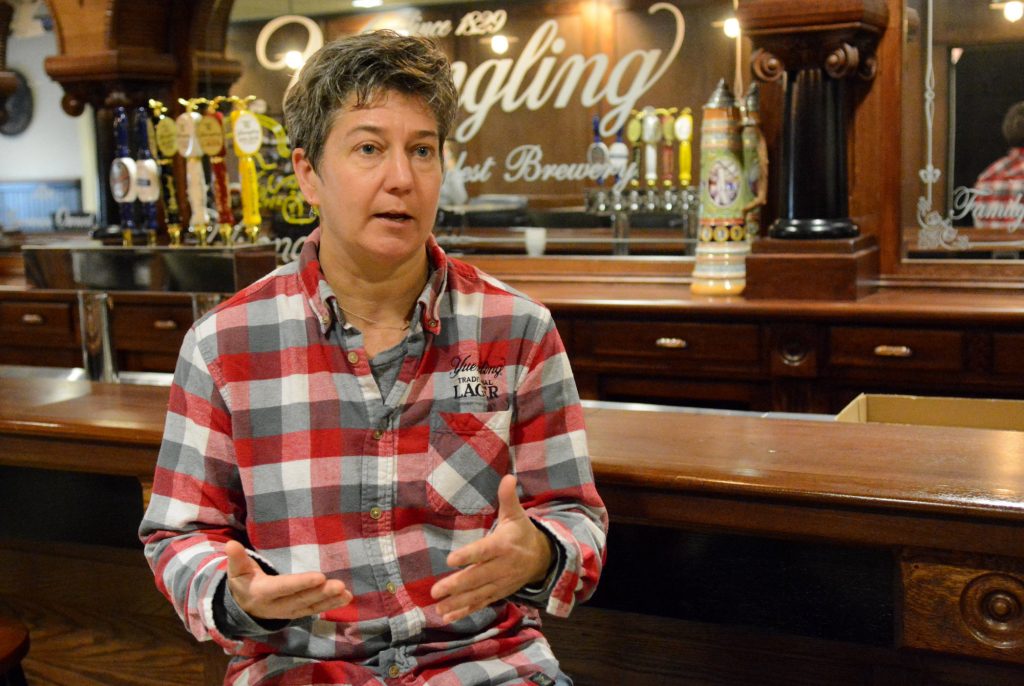 Yuengling to roll out upscale light beer this week

While the look of the product remains under wraps, Jennifer Yuengling, vice president of operations and part of the sixth generation of the Yuengling family, sat down for an exclusive interview with The Republican-Herald Friday about the timing of creating the latest brand and the opportunity for customers craving a refreshment beverage in that lane.

“This particular innovation was a little bit of a challenging one, because there’s not a lot that goes into it in terms of different ingredients. The challenge was more to hit the stats — hit that low carb, that 2.6 grams of carbs, the alcohol content being 4.2% ABV, and the low calorie, which is a 95 calorie brew,” she said.

The company’s brewing team worked on development for at least nine or 10 months. It has a different fit than Yuengling’s other two light beers on the market, Light Lager and Premium Light, according to Yuengling.

“Overall, we feel like this will be raising the bar and giving a more upscale image, and has a great flavor to it as well. When you get to a beer that’s this delicate, there’s not a whole lot to it. To reach those lower stats, with the low carb and the low cal, you’re not going to get a whole lot of flavor, but we’ve really accomplished that in having some good, crisp, clean refreshment to the flavor profile.”

A couple factors come into play when deciding when to launch a new innovation or new product, according to Yuengling. Typically, new brand innovations come out when stores are redoing their shelf space, or “sets.”

“Number one is to hit the spring sets in convenience stores and national accounts. So, that could be Walmart, Wegman or Costco, where they turn their sets in the spring and the fall,” Yuengling said.

“Also, this is going to be a great summer drink. This is for outdoor activities, active lifestyles, athletes who hit a personal accomplishment, something like a good beer after a long run or a hard workout. So we’re hitting that time frame too,” she said.

The company started sending out some promotional materials and its sales team has been out actively, she said.

“We’ve done some preliminary work over the last several months of getting samples out to our wholesalers, out to our buyers, so that they have an idea of what they’re buying into,” she said.

Next week’s run of Flight will be roughly 5,000 barrels worth at the Mill Creek facility; and roughly 3,000 barrels in Tampa. It will initially be available in 12-ounce bottles, both 12-pack and six-pack.

Yuengling will roll out the new, year-round brand in early March throughout its entire 22-state footprint.

“As we build the brand, we’ll roll out in 12-ounce bottles, and then expand into draft, and then into cans. It’s a slow build, so we’re building the brand.

It’s ambitious to roll out with a full product launch in your entire footprint.

“The numbers coming in are very aggressive — the orders that have been coming in. To be doing that out of just two facilities, it takes a lot of coordination.

We slowly build it, until we get the pipeline filled, get consumer excitement ramped up, and then bring other SKUs into the mix,” Yuengling said.

Flight will be at a slightly higher and a more premiumized price point than Yuengling’s regular core portfolio. It is a great complement to the existing portfolio brands, she said.

“We’ve lived off of our core brands, which are our Lager, our Light Lager, our Black & Tan, and introduced Golden Pilsner a couple years ago. Now, this sets the bar a bit higher with the Flight brand.”

The response to Flight so far has been very positive. “There’s excitement among our folks to actually get this on the packaging line next week and start rolling out the door. When we start up our production line on Tuesday morning, we’ll be packaging that brand, and we expect to have all of it sold within the first week or so.”

Images of the packaging have been found on social media.