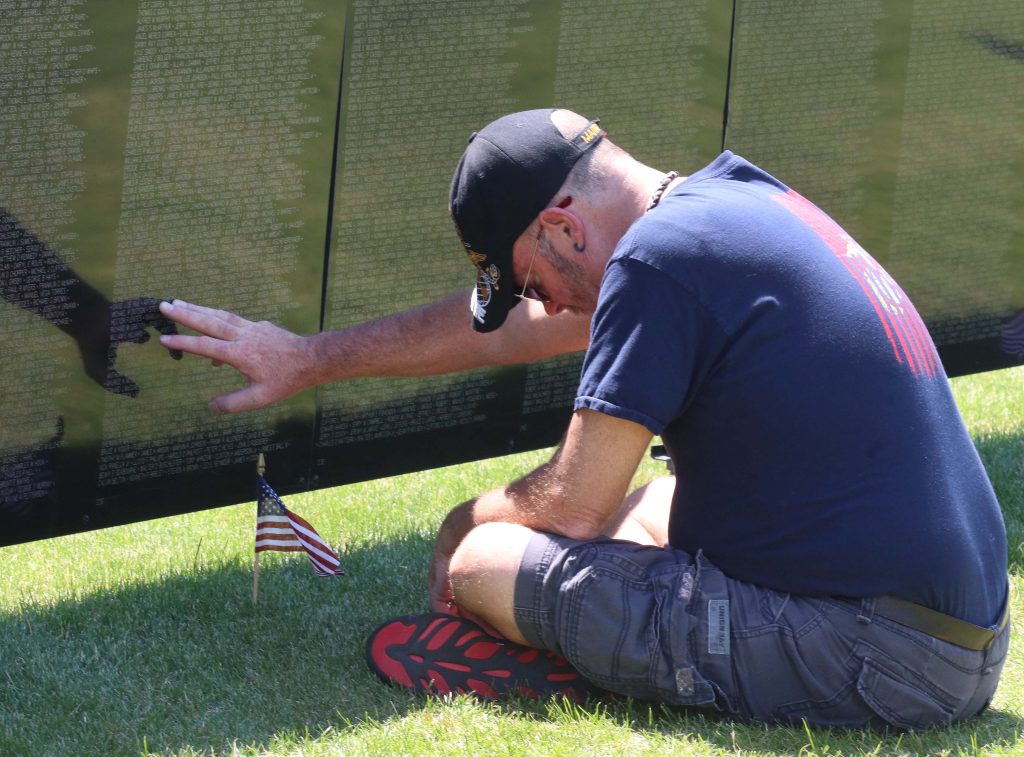 Plymouth is ready for The Wall That Heals.

Main Street is lined with flags and utility poles are decorated with red, white and blue bows.

The Wall That Heals, a replica of the Vietnam Veterans Memorial Wall in Washington, D.C., is slated to arrive today in Plymouth at Wyoming Valley West High School.

The wall will be escorted by police — and a bunch of motorcyclists — from the Mohegan Sun Arena in Wilkes-Barre Twp., starting at 4 p.m. today.

Organizers are asking area residents to line the route to pay respects to the procession.

Upon leaving the arena, the parade of vehicles will travel down Highland Park Boulevard to Mundy Street and then take a right toward Kidder Street. The vehicles will turn left on Kidder Street, then continue down the road before making a right on Conyngham Boulevard, followed by a left onto Wilkes-Barre Boulevard. From there, the procession will make a right on Market Street in Wilkes-Barre, go around Public Square, and down Market Street into Kingston. The parade of vehicles will turn left on Wyoming Avenue and continue until it reaches the high school at 150 Wadham St. in Plymouth.

A “soft opening” of the wall is scheduled for 6 p.m. Wednesday. Starting Thursday morning, the wall will be accessible around-the-clock to the public through 3 p.m. Sunday.

“It’s not just for Plymouth, but for the county and the people across the state of Pennsylvania,” Peters said.

The traveling wall, a three-quarter size replica made to look like the permanent memorial in Washington, D.C., will be on display on the grounds of Wyoming Valley West High School from Sept. 5-8. It is free and open to the public. The wall last came to the area in June 2017 near the Swoyersville American Legion.

Peters, an Army infantry soldier, was wounded twice in Vietnam and received the Purple Heart medal.

The names of the more than 58,300 U.S. troops killed during the Vietnam War are on the wall, including Peters’ nephew David Lee.

While Peters, 69, the youngest of 17 children, was Lee’s uncle, they both were 18 years old when they served in Vietnam around the same time.

After Lee was killed, Peters was allowed to leave Vietnam, greet the arrival of his remains at Dover Air Force Base in Delaware and escort the remains home.

Plymouth Councilwoman Alexis Eroh said the borough is honored the host the wall.

“Bringing the Wall that Heals to Plymouth is significant because it allows us to honor those from our community who made the ultimate sacrifice and provide their loved ones with a healing moment of appreciation and reflection,” Eroh said. “Plymouth is such a patriotic community and this wall has brought the town together to proudly support this event, from fundraising to bow-hanging on Main Street. Personally, it has been an honor to support Clyde through this journey and I am grateful to be a part of the events of this historical upcoming week.”