The City of Scranton is holding a competition to replace the 54-year-old design on its current official flag.

Mayor Paige Cognetti announced today that the city is looking for residents to submit simple designs that could be drawn from memory and which should include shapes and symbols representative of the city. The flag’s new design also should use the current flag’s colors of dark blue and yellow or gold.

Submissions “will be considered donations to the Scranton Flag project. No concepts will be copyrighted. Any final design will be open for public use,” according to the mayor’s announcement. The selected design may be altered by a graphic designer working with the city, the announcement noted.

The current flag was adopted in 1966 as part of a contest as Scranton prepared to mark its centennial. The final design, submitted by William Kozy, features a fern leaf and two atomic-age symbols along with the city’s name and date of incorporation.

That flag replaced the city’s first one, adopted in 1907 so the city could be included in the United States flag gallery at the Jamestown Exposition that year. Victor Burschel of Dunmore won the contest to design the flag, a painting emphasizing the city’s industrial heritage with a colliery prominent along with smokestacks and a locomotive. 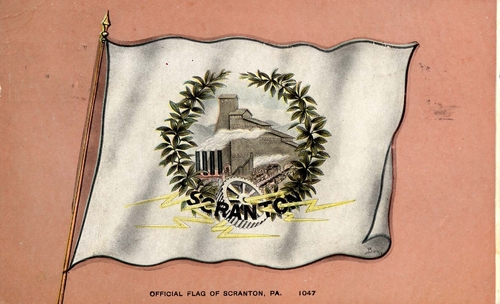 For more information about the current contest, visit the mayor’s Facebook page.

Check out this article from March 19, 1966, dealing with the adoption of the current city of Scranton flag: