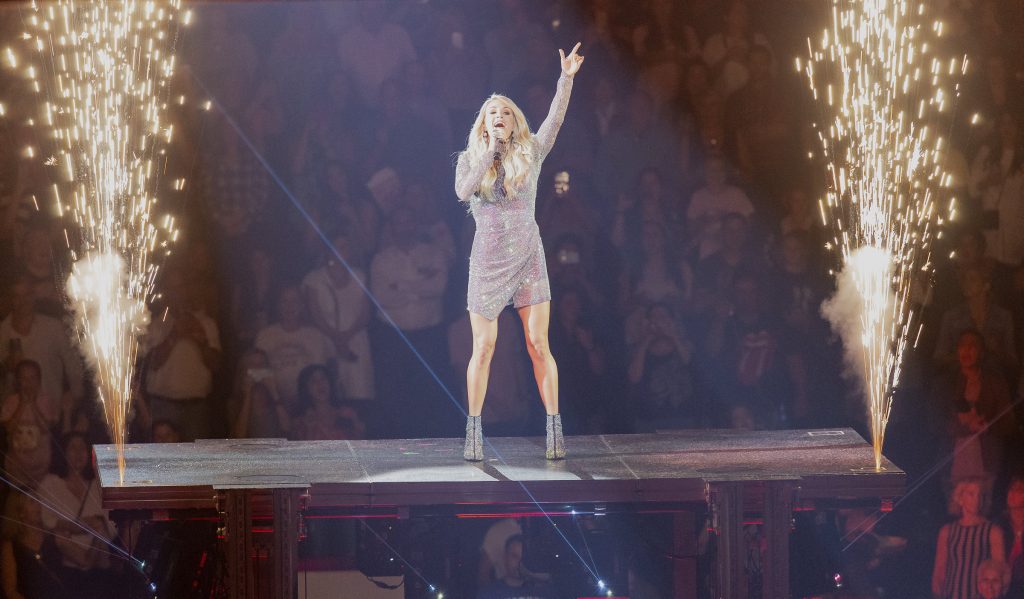 The reigning queen of country music is returning to Allentown Fair.

Carrie Underwood, a seven-time Grammy Award winner who has had 16 No. 1 hits, will headline the fair’s grandstand at 7 p.m. Sept. 4, it was announced Monday.

Underwood’s top ticket price sets a record for the fair. After resisting breaking the $100 mark for years — top prices for Sugarland in 2018 and Keith Urban in 2017 both topped out at $99 — the fair broke the milestone for Miranda Lambert last year at $109.

But Underwood represents one of the most in-demand talents the fair has landed. All six of her albums hit No. 1 on the country charts, and all went platinum except her most recent — 2018’s “Cry Pretty,” which went gold. Every one except “Some Hearts” and 2015’s “Storyteller” also hit No. 1 on Billboard’s overall albums chart.

Underwood is the second of six acts to be announced for the fair, which runs Sept. 1-7. Tickets remain on sale for Toby Keith with guests Matt Stell and Laine Hardy on Sept. 3.

She also played to a near-sellout of about 10,000 at Allentown’s PPL Center in 2016 in what may have been the arena’s best concert. Underwood sold out the former 6,500-capacity RiverPlace stage at Bethlehem’s Musikfest in 2006.

Underwood’s career started when she won the fourth season of “American Idol” in 2005. Her debut album, “Some Hearts,” became the fastest-selling country debut album in Nielsen SoundScan history and was Billboard’s Top Country Album of the last decade. It has sold more than 7 million copies.

In all, she’s sold more than 20 million albums in the United States, putting her in the Top 20 of best-selling country music artists of all time. She’s also the best-selling artist in “American Idol” history and the fourth-biggest album seller among artists who debuted in the past decade.

Since her first single, “Inside Your Heaven,” hit No. 1 and went gold, Underwood has had 32 songs that went gold or platinum, including duets with Brad Paisley and hitmaker Miranda Lambert.

She’s sold more than 40 million singles in the United States. Among her biggest hits are 2005’s triple-platinum “Jesus Take the Wheel” and 2006’s five-times-platinum “Before He Cheats,” both Grammy winners for Best Female Country Vocal.

Her hits that have earned Grammys include “Blown Away,” “Last Name,” “Oh Love” with Paisley and “I Told You So” featuring Randy Travis.

She also has won nine Country Music Association Awards, including 2018’s Female Vocalist of the Year, and 14 Academy of Country Music Awards. In 2007, she became only the second country artist in history to win the Grammy Award for Best New Artist.

Rolling Stone magazine called her the female vocalist of her generation in any genre and Billboard magazine “country music’s reigning queen.”

In November, she hosted the CMA Awards for the 12th consecutive year.

This year, she’s scheduled to publish her first book, “Find Your Path: Honor Your Body, Fuel Your Soul, and Get Strong with the Fit52 Life,” a fitness lifestyle tome.