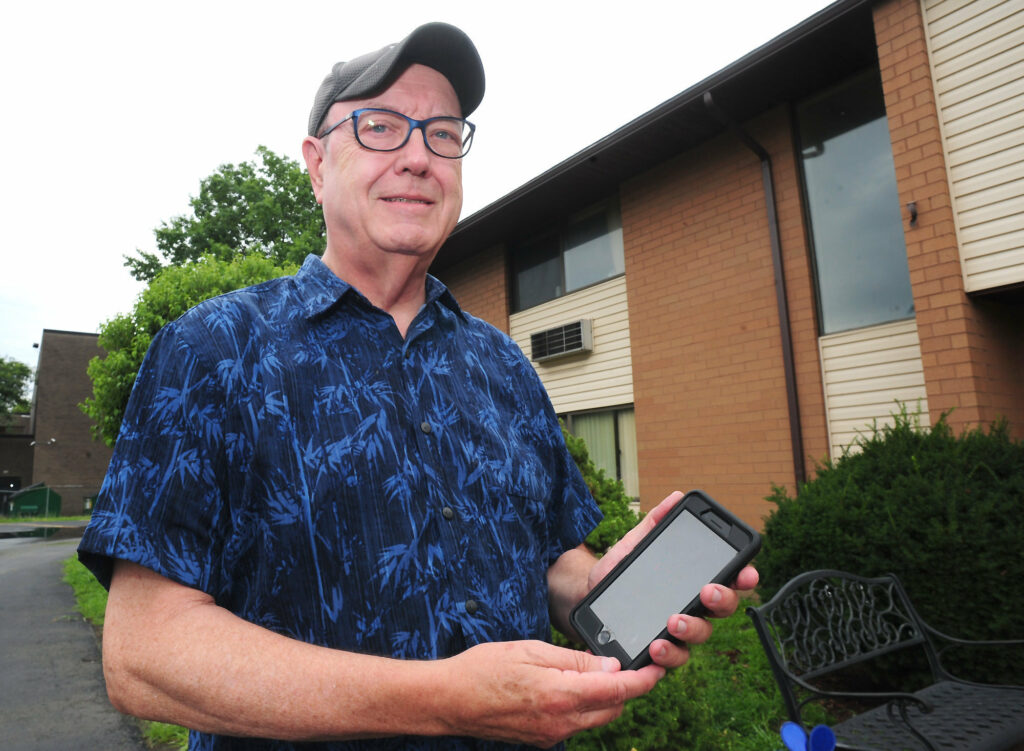 John M. Holmes has enjoyed a lifelong affinity for works of fiction and movies. Both genres enriched his skills as a teacher at Bishop Hoban High School, Wilkes-Barre.

But Holmes tarried when it came to challenging himself to take pen to paper and writing his own stories, books or scripts. The “pen to paper’’ cliche is fitting, too, in that Holmes is only now getting into the word processor phase of his life.

Remarkable but true, Holmes has written his first trilogy of short stories and he did it on a hand-held device. The short stories, “Three Dark Jewels,” are available via Kindle. A paperback version is on the way.

Holmes, 72, resides in Wilkes-Barre in an apartment not far from Holy Redeemer High School, successor to Bishop Hoban. He taught English for 37 years, including literature, grammar and writing, impacting the lives of countless students.

Holmes said he began reading as a youngster, finding particular appeal in the story-telling aspect of fiction. As a teenager, he worked as an usher at the former Comerford Theatre on Public Square in downtown Wilkes-Barre. Movies, and the stories they told, fostered his decision to major in English at King’s College after graduating from Sacred Heart High School, Plains Twp. A master’s degree in English and education was earned at Wilkes College.

He taught for a few years at Doylestown High School, but was hired to teach English at the new Bishop Hoban High School on South Pennsylvania Avenue in Wilkes-Barre. The Agnes Flood of 1972 damaged the building, which did not open until 1973, forcing the freshman class to utilize the former St. John’s School on North Main Street. “That’s where I met my first Hoban class,’’ Holmes recalled.

Holmes did take a few stabs at writing, including a science fiction screenplay that he sent to an agent in Hollywood. He did a play that, while not performed, earned a reading at King’s College.

Finally, in retirement, Holmes was encouraged with gusto by friends Don and Peggy Fedor of Hookset, New Hampshire, to start writing. Rather than pen and paper, his trilogy was produced using the small keypad on an iPhone.

The short stories, or novellas, are dark. “These are not feel-good kinds of things,’’ Holmes explained, “but they are entertaining and fast-paced.”

The first piece, “Old Poison,’’ is set in 1960s suburbia. Lylah has struggled to hold her marriage together and then gets a negative doctor’s diagnosis. Troubling memories from the past and an antique family artifact all join together on one awful night in the hospital.

“Dash’’ is set in the same suburban town in the 60s. A young librarian asks a patron, Bea, for a date. Gradually, Bea gets into a relationship with Dash, a friend of the librarian. Dash makes an effort to flee to Canada to avoid the military draft. Other involvements lead to sinister dots tying together in a strange mystery.

In “Dr. Henry Jekyll’s Graveside Services,’’ a new twist is given to an old tale. John Poole, Jekyll/Hyde’s butler, is the key figure in a grisly adventure that comes on the night after Jekyll’s burial. A young Scotland Yard detective is involved.

Holmes said he has other ideas for movie scripts and stories and he will do more writing “if everything comes out right’’ on the trilogy effort.

Peggy Fedor did the cover for “Three Dark Jewels’’ and the Fedors continue to encourage the author. Don Fedor is “tech-savvy,’’ the author explained, and will undoubtedly encourage Holmes to produce future works on a conventional computer, rather than a hand held device.