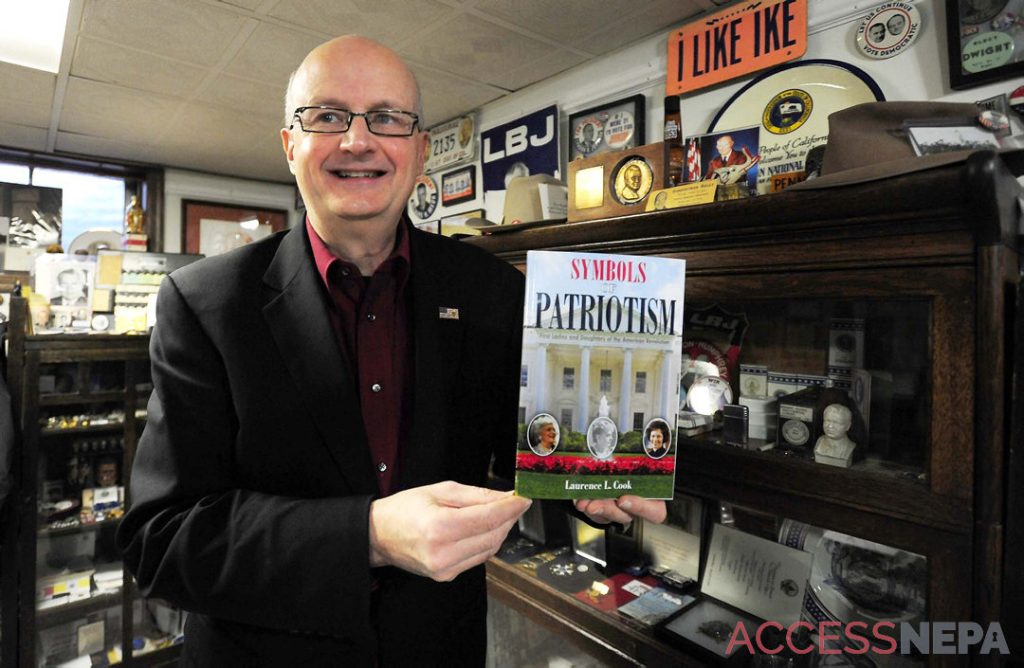 When local presidential historian Dr. Larry Cook gave a presentation to the Wyoming Valley Chapter of the Daughters of the American Revolution two years ago, he noticed something.

In preparing for his talk, the Dallas resident delved into his extensive personal archive of presidential memorabilia and discovered five former first ladies who were members of the DAR. He made that the focus of his presentation, and the topic proved to be extremely popular with the group.

Later, while speaking to several historian friends about first ladies who were affiliated with the DAR, they were all interested and even suggested to Cook that he should write a book.

Today, after more than a year of intensive research and manuscript drafts, Cook’s book, “Symbols of Patriotism: First Ladies and Daughters of the American Revolution” was released by Vandamere Press at the end of November.

“This was a lot of fun to research and write because I have a natural interest in studying presidential history and I actually learned quite a bit,” said Cook, who previously published another book on presidential memorabilia. “When I spoke to the DAR chapter and other groups in the past, I’d always get a lot of questions about first ladies, so I knew people were interested in this topic.”

Symbols of Patriotism profiles 12 first ladies who have ancestors who were involved in the Revolutionary War and, as a result, have become members of DAR, which has been in existence since 1890. Cook also explores the contributions the women made to the Office of the First Lady and the valuable roles they played in their husbands’ presidencies.

First ladies profiled in the book include Caroline Harrison, wife of former president Benjamin Harrison who served as the DAR’s first president general. Sarah Polk, who was elected as an honorary vice-president general of DAR shortly before her death in 1891, took on the role of press secretary and chief advisor while her husband, James Polk, was president from 1845 to 1849, Cook said.

“Some of the women profiled in this book were members of DAR before they became the first lady, and others were sought after by the organization later on,” Cook said. “Some were more active than others, but they all were very proud to be DAR members.”

But for one first lady, membership in the organization was short-lived. During his research, Cook learned that Eleanor Roosevelt, wife of Franklin D. Roosevelt, had the most ancestors linking her to DAR, but she resigned from the organization in 1939.

“I explain the reason in detail in the book, and I found it very interesting and relevant to the issues of today,” Cook said. “Discovering things like this was the fun part about writing this book and acting as a history detective.”

While Cook got the idea for the book from his presentations and discussions with fellow historians, he used his personal connection with a former first lady to formally announce his project. Cook was a featured speaker at a President’s Day celebration in Plains, Georgia — home of President Jimmy Carter, on Feb. 17, 2020, when he revealed his forthcoming book project. But prior to his presentation, when he attended a church service with the Carters, he told Rosalynn Carter about the book.

He went on to dedicate the book to Rosalynn Carter, who along with Laura Bush is one of two living first ladies connected to DAR.

“When I told her I was dedicating the book to her, she said she was very happy and humbled. And two weeks later, Mrs. Carter called me to tell me what I was doing was very important for history,” Cook said. “That meant a lot to me.”

Other presidential connections that Cook interviewed for the book include Mary Jean Eisenhower, granddaughter of Dwight D. Eisenhower, and Harry S. Truman’s grandson, Clifton Truman Daniel. Both of their grandmothers are profiled in the book.

“Mary Eisenhower told me her grandmother (Mamie Eisenhower) had a DAR pin that she wore every day of her life,” Cook said.

Even though Cook was able to draw on his connections to first ladies and family members of presidents, writing the book was a bit of a challenge due to restrictions enacted from the COVID-19 pandemic.

The DAR Constitution Hall, presidential libraries and historic sites were all closed, limiting Cook’s ability to conduct in-person research. He shifted his research to online outlets and his own library, which contains 2,000 reference books.

“The COVID shutdowns also cancelled all of my speaking events, but on the positive side it gave me plenty of time to research and write,” Cook said. “I think the book is coming out at the perfect time, especially with everything going on with our nation’s history. I really believe that people are intrigued by history, and it’s flattering to see their genuine reactions when I hand them a book.”

For more information or to order a signed copy of Cook’s book, email him at lcookhistorian@gmail.com.