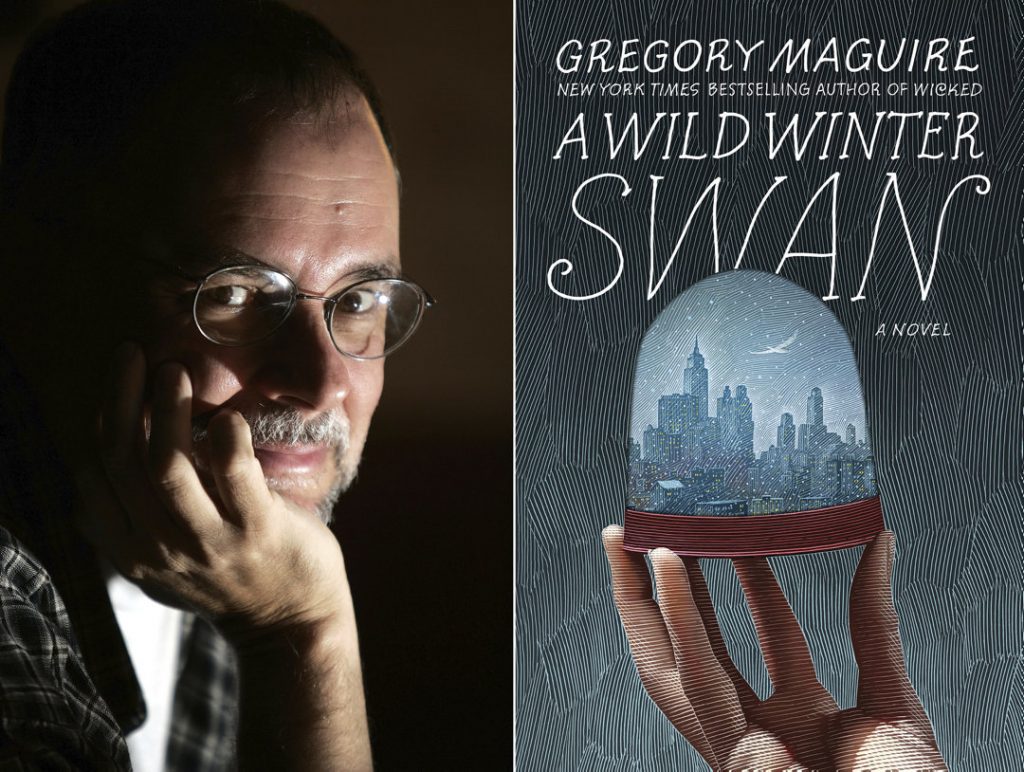 Gregory Maguire says his latest book ‘is like comfort food’

Gregory Maguire attributes the first grain of the idea for his new book “A Wild Winter Swan” to “Mary Poppins” author P.L. Travers.

He met her 25 years ago as he was getting ready to publish the hugely popular “Wicked,” written from the perspective of the witches in Oz.

“We talked about fairy tales that we loved and mythology that we were attracted to, and when the subject of Hans Christian Andersen came up she said, ‘Well, there’s that boy with one wing,'” (from “The Wild Swans.”) ‘Give him something to do.'” Maguire says he hung onto that nugget for 24 years until last year when he was transferring decades of handwritten journals to the computer.

“I transcribed the conversation I had written down with her after I left her parlor in London and I thought, ‘I’ve always loved that kid.’ When I was a boy, I used to think, ‘If he was around here, we would be best friends.'”

In “A Wild Winter Swan,” that boy with a swan wing for a left arm is prominent in a teen’s coming-of-age story set in New York City in 1962.

Maguire says he believes the book is “a perfect pandemic read” and “comfort food like mashed potatoes.” He spoke with The Associated Press about his life-long love of fairy tales, the celebrities he cast in his mind as characters in “Wicked” and how his kids ended up online despite his best efforts. Answers are edited for clarity and brevity.

Maguire: Those were the books where magic happened. My favorite books were the “Narnia” chronicles, the “Grimms’ Fairy Tales,” the Andersen tales. In eighth grade I began to realize there’s something dubious about someone in middle school reading fairy tales so I began taking out books for camouflage like ‘Bronco Joe’ and ‘Quarterback Joe’ and would slip ‘Grimms’ Fairy Tales’ between them.

AP: “Wicked” is now marking its 25th year since publication and the Broadway show has been such a huge success. Share what that writing process was like?

Maguire: My ambition was to write something that was like “War and Peace” or “Gone with the Wind” set in Oz, and something that had scope and sweep and time. The “Oz” books are all really compressed. I wanted to write about generations and family lines and great political powers at play. When I set off to write that because it was such a big task, I actually cast my novel with Hollywood actors so I could keep them straight. I had the young Antonio Banderas playing Fiyero. I had Glinda being played by Melanie Griffith with her high-squeak, helium voice and blonde curls. And my Elphaba was played by k.d. lang like from the cover of Vanity Fair where she’s being shaved by Cindy Crawford. I cast even smaller parts, like Angela Lansbury and Emma Thompson.

In a certain way I was filming it in my head as I was writing it. I think it’s not uncommon for writers that the story unspools as kind of a private film… I used to say when I taught kids writing,

“Every sentence has to be rich enough that if Steven Spielberg shows up at school tomorrow and says, ‘Give me that’ and looks at it, he can find a direction for his camera crew or his actors in every sentence.”

AP: Are your kids big readers?

Maguire: No, they are children of their time. And despite the fact that they were raised by two very reading parents and that we suppressed access to the Internet and even to television when they were young, they became children of the device. We finally cracked and realized we were sequestering them from the life of their peers in a way that wasn’t socially healthy for them.