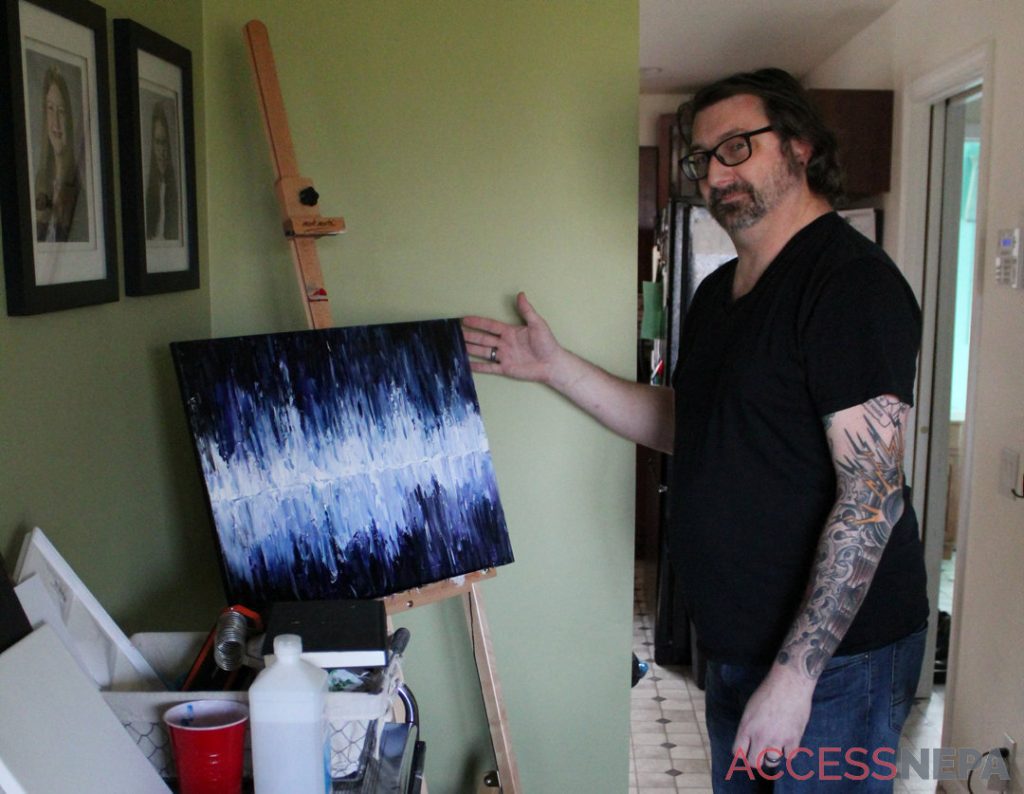 Local artist gets back to painting

Art has always been a passion for Shane Montross; he just wasn’t sure how he was going to use it as a career, so he turned his passion into an interesting side business.

The 42-year old Tunkhannock resident works full time as an IT manager at MetLife, but at home likes to dabble in graphic design and painting. He has created a full portfolio of his work, and even designed all of the labels for Cart/Horse Distillery in Erie.

“I have always been interested in graphic design, and that was what I wanted to do for a full-time career,” Montross said. “It’s not a super stable industry so that led me away from it a little bit, but I never wanted to stop doing designs so I always kept up with it.”

Montross attended Penn State University and was originally an architecture major, but switched majors and graduated with a degree in art with an emphasis in painting.

With his background in graphic design and computers, Montross has been tasked with designing websites including the website for Compass Immigration in Harrisburg, which helps students obtain their visas and documentation for studying abroad.

A couple years ago, Montross decided to pick up a paintbrush again.

It was for no particular reason, just something he wanted to do, to clear his mind.

“Painting is a way for me to get feelings out and express my reaction to things in the world,” Montross said. “I wouldn’t call myself a professional painter by any stretch of the imagination, but it keeps me sane sometimes.”

Montross isn’t the only painter in the family. He calls his cousin, Lance Montross, one of the art teachers at Tunkhannock Area High School, the star painter of the family.

He added with a laugh. “He’s the main painter among my relatives, I just dabble.”

The interesting thing is the way that Montross paints, rather than the normal paintbrush, he uses a palette knife to draw figures on his easel. There are a couple reasons why he prefers the palette knife compared to the brush.

Montross set up his painting studio at his home in Tunkhannock where he lives with his wife Rebecca, and three children: Aidan, Maya and Lillian. He calls it his creative outlet where he can go and do whatever he wants and no one will care.

“Since I was a little kid, I was always building stuff, or making things,” Montross said. “Art and music were my two favorite things about school growing up. Anything that is creative helps take my mind away from everyday work stuff.”

For kids who are looking to explore art and graphic design as a career, Montross tells them to go for it, that art is a great way to explore the world around you, and use art to test your mind and creativity.

“Art is a fantastic and relatively inexpensive way to explore the world,” Montross said. “It makes you look at things from a perspective that you normally wouldn’t consider.

He also added that in this time of isolation during the pandemic, art could be a great way to keep your mind in a good place.

“Now that everyone is stuck somewhere, it’s very good for your mental health,” Montross said. “Mental health is actually one of the reasons that I started painting again. It just put me in a good place.”

You can view all of Montross’s completed works on his website, www.shanemontross.com, and you can email shane.montross@gmail.com if you are interested in purchasing some of his paintings or designs. You can also follow his art work on Instagram @omfug.