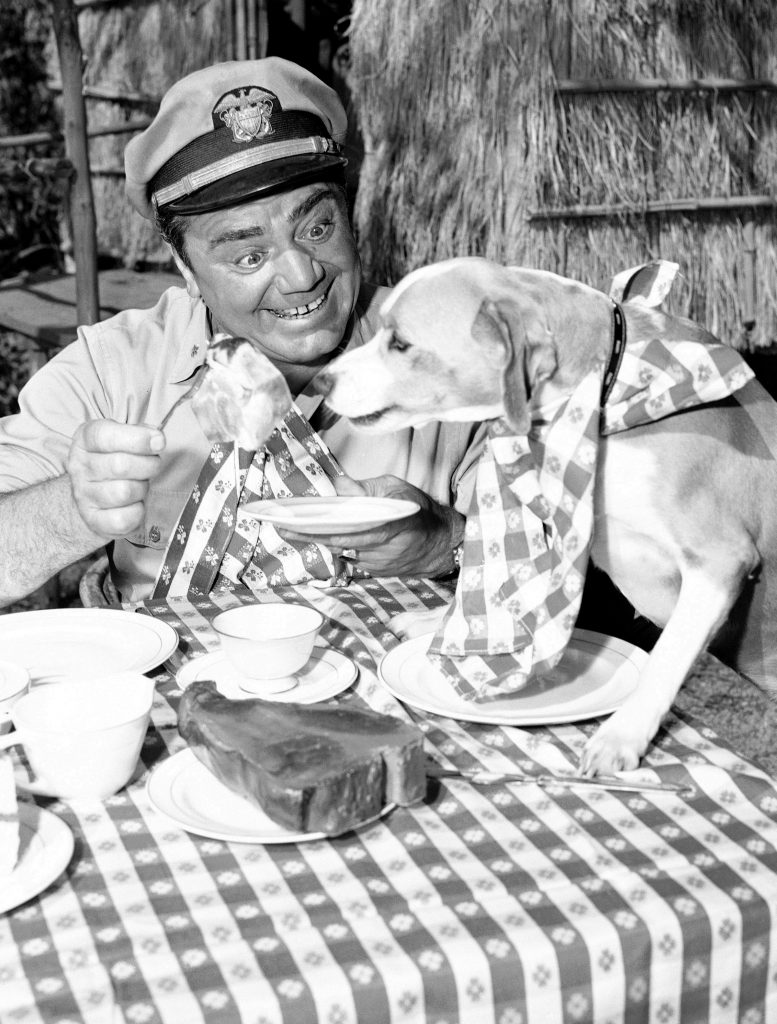 A look back at military sitcoms

What was Schultz’s serial number?

What were Burkhalter and Hochstetter’s first names?

Who is still alive from the cast?

What did Kinch do in civilian life?

Was there an actor who appeared in “Hogan’s Heroes” really named Robert Hogan?

The first four: Schultz’s serial number was 23789. It was Alfred Burkhalter and Wolfgang Hochstetter. Robert Clary. LeBeau, and Kenneth Washington, Baker, are still alive. Kinch worked for the telephone company in Detroit.

Yes, there was an actor named Robert Hogan, Bob Crane’s character’s name. Do you remember the episode when a group of prisoners escaped from another stalag, and didn’t think Hogan’s group could get them safely out of Germany? Two of them tried to escape in a water truck. Those two prisoners were Braden and Mills. The dark-haired actor who played Braden was, indeed, actor Robert Hogan.

There were four TV sitcoms that represented the four branches of the service — Hogan, Army Air Corps, which became the Air Force in 1947; McHale’s Navy; Gomer Pyle, USMC, and M*A*S*H, Army.

In the last column, we talked about Hogan. In this installment, we will talk about two of the other three.

McHale’s Navy was on the air for four years, 1962 to 1966. In the last season, McHale, his crew. and his nemesis, Capt. Wallace Burton “Leadbottom” Binghamton, were moved from Taratupa Island in the Pacific Theater of War, to Volta Fiore, Italy in the European Theater of War. The move was made to take better advantage of Ernest Borgnine’s Italian heritage. In a few episodes, he played his look-alike cousin.

McHale’s crew was described by “Leadbottom,” something along the lines of “the biggest gang of brigans and cut-throats since Genghis Khan.” Like Klink wanted to be a general, wanted to be an admiral. But remember what Major Hochstetter said about Klink once, “Colonel Klink, a man who could have been great, except he wasn’t very good.” That applied to Bingy as well.

Capt. Binghamton was a bungler who got a Navy commission because he worked at the Long Island Yacht Club. His right-hand man, Lt. Leroy Carpenter, was rivaled for his incessant boot licking only by Col. Klink.

He was jealous of the success of McHale and his crew. It seemed whenever they weren’t supposed to be somewhere, they would back into action with the Japanese, and come out smelling like a rose, blowing up a Japanese sub, or, in one episode, locating a Japanese jamming station. That one was one of my favorites because the crew adjusted the Japanese equipment so Christy could talk to his daughter, after she learned to say “Daddy.” But it was only when Binghamton talked to the little girl on the radio when she repeated “Daddy.”

Ensign Parker, played adeptly by comic genius Tim Conway, was a bumbling idiot who, with the crew’s help, actually shot down some Japanese planes, and sank a Japanese sub or two.

The unofficial crew leader was Torpedo Mate Lester Gruber, who was always trying to come up with the next scam, whether it was some kind of a gambling junket, brewing and selling booze or doing the laundry for a fee; Quatermaster George “Christy” Christopher, who was the closest thing the crew had to a normal Naval officer; Machinist’s Mate Harrison “Tinker” Bell, who kept McHale’s boat, the PT 73, running — as well as some gambling pursuits; Radioman Willy Moss, who made the moonshine.with recipes for “corn squeezins” from his native Tennessee hills; Gunner’s Mate Lester Edwards, the Don Juan of the crew, and Seaman Joseph “Happy” Haynes, who was furloughed before the series ended when he got the captaincy of his own boat, “The Love Boat.”

One of my “Unsung Heroes of TV” was also in the cast. Jane Dulo, who appeared in character actress roles her entire career — including the recurring role of Max Smart’s mother-in-law in “Get Smart” — was the head of the nurses on Taratupa, Commander Molly Turner, who was always trying to corral McHale into romance.

A few other Unsungers were from the one season in Italy — Henry Beckman, who played the scheming Army Col. Harrigan; Simon Scott, who played the commanding Army General Hubert Bronson, and the Volta Fiore Vice Mayor Dino Baroni — lest I be remiss in mentioning his character’s name — was none other than Dick Wilson, yes. Captain Gruber from Hogan and Mr. Whippel.

Jim Nabors’ “Andy Griffith Show” character., filling station attendant Gomer Pyle, enlists in the United States Marine Corps — apparently not realizing what the Corps stood for, or how difficult the training would be. But in his own, homesy way, Gomer made sense of the Marines, his commanding officer, the always-loud Sgt. Vince Carter, and a lot of comical situations his unceasing honesty got him into.

My favorite character on the series was Sgt. Charlie Hacker, the mess sergeant, who was always getting Pyle in trouble to make Carter look bad. The actor who played Hacker, Allan Melvin, was also Sam the Butcher, Alice’s boyfriend on “The Brady Bunch.”

One of my favorite characters on this show was Ronnie Schell, who played, first Private, and then Corporal Duke Slater.

When “Gomer” went off the air in 1969, CBS gave Jim Nabors a variety show. Frank Sutton, Sgt. Carter, and Schell were regulars. There was this one recurring skit they did in which Nabors and Sutton were brothers-in-law who ran this fleabag hotel. Schell was the hotel’s resident drunk who used to fall down the steps every week.

His falling down the steps was so funny to the 10-year-old me I ran a few blocks from our church’s Thursday night raffle drawing home to see Schell fall down the steps.

Gomer debuted in 1964, and lasted five seasons. The show was on the air during the Rural Comedy Period, along with the show it came from, as well as “The Beverly Hillbillies” and “Green Acres.”

Finally, the Army was saved for M*A*S*H, which will be discussed in a future column.
Before I forget, “McHale’s Navy” is still on the Antenna TV Network, Channel 16-2, which is channel 96 on Service Electric Cablevision.

True or false. Did Gomer Pyle USMC and McHale’s Navy lose a key cast member both near age 50?

One more. What was McHale’s Italian cousin’s name?