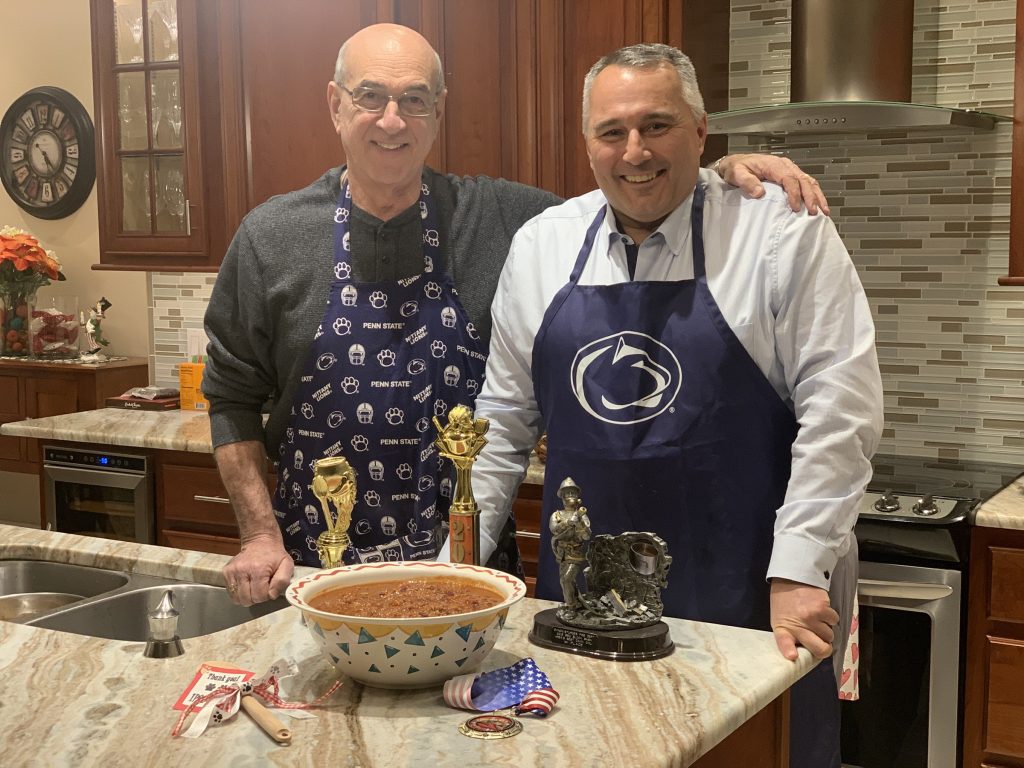 You know you have a great friend when he shares a coveted recipe.

Jerry Gillette of Archbald and Ron Yanoski of Eynon have been pals for more than 25 years. Aside from time spent together watching their kids’ sports teams or bonding over their love of Penn State football, the two also share a chili recipe.

Gillette gave the recipe to his friend years ago, and Yanoski has gone on to win several chili cook-offs throughout the region with it. He plans to enter it again in the upcoming Chili Cook-off for In Pursuit of GRACE on Saturday, Feb. 15, at 1 p.m. at Happy Valley Sports Bar, 516 Storrs St., Dickson City. An animal advocacy and community outreach (nonprofit organization, In Pursuit of GRACE will receive a $50 gift card to Riccardo’s Market, 1219 Wheeler Ave., Dunmore, courtesy of Local Flavor Gives Back.

“It really is a great recipe, but it has an interesting story behind it, too,” said Gillette, who came upon the chili while at a business dinner at the Ross Club in Williamsport. “I always liked to try different chilies, but I had yet to really find one that was better than my father’s. My father (the late Frank) was a chef at the Hotel Casey, and he made the best chili I had ever tasted.”

The chili tasted delicious, and the chef gave Gillette the recipe, which was almost identical to the one his dad used to make, although it had one extra ingredient: a jar of Tostitos medium salsa. Gillette made the recipe for a kids’ sporting event where Yanoski tried it for the first time. He gave Yanoski the recipe and the rest is history, though the two have slight differences in the way they each make the dish.

Gillette advised cooks should not substitute another salsa brand, as it won’t taste the same. He also crushes the tomatoes by hand, which gives the chili a thick consistency.

On a recent night with Gillette and wife, Cathy, and Yanoski and his wife, Chris, Jerry’s Great Chili lived up to its name. The sweet and smoky dish had a hint of spice and just the right amount of hearty meat and veggies.

You can try the award-winning recipe for yourself at the cookoff. There will be a $10 cover to enter the event, and proceeds will benefit In Pursuit of GRACE’s mission to provide education and resources to pet owners and the community as well as to advocate for animals.

Guests will have the chance to sample different chili recipes and vote on their top three favorites.

While many cooks wouldn’t want to give up their secret recipes, the event is for a good cause, Yanoski said, and he’s not worried about anyone stealing his thunder the day of the competition.

“We give it to everyone, but it’s so funny, not one person’s comes out the same,” Yanoski said. “It all comes down to how you do it and all the little changes you might make. Everyone’s (chili) turns out just a little different.”

Brown ground beef, onion, peppers and garlic in a pan and drain.