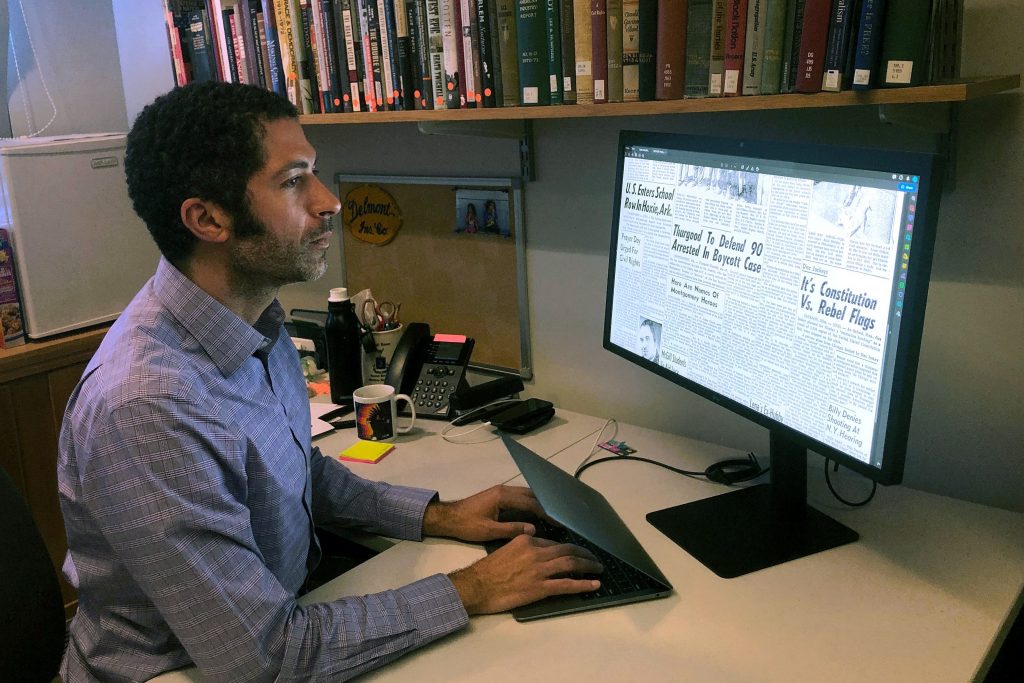 A few years back, Matthew Delmont felt his teaching about African American history had gotten a little stale so he starting casting around for a fresh way to bring it to life.

The Dartmouth College professor initially turned to Twitter for a year to share stories about the everyday lives of African Americans that he read about in black newspapers. That project expanded in November to become the website Black Quotidian, which features profiles of hundreds of African Americans taken from black newspapers mostly between the 1900s and the 1980s. It also contains scanned articles from about a dozen papers like the Chicago Defender and Pittsburgh Courier along with audio recordings, photos and videos.

“l felt like my students were coming away from the class only thinking African American history was about these civil right marches or about martyrs,” said Delmont, who started his project in 2016 at Arizona State University before completing it at Dartmouth. “I felt like they spent so much time thinking about black death that they were losing sight of the broader complexity, really the beautiful aspects of African American history.”

Mostly black-and-white and looking in some ways like a copy of a decades-old newspaper, the website features African Americans who made their mark in sports, politics and voting, the military and several other areas. And while there are mentions of icons like Dr. Martin Luther King Jr. and civil rights pioneer Rosa Parks, Delmont keeps the focus on the lesser known figures.

Among them are Juanita Blocker, the first black member of the Professional Women’s Bowling Association who also had a bowling column in the Los Angeles Sentinel for 20 years. There is also post on Welford Wilson II, the New York City Junior High School’s Oratory champion in May 1929, and one on Claudette Colvin, who as a 15-year-old refused to give up her seat on a bus —- nine months before Parks did the same.

“These iconic figures are important but we need to understand the everyday people doing important things in their community,” Delmont said, noting there is a growing desire to rediscover overlooked African Americans.

Delmont said he hoped the site would also draw attention to the significant role such newspapers played, especially in African American communities that had recently migrated north. They chronicled people’s daily lives and were often a critical source of news for everything from politics to sports to weddings — events largely ignored by the white press.

Ethan Michaeli, who worked for the Chicago Defender and wrote a book on the newspaper, said the website is offering a fresh interpretation of the role these newspapers played in black communities by highlighting the people who featured prominently in their pages. Many of the black papers on the site have closed or done away with their print editions.

“I’m very excited about it as kind of serving as the bridge between the past and the present in this way,” Michaeli said, adding that it serves as a “go-to place, a location for those that want to understand the history of the black press.”

Gretchen Morris, a retired teacher from Los Angeles, discovered the site while researching her grandparents, Welford Wilson and Blanche Wilson. An article about her uncle, Welford Wilson II, the Oratory champion, provided additional details about them, including their schooling.

“There are so many people who are inspiring, could inspire,” Morris said. “It helps to lift or upgrade the self-esteem of African Africans when they find out the different things that other African Americans did.”

A time to reap, a time to sow
It's Elementary
Space agency gets down to Earth
What the heck is that?
Staff