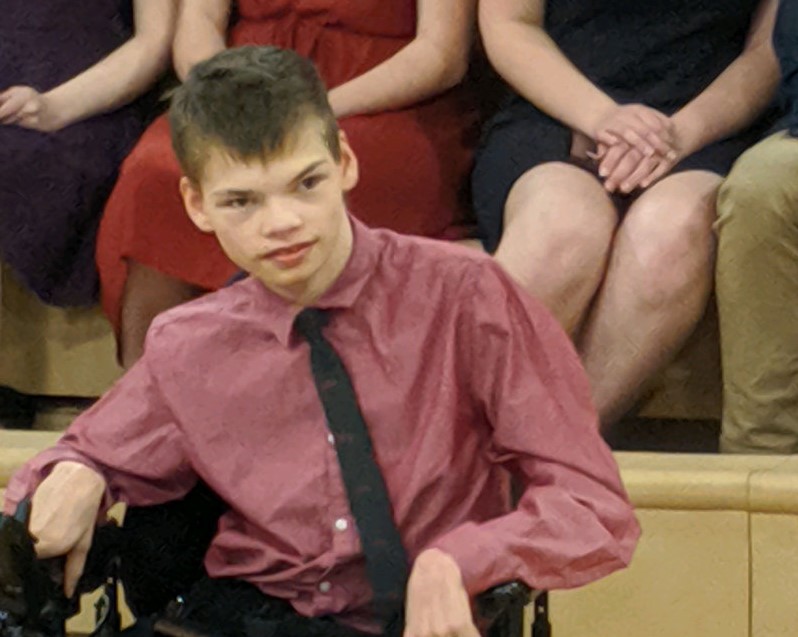 Fundraiser to help teen in powerchair get ADA van

Who: Peyton McGrath is your typical 16-year-old, whose days as a sophomore at Wallenpaupack Area High School usually are full not only of learning but also with various activities, from managing the varsity basketball team to participating in video club and Science Olympiad.

A resident of Hawley — where he lives with his mom, Natasha Morgan-Doty; stepfather, Jonathan Doty; and his older brother, Gerard McGrath, and where his dad, Michael McGrath, also lives — Peyton has had to endure much more than his peers, however. After being born premature at 29 weeks gestation, Peyton was diagnosed with quadriplegic spastic cerebral palsy and uses a wheelchair. He receives care at Children’s Hospital of Philadelphia and physical therapy at St. Joseph’s Center, and he has had multiple surgeries in his young life.

While hard work will help him grow stronger, Doty said, Peyton will never be able to walk on his own. Things began to look up last summer, though, when he acquired a power wheelchair, which Doty said “opened up a whole new world of experience and independence for him.”

What: While the powerchair was a blessing in many ways, it highlighted another need. The family has been using a 2005 Honda Odyssey to transport Peyton and the powerchair, which weighs more than 400 pounds, but the van has broken down several times. Peyton’s family hopes to buy an ADA-accessible van, which will allow him to drive right into the vehicle, eliminating the need for his mother and stepfather to lift him out of his chair and into the van like they do now, a physically demanding task that becomes tougher as Peyton grows. Having a properly equipped van also could save Peyton any potential embarrassment he might feel by needing others to lift him and give him more independence.

When/where: The public can donate through the GoFundMe page, “Wheels for Peyton,” or by mailing contributions for the “Wings for Peyton” account to the Dime Bank, 309 Main Ave., Hawley, PA 18428.

In his own words: “Donations and support by sharing his GoFundMe page would make it possible for Peyton to have a life of freedom and mobility he’s never experienced but surely deserves, allowing him to go more places and hang out with his friends like a regular 16-year-old boy should. It would also help his family not only financially — ADA vans are a small fortune — but (also) physically since the current situation is lots of lifting not only him but (also) ramps.” — Jonathan Doty, stepfather