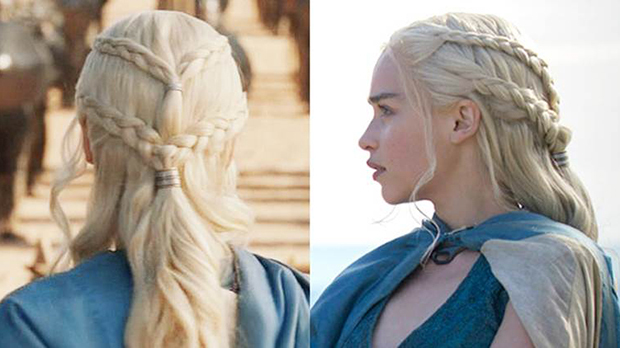 A deep dive into the hairstyles of ‘Game of Thrones’

I have to admit, I couldn’t get into “Game of Thrones” the first time I watched it. Or the second. Third time proved to be the charm and I finished the entire series in two weeks. (Note: NEVER do this unless you want to have nightmares that the White Walkers are coming for you.)

I immediately became obsessed with theories, backstories and prophecies but me being me, I was mostly into the characters’ LEWKS. Before the HBO show’s series finale airs this Sunday, I wanted to provide the only commentary I know how: appearance-related.

Way back in my college Media Criticism class, I learned nothing in the media is random and everything is done for a reason. Clothes, hair, makeup, grooming — it all works together to tell the story. “Game of Thrones” has seen many characters on journeys to find themselves and their destiny and their appearance almost always matches what they’re going through. Here’s my deep dive into the hairstyles of “Game of Thrones.”

*ATTENTION: THERE KIND OF ARE SPOILERS IN THIS. NOTHING INSANE BUT JUST BE CAREFUL*

It’s no secret that Daenarys’ hair is ICONIC. Ms. Targaryen’s platinum blonde hair-down-to-there has undergone the most amazing transformations. From easy, breezy waves to serious intricate braids, the Mother of Dragons’ hairstyles have been a representation of Dany’s journey to take her rightful place on the Iron Throne. Her hair evolution is assumed to be based upon the Dothraki culture of her late husband, Khal Drogo, where the Khals grow long braids to symbolize their victories. Her braids multiplied and grew more complex with each win. As she made her way through the cities she conquered in Essos, she also took style cues from the cultures of the eastern continent. And like any woman trying to get stuff done, she’s also known to pull it back when planning for battle or facing off against enemies. We love a practical queen.

From bastard to Lord Commander to King of the North to (possibly) the rightful heir to the Iron Throne. Jon’s story arc is COMPLICATED but his gorgeous black curls are NOT. Jon’s hair has remained pretty much the same over the series, getting longer each season and, finally, long enough to be tied up in a manbun for the final episodes and their many battles. His facial hair has seen the most significant change over the years. (Kit Harington once admitted his season one goatee was drawn on because the then-22-year-old “couldn’t grow a proper beard.”) His facial hair filled in nicely, however, and Jon assumingly continued his Northern-bred grooming habits. During his time North of the Wall as part of the Night’s Watch, Jon looked just a bit unkempt but quickly returned back to trimming and shaping his facial hair and moisturizing his curls for the last three seasons. This points to Jon’s ability to adapt to any role he’s thrust into but his commitment to who he is and where he comes from.

Sansa is the biggest beauty chameleon in all of Westeros. Sophie Turner once said in an interview that “Sansa’s hair is constantly reflecting the people she’s learning from, or mimicking, or inspired by at the time.” Sansa set out on a path that led her to hell and back and, just like her story arc, her look changed with each defining moment in her life. While in King’s Landing, Sansa mimicked the medieval styles of Queen Cersei with buns, glamorous hair accessories and braids. When Westeros cool-girl Margaery Tyrell and the other ladies of Highgarden came on the scene, Sansa was seen sporting longer locks and loose, effortless styles a la the Reach. Her time in the Eyrie saw a darker version of Sansa emerge, literally, with raven hair and harsh, structured styles, before her journey back to Winterfell and marriage to sadistic Ramsay Bolton. Like the phoenix she is, Sansa rose from the ashes, gave her enemies what they deserved, and emerged with her signature red hair and no-nonsense styles like braids, twists and natural texture (and FURS!), just like mom, Catelyn.

Missandei (I call her Missi) first came on the scene in season 3. Initially a slave in a southwestern part of Essos, Missandei quickly becomes not only Dany’s translator and part of her court but also the queen’s best friend. Missandei’s hair doesn’t necessarily change —  her gorgeous curls are present throughout — though her hair begins to reflect her status and  bigger budget for hair care. Missandei held her hair back with a braid or twisted headband, and also started to rock more-defined curls and fuller brows which points to access to products to keep her hair bouncy her brows lush. No matter her style, Missi has the best beauty in all of the Seven Kingdoms (and maybe even both continents.)

Baddie Queen Cersei started out with her looooong honeycomb-colored hair in intricate styles like updos, braids and buns with plenty of bling and *~g0Ld~* to show off her Southern pride, wealth and HBIC status. As the seasons progress, Cersei’s hair changes depending on her atmosphere. When her attention is drawn inward toward her family drama, she wears more relaxed styles but, she quickly switches back to her complicated updos and accessories when the Tyrells come to King’s Landing to show them she’s true royalty. As she begins to lose her family and her power, Cersei reverts back to simple twists or pinned half-back before her long, flowing hair is cut off as punishment. From here, Cersei owns her pixie cut, keeping it short and sleek as she seeks revenge on those who wronged her and takes the Iron Throne for herself.

The youngest and feistiest Stark, Arya would have rather learned archery or practiced swordfigthing with her brothers than learn stitching with sister Sansa. A little girl when the show begins, audiences watch Arya come into her own as a woman with hair to match each phase of her life. After her father is betrayed and beheaded, her braids are cut off to help disguise her and to get her to safety — her loss of pigtails also marked her loss of innocence. Then, Arya sets out on a journey (where she must pretend she’s a boy named “Arry” for a bit) and becomes a skilled fighter, even joining a mysterious cult of assassins. Finally, she makes her way back to Winterfell to seek revenge and get back to her family, keeping her hair shoulder-length and pulled back. You can’t deal with stray hairs while you’re kicking serious ass.

Literal Golden Boy Jaime Lannister was first introduced to us as the handsome twin brother of Queen Cersei who was not only having a secret incestuous affair with his twin sister but also pushed a child out of a tower to protect said affair. During the start of the series, Jaime’s look reflects this facade: flowy blond hair, perfect jawline, great smile, etc. As his story fleshes out (captured and held prisoner several times, loses fighting hand, father and children die, loses Cersei’s affections), his defeats tear down his “perfect” appearance to reveal a real person with feelings and maybe even a heart. His outsides are not traditionally handsome anymore: his golden hair is short and graying, his clean-shaven angular jaw is covered by a salt-and-pepper beard, his face holds more lines than it used to but, all in all, he’s a better person inside. (Spoiler: Not for long. Ugh.)