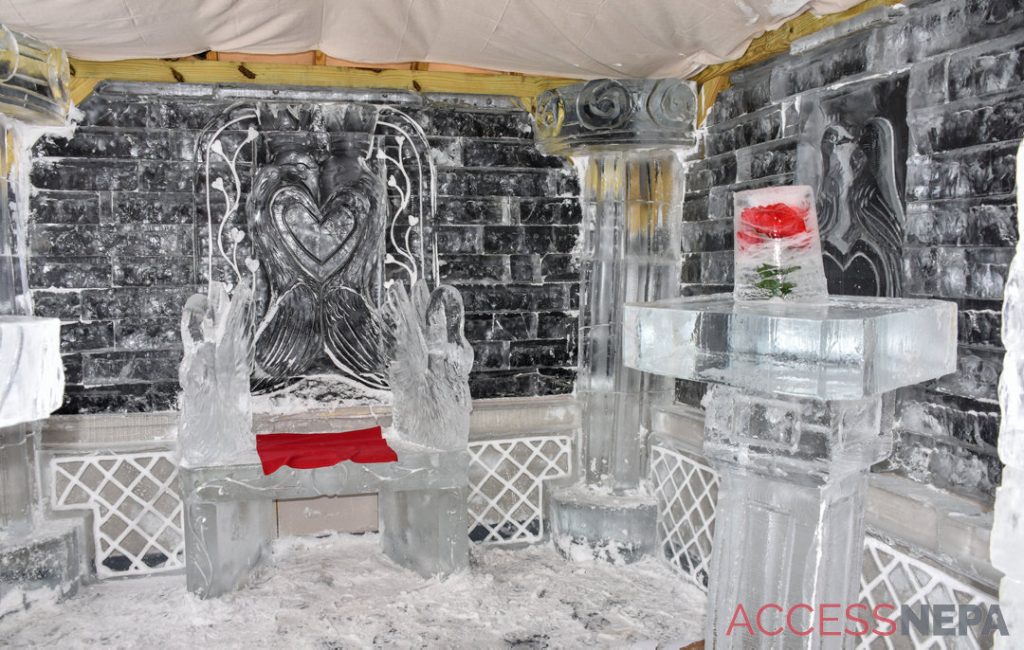 SUGARLOAF TWP. — With his snowy boots, thick gloves and power tools, Morgan Brown looked like any construction worker this winter.

But he built with ice, not wood or stone.

“The Eskimos were on to something,” Brown said while scoring a 150-pound block with an ice pick and framing square.

Ten months of the year, Brown works construction, but in winter he builds with Kevin McDonald, who commissioned three ice huts and sculptures outside Damenti’s Restaurant, 5 Bowman’s Mill Road, for Presidents Day weekend.

Customers can order drinks inside Damenti’s and step outside to the huts to take photos, admire sculpture and sit on ice thrones. McDonald figures the art won’t melt for two weeks. The ice bar will be open nightly from 5 to 9.

For 35 years, McDonald has been carving ice and staging ice shows at Damenti’s and other venues in Northeast Pennsylvania.

Growing up in Mountain Top, where he still resides, Brown lived near enough to Damenti’s that he gravitated to the restaurant, which used to be on North Hunter Highway in Butler Twp.

“At 13, I was working with Kevin in the gardens,” said Brown, whose brothers and sisters also hired on at Damenti’s.

Nowadays, Brown uses winter downtime in his construction jobs to assist McDonald on ice projects. He has traveled as far as Alaska for an international competition in 2003.

“I’m more of a handler, stacker, builder,” he said.

After scoring lines on a rectangle slab that weighs 150 pounds Thursday, Brown deepened each line with the tip of a buzzing chainsaw, placed the slab flat on a table and chinked off blocks for Richard Bubin.

Bubin stacked blocks between wooden frames, walling in the hut and mortaring with slush.

“We use only the finest Pocono water with snow,” Bubin said.

He is from Pittsburgh and owns a carving company, Ice Creations. 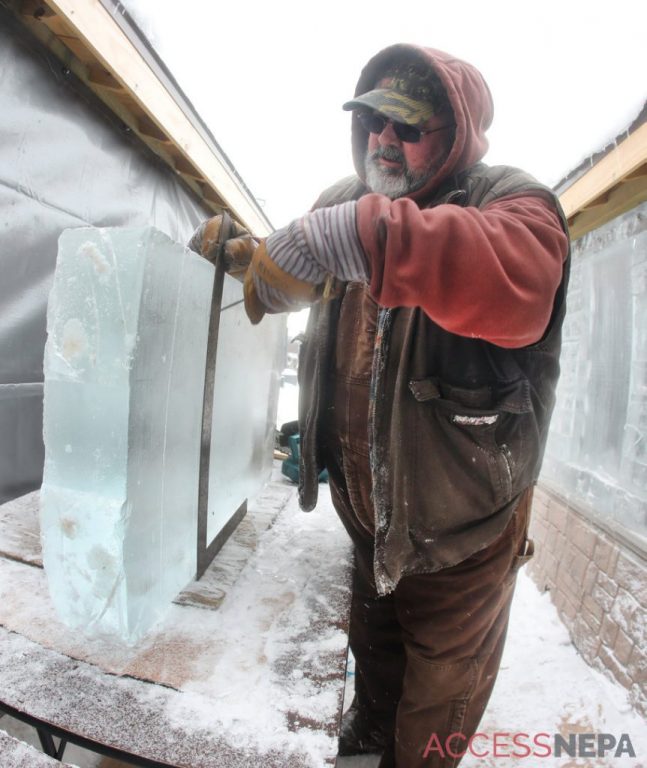 WARREN RUDA / STAFF PHOTOGRAPHER
Morgan Brown of Slocum Twp. scores an ice block with a pick for use in an ice carving event this weekend at Damenti’s Restaurant in West Hazleton. The tradition of carving ice castles started in 1986 at a birthday party in a backyard. ICE4U2C is continuing the tradition by making three castle replicas, which will be on display starting Saturday.

During 40 years in the restaurant business, Bubin rose from busboy to chef. After carving sculptures from fruits and vegetables, he started decorating tables with ice art.

Bubin once held a record in the Guinness Book for carving speed. He captained an American team that won for its carvings at the 2002 Winter Olympics in Salt Lake City and competed widely in carving contests.

“I’ve traveled the world with a chainsaw,” Bubin said.

He and McDonald have collaborated at Damenti’s and other spots in Northeast Pennsylvania.

In one, they built a life-sized locomotive pulling a club car in which everything from diners to glasses on the tables were carved from ice.

Bubin taught himself to carve ice from a Japanese book that he couldn’t read, but the pictures helped.

His art still takes an Asian look, especially when he carves dragons, like a 17-footer done in Salt Lake City where room temperature hit 56 degrees. 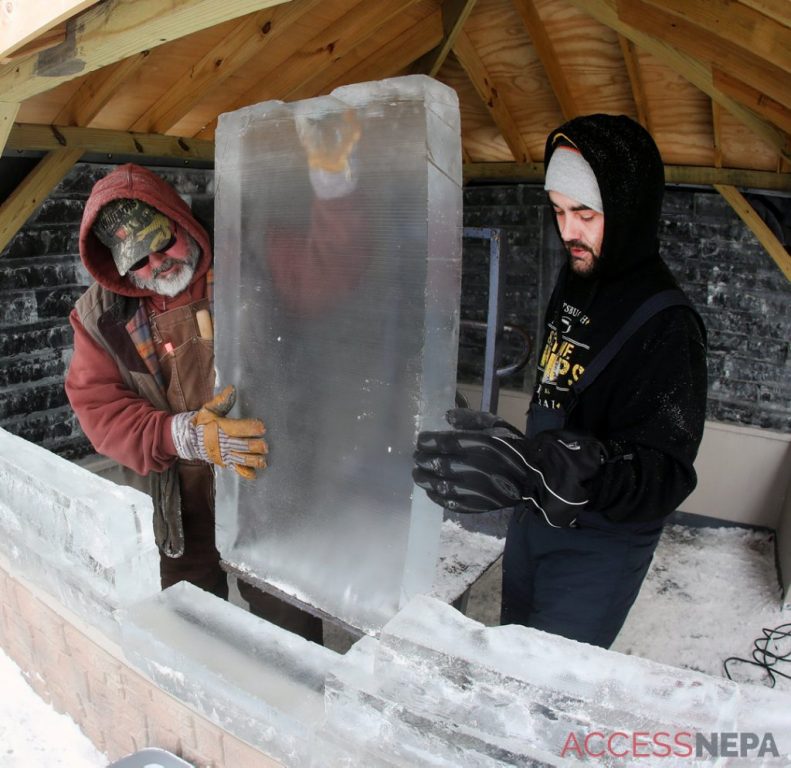 Working outdoors in freezing temperatures the past week with Paul Kukic at Damenti’s, Bubin made two more dragons.

The beasts guard either side of an ice throne on which a couple can sit while resting drinks on a pedestal table also carved from ice.

Similar seats with different motifs decorate other huts. Patrons will place money, with half of the proceeds from the ice bar going to charity, into collection boxes to vote for the winner of a King of Thrones contest.

The king of the jungle, his mane flowing to the edge of an arched window, is in one hut, flanked by lion’s-head pillars.

In a third hut, finished in time for Valentine’s Day, a heart is inscribed into a wall; swans nestle on either side of the throne; and atop a drink table, encased in a pillar of ice, rests a red rose.