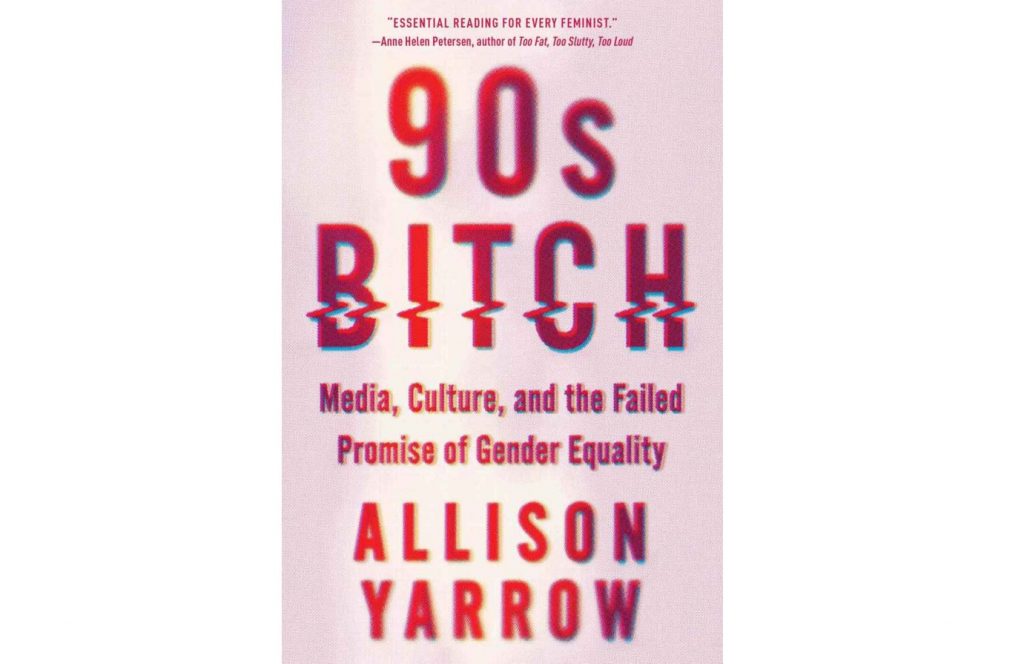 As a girl in the ’90s, I idolized the Spice Girls, spent my birthday and Christmas money on “Girl Power” notebooks and scrunchies, and saw many a Victoria’s Secret catalog arrive in the mailbox. I was awash in a hot pink, midriff-bearing, “MTV Real World” culture that was rewarding and punishing women in weird ways, to say the least.

Punchlines about battered women who fought back? I thought it was normal. My middle school history teacher talking about the president and his intern in the Oval Office? That too. The decade taught me that I had to look good, like boys (but not too much), buy stuff and, most of all, use the women that society praised as a yardstick for my own development while making sure I didn’t become like the ones we were all collectively judging.

Those lessons akin to walking a tightrope and not dropping the juggling pins — no mistakes, girls! — are the subject of journalist Allison Yarrow’s “90s Bitch: Media, Culture and the Failed Promise of Gender Equality.” Yarrow’s biting autopsy of the decade scrutinizes the way society reduced — or “bitchified” — women at work, women at home, women in court, even women on ice skates.

“The more women assumed power, the more power was taken from them through a noxious popular culture that celebrated outright hostility toward women and commercialized their sexuality and insecurity,” Yarrow writes in the book’s opening pages.

Her nonlinear narrative zooms in and out of the decade, highlighting hot topics, news events, real women and fictional television characters to examine the cultural conversation around sexuality, abuse, motherhood, professionalism and even undergarments. Americans in the ’90s — amplified by a burgeoning 24/7 cable news landscape and its audiences — loved to talk about the women they hated. Yarrow recounts society’s fascination with the angry bitch (call to mind the headlines about Lorena Bobbitt and TLC’s Lisa “Left Eye” Lopes), the bad mom bitch (does Roseanne Barr ring a bell?), the damaged bitch (recall “the fallen princess” Diana) and the manly bitch (for which Janet Reno was often a punchline).

It’s not that some high-profile women of the ’90s didn’t do questionable or wrong things — let’s take, for example, Courtney Love’s reported drug use during pregnancy. It’s not that the hammer of public opinion came down on them hard, but that it came down at all. Rock daddies seldom slowed their coke snorting when babies came into the picture, Yarrow reminds us.

Of course, you can’t discuss women in the ’90s without mentioning Anita Hill and Monica Lewinsky, and Yarrow devotes several pages to examining society’s treatment of both women. Yarrow writes that the “old, stale messages that women should fear the sex that men were entitled to persisted in the ’90s, despite the decade’s lip service to modern ideals … this dichotomy would shape the decade’s two biggest sex scandals.”

Both women would be chastised, even threatened, throughout their lives for sexual encounters — both uninvited and invited — with men who wielded power over them. Sadly, Yarrow writes, no one recognized in real time that what happened to Hill was “gallows humor satire of ’90s bitchification.” Direct quotes from politicians, journalists and comedians about the women provide the most jarring, oh-my-god-that-really-happened portions of Yarrow’s decade excavation.

Criticism of Lewinsky’s consensual sexual relationship with the president became a national pastime in the late ’90s, and anything was game — her sex life, her size, her undergarments. Yarrow takes issue that journalism’s highest prize was awarded to New York Times columnist Maureen Dowd in 1999 for her takes on Lewinsky. In them, she compared Lewinsky, more than once, to Glenn Close’s character in “Fatal Attraction.”