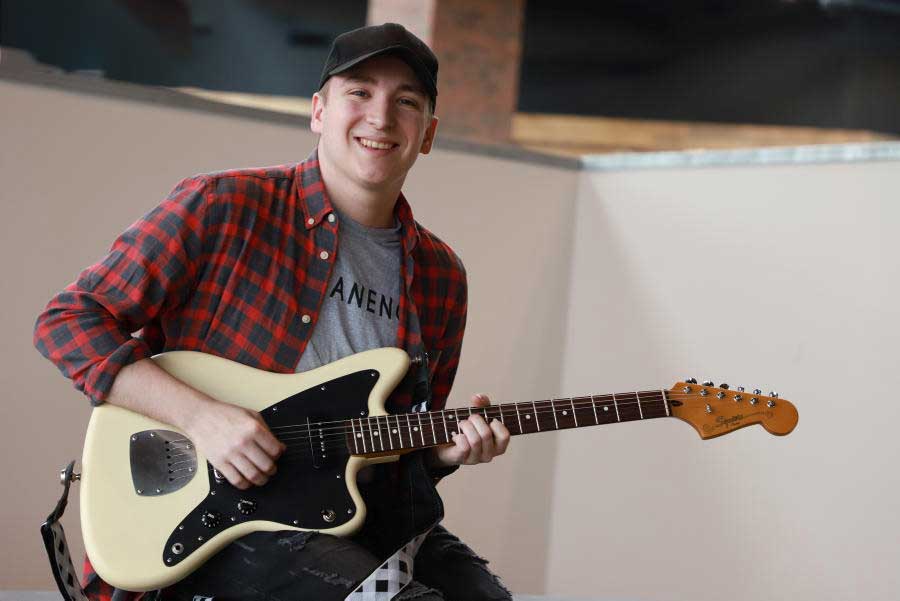 Ryan Gruttadauria is the guitar player for Alma Mater. He joined Jerry Maloney and Vinny Amarando to form the three-piece and they will release their first EP as a group “Fractured” on May 10. Gruttadauria is a graduate of Pittston Area High School and Luzerne County Community College, where he studied music recording technology. He is employed by Guitar Center and lives in Duryea.

Q: What first got you interested in guitar and music?

A: My first instrument is guitar. My grandfather, when I was younger, he was a drummer. I always wanted to do something musical because he talked about how cool it was. He always inspired me to want to do that. I guess that’s where it started. When I found out my grandfather was a drummer I thought that was the coolest thing. He was in a wedding band. I always loved rock music and just ended up here. I stuck with guitar when I taught myself drums. When I started in Alma Mater, I played bass, then our guitar player left and I started doing that. I always wanted to play music

A: Alternative is the best way to sum it up. We have a cello in one song and a trumpet in another, it’s kind of all over the place. Our drummer lives in Indiana for school. He’d come in once every few months and we’d write something. We have an EP coming out next month and lyrical content, this was really personal for a lot of us. My grandfather, who I mentioned, passed away in November 2017. It was a lot of internal conflicts with stuff that goes on, at least for the parts I wrote, and those ideas intertwine with Jerry and Vinny’s ideas. I don’t know how it worked so well. It just fell in sync.

Q: What was it like being a newcomer to two people who were already good friends?

A: Jerry and Vinny have been playing together since they were teenagers. I was terrified, but it started clicking really well. I’d get together with Jerry and it would be fun and I’d get together with Vinny and it would be fun, then we’d all get together and just kill it, it’s so much fun. I was so scared, because I know people who I’ve written music with since I was 13 and I know how it works and as soon as you throw someone new in the mix, sometimes it doesn’t work at all. I thought I was going to be that dude who was told to go sit over there.

Q: Describe the experience of producing your first music video and EP.

A: I’ve never been in a music video before. Jerry had to go back to Indiana, so we knew the single was going to come out while he was gone. We thought ‘let’s just film this really quick while he’s here.’ We went to a bowling alley in South Side at 10 in the morning on a Saturday to film the music video. Little did I know that’s a very busy time for bowling alleys because that’s when all the leagues are there. We went there with a camera and were awkwardly going to have to sing the parts without the music on, so instead we just bowled then went to Cinemark and filmed more in the arcade. It was so much fun. We started recording in early 2018 for the EP. We just finished it in March. It was awesome, but it was nerve wracking because Jerry wasn’t there for some of the sessions. For the most part, it was long days, it was a lot of good experiences. We had a lot of friends help out too. Our one friend, Dan King did the cello, Jay Preston did trombone on one of our songs, Ed Cuozzo and Kyle Lukasewicz from University Drive and Black Hole Heart sang on other songs, so we’ve had people come in left and right and add little touches.

Q: What is the best advice you’ve received on your musical journey so far, and from whom?

A: Just hearing tidbits of information from these guys who have been doing this for so much longer than I have is really cool. I look up to Ed [Cuozzo], because he did something that I’ve always wanted to do. His first record was just him. He does every instrument. He always gives awesome advice. He said something along the lines of: don’t waste your time and wait around for people. I thought it was the coolest thing because I constantly wait for people to be ready and want to do stuff. That opened my eyes and I started hanging out with the right people and getting the job done. He literally just said don’t wait for anyone.

Q: Who are your musical inspirations?

A: I’m obsessed with a band called Thrice. Just because they do everything from rock, then they’ll have a song that sounds like it’s from the 30s with piano and jazz. I cry every time I see them. They’re amazing. I’m a huge Frank Sinatra fan. It makes me think of my grandparents and my parents. Listening to stuff like that growing up, I just wanted to do something that sounds that big, I can’t play half the instruments or sing like Sinatra but I’d love to do something like that. I love U2. It immediately makes me think of my mom because she’s the biggest U2 fan. Also the ambience in their songs, I strive to have something like that.

Q: What other hobbies and interests do you have?

A:I’m a huge hockey fan and sports in general. My favorite team is the Penguins. I’m a big video game nerd, and a sci-fi nerd. I’m a big Halo guy and Star Wars too.

Q: What advice would you offer to another young musician?

A: I tell people to have fun with it. When I was 16, not that I took it too seriously, but I didn’t have as much fun with it. Now that I’m having fun, I’m enjoying the opportunities I’m getting. I used to stress myself out to an extent where I wouldn’t enjoy the show, I wouldn’t enjoy what happened after shows, and everything else leading to that was a big panic attack. Now, having fun and getting a show offer is the coolest thing in the world.

Q: Can you pinpoint a particular moment in your life that has helped shape the person you are today?

A: I’ve had a decent amount of things take left turns when I wasn’t expecting it. I think that took the idea that everything is going to be OK at all points of my life away. It made me want to try harder. Even my grandfather dying, it was one of those things that was eye opening and life isn’t all roses, but I don’t want to sit and dwell on it. I want to live the best of my life like he did. I’ve been saying yes a lot more. On a personal level, the reason I connect so much with music is, I’m not a serious person, but music is one of the only things I can be serious about. I try to laugh stuff off but I use music as the time to be serious.

Q: Do you have anything to add?

A: The thing that I like is it’s all fun. We take it seriously but we don’t. By the time we’re on stage, we’re moving around, having beers, … I’d love to not miss any note while playing a song, but if I have more fun while doing it, it’s more fun for everyone involved. We always want to have fun while playing and I’ve fallen in love with that idea.