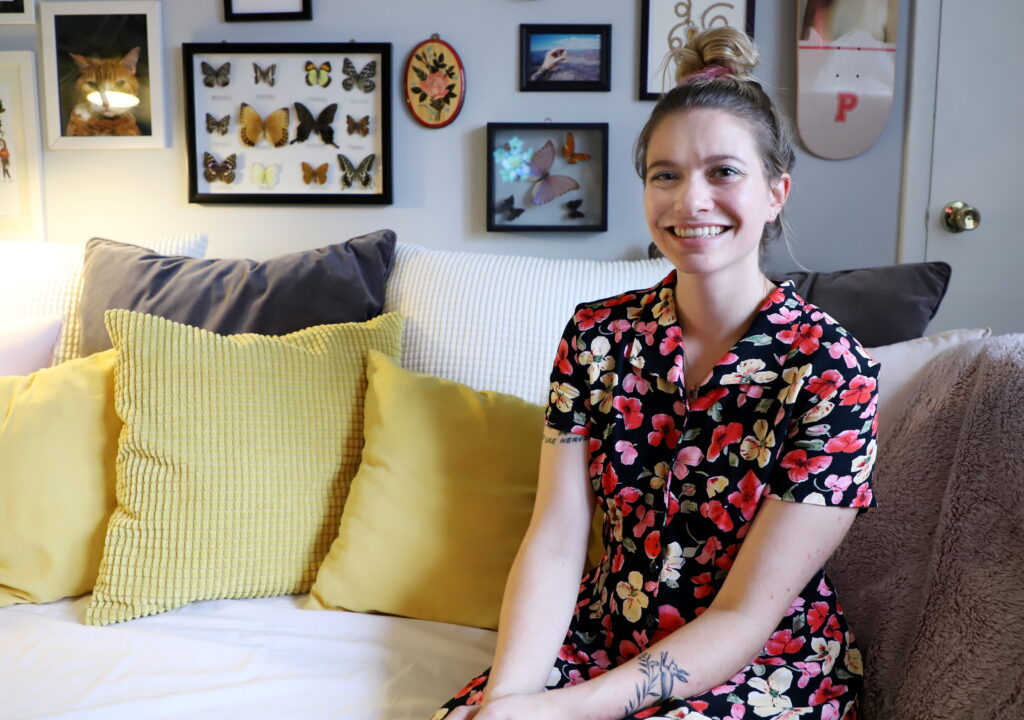 Brianna Collins has been pursuing different creative outlets artistically and musically since she was young. She is the keyboard player and a singer in Tigers Jaw, a band she has been in since her teenage years. Some of her art projects include doing the cover images for her band’s albums. She feels lucky to have had the opportunity to tour with her band across the world in Japan, Australia, South America and Latin America. When she is not playing music or learning about another country’s culture, she can be found teaching private art lessons. She is a graduate of Western Wayne High School, where her passion for art began. She also earned a bachelor’s of fine arts degree in photography from the Tyler School of Art and a master’s degree from the College of Fine Arts at Boston University. She is a certified Pennsylvania teacher for art education K-12. She lives in Kingston with her cats, Clover and Snake, but shortly will be setting out for a North American fall tour with Tigers Jaw. 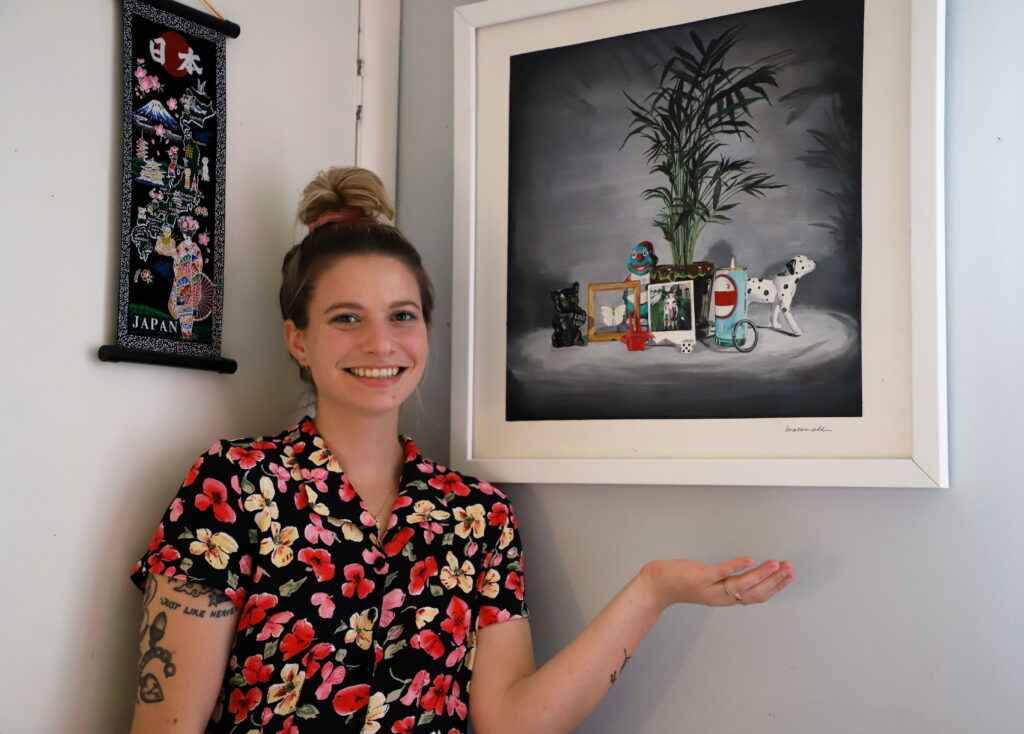 Collins displays the art she created for “Spin,” Tigers Jaw’s most recent album, which was released in May 2019.

I’ve loved making and creating since I was super young. I remember just loving art in elementary school. I was really lucky, Western Wayne had an amazing art program throughout all of my school career. It was probably my junior year of high school when I decided that I wanted to go to art school. I did Arts Alive two years in a row. It was super formative for me. I learned a lot about expressing myself through art. I kind of move all over between mediums. I like to challenge myself. I don’t feel like I’m good at drawing, but I love to paint and I love to take photos. I’m not really someone who draws or paints from life. I like to have a photographic reference. I went to Tyler [School of Art and Architecture] and that program was great because it encouraged me to take different types of classes that I may not have had experience with before.

As an art teacher, how do you hope to influence the students?

I’m doing private art lessons. One day I would love to teach high school photo or something. Teaching is something I love because it can be so gratifying. When I was in graduate school, I had to think about teaching, and a lot of what I learned is that art shouldn’t be an elitist subject. It should be something that everyone can participate in. The way that the culture in our society is is that once you’re done with the art that’s mandatory in your schooling experience, it’s either you’re good and you keep doing it, or you feel like you’re bad and you stop. There definitely is an argument for aesthetics and what art is good, but I think, especially for kids, that shouldn’t be what they’re graded on — if it’s good or bad. There are ways to design lessons and make it more conceptual and creative. People can’t help their artistic ability in the judgment of masters of art and aesthetics. You can grade on what you’re teaching as far as creative design skills and motivation, innovation, working collaboratively, just framing things more from the process and not the product.

Tell me about Tigers Jaw and its background.

I would consider us an alternative band, we’re an Indie band in the sense that we are writing our own music and it’s as much a do-it-yourself as we can while maintaining the fact that it’s our job.Tigers Jaw was a band already before I joined. At first, it was just Adam McIlwee and Ben Walsh who had started the band. It was always a three-piece. I had met Adam through mutual friends, and we became fast friends and clicked. When their keyboard player quit, I said I would fill in if they needed someone. I never necessarily thought I would be in a band. I love music. I loved going to shows, I loved being a part of kind of community. Growing up in Hamlin, when there wasn’t really a lot else going on, that was something we could all be a part of. I agreed to fill in for one show and they asked me to be in the band and that was it. 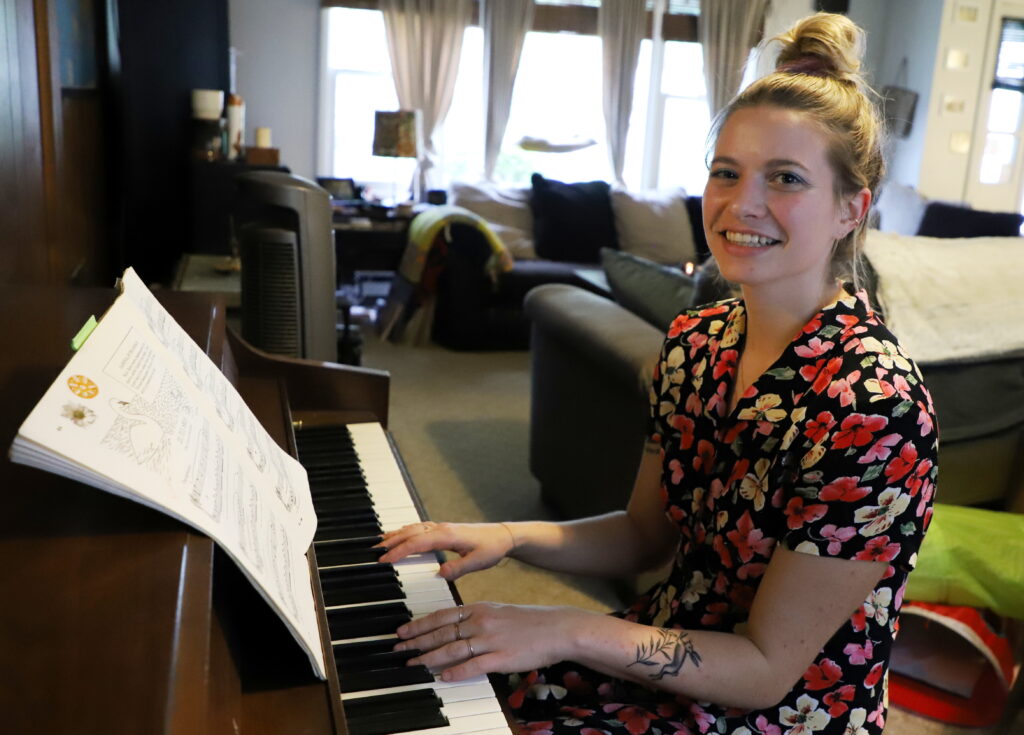 What are you most looking forward to in your upcoming tour with the Menzingers and Culture Abuse?

The Menginzers were one of my first favorite bands to go see. It’s really cool to see how we’ve all grown together as people and as bands. I’m excited to hang out with them. We toured with them one time in the U.K., and it was really short and it was super fun, but this will be the first time getting to go to different places together and getting to see them every night. I love their band, and I love Culture Abuse. A three-band tour is my favorite kind of tour. It’s been a long time since we’ve toured, and I love playing. We’re all ready to get out and do a tour.

How have you grown as a person so far in your 15 years with the band?

As a person I feel like I know myself a lot better now. I think it takes a long time to zone in on who you are. Life is obviously different. I was in high school at the beginning, and now I’ve finished graduate school and I’m almost 30. The biggest difference for me is my growth as a musician, and specifically, as a songwriter. I joined this band just having a classical piano background. What I play in Tigers Jaw isn’t like that. It’s not super percussive, it’s almost like another rhythm guitar. It sonically fills the space. I like it because it allows me to just have fun and play to the best of my ability. I’ve kind of self-taught myself to play guitar, and it was really Ben who encouraged me to to try writing songs, and now that is one of the things I do in this band. I’m so happy to be doing this. I love Tigers Jaw as a band apart from being in it, so it’s just cool to be doing what I love in that way. 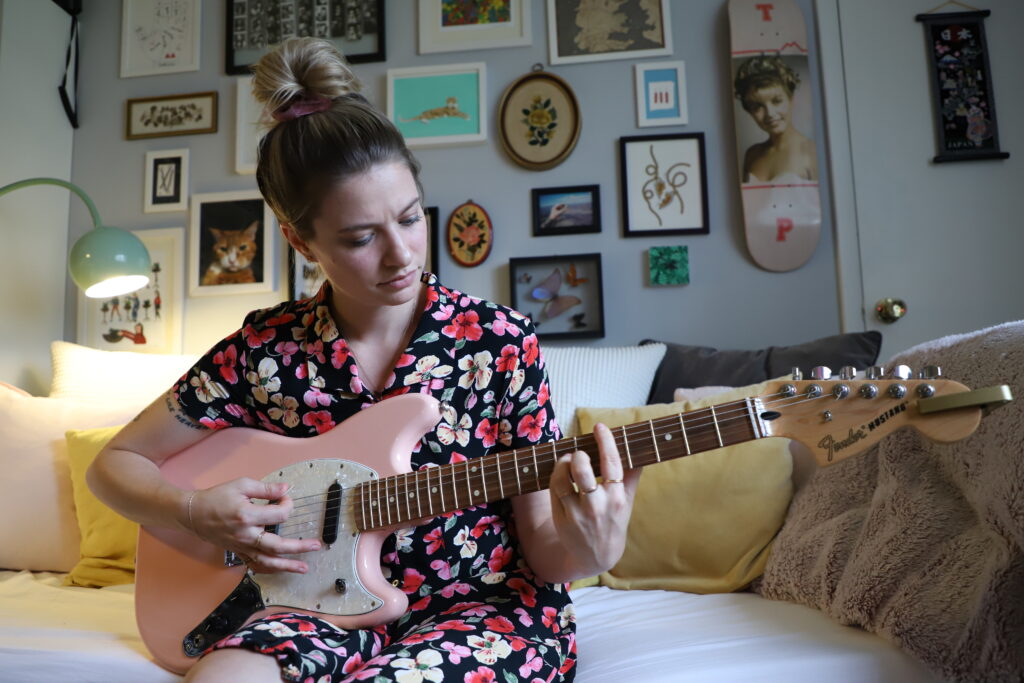 What musicians inspire you?

I’ve always loved Death Cab for Cutie, just their writing style, the lyricism, it’s so descriptive and poetic. I can listen to a record that I listened to when I was 15 and I still feel connected to it in the same way. I love Paramore, they’re one of my favorite bands. They’re also a band that has gotten to an amazing point and worked hard and stayed a band throughout it all. I love the Cure. At least right now, those are who I’m thinking about while I’m writing. While I’m personally trying to write, I’m thinking about their songs and why I love their music. If I want to make music, I want it to relate to what I love about music.

What has been the proudest or most exciting moment in your musical career?

Putting out “Spin” [in May, 2019] was super monumental, because it was the first time I’d personally written songs, and it was terrifying. I couldn’t have anticipated the anxiety that came with it. We put so much work into it, and I felt so connected, but it could still be something people don’t like and you can’t prevent that. That was huge for me. Also, the first time we played in South America was the first time I felt the power of what we were doing. Not a lot of bands that are our size get to tour South America. People responded so passionately and were almost thankful we were there, but we couldn’t have gone there without them. It was symbiotic. 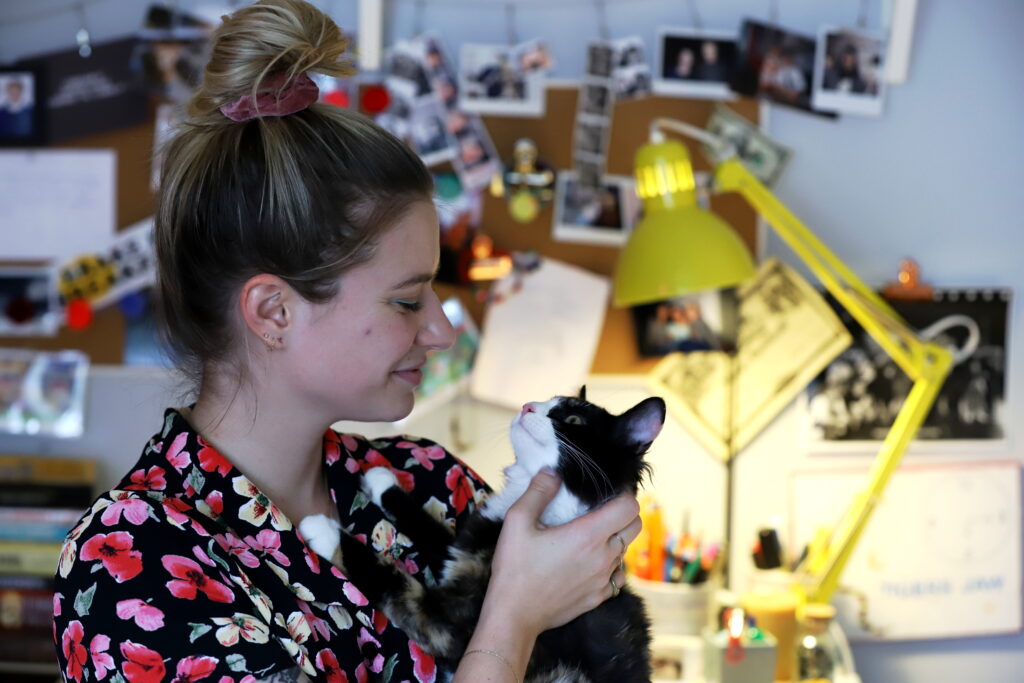 What other hobbies and interests do you have?
It seems trivial but I love TV shows, I love “Game of Thrones.” I loved reading Game of Thrones too. I just finished watching “Chernobyl,” and I then bought two books about Chernobyl to read. So much of what I do forces me to zone in and focus, and that’s something I find really hard. I’m really lucky to have a great group of girlfriends, and we try to hang out as much as we can. Outside of work, the biggest thing for me is nurturing the relationships in my life because I’m gone so much. I would love to start volunteering at animal shelters, too. I love animals, cats especially.

Is there a person or a piece of advice you’ve received that has motivated you along your journey?

I’m looking at a Beyonce quote, it’s “I dream it, I work hard, I grind ’til I own it.” Growing up around here, it’s a blue-collar community, work ethic is instilled in us. If you want something, you have to work toward getting it. Having dreams and working hard to make your dreams happen versus just working for a job is so important. That’s been my life, trying to make sure I’m doing all the things and working toward the goals I want to accomplish. 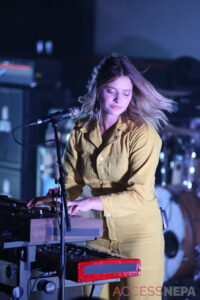 Collins performs with Tigers Jaw in a concert at the Ritz Theater and Performing Arts Center in Scranton in October, 2018. Emma Black / File Photo 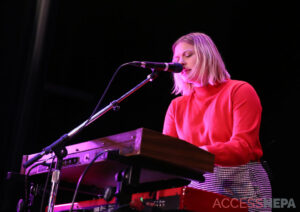 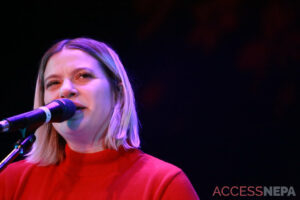 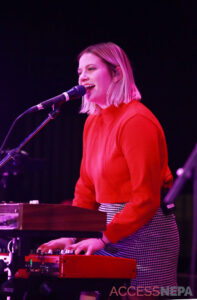 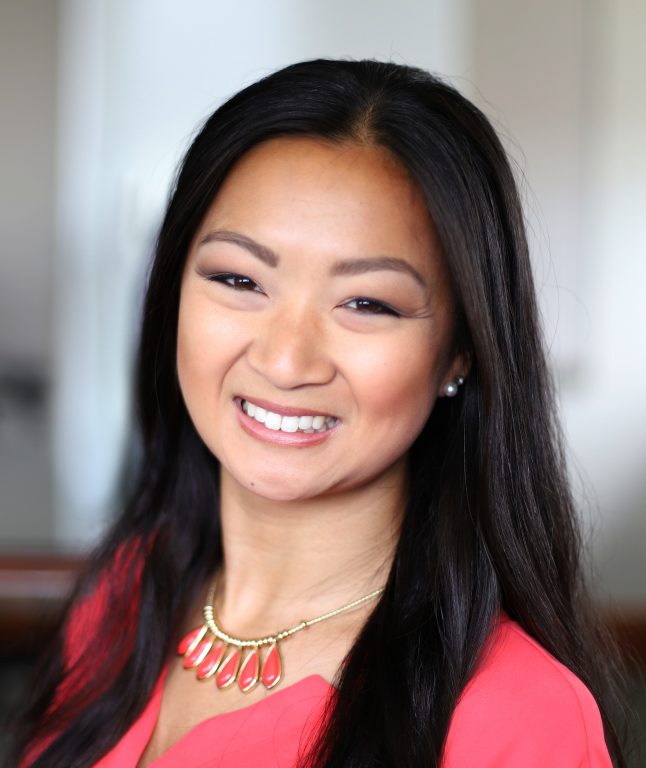