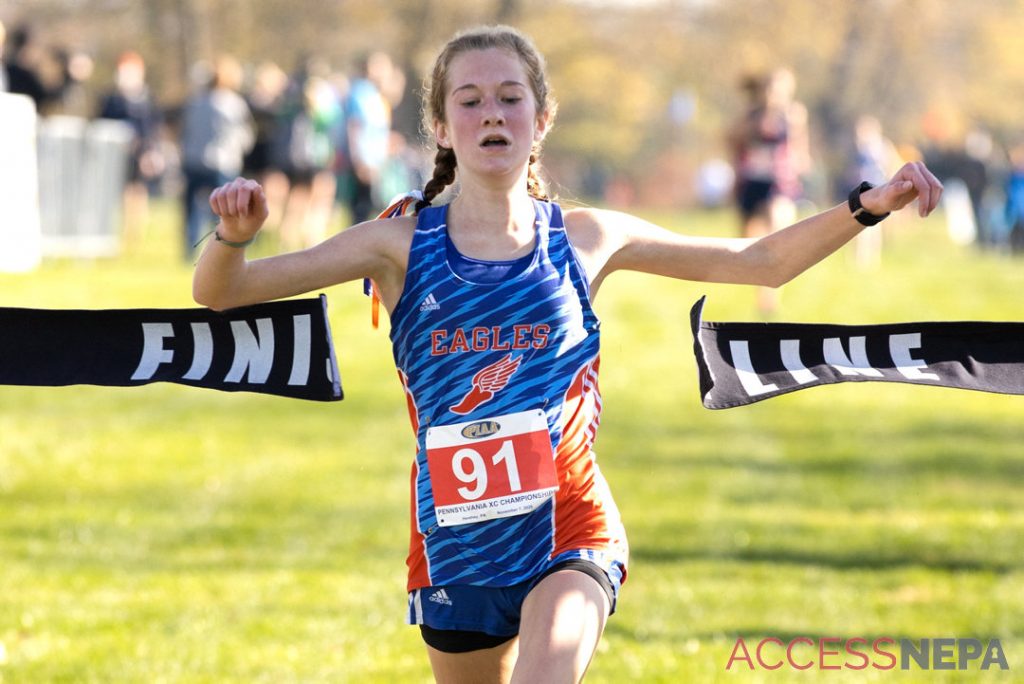 There is a youth movement that seems to indicate a bright future for Lackawanna League cross country.

Fifty-five runners from league qualified for Saturday’s PIAA Championships in Hershey as either an individual or part of a team. Just 16 of those runners are seniors. Twenty-one runners are either freshmen or first-time sophomores at states.

“This is a really big confidence booster for myself,” Flynn said. “I have good wishes for upcoming seasons.”

Riverside sophomore Lacey Danilovotz placed sixth in Class 1A girls in her state debut, while freshman brother Daniel was 13th in Class 1A boys.

“I hope to improve my time (17:20) a little more and get out to a better start,” Daniel Danilovitz said. “In the years ahead, I really hope to improve both those aspects.”

“I went into the race with a very positive mindset even though I knew the course was going to be difficult than other course I’ve ran before,” Dahlgren said. “I went out really strong and I tried to hold it throughout the race. The last 800 (meters) I started to feel a little more tired. But I pushed through.”

Finishing four spots shy of a state medal was a bit disappointing. But Dahlgren said it will motivate her to get back to Hershey.

“I really wanted it this year,” she said. “If I keep working as hard as I do, I think I can be up there next year.

“States was amazing and a lot of fun.”

Sophomore Aiden LaTourette, also from Honesdale, ran at states for the first time. He was 76th in Class 2A boys in 18:32.

“I didn’t know what to expect going into it,” LaTourette said. “I went out a little hard and tried to hold it, but I ended up falling back because the course ended up being hillier and harder than I expected. But it was a good experience. I’ll have a feel for it next year.

“I’m pretty satisfied with my place, especially because this season almost didn’t happen with corona and everything. I’m just grateful I was able to have the experience and hopefully I’ll be back there next year.”

Scranton freshman Brian McCormack made his state debut in the difficult Class 3A field and finished a respectable 78th in 18:13.

“Freshman year was for the experience and to see the course,” McCormack said. “I really motivates me to get back there. These two weeks that I’m taking off from running are going to be tough. But I just really want to train in the winter for track, then once summer hits work really hard to get back there. I want to improve a lot from this season to next season. Just get better.” 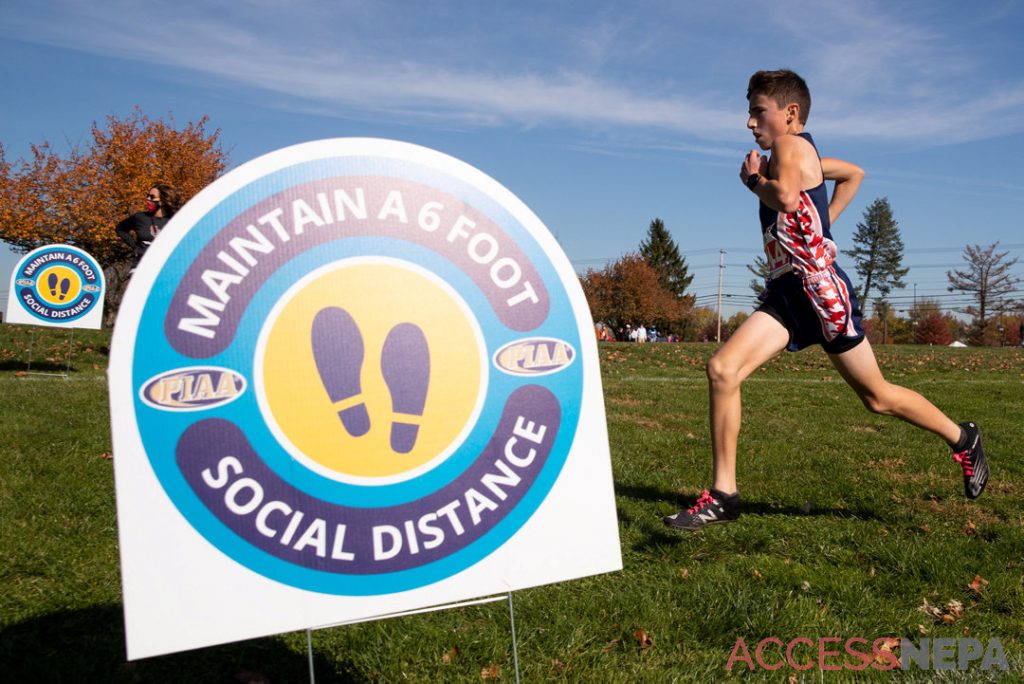 CHRISTOPHER DOLAN / STAFF PHOTOGRAPHER
Riverside’s Daniel Danilovitz approaches the finish line in the Class 1A race at the PIAA Cross Country Championships in Hershey on Saturday.

Abington Heights senior Abby Marion qualified for states all four years of her career and capped it by finishing 70th in Class 3A girls in 20:20.

“We knew we wanted to go a little fast because we were in a heat with some really good teams. It was going to be a fast race,” Marion said. “First mile, everyone looked good, we stayed together. We separated a little bit after the first mile. I started to really feel it, it was hot out today. It was kind of a blur to the finish.

“I’m just so proud of my teammates. I told them before the race we just have to come out and enjoy this. It didn’t feel enjoyable during, but I’m just happy to be here.”

Wallenpaupack senior Kyle Kellstrom was also a four-time state qualifier. He finished 103rd in Class 3A in 19:19.

Delaware Valley senior Adam Kanterman was 71st in Class 3A in 18:02 in the final race of his high school career.

“I started off next to dead last, but I’d say on the hills I started picking people off,” Kanterman said. “The heat really got to me. I’m just happy to finish. This is my last cross country race ever in high school and I couldn’t have finished it off better. The last six years at DV have been the best. I’m going to miss it.”

After finishing second in Class 3A at the District 2 Championships, North Pocono junior Caleb Kenyon hoped to rebound in his first state race. He placed 32nd in 17:09.

“My goals were set a lot higher; I was hoping for a top 10,” Kenyon said. “It didn’t work out for me this time around. I’m hoping to come back next year strong and healthy. Hopefully no more injuries.”

Kenyon did not run for about two weeks prior to districts and states.

“It’s been tough. I’ve just been trying to get back to where I was earlier in the season,” he said.

“States was a fun experience and memorable. I’m excited to get back here. I have big things planned for next year.”

Elk Lake junior Krista Jones missed out on a third straight state medal in Class 1A. After finishing 17th as a freshman and fourth as a sophomore, she was 32nd in 21:57.

“I felt like I got a really good at the start; I was out with the front pack,” Jones said. “Once I got to the mile mark, my arms started feeling weak and numb. Then everything started feeling weak. As I kept going, it kept getting worse. The last hill, I could really feel it. On the finishing stretch, I was just trying my best to get across the line.”

Scranton sophomore Bella Noreika finished 56th in Class 3A girls in 21:22. That was five positions better than last year when she placed 61st in 19:59 as a freshman.

“Last year I came in with no expectations,” Noreika said. “I was actually hoping for top 40 (this year), but I’m happy I placed lower than I did last year. My time was slower, but the heat played a big part.”