After a shutdown of 78 days, gambling resumed at 12:01 a.m. PDT Thursday in a changed Las Vegas.

“This is history,” said Donna Alexander, who came with her nephew, Eric Sanchez, from San Antonio to join the reopening throng at the Golden Nugget downtown.

“We’re just so excited to see Vegas moving again,” said Alexander, who usually visits three times a year. The shutdown “literally made me cry,” she said. “I like to gamble, but it’s the people, really.

“I just want Vegas to be normal.”

Near her on the floor stood Teddy Willoya, who had traveled 2,300 miles from Anchorage, Alaska, that day to play craps, he said. Willoya said he would stay through Monday, “maybe longer. Depends how things go.” 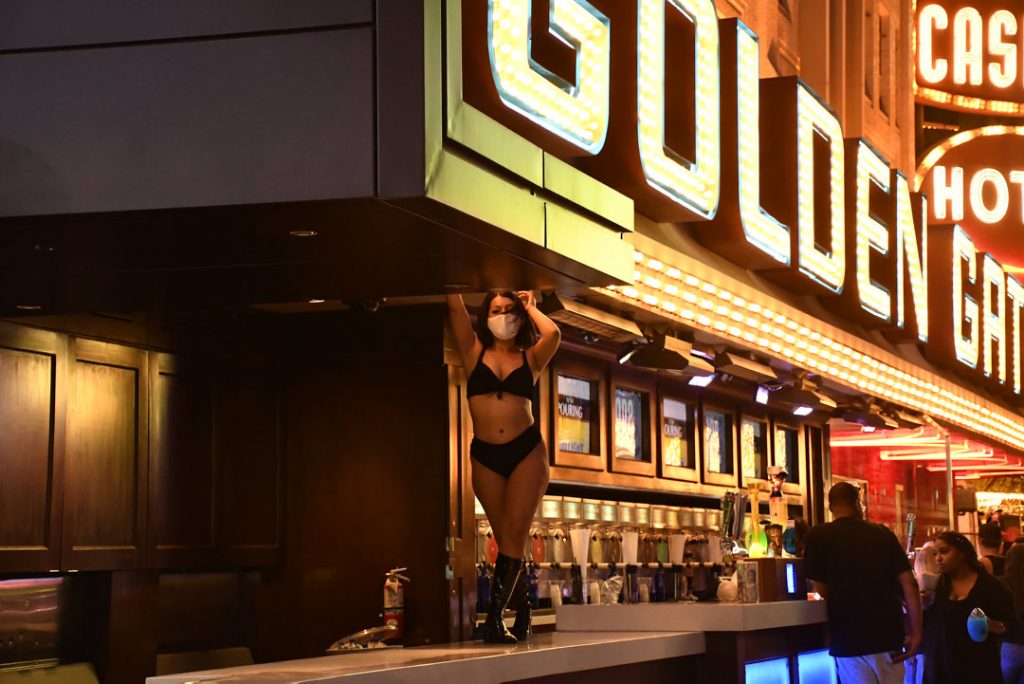 Patricia Gonzalez of Glendale and Tammy Bollinger of Sierra Madre, who said they were relieved to be out of chaotic Greater Los Angeles for a few days, checked into the Bellagio on Thursday morning, where they would celebrate Bollinger’s birthday. The timing was coincidental, but they said they were happy and unfazed by pandemic worries.

“We got advance reservations at restaurants and the pool,” Bollinger said. “I got a cabana so we won’t have a lot of people around us.”

The thousands of visitors who turned out Wednesday night and Thursday were facing higher, grimmer stakes than on previous visits, navigating public places in mid-pandemic and amid a national upwelling of protests over police brutality and the death of George Floyd.

What drove them to come in such times? Stir-craziness, several said.

“I’m tired of being cooped up,” said Cuong Tran, who had flown in from Dallas on a mostly full flight. He added, however, that the widespread protests worried him.

Violence in Las Vegas included two shootings Monday night and early Tuesday. In one, an armed man was fatally shot by Las Vegas Metro Police near the city’s federal courthouse. In the other, a police officer was shot in the head near Circus Circus casino and was reported in critical condition.

Most travelers interviewed said they had made their plans before those incidents unfolded. Arriving, these travelers found an abridged Las Vegas: Many stores and restaurants are still closed, virtually all live entertainment is forbidden and all visible workers are under orders to wear masks (although many guests, given the option, chose not to). Also, the temperature Thursday afternoon was expected to top 105. 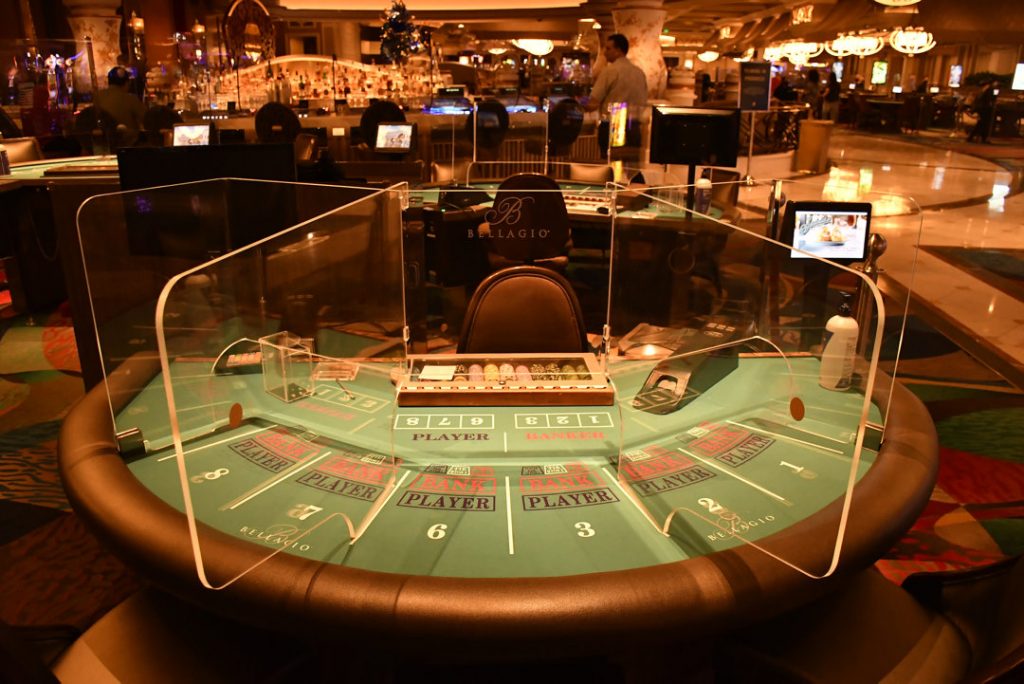 CHRISTOPHER REYNOLDS / LOS ANGELES TIMES / TNS
Plexiglass barriers have been added to many gaming tables in the Bellagio casino in Las Vegas as gaming resumes after a 78-day pandemic shutdown on Thursday, June 4, 2020.

Still, people came. The result, on Thursday, was a singular pop-culture moment: the awakening of America’s leading hedonist playground at a time of risk to the nation’s physical and psychological health.

“It’s a little bit weird” to be working when so many are protesting, Bellagio bartender Alec Williams said. But he was glad to be on the job.

“We’ll see how it goes,” said Ron Hornik, stationed at a Bellagio craps table awaiting his first customer (who would be required to wear a face covering because of the game’s relatively intimate dimensions). A hotel spokeswoman said that as it adapted to new anti-pandemic measures, it would aim to reach no more than 30% of its usual capacity.

“Everyone has been good,” said Emyli Augustine, an EMT who was checking the temperatures of Bellagio guests as they lined up at the reception desk.

At the Venetian, gondola rides are again offered, but gondola drivers are no longer singing (to reduce virus transmission risks) and prices are higher because the vessels’s capacity is limited.

The conviviality and excitement of a crowd craps table will likely disappear when Caesars Palace reopens. State regulators will limit craps games to six players at each table.

Many downtown hotels chose to open at midnight, giving them half a day’s head start on the often-fancier casinos on the Strip, which mostly chose to wait until midmorning or later. The Bellagio’s iconic fountains resumed frothing at 9:30 a.m., followed by the resumption of gaming. Within a few hours, Wynn Las Vegas, Encore, Caesars Palace, Venetian and several others were open as well.

Fewer than half of the Strip’s casinos have reopened so far, but most have stuck to schedules set before the last week’s burst of protests. A few, citing strong demand, moved up their opening dates.

About 15 casinos on the Strip expect to be open by the weekend, including the Strat, Sahara, Circus Circus, Treasure Island, Harrah’s, the Cosmopolitan, MGM Grand, the Signature at MGM Grand, New York-New York and Tropicana.

Tony Romo, a Las Vegas local who is partial to slot machines, said he came because “I wanted to be a part of it.” Michael Gorbe of Las Vegas, who usually plays the slots two or three times a week, came for the same reason, and brought his dog Zephyr to see and hear his master’s vice.

Plexiglas barriers have been added to many gaming tables in the Bellagio casino, Las Vegas, for its Thursday reopening.

There was mumbling at the slots, hooting at the craps tables. Within 10 minutes, the stools at Claude’s Bar in the Golden Nugget were full, well, every other stool, at least. Social distancing.

For many in Las Vegas — especially those thrown out of jobs during the casino shutdown — the whole reanimated casino scene was a welcome change.

“We picked up a good number of reservations today alone,” said Wade Nakamura, front desk manager of the Golden Nugget hotel downtown, as he checked in a guest Wednesday afternoon. The next morning he estimated that the 2,400-room hotel was as much as 15% full.

Many of the guests in the lobby were unmasked, while all workers (including the lifeguards overlooking the Golden Nugget’s pool) wore masks, as required by public health officials.

“We do have to take your temperature,” Nakamura told an arriving guest. “I’m going to have him zap you real quick.” And then, to sign in, “We have a pen that I disinfected earlier.”

A colleague quickly put a thermometer within an inch of the guest’s forehead and gave the OK. 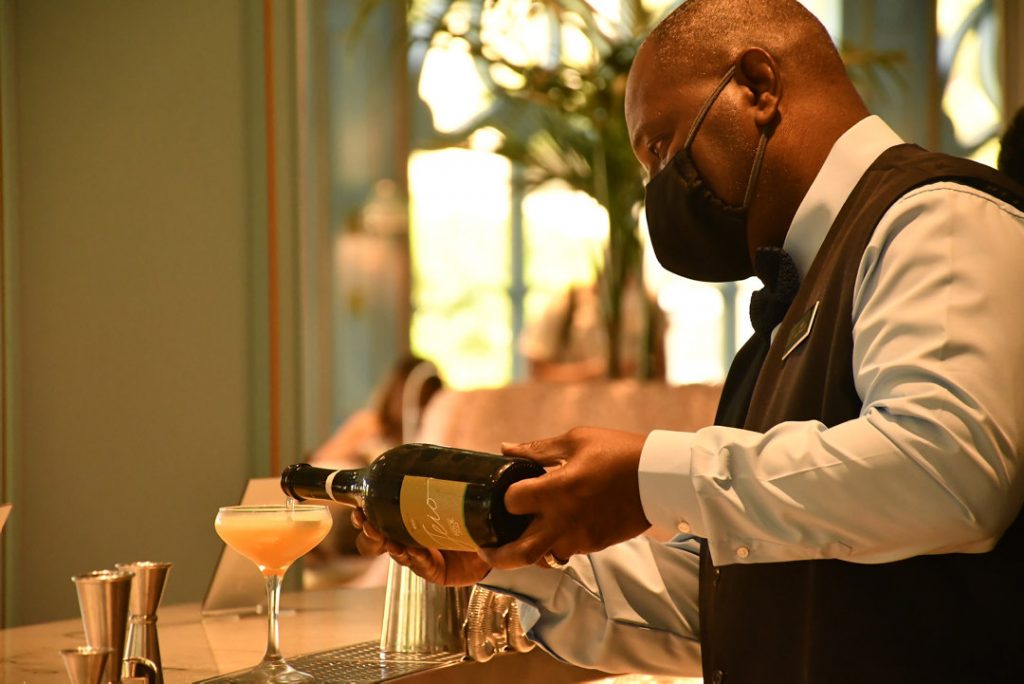 Meanwhile in the Claim Jumper restaurant, waitress Chrissie Douglas was rushing from guest to guest, dodging tables that have been idled by social distancing requirements. It was Douglas’ first day back to work.

And now, “We hope to God our Californians come back,” she said.

At the sidewalk bar of the D Hotel on Fremont downtown, bartenders Khin San and Kiyona Adams were making drinks for a handful of customers Wednesday night, hoping more would appear in the run-up to midnight, when several of the downtown casinos would reopen.

San said she was relieved to be on the job again but nervous about the timing. “With all the protests, I don’t really know. We planned the reopening before that,” she said.

A few blocks away on Fremont Street, a dancing bartender gyrated on an outdoor bar top in a bikini and mask. In the other direction, a protest was winding down and several young men had headed toward the bar, including one whose sign said, “My murder might be televised.”

For restaurateur Maurice Sweiss, whose Ali Baba Las Vegas restaurant and nightclub are still closed, this week’s opening is one step in a longer journey. Once his place opens in a few weeks, Sweiss said, he’ll have 18 employees back at work, but “we’re going to be operating at 50% capacity” because of new health rules.

“I’m just going to hope for the best, hope that in a couple of months we’ll be at full capacity. It’s a hard climb right now.”