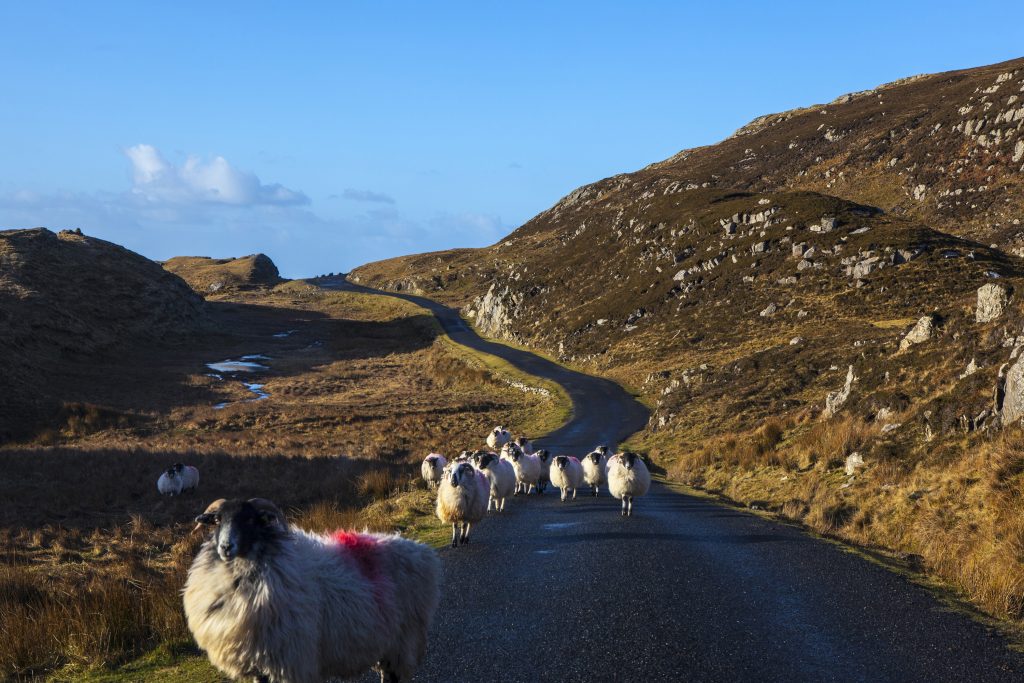 Ireland’s ‘Wild’ side: Exploring a quieter corner of the rugged West Coast

BALLINA, Ireland — I bounced the rental car slowly up the narrow, one-lane road and pulled up near the only other car in the unpaved parking area. My family and I tumbled out and looked up at the very, very long mountain path that disappeared into the cool mist.

As I put on my warm coat, my brain wandered back to that lovely little pub with the smoking chimney we passed a mile or so back on the main road.

My family was undaunted, however. So we started walking.

What unfolded was a lovely 5-mile roundtrip trek on the Pilgrims Path at County Donegal’s Slieve League Cliffs. The soaring sea cliffs are a stunning attraction on the far northwestern tip of Ireland, near the uppermost end of an area dubbed the Wild Atlantic Way. The views of the mountains and valleys, even in the mist, were worth every step. And they made the eventual visit to the aforementioned pub all the more rewarding.

Outings like this were at the top of our short list of expectations for an off-season visit to rural Ireland, when daylight is scarce and clouds and rain are plentiful. Our odd timing was driven by the desire to visit our son, wrapping up his fall semester in Dublin. But there’s a certain beauty in visiting a place that is beautiful no matter when you go.

Each of our four days in the counties of Donegal, Sligo and Mayo included plenty of fresh air and walking — pursuits rewarded with comfortable chairs, warm fires and equally warming beverages. Would we have seen more and done more if we’d been there in August? Probably. But I bet we would have also spent more time checking off “must-see” boxes, and less time checking in with each other — easier to do on a long, uncrowded walk or in a quiet pub.

Accommodations are key in off-season travel, when you long for more than just a clean room at the end of a long day. We wanted places we could settle into. Rathmullan House in Donegal was an easy choice for our first stop. My wife and I stayed here on our inaugural vacation as a couple more than 25 years ago, before we were married. It’s always nice to revisit a place that reminds you of falling in love.

After a bracing walk along the waters of nearby Lough Swilly, we freshened up and hunkered down for a relaxing drink by the fire. It was a new parental experience in a country with a drinking age of 18. My 20-year-old son and I sipped a Yellow Spot Irish whiskey, a magnificent discovery for me. And my 17-year-old daughter had her first half-pint of Guinness, gamely turning down the offer of “a wee drop of black courant” to ease the taste. (We were told she could imbibe as long as she was with her parents.)

Rathmullan House’s Cook & Gardner restaurant offered a delicious first meal. With the glacial fjord of Lough Swilly just outside the window, we all went heavy on the fish offerings and weren’t disappointed. 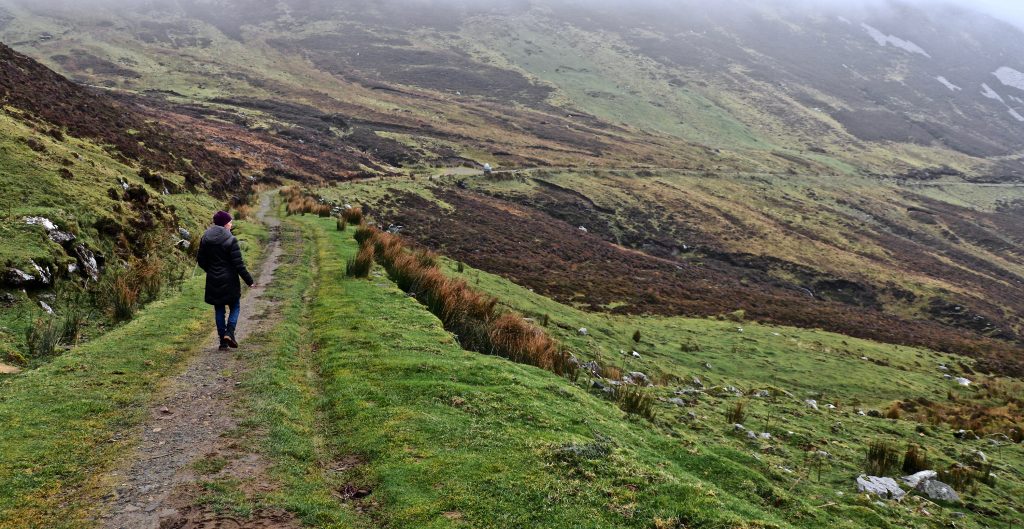 JOHN CARPENTER / CHICAGO TRIBUNTE / TNS
The writer’s wife, Mary Carpenter, walks along the Pilgrims Path near Teelin in County Donegal. The West Coast of Ireland is best explored on foot.

My early morning walk the next day, while the family slept, was another quiet pleasure. A short path through a stand of woods left me alone on a vast beach at low tide. It’s a popular place for horseback riding. I waited to see if some riders might thunder past on the firm sand, as they did on our visit 25 years earlier. But none came.

After a few deep breaths of cool sea air, I wandered back to the hotel for the first of what would be four consecutive “full Irish breakfasts.” My plate was covered with a fried egg, two “bangers” (sausage links), two pieces of Irish bacon (resembling ham more than our traditional strips), one portobello mushroom, a tomato and the obligatory and mysterious white and black “puddings” — sausages made from pork blood, oatmeal and other spices.

Breakfast complete, we headed back to the cliffs of Slieve League. While our earlier hike up Pilgrims Path ended in a veil of mist, intelligence gathered afterward at The Rusty Mackerel pub in Teelin pointed us to an alternate route that culminated with a short walk to the top of the cliffs. We took in spectacular views from a perch nearly three times higher than the venerable and more-visited Cliffs of Moher a few hours south down the coast.

The next stop was the relatively new Ice House hotel in Ballina. My wife, who has a New Age streak, discovered it in Ireland’s Blue Book of country house hotels, castles and the like. She was drawn to its spa. I was sold on its waterside location and restaurant reviews.

Many rooms, ours included, have balconies a few feet from the River Moy. With rain in the forecast and our son back in Dublin for classes, wife and daughter decided on a local hike followed by quality spa time. I fired up the rental car and headed along the ocean road south toward Westport.

Devotees of the legendary Chieftains flutist Matt Molloy make pilgrimages to this picturesque village to visit his eponymous pub, a venue for traditional Irish music seven nights a week. It being the morning, I settled for a walk around town and stumbled upon West Coast Rare Books, a wonderful little shop that I did not leave empty-handed.

The Wild Atlantic Way is a tourist-attraction name, to be sure, meant to draw visitors west from Dublin and get them to explore beyond the scenic Ring of Kerry in the southwest corner of the island. Spanning 1,500 miles of roads along the country’s West Coast, the area lives up to its wild name. The land is rugged and hilly, alternating between unspoiled fields of heather and thorn bush and neatly walled patches of farms, all scattered with roaming sheep.

Even on a solitary drive on a cloudy day, it’s a road with views that command you to stop, as I did many times.

That night at dinner, the Ice House restaurant was further proof that Ireland has long since shed its reputation for mediocre, boiled-to-oblivion food. My seared hake was close-your-eyes-and-moan good, and my wife and daughter raved about their locally sourced salmon.

Afterward we enjoyed another friendly pub in the hotel, teaching my daughter that drinking in Ireland is less about the quantity and more about the quality of conversation.

As if on cue the next day, rain started as we left the Wild Atlantic Way on our drive back to big-city Dublin. Our trip was a welcome reminder that while Ireland has modernized since the heady Celtic Tiger economic boom of the ’90s and early 2000s, it’s still a place with vast, beautiful landscapes best enjoyed on foot