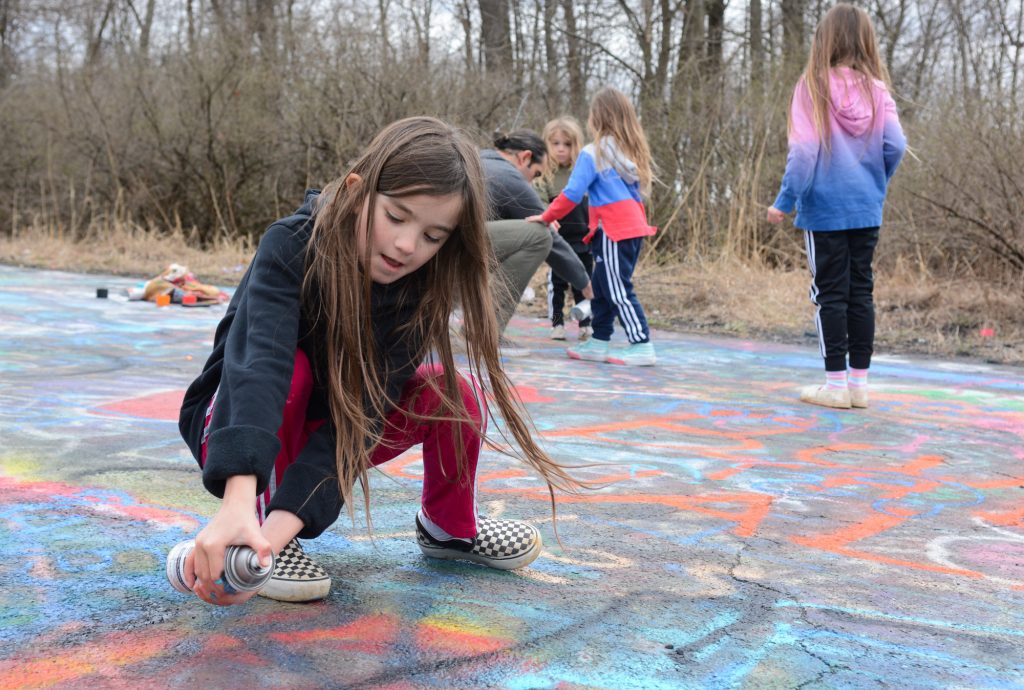 CENTRALIA — Large amounts of visitors to the “Graffiti Highway” are not only endangering their own health in light of the COVID-19 pandemic, but also those who react to emergencies.

In addition to the closed section of former state Route 61 at Centralia, many of those visitors have been trespassing on the property of Assumption BVM Ukrainian Catholic Church, located on the hill above the borough in Conyngham Twp., Columbia County.

This past weekend, mainly due to good weather and with many people not working because of the pandemic, the former highway was filled with people, many who drove to the site and then walked in, and many others arriving by all-terrain vehicles and motorcycles.

This past Sunday had another issue at the site with a bonfire being started in the middle of the road, prompting two fire companies to respond.

Aristes Fire Company No. 1 Fire Chief Gregory Yeager said this past weekend had more visitors that other times.

“Obviously this past weekend has been worse,” Yeager said. “It started around Thursday. There was a lot more traffic than there had been. Yesterday (Sunday) was probably the largest that it has been. There has been an increase in traffic there since January. Our first call this year was on New Year’s Day for an ATV crash.”

In responding to emergencies, especially at this time, Yeager said, “We put ourselves in harm’s way. Since this whole coronavirus started, Sunday was the first time we were called down there in that time frame for an emergency.”

Yeager said the bonfire was made of branches and leaves and debris that were placed in a fracture in the road.

“There was probably at least 30 ATVs and side-by-sides there congregated in that area, along with four-wheel drive vehicles. There were people walking around, and other people who were not part of that group surrounding the fire,” Yeager said. “There were probably 200 people or better, and we didn’t walk the whole length of the highway. There are people from all over — New York, New Jersey, Maryland, Massachusetts, Delaware, plus the ones from Pennsylvania.”

Yeager said the property owner, Pitreal Corp., a subsidiary of Pagnotti Enterprises Inc., Wilkes-Barre, has posted new “No Trespassing” signs. The company received the property in 2018 when the state decided to abandon or vacate it as a public road. 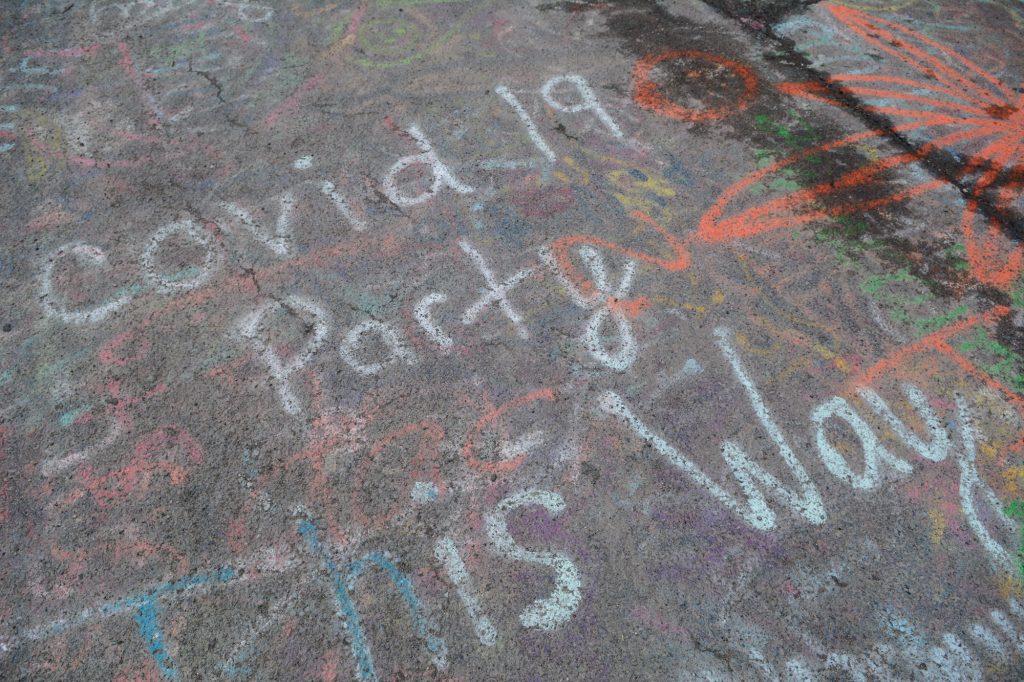 “COVID-19 party this way” is graffitied onto old Route 61, Graffiti Highway, in Centralia.

When the Aristes company arrived at the scene and saw where the fire was located, it could not access the site and called Wilburton Fire Company No. 1, which can access the site using its brush truck.

“When Wilburton went to put the fire out, they were confronted by several individuals who essentially became aggressive and verbally abusive to the crew assigned to extinguish the fire,” Yeager said. “And a bunch of those people left the area and came past where we were and were using very vulgar language and obscene gestures as they were driving past us in displeasure of us for being there to disrupt their illegal party.”

Yeager said that the incident did end with a peaceful resolution and the fire was extinguished.

The fire company, under the direction of Yeager, posted the objections about the behavior of so many people with complete disregard to the quarantine recommendations from Gov. Tom Wolf, the Centers for Disease Control and Prevention and the state Department of Health at the area of the Graffiti Highway.

“It is becoming a huge hangout/visitor stop, creating multiple safety concerns for the public and our responders,” the post states. “The (fire company) just returned from a bonfire in that area that was called in by a concerned citizen, This does several things:

It forces our volunteers to be deployed for a response that should not happen. It is dry out with a breeze/wind. There is no outdoor burning allowed in Conyngham Township unless it is on an approved burning receptacle and the land being used is not owned by the people who are burning on it.

With the current status of the world and the COVID-19 pandemic having groups of 30-plus are not to occur and again our volunteers could be exposed to such. There were license plates leaving the area from New York, New Jersey and other areas that have a much higher positive testing rate than our area.

The post continued, “We are a public service entity and as such are here for everyone’s safety. When we are requested for a response to a call, we respond. Individuals who are offended, put off or otherwise upset with our presence can just walk/drive or whatever away from our location. … If you don’t like that the fire department shows up and extinguishes your fire or assists a fellow rider who is injured, try having it in your own backyard and not in ours.

The Assumption church property had its own problems with trespassers at the church and the nearby cemetery, according to the pastor, the Very Rev. Archpriest Michael Hutsko.

“It’s not just Graffiti Highway, but it’s the entire town is overrun,” Hutsko said. “It’s become a haven for four-wheelers and off-road vehicles. They’re not just driving on the dirt roads back in the mountains, but they’re driving on the streets of the town. There on Route 61 and Route 42, and I’m not talking about two or three. I’m talking about dozens. Yesterday came to a head because there was an excessive amount of drinking, an excessive amount of vandalism throughout the entire town, painting the streets, painting the road signs and the metal guard rails, painting over the no trespassing and private property signs. There is a total lack of respect for property.”

The church property has also had its share of trespassing.

“We have had trespassers on a daily basis and people ignoring the private property signs,” Hutsko said. “There were people trying to get in the door and get in. The building is alarmed and has video cameras. We’ve provided the state police with videos and nothing gets done. Why is it allowed to go on in Centralia? It is very disturbing.” 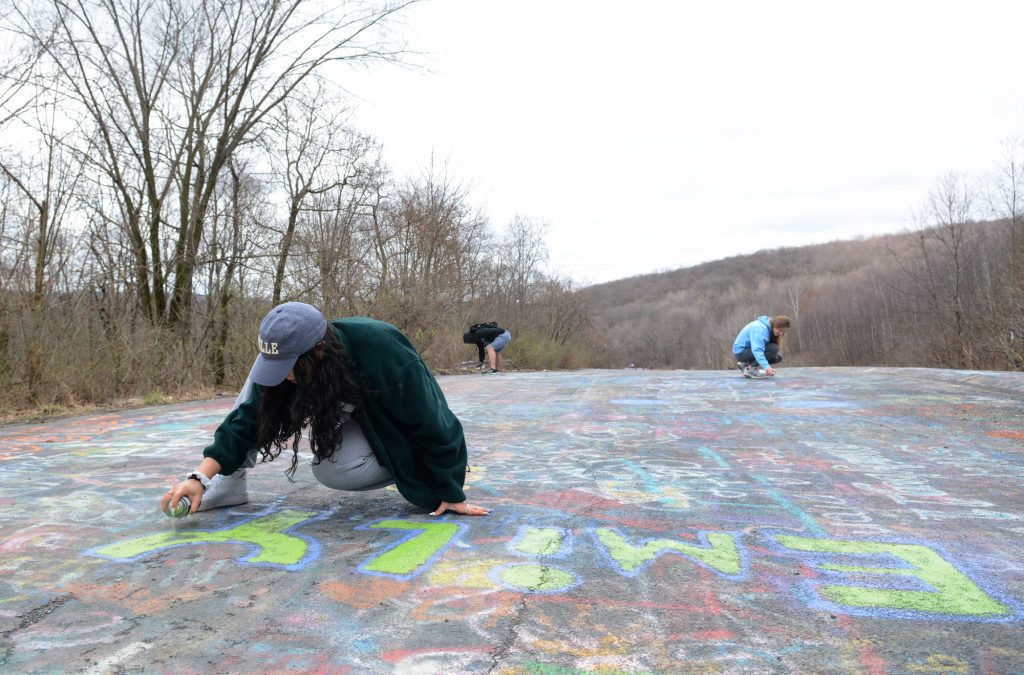 Emily Hessling, of Easton, foreground, spray paints her name on Graffiti Highway, old Route 61, in Centralia. Hessling, a high school senior, is out of school until at least April 6 under Gov. Tom Wolf’s order to prevent COVID-19 spread. Hessling came to Graffiti Highway for something to do because she finds it “pretty.”

Hutsko also noted the large amount of people in the area despite the coronavirus warnings, saying that people are coming from states that have more virus cases than Pennsylvania.

He called the illegal activities in the area as “wanton lawlessness.”

The situation at the church had Hutsko there during Sunday afternoon.

“I was there for six hours, from noon to 6 o’clock. At that point, several of my parishioners came and said for me to go home and they would watch the property,” he said. “It was a constant flow of people attempting to access the property, to access the cemetery, and when I asked them to leave, it was the same experience as with the fire department. They curse at you and get sarcastic with you, even with me.”

Hutsko said that he was dressed in his “blacks” that identify him as a priest.

Hutsko has discussed the matter with the state police, and he understands their inability to respond at all times due to the lack of manpower. The area is covered by the Bloomsburg station.

“I can understand that, but we do have a situation that is lawless,” Hutsko said. “Our next step is to get politicians involved and make them go there and look at it and explain why this is allowed to happen. We’re not doing that now because everyone has their hands full with the coronavirus and Centralia is down the list of priorities when it comes to fighting the virus. But when this health emergency passes, we intend to request a meeting with state representatives and senators to tour the area.”