9 ‘foodie towns’ in PA worth visiting

If you’re hungry for adventure or just looking for an excuse to leave town, Pennsylvania is packed with delicious road trips.

We suggest you hit the highway or back roadways for a taste of what’s to love about the state. To assist you, we’ve crafted a list of “foodie towns” — those stops with equal parts fun attractions and a decent offering of restaurants, inns, coffee shops and breweries, among other stops.

For this list, we steered clear of the obvious cities like Philadelphia and Pittsburgh with active restaurant scenes. Here are nine towns to check out:

You might not recognize Farmington but you’ve likely heard of Nemacolin Woodlands, a backdrop for “The Bachelor” and a destination resort with skiing, golfing, swimming, spa treatments, casino gambling and more. Nearby attractions include Frank Lloyd Wright’s Fallingwater, Fort Necessity National Battlefield and Ohiopyle State Park with hiking, camping, waterfalls and more.

You’ll find a variety of spots to eat from coffee shops to casual cafes and fine dining spots. Bittersweet Cafe serves sandwiches and drinks with indoor and outdoor seating, while Maywood Grill serves large portions of made-from-scratch foods such as burgers and pizza with self-service. In Ohiopyle, check out the Falls City Pub with house smoked meats, wings and sandwiches or Paddlers Pizza for hand tossed pies and cold beer.

If you’re staying at Nemacolin, reserve a table at the high-end Lautrec with European-inspired cuisine or Aqueous with fresh fare influenced by the sea.

The York County borough situated between Gettysburg and York, is named after a town in Germany.

Nearby attractions include Codorus State Park, a draw for legions of outdoors enthusiasts for hikes, camping and kayaking; the Clarks Outlet with shoe deals in a bargain basement; Utz Potato Chip Factory’s self-guided tours; and Timeline Arcade’s traditional and classic video and pinball games.

Don’t leave town without stopping at one of the many craft breweries (or, hop around to a few) – Aldus Brewing Company, Sign of The Horse Brewery, Something Wicked Brewing Company and Leo Brewing Company. Check out the many restaurants at The Markets at Hanover or take a seat at Warehouse Gourmet Bistro & Brewpub for beer, crab grilled cheese and chocolate chip espresso brownies. 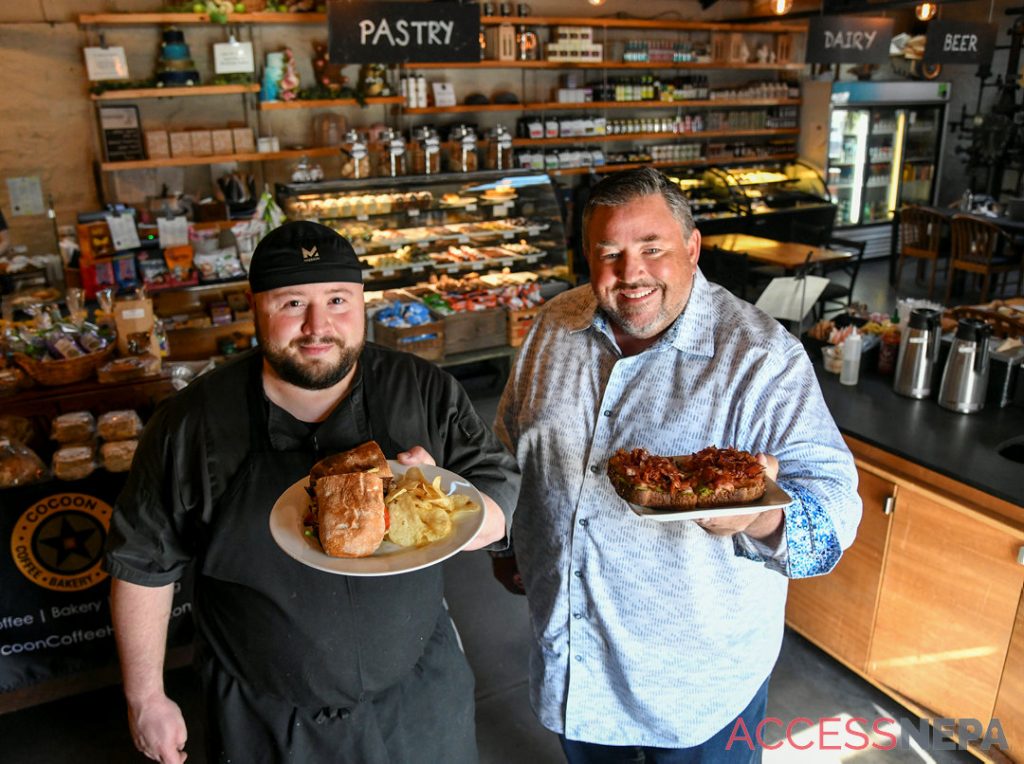 Hawley, located on the Lackawanna River in Wayne County near Lake Wallenpaupack, is a two-hour drive from New York City and three hours from Philadelphia. So it’s a convenient weekend getaway.

Kayaking on the lake, horseback riding, antiquing, biking, hiking and shopping are just a few of the dozens of activities. Families can stop by Costa’s Family Fun Park for miniature golf, batting cages, go-karts, bumper cars and games, while adults can relax at The Lodge at Woodloch with a full spa.

Another notable stop, the Hawley Silk Mill, is the first full scale silk factory in northern Pennsylvania, which was refurbished in 2011 into a lifestyle center with art galleries, dining, entertainment, a fitness center and Lackawanna College.

As for dining, check out The Settlers Inn, dating back to the 1920s with a local and organic menu, or the Glass Wine. Bar. Kitchen at Legends Hotel with beautiful outdoor views of the Paupack High Falls. For more family-oriented dining, slip into The Boathouse Restaurant for crab cakes, New York strip and sandwiches, wraps and salads.

Called the “Switzerland of America” on account of the stunning scenery, Jim Thorpe has no shortage of things to do from shopping, walking down historic Race Street and touring mansions and a Gothic church. Take a train ride, go whitewater rafting on the Lehigh River, hike the Glen Onoko Falls in Lehigh Gorge State Park, bike or hike the Switchback and D&L trails and go camping and canoeing at Mauch Chunk Lake.

Of course, you’ll want to stop for a bite to eat. Try Bonnie & Clyde Pub and Grill in nearby Lehighton with its 1930s intimate atmosphere, burgers and 36 beers on draft, or the Stone Row Pub & Eatery with a locally sourced menu served in a quaint 1800s building. Moya comes highly rated for its small plates of local, international and American foods, or duck into The Douglas House Marketplace for homemade ice cream, baked goods and coffee from Curiosities Coffee and Ice House.

This town, nicknamed The Mushroom Capital of the World, sits in the Brandywine Valley in Chester County and is home to Longwood Gardens, featuring 1,077 acres of manicured gardens, woodlands, meadows, fountains and exhibits.

Take a walk along State Street, an energetic thoroughfare, with an array of locally owned businesses, shops and restaurants.

Among the top draws is Talula’s Table with farm-to-table sandwiches and salads, pastries, local cheeses and prepared foods. Don’t leave town without patronizing La Michoacana, a gourmet ice cream parlor with unconventional flavors such as corn, avocado, tamarind, rice pudding, guava and passion fruit with an optional sprinkling of cinnamon or chili powder.

Of course, you can’t leave without eating mushrooms. Try Portabello’s of Kennett Square for specialties such as roasted mushroom soup, porcini ravioli and mushroom truffle pizza.

The eastern Pennsylvania town in Bucks County sits next to the Delaware River and has been described as charming and quaint. The walkable town on Main Street features plenty to do with artsy and vintage shops, restaurants and bars, clothing boutiques, art galleries and flea markets. A canal runs through the heart of downtown with four of the original locks.

Take a ride on the New Hope Railroad’s 1920s era passenger car, walk by the Bucks County Playhouse and tour Parry Mansion, built in 1784 by one of New Hope’s founders.

Kick off your visit with a jolt at Skyroast Coffee, a small batch coffee roaster, and for lunch duck into Ferry Market for eclectic foods from vendors like New Hope Pizza, Salty Pineapple and The Vegan Butcher. Nektar, a wine, beer, and whiskey bar with Mediterranean-inspired small plates, is worth the stop, or The Landing Restaurant for brunch or dinner and riverside views. 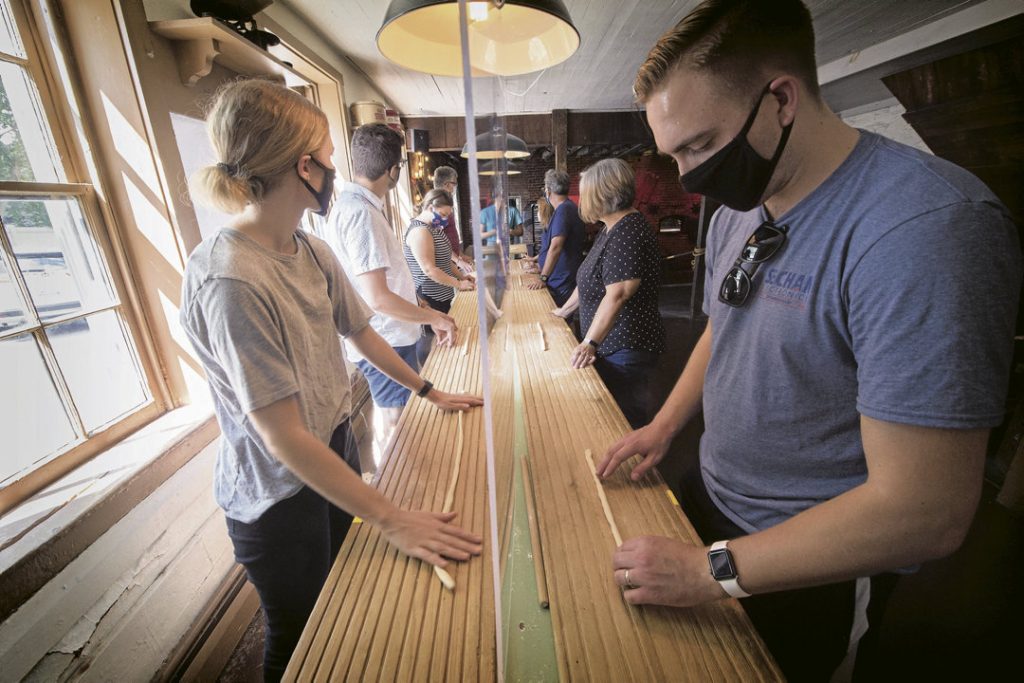 This lively neighborhood located northeast of Pittsburgh’s downtown district has grown from an industrial town to one of the Mid-Atlantic’s top hipster destinations.

Stroll along the Butler Street district and its many shops, tour the Roberto Clemente Museum or bowl at Arsenal Bowling Lanes, described by The New York Times as “where old school bowling vibe meets nightclub atmosphere.”

With so many places to eat, you won’t know where to start.

Start at French bakery La Gourmandine Bakery and Pastry Shop for to-go pastries, then check out Piccolo Forno for pizzas, New Amsterdam for apps and craft beer or Stinky’s Bar & Grill, home to the “Codfather” fish sandwich. For old school fun, hit up Kickback Pinball Cafe for pinball and a cafe menu of espresso drinks, sandwiches, milkshakes and floats.

Browse the many shops including Zest! for culinary supplies, Clementines and Tiger’s Eye for women’s clothing, Aaron’s Books and Atlas General Store.

The town has no shortage of beer stops including Tied House by St. Boniface Craft Brewing Company, Collusion Tap Works and Appalachian Brewing Co. Bulls Head Public House, a refined English pub near the square, is a renowned pitstop for craft beer enthusiasts.

Otherwise, for quick eats head to Tomato Pie Cafe for coffee, sandwiches or the famous tomato pie, Chilangos Authentic Mexican Restaurant for south of the border or inside the Market at The Wilbur on North Broad Street’s food stands such as Rooster Street Butcher for sandwiches and Zig’s Bakery & Cafe for sweet treats. 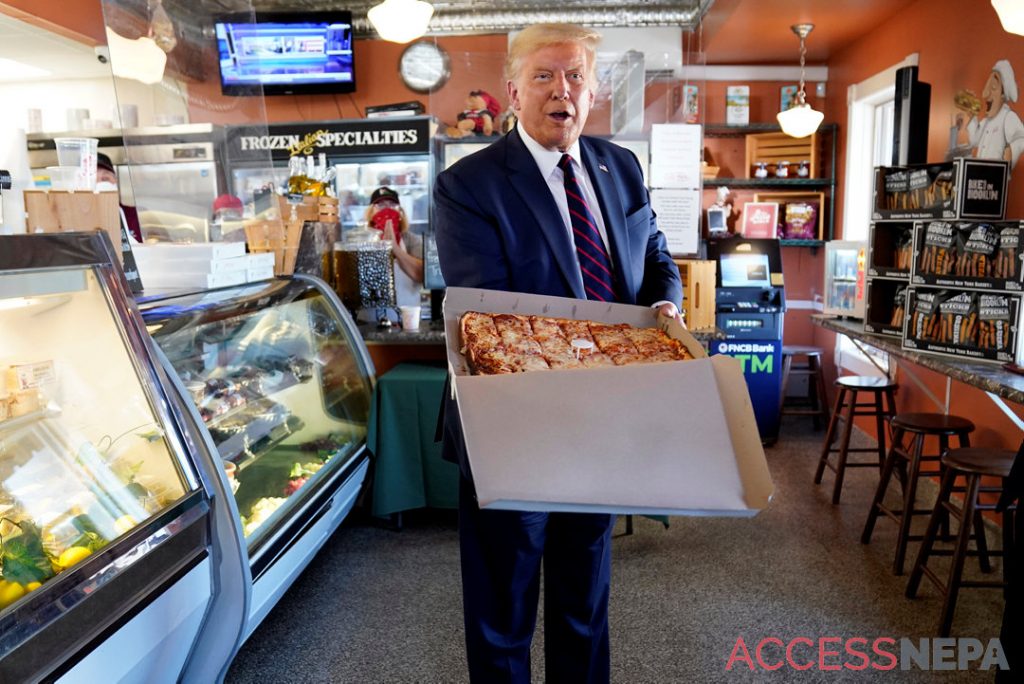 EVAN VUCCI / ASSOCIATED PRESS
President Donald Trump holds a pizza during a visit to Arcaro and Genell restaurant after speaking at a campaign event in Old Forge in August 2020.

You can’t write a top foodie list in Pennsylvania without a mention of Old Forge. The town is built on its pizza heritage and brags to be “the pizza capital of the world.”

The former mining town in Lackawanna County is a few miles from Scranton and attractions such as Steamtown National Historic Site, Houdini Museum and Electric City Trolley Museum. Of course, fans of “The Office” can take DIY tours to locations from the television show such as Poor Richards Pub and Cooper’s Seafood.

In Old Forge, more than a dozen cafes sell the unique square trays of pizza made with a lighter than usual crust that is crispy on the bottom with a chewy center. The pizzas sell in two formats: red or white.

One of the most well-known stops is Arcaro & Genell’s, a fixture since 1962, and Anthony’s Restaurant but there are plenty to explore such as Mary Lou’s Pizza, Cafe Rinaldi and Revello’s.