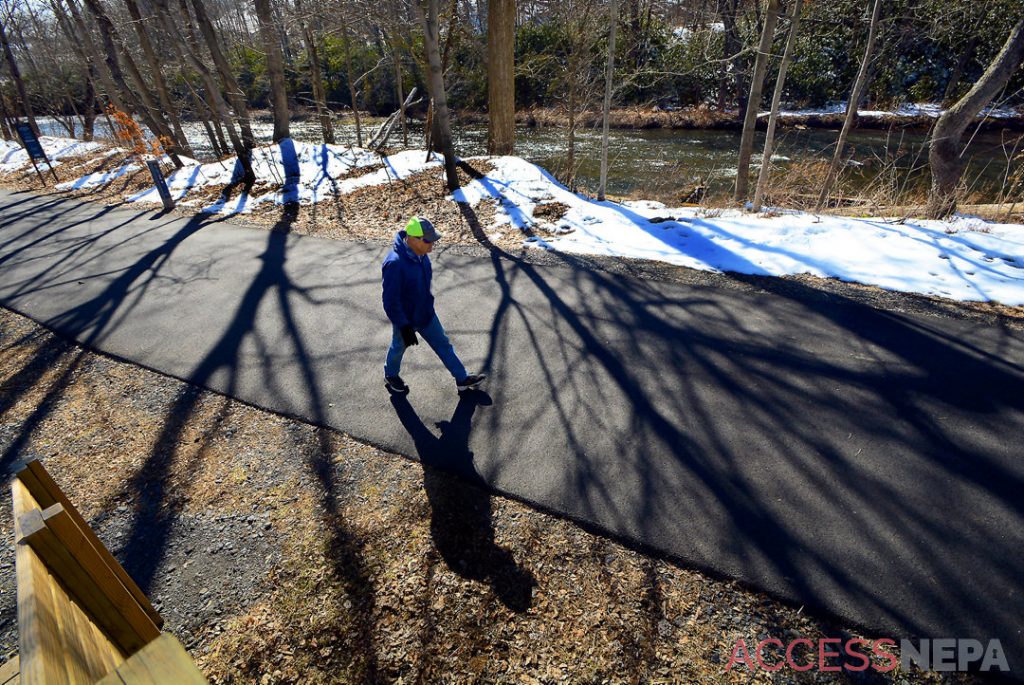 After an unplanned break for COVID-19 restrictions, work has resumed on a new section of trail in Dickson City.

Lackawanna Heritage Valley officials have been working for years to develop a one-mile section of the popular walking trail that follows the Lackawanna River and connects more than 30 communities through Luzerne, Lackawanna, Susquehanna and Wayne County. As part of a land deal in 2015, the group acquired a bridge was originally built in 1910 to service the Eddy Creek Colliery in Olyphant. The bridge, which is no longer in service, was originally meant to be a pedestrian bridge connecting Dickson City and Olyphant.

When the bridge collapsed into the Lackawanna River during the heavy rains last May, the nonprofit began working with the Bureau of Abandoned Mine Reclamation to come up with a set of plans to get the structure out of the river and safely stabilize the river banks, said Owen Worozbyt, the LHV’s trail and environmental projects manager. Work began on the site in December 2019.

“The structure was removed in January and the banks were finally stabilized” by early May, Worozbyt said. “The total cost of the project was about $130,000, and LHV was able to secure Bureau of Abandoned Mine Land Reclamation funding for the project, since the structure directly related to mining.”

LHVA started work with Rutledge Excavating on the Dickson City Trail Project in March. Work stopped for several weeks but recently resumed. The trail section runs from Railroad Street, near the Miners Bar to Rite Aid on the corner of Lackawanna and Main Avenue. The overall cost of the project is roughly $1 million dollars, Worozbyt said. The project was originally scheduled to be completed in December but the delays have pushed that date back, he added.

In addition, LHV recently applied for two grants to develop new sections in the Midvalley recently, one in Dickson City, the other in Mayfield. Trail usage has seen a significant increase over the past two months, as stay-at-home orders drove more people outside to exercise. A counter installed at the Depot Street trailhead near Mid Valley Plumbing recorded 14,000 hits in April, according to Worozbyt.

LHV has just over nine miles of trail through the Midvalley, with trailheads at Bernard Seminski Memorial Park in Dickson City, Condella Park in Olyphant, the north and south ends of Blakely Borough Recreational Complex, Depot Street and Bridge Street in Peckville, Winton Road and River Street in Jessup, Laurel Street and Gilmartin Street in Archbald and Delaware Street in Jermyn.

With more people enjoyed the trails, Worozbyt said LHV is always looking for volunteers to help maintain the trail and cut back Japanese knotweed, an invasive plant. Donations can be made online at LHVA.org.