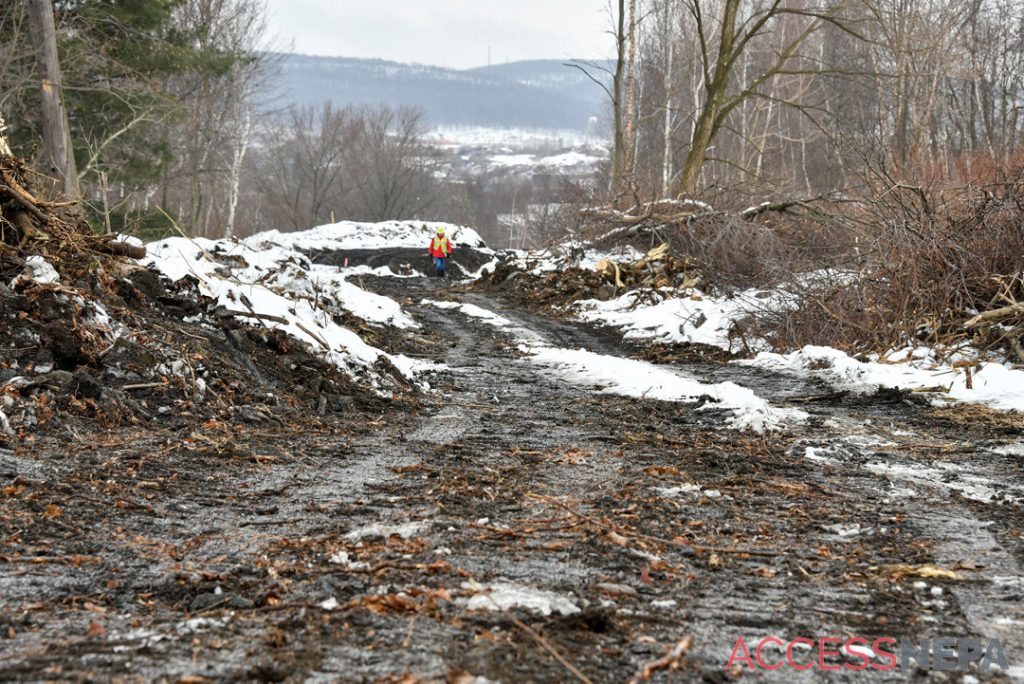 Work has begun on a new 1-mile section of the Lackawanna River Heritage Trail through the former Marvine colliery site in Scranton.

The new trail will mostly run atop the riverbank between the East Parker Street bridge and landing and Boulevard Avenue near Interstate 81 at the city’s northern border with Throop.

Aaron McNany, owner of Veloce Bikeworks in Scranton, is glad to see the project moving forward and is hopeful more work will continue on the trail.

“Having a contiguous bike trail is one of the biggest things that is going to benefit the alternative transportation infrastructure in Scranton,” he said. “I think the longest stretch is maybe 7 miles without having to use a road. The more efforts they have to create these connecting sections, the more practical the trail will become.”

At its northernmost point, the new trail section would turn from the river and run parallel along Interstate 81 for a short stretch, behind and along the Lackawanna County Recycling Center, before reaching Boulevard Avenue. Work began about a week ago.

“Unlike a more traditional rail trail where it’s following a rail bed, this one is an entirely new corridor. We have to clear it all out,” said Owen Worozbyt, the trail and environmental projects manager for the Lackawanna Heritage Valley Authority.

The existing river trail has a gap between East Parker Street and Dickson City, such that users take to the roads to make the connection.

McNany feels the new section will offer improved safety and convenience for bicyclists.

“That’s a prime area we use for our Monday night hybrid rides from the spring to the fall,” he said. “We usually get 30 or more riders every week and always have to bypass certain sections and use the street. We’re definitely looking forward to it.”

The nonprofit Lackawanna Heritage Valley organization is developing the Marvine section of the trail not only for recreation and transportation, but also to interpret the historic and cultural life of the region.

The Marvine site was a mining area for a century, looming large on the landscape with breakers, culm banks and rails. Now largely vacant, the Marvine site is a remnant of its bustling past, but still has pieces of railroad and coal mining history visible near active rail lines.

The Marvine connector will pass by two old bridges that still stand over the river but no longer connect to anything, remaining only as rusted reminders of the past.

“It’s been turned over and twisted up and down in as many ways as you can get it,” Worozbyt said of the colliery tract and its long history of coal mining.

The Marvine trail section will be asphalt paved, 12 feet wide and have grass shoulders. Paving creates a more durable trail to accommodate both bicyclists and emergency vehicles, if necessary.

Work creating the Marvine trail section, including new plantings and fencing, should be completed around November, he said.

“In the long run, I think it will be a much-appreciated section of trail,” Worozbyt said.