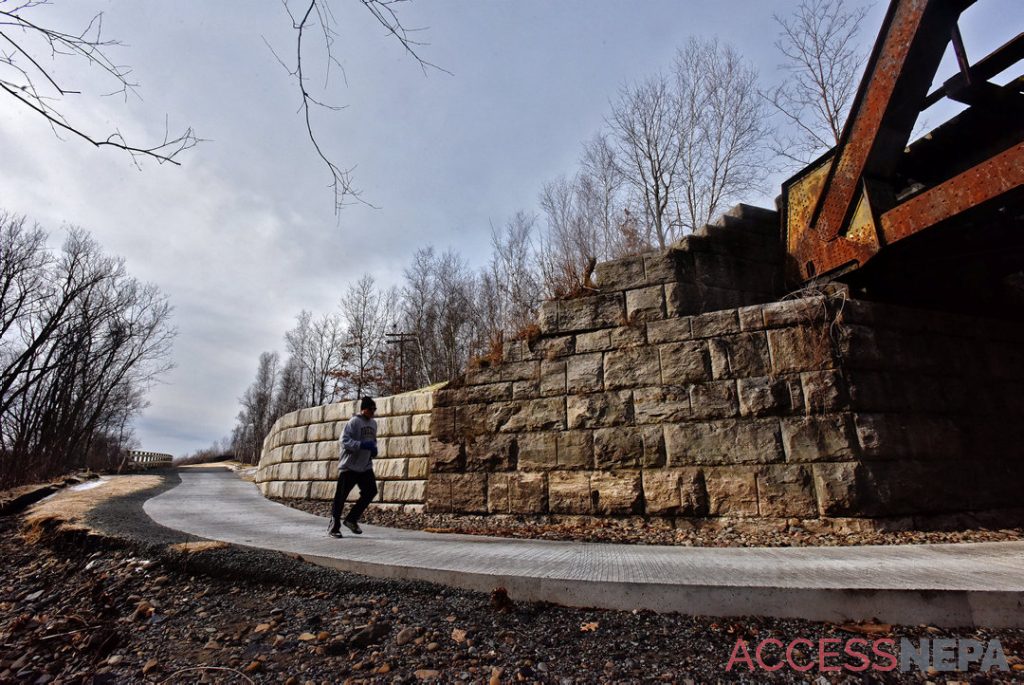 Construction is largely done on the new section of trail, which begins at Railroad Street and ends at Hull Creek, said Owen Worozbyt, the Lackawanna Heritage Valley’s trail and environmental projects manager. Worozbyt expects work to wrap up at the end of the month, with the trail officially opening in late winter.

All that’s left is to install wooden fencing along the trail, he said. Getting the pressure-treated lumber led to some delays, as did the onset of the pandemic, Worozbyt said. They planned to begin work on the trail in March, but COVID-19 shutdowns forced them to delay the project for two months, he said.

This spring, they plan to improve the aesthetic of the trail, planting trees and adding picnic tables and benches, Worozbyt said.

The entire project amounted to just over $1 million, he said, explaining they now have enough funds left over to install a pedestrian bridge over Hull Creek.

The bridge, which will cost about $30,000, will allow trail users to cross Hull Creek onto West Lackawanna Avenue. The project will be completed sometime between late summer and the end of 2021, depending on what permits the bridge requires, Worozbyt said.

“With this stretch opening up, it’s just going to bring more people through,” he said.

The LHV plans to further expand in Dickson City with a four-tenths of a mile strip of trail from Eagle Lane to Railroad Street, Worozbyt said. The LHV purchased the land in March 2019 from the Pennsylvania Northeast Regional Railroad Authority for $90,000, according to a property transaction recorded March 11, 2019.

They made the purchase with a combination of funding from the state Department of Conservation and Natural Resources, Dickson City and the LHV, Worozbyt said.

The LHV also received $200,000 from the DCNR to cover the design and engineering of the trail, and they plan to seek additional funding through the state Department of Transportation, he said.

The new sections of trail tie into ongoing projects in Dickson City. 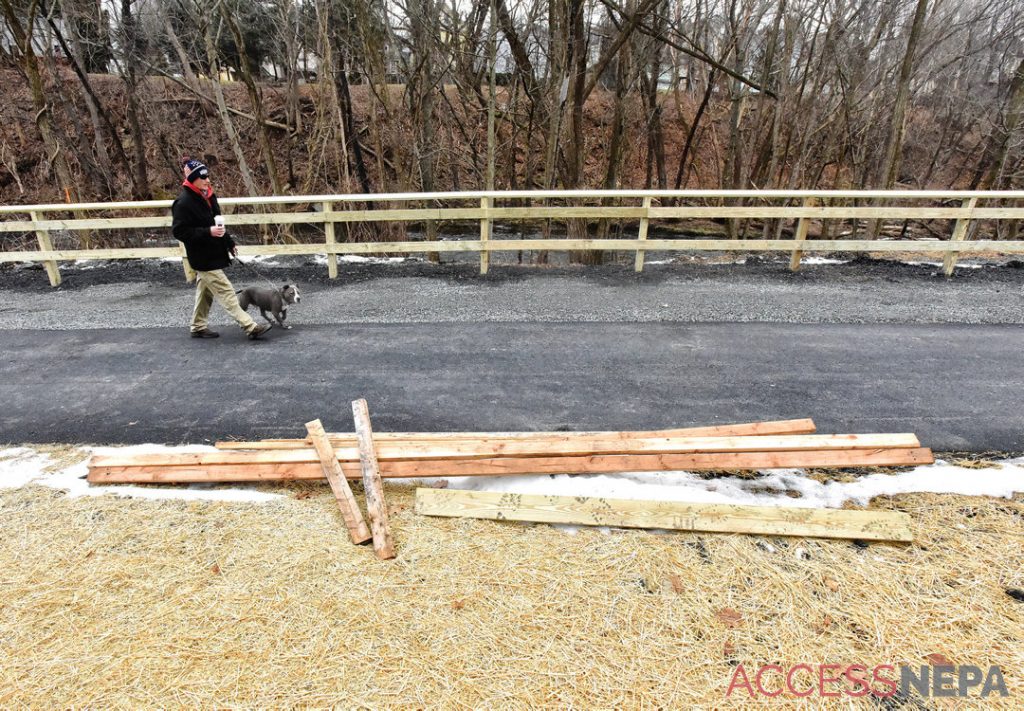 SEAN MCKEAG / STAFF PHOTOGRAPHER
A man walks his dog past a pile of wood that will be used to finish constructing the fence that runs between the trail and the Lackawanna River on the new one-mile section of the Lackawanna River Heritage Trail in Dickson City Friday, January 1, 2021.

That section of levee trail will take pedestrians near the borough’s Polonia Park, which will eventually have a pedestrian bridge connecting it to the upcoming Riverfront Park, Forconi said.

The planned park on the 800 block of Enterprise Street will include separate dog parks for large and small dogs, a picnic area with pavilions, places to fish along the Lackawanna River, a small playground and a walking trail. The borough plans to begin work on the park this year.

People will then be able to use the Eagle Lane bike lane to get from the park to the new sections of heritage trail, Forconi said.

“It’s all coming together,” he said.