Hiking the Long Trail in Vermont 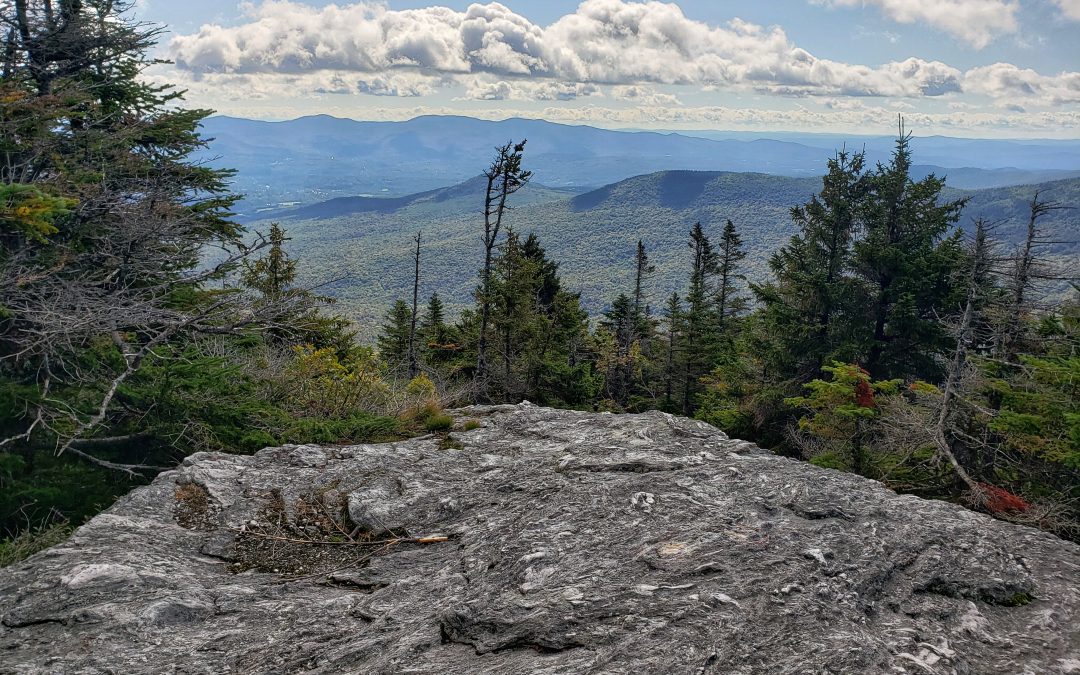 Let’s just start here. The northern section of Long Trail in Vermont is hard … far more difficult than I had imagined. For those unfamiliar with backpacking in that area, the Long Trail is America’s oldest footpath; it’s the inspiration for the Appalachian Trail, and it runs from the southern border of the state and stretches to Canada, roughly 280 miles.

I’ve hiked sections of it over the past few years but only the southern end that shares about 100 miles with the AT. It’s rugged but manageable. The northern section is different. I read about the area we hiked around Mount Mansfield – the highest peak in Vermont – before we headed there this past weekend but wasn’t prepared for just how different the terrain would be. 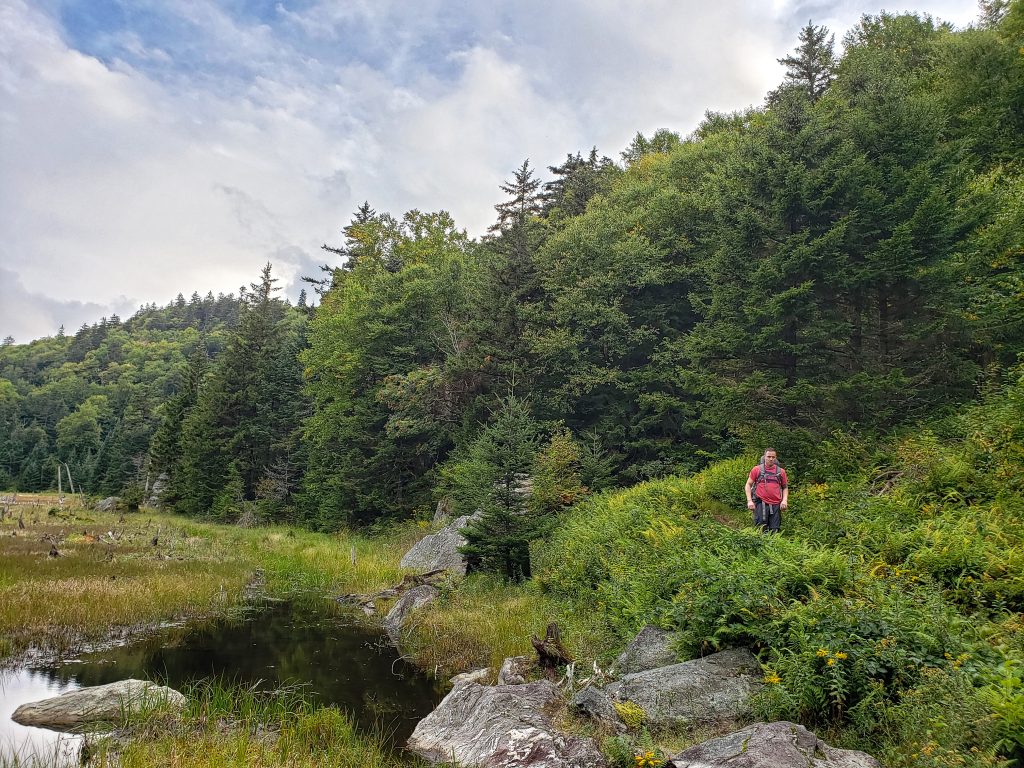 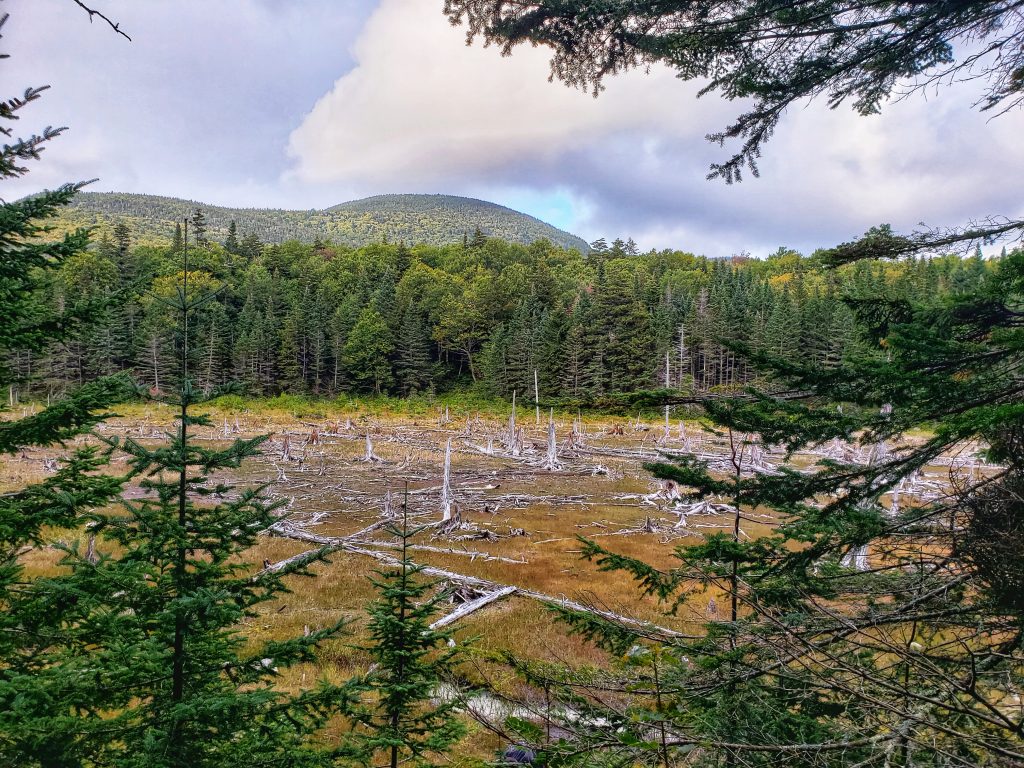 It’s a stunning section of trail for sure. Our route was about 20 miles on the trail, culminating with a trip over the top of Mansfield and then down through Stowe ski resort. That wasn’t, however, our original plan, which was a longer route that had to be shortened when we realized just how punishing the terrain was going to be. I’ll get into the need for having a “bailout plan” in another post.

I find it a little hard to describe the Long Trail. It’s all about elevation gain and loss. You’re either going up or down, often severely. Flat sections seem impossibly rare. You might be able to fly up a hill, but downhill is just going to slow you down as you pick your way over slippery rocks and a tangle of roots ready to faceplant you into some granite. You have to take it easy. I remember thinking on one section with a long, technical downhill that the trail was just relentless in its physical and mental demands. 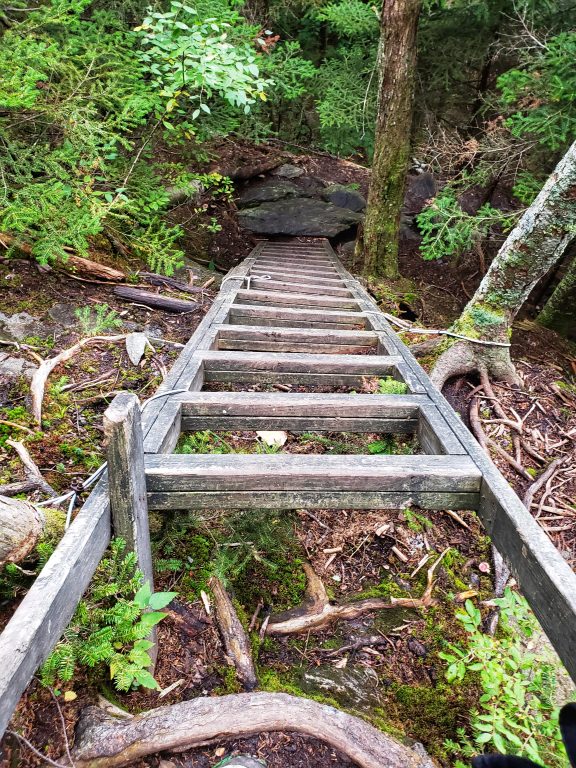 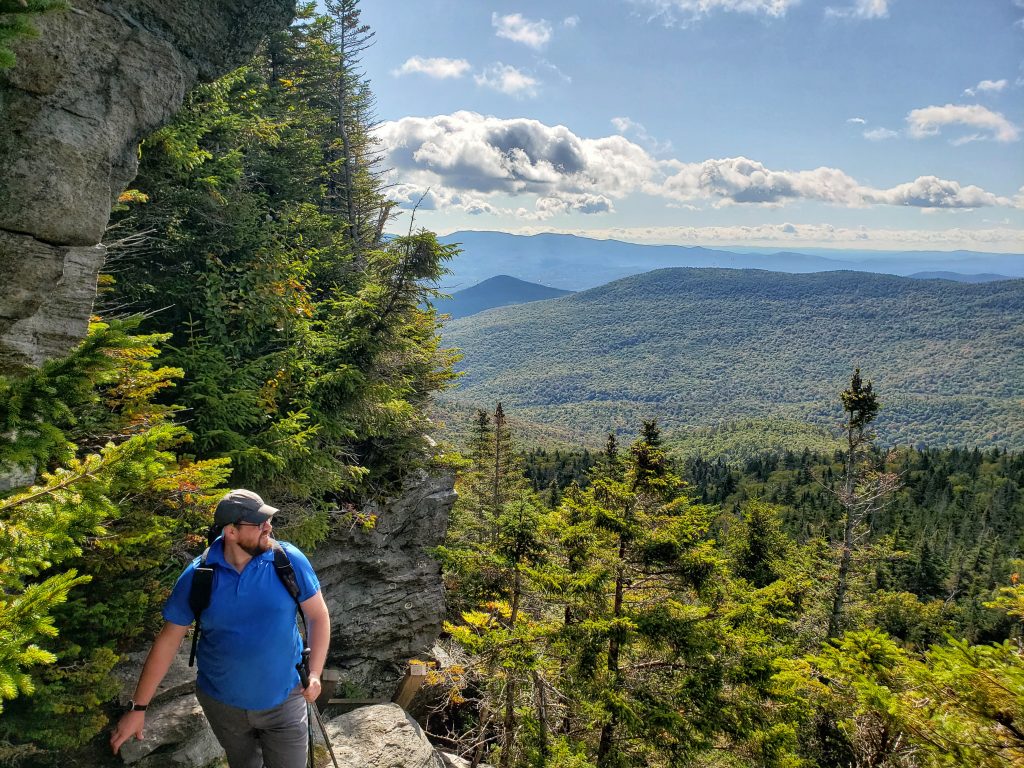 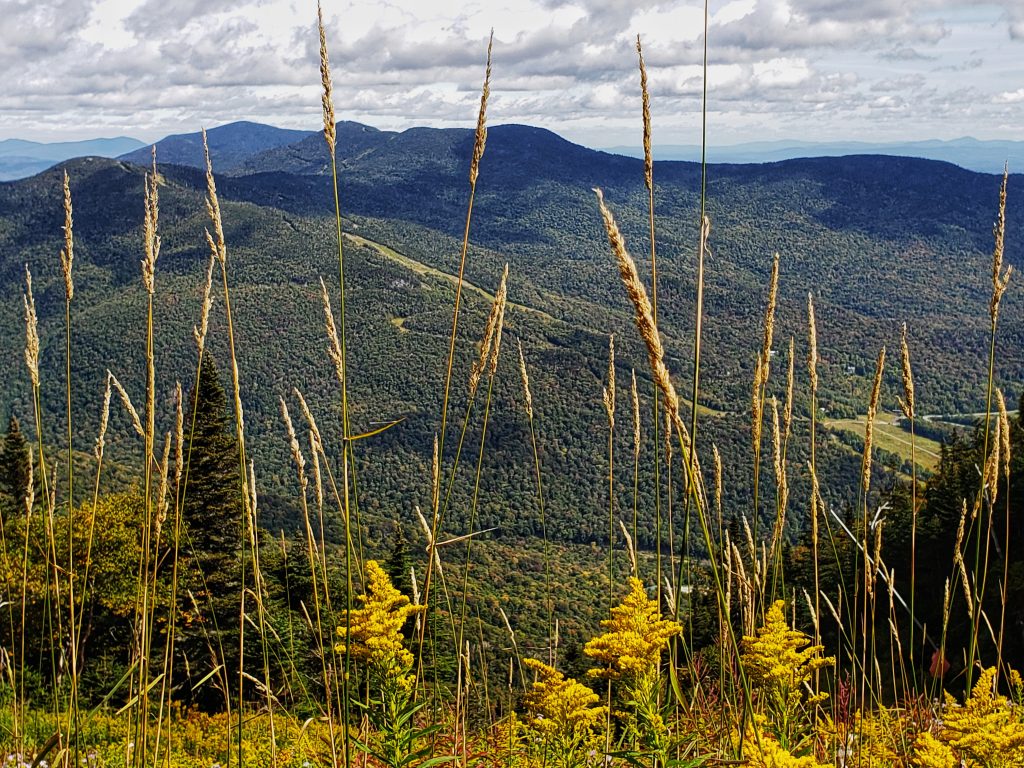 It was unnerving to see just how slowly miles passed on the trail. I remember thinking a few times, “I should be near this shelter or this peak,” only to find out I had covered half the mileage I expected. Part of the trip was over Mount Bolton, a significant peak but not the highest point of the trip, and after climbing for a couple hours, we came to a clearing and I was certain it was the summit. After a quick downhill section, we started climbing again for another hour before actually reaching the summit. Welcome to the Long Trail and the false summits that can mess with your mind.

But it’s also beautiful. While you hike mostly covered in a canopy of trees the landscape morphs into lush sections with greens that are difficult to imagine. The forest breathes as winds peak in intensity and then shallow into deep sighs. At one point we saw a tree, half ripped from the ground by howling winds. The moss-carpeted ground, still clinging to the roots, heaved with each passing breeze. I don’t think I’ll ever forget watching that. The hike is loaded with those moments. At times it lacks the views many hikers, including myself, chase. But it’s funny how nature can do that, show you a detail or a scene that forces you into the moment.

The final section of the hike is the payoff for the work you’ve already done with a push to the top of Mansfield. You’re at 4,000 feet and it’s a section of trail called “The Forehead.” It’s really not all that physically demanding in comparison, but it’s mentally a grind. Ladders are screwed into boulders in some sections and there are rock scrambles that leave only a fraction of room for error. Having to rely on a rock handhold to hoist yourself onto the next section of trail is not something with which I encounter every day. Doing it on tired legs with no other option can play with your head. It played with mine. I think in the next blog I’m going to write about the mental game of backpacking and pushing outside where you’re comfortable and when you shouldn’t do it. 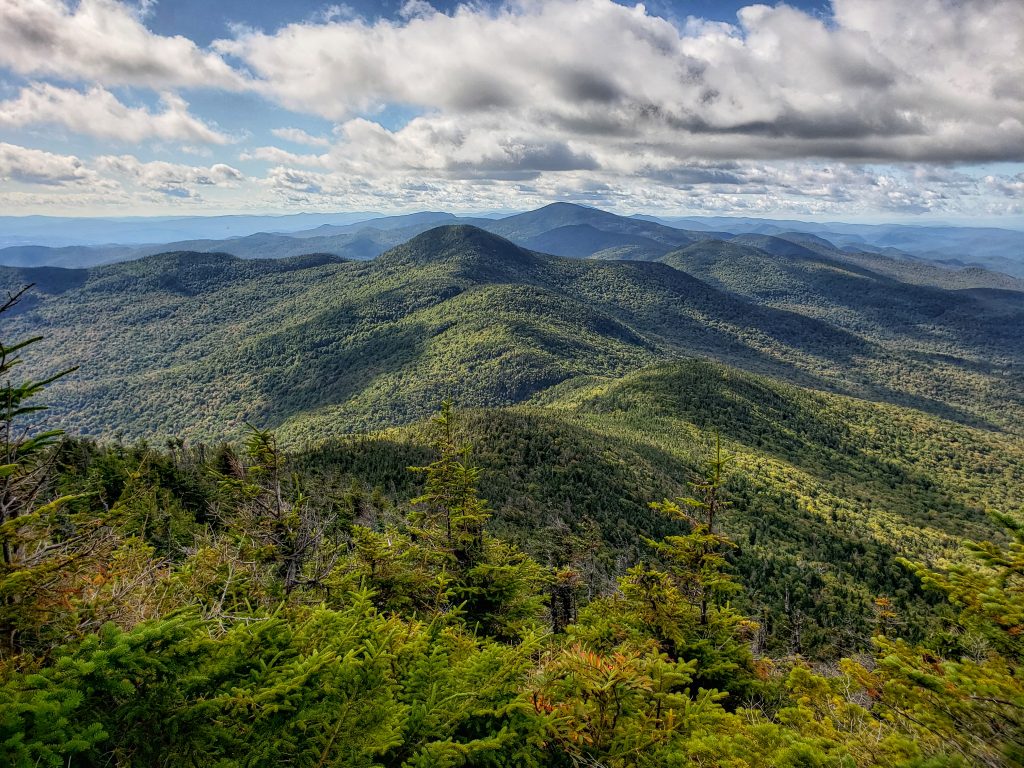 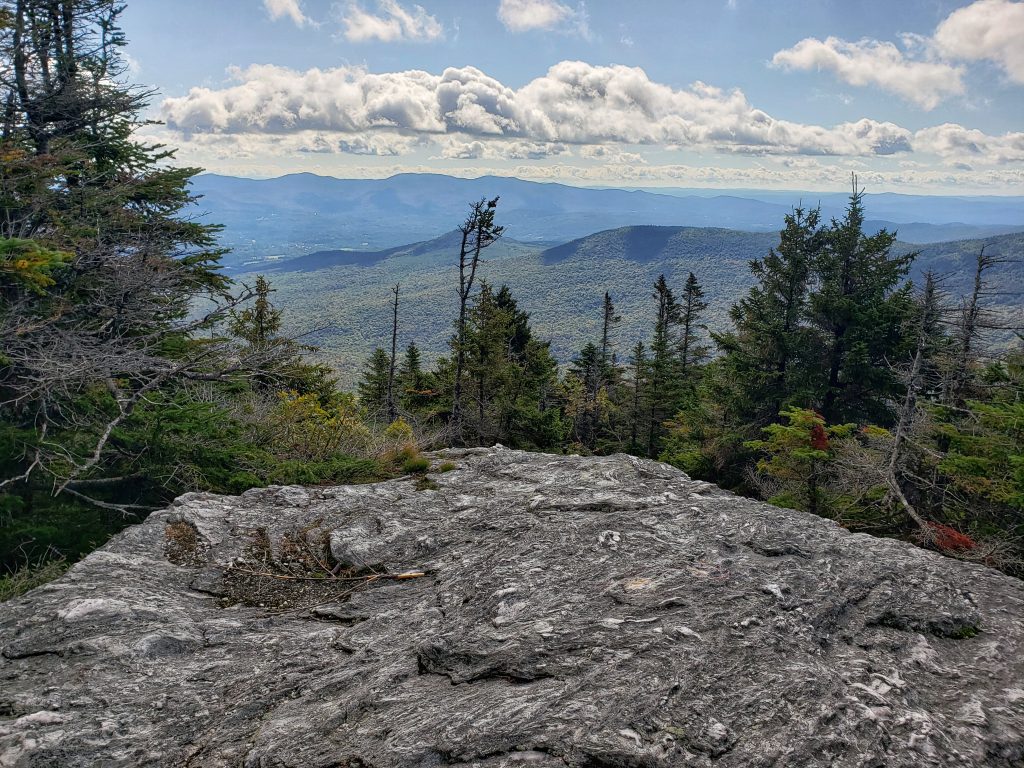 It’s no surprise that the top of Mansfield is magical. There are views of New York and the White Mountains of New Hampshire. It’s also crowded, something I’m still having trouble getting used to in chasing these peaks. It was the same deal atop Mount Washington when we were there a couple years ago. Because it’s the state’s tallest peak, it’s a destination and a road will let you drive your car to the top or take you to a trailhead that allows for an easier walk to the top. Don’t get me wrong, everyone should have access to these amazing vistas. It’s weird only in that we were isolated from the rest of the world for a day and a half and then all of a sudden you are in a crowd of people.

After kicking around the top for awhile, we took a quick walk down part of the access road to a spring because we were REALLY short on water and found a trail connected to Stowe and finished the trip at the bottom of the ski resort.

I’ll check in with you guys in a couple days with some other details from the trip.

Until then … peace and be kind.