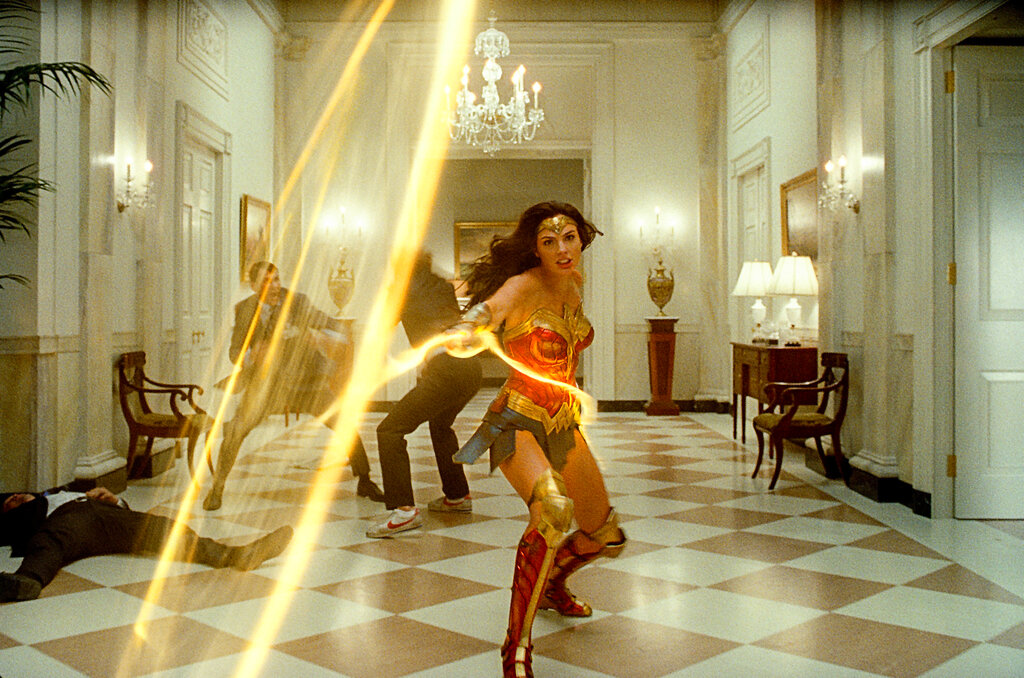 In 2017, “Wonder Woman” set the bar for female-centric superhero movies. The first film focusing on DC Comics’ legendary Amazon warrior struck a chord with women. The comic book masterpiece established an iconic and empowered heroine in Diana Prince, perfectly portrayed by Gal Gadot. The inspiring film was one of my favorite movies of the year.

Three years later, the world is a much different place as the anticipated sequel “Wonder Woman 1984” finally hits the screen – and in our living rooms, no less. During an unusual year mostly devoid of comic book films, does “Wonder Woman 1984” deliver the superhero flick we need? The answer is a complicated one, even for Diana’s trusty Lasso of Truth.

The sequel catches up with Diana Prince/Wonder Woman (Gadot) as she secretly fights crime in the 1980s. The immortal’s quiet existence changes when a mysterious artifact, the Dreamstone, turns up. The stone grants wishes, but at a cost. The Dreamstone attracts the interest of meek gemologist Barbara Minerva (Kristen Wiig) and ambitious businessman Max Lord (Pedro Pascal). But the more the stone is used, the more it threatens the fate of civilization. As chaos spreads across the globe, Diana reunites with her long-lost love Steve Trevor (Chris Pine) to save the world.

Set to debut in June, “Wonder Woman 1984” was pushed back several times due to the coronavirus pandemic. In a bold move for the film industry, Warner Bros. decided to release the blockbuster simultaneously on streaming service HBO Max and in theaters on Christmas. This ended up being a boon for those of us who live in Northeast Pennsylvania. The only way we can see “Wonder Woman 1984” is on our TVs because the state’s movie theaters are closed amid a surge in virus cases.

Uplifting and hopeful, “Wonder Woman 1984” features a great lead performance from Gadot, an enjoyable cast and an emotional ending that improves upon the original. The sequel tells a character-driven story within the vehicle of a big-budget spectacle. Returning as director, Patti Jenkins co-wrote the film’s screenplay, which explores the virtues and flaws of its heroes and villains. The film excels at developing its characters, including its beloved superhero.

Gadot steps back into the familiar armor with ease, the fourth time she’s played the role in the DC Extended Universe. In “Wonder Woman 1984,” the charismatic actress shows how the naïve fish-out-of-water in “Wonder Woman” evolved into the world-weary socialite in 2016’s “Batman v. Superman: Dawn of Justice.” After her participation in World War I, the compassionate Diana remains a force for good and a beacon of hope. But she has grown worldly and distrustful. As perfectly as Gadot inhabits Diana, she never becomes too perfect. Even as a goddess, Diana is prone to humanity’s fallible nature, making her relatable to viewers.

A lot of “Wonder Woman 1984” coasts along on Gadot and Pine’s fantastic chemistry. The two are a joy to watch as Diana teaches Steve about 1984’s trends and clothing. It’s a clever reversal of when Steve introduces the sheltered Diana to the outside world in “Wonder Woman.” Pine shows off his comedic abilities as the two go back and forth, earning laughs.

Wiig and Pascal stretch their acting muscles as the film’s villains. As the shy Barbara, Wiig steadily gains confidence as she transforms from Diana’s admiring friend to begrudging foe, Cheetah. The actress makes the character sympathetic. The comedian shows a flair for action, able to hold her own against Gadot. After an incredible turn on “The Mandalorian,” Pascal’s momentum continues with his impassioned performance as Lord. While chewing the scenery, the actor taps into Lord’s desperation as a father trying to provide for his son. This makes the slick con man likable despite his despicable actions.

The climactic battle in the first “Wonder Woman” devolved into a CGI-heavy mess, an underwhelming finish to an otherwise masterful film. But “Wonder Woman 1984” learns from the original’s mistake by bringing its characters’ humanity into focus in the finale. This raises the emotional stakes of the resolution, increasing the audience’s investment. The sequel ends on an uplifting and hopeful note, which is sure to resonate with viewers amid the pandemic.

As much good as there is in “Wonder Woman 1984,” the flawed and overlong sequel fails to reach the magnificent heights of its ground-breaking predecessor. The follow-up is brought down by sparse action, a scattered story and a convoluted plot.

At two and a half hours long, “Wonder Woman 1984” features a total of five action set pieces spread out over its runtime, which could leave action junkies wanting more. The film feels its length without consistent fights and battles to break it up, contributing to the sequel’s poor pacing. The film fails to put together a set piece that’s as memorable as the magnificent “No Man’s Land” sequence in the original. That’s not to say the sequel doesn’t have good action. The opening set piece at an Olympics-style competition at Themyscira is breathtaking, and a robbery at a shopping mall is thrilling. But the fights don’t come close to generating the same kind of awe as the set pieces in the first film. Even Hans Zimmer’s score sounds uninspired.

The sequel’s CGI is also questionable. When Barbara completes her transformation into an animalized Cheetah, the effects look better in the film than they did in the trailers. But that doesn’t mean they’re … well, good. The standoff between Diana and her frenemy is filmed in darkness, a giveaway the CGI isn’t all it’s cracked up to be.

The storytelling meanders, with the plot jumping between three different journeys: Diana and Steve, Barbara and Lord. The characters bounce around the globe at a head-spinning rate. The film could lop off a half hour, which would tighten the hodgepodge story.

The mythology surrounding the Dreamstone is also confusing. At first, using the stone starts out relatively simple: you make a wish, and it comes true. But then the stone’s abilities are expanded upon as characters start adding their own rules, seemingly out of nowhere. This makes the story hard to follow.

Following a wait that was extended by half a year, “Wonder Woman 1984” is a good film, but it’s not a great one. Gadot is wonderful, the character development is excellent, and the finale is uplifting at a time when we need it. But the lack of memorable action, its bloated story and muddled plot prevent it from soaring as high as its influential predecessor. By not striving for the original’s greatness, “Wonder Woman 1984” is just OK when it should have been better. 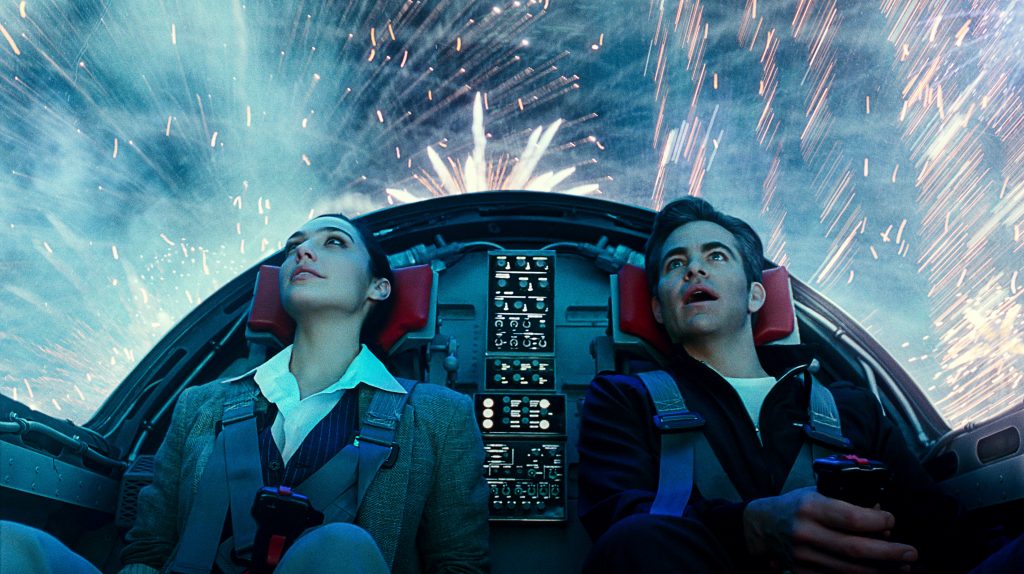 Armed robbers enter a jewelry store at the mall and take black-market items from the back room. They walk out of the store with bags and look like they’ll get away with the crime. That is until one of the robbers clumsily drops his gun on the mall floor where a civilian sees it and screams. Cops try to corner the suspects as one of the men grabs a child and threatens to drop her three stories. Luckily, our hero swings in and saves the day in a rather cartoonish fashion.

Later, our hero runs into a loner and “weirdo” who nobody likes or even pays attention to because she wears thick glasses. This loner gains superhuman abilities, but is unable to contain her rage. She seeks vengeance and more power, while protecting her new notoriety. On top of that villain, there’s another villain who also gains power off a relic from the past. They obviously team up, because that’s what usually happens in a Spider-Man movie…

Which Spider-Man movie is this?

“Wonder Woman 1984” tried to do something different from its highly-influential predecessor, but lost the magic that made the first one great. I enjoyed the vibrant colors of the film and loud fashion against the dreary trenches of World War I in the first film. That might be the only thing I like better about the sequel.

The first installment proved a ground-breaking film, but it wasn’t without its flaws. The emotional No Man’s Land scene highlights the 2017 film and allowed me to look past the ending. I don’t agree with the ending, and I think it uproots the film to a certain extent. However, the first three quarters of the movie are so well done. That focused my expectations for the sequel. I wasn’t expecting a better film or a scene that matches the No Man’s Land sequence. That’s just too hard to replicate. However, I expected a more complete film. I expected a better ending.

Unfortunately, “Wonder Woman 1984” never hooked me. When the ending happened, I couldn’t judge it because I never connected with all that came before it.

I don’t know that Wonder Woman would be hung up on a guy for about 65 years, and still seeing things that remind her of him in 1984, and never willing to fall in love again. Maybe that’s all feasible. The fact is if it isn’t, it doesn’t matter because I really enjoyed when Wonder Woman/Diana Prince (Gal Gadot) and Steve Trevor (Chris Pine) shared the screen. They carried over the chemistry they built in the first film. Their teamwork is still awesome to see and the emotion of their relationship still holds up. They account for some of the film’s best scenes, including acquainting Trevor with the fashion and technology of 1984, flying a jet through fireworks and a convoy action sequence. As weird as Trevor being in the movie is, I can’t knock it, because I enjoyed it.

Newcomers Kristen Wiig (Barbara Minerva) and Pedro Pascal (Maxwell Lord) do the best with what they have to work with. The Minerva character wasn’t written very strongly, but Wiig makes the character engaging. Pascal matches the odd tone of the film and hams it up at the perfect moments. The script just let down both solid actors.

Most of all, the movie let down Gadot. After many, including myself, questioned the casting choice years ago, she is fantastic in this role. I don’t know that I’m ready to call her a great actress, but what I do know is she’s great in this. Gadot has such a command of the character, that it comes easy to her. That effortlessness speaks to her incredible preparation for the role. This is her fourth movie as Wonder Woman, but she’s nailed this from day one. The emotion, physicality and sincerity she brings to the role truly make her Wonder Woman almost to the extent Robert Downey Jr. captured Tony Stark/Iron Man. I’ll always enjoy watching her portray Wonder Woman, even if the movie isn’t up to par. We should have believed in her from the start.

“Wonder Woman 1984” deviates from what made its predecessor great and actually took from outdated superhero films. The execution was not the problem, as Gadot gave another great performance that was wasted. The problems started with the film’s vision. I don’t understand the thought process, but much like Miles Morales says in “Spider-Man: Into the Spider-Verse” when he doesn’t tie his shoes … “It’s a choice.”