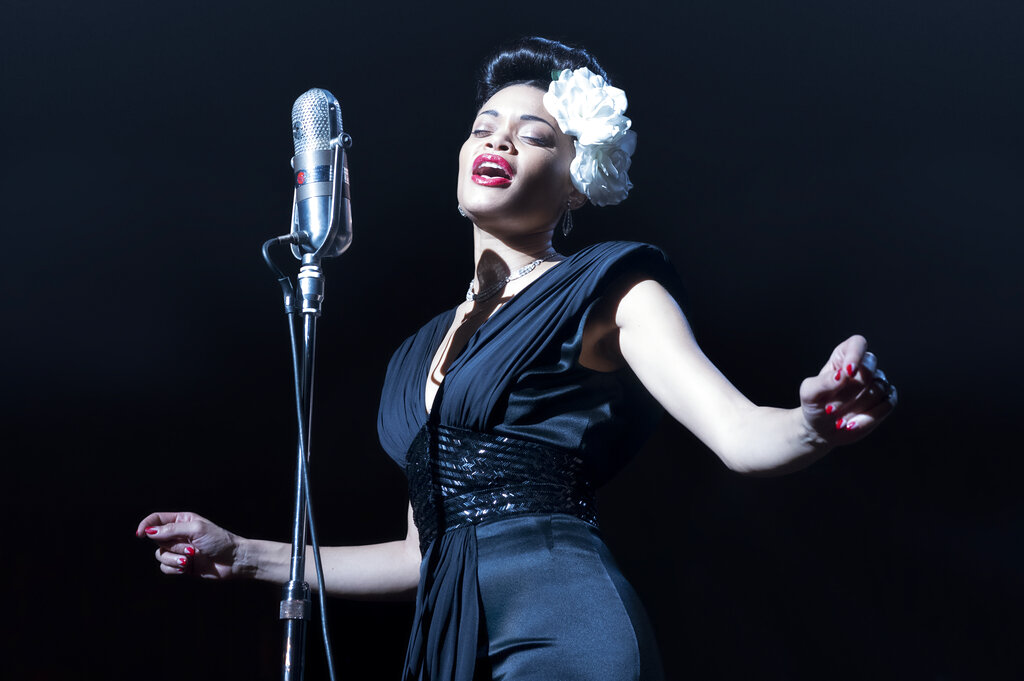 When Andra Day won the Golden Globe for best actress in a motion picture drama, the surprise recognition raised the profile of “The United States vs. Billie Holiday.” The musical biopic, now streaming on Hulu, traces the FBI’s relentless witch hunt of the legendary jazz singer.

Day’s tour-de-force portrayal of “Lady Day” boosts the otherwise frenetic and messy drama. The ambitious film tries to take on too much at once. Director Lee Daniels’ latest film exploits the embattled songstress’s turbulent life, spending more time wallowing in her drug addiction and abusive relationships than on the themes of racial injustice that it introduces.

The limited biopic, which is based on a nonfiction book, follows the federal government’s efforts in the 1940s and 1950s to prevent Holiday from singing her protest ballad, “Strange Fruit.” The song’s haunting lyrics describe the lynching of Blacks in the South. The government doesn’t want Holiday speaking out against racism, so the Federal Bureau of Narcotics – led by its undeterred commissioner, Harry Anslinger (Garrett Hedlund) – goes after the singer for buying illegal drugs. The agency would hound Holiday – who endured jail time, a drug set-up and the watchful eye of federal agent-turned-lover Jimmy Fletcher (Trevante Rhodes) – until her death from cirrhosis at age 44 in 1959.

With its clashing tones and haphazard editing, “The United States vs. Billie Holiday” lacks a cohesive feel. The biopic awkwardly switches from comedy to drama, with little transition. Daniels stylizes some scenes in black and white and speeds them up to replicate the look of the films of the time period. But the method isn’t consistently used, so the artful gimmick feels out of place.

The two most memorable sequences are a pair of long, continuous takes that occur during drug-induced fever dreams. In one, a 10-year-old Holiday shows Fletcher the trauma of being brought up in a bordello. In another, Holiday witnesses a lynching in a field, which leads into Day’s show-stopping performance of “Strange Fruit.” The problem is the rest of the movie feels so choppy.

The drama suffers from a jumbled narrative. The film starts with Holiday being interviewed toward the end of her life, then jumps around different time periods. This becomes confusing as the movie gradually abandons the interview framework. Then the film attempts to focus on the “Strange Fruit” controversy” as the men in Holiday’s life try to convince her to stop performing the song. But then the movie doesn’t focus on the song enough. With the film’s runtime at two hours and 10 minutes, the singer doesn’t perform “Strange Fruit” until an hour and 30 minutes in. That’s a long time to wait for what’s supposed to be the lynchpin of the story.

“The United States vs. Billie Holiday” is the latest film in the extended 2020 movie season to address themes of racial injustice. The drama delves into the government’s surveillance of influential Blacks by the government, which was also tackled in “Judas and the Black Messiah” and “One Night in Miami.” The film also looks at Black performers’ struggle to control the art they create, which “Ma Rainey’s Black Bottom” covered deftly. But the unfocused film doesn’t do as good of a job as these other films in fully exploring these issues. The biopic is more interested in leveraging its leading lady’s woes.

The bulk of “The United States vs. Billie Holiday” is spent on Holiday’s debilitating drug use and toxic romances. The film takes a no-holds-barred approach to depicting her traumas, showcasing graphic drug use and sex. The singer is shown repeatedly injecting heroin, craving a fix and letting in shady suitors. What’s upsetting is “The United States vs. Billie Holiday” focuses more on the songstress’s problems instead of who she was as a person. The movie portrays her as a wretched figure instead of the groundbreaking artist and activist that she was. This is a disservice to its leading lady.

The film’s shining light is its own Lady Day – Andra Day. “The United States vs. Billie Holiday” marks the first major film role for the singer-turned-actress, whose stage name was inspired by Holiday. The powerful Day thrives in the role, bringing the storied singer to life with her iconic gardenia hair pins, glamorous gowns and flowing pants suits. Performing her own singing, she disappears into the songstress’s classics, including “All of Me,” “Them There Eyes” and the mesmerizing “Strange Fruit.”

Day adds a formidable depth and grit to what’s in the script as the vulnerable singer battles desperation and heartbreak. She earns viewers’ sympathy as her ongoing addiction and the unrelenting Feds infiltrate her life. The Golden Globe-winning performance should put her on the Academy Awards’ radar for best actress.

The rest of the cast adds varying contributions. As Fletcher, Rhodes shares a combustible chemistry with Day. The character embarks on his own journey as he tries to make his mark as one of the first Black agents at the FBI. Holiday’s circle of friends, which include Miss Lawrence as the protective Miss Freddy and Da’Vine Joy Randolph as the supportive Roslyn, share a warm camaraderie with the singer. Hedlund acts like a cartoon villain as Anslinger, who in real life started America’s “war on drugs” campaign. In a head-scratching move, the versatile Natasha Lyonne is underused as movie star Tallulah Bankhead, who may have had a romantic relationship with Holiday. Leslie Jordan adds a quirky vibe as Holiday’s interviewer.

Ultimately, “The United States vs. Billie Holiday” is a mediocre film lifted by a masterful performance. Day carries the uneven biopic on her capable shoulders, deserving acclaim for her transformation into the legendary songstress. But the film’s muddled narrative, frenzied storytelling and problematic exploitation of its leading lady add too many sour notes. Where the film may fail its real-life subject, it may end up propelling the career of its refreshing, rising star.