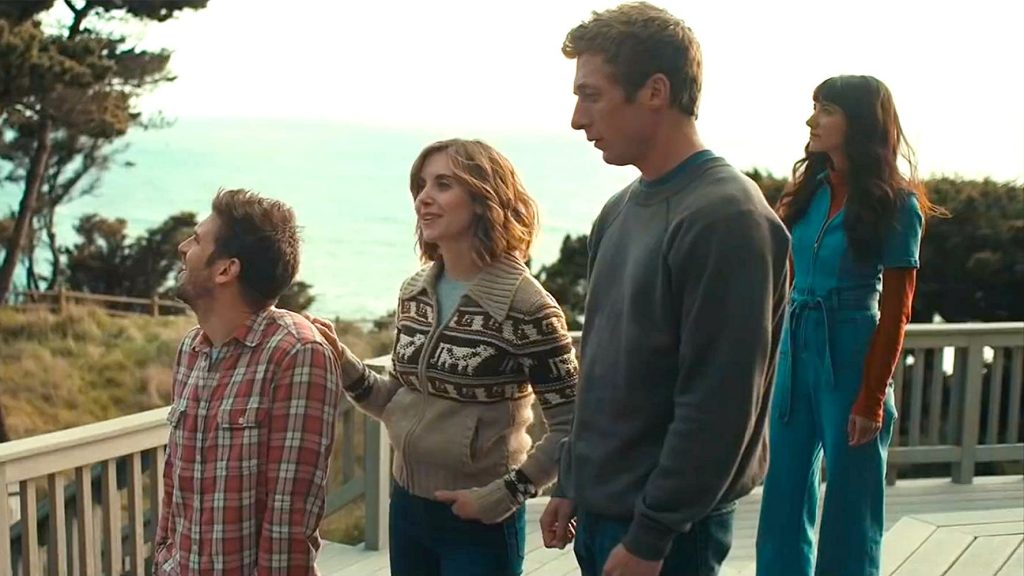 Have you ever stayed at an Airbnb? I haven’t, and I’m not sure I will after seeing “The Rental.” The new horror flick plays on the fear of renting the home of a stranger you’ve never met. Dave Franco’s promising directorial debut is heavy on atmosphere and character drama, skillfully winding up the tension.

The vacation thriller starts out strong. But the film isn’t as well-executed as it could be. The things “The Rental” makes you think are important fall to the wayside as the film devolves into a standard slasher. The ending feels disconnected from what came before it.

“The Rental” follows two couples who book a beach house for a relaxing weekend getaway. Charlie (Dan Stevens) and Michelle (Alison Brie) have been married for 10 years. Charlie’s work partner, Mina (Sheila Vand), is dating his brother, Josh (Jeremy Allen White). When the couples arrive at the Airbnb rental, they are greeted by gruff caretaker Taylor (Toby Huss), whose brother owns the vacation home.

A night of hard partying leads to regret in the morning – and the discovery of cameras in the showers. Knowing they’re being watched, but not by whom, the group is determined to ride out their last night. But when events spiral out of control, the couples must face their insecurities as a mysterious killer threatens their lives.

Known for his performances in the “Now You See Me” and “Neighbors” films, as well as being James Franco’s brother, Dave Franco shows real talent behind the camera. The actor, who also co-wrote the screenplay, thrives in establishing the moody aesthetic. During the day, the couples find serenity on the gorgeous beach, its calming waves and nearby trails. But at night, unnerving shadows and a thick fog surround the beach house, with threatening cliffs nearby. The setting’s dual nature lets viewers know something sinister is lurking beneath the tranquil surface.

The film excels at setting up the character dynamics. “The Rental” includes visual cues early on that foreshadow the story’s conflicts. When viewers first meet Charlie, Mina is peering over his shoulder, making us think they’re a couple. The two characters share a strong connection, which brings out feelings of insecurity in Michelle and Josh. The screenplay mines the growing unease between the four characters as they start to turn on each other.

The horror flick creates tension right away, tapping into current social issues. When Mina, whose nationality is Middle Eastern, tries to book the house, she is rejected. But when Charlie, a white man, sends his request an hour later, it’s accepted. Mina confronts Taylor about the booking, and the caretaker’s response leaves viewers wondering if he may be racist. The uncomfortable exchange puts the group on shaky ground with Taylor from the get-go, creating an environment of distrust. This is heightened by the frightening discovery of the cameras.

The capable cast carries the weight of the character drama. As level-headed peacemaker Charlie, Stephens takes on the mantle of the group’s leader. But as more comes out about his character, the actor peels back a darker nature. Brie, Franco’s real-life wife, adds welcome comic relief. But Michelle becomes the most sympathetic character, questioning if she really knows her husband. As Mina, the strong-willed Vand is tormented by her feelings for both brothers. White conveys Josh’s inferiority complex as the younger brother tries to measure up. Huss brings menacing undertones as the sarcastic Taylor.

With its character-driven story, “The Rental” seems to plant seeds that will appear to be important later, including the issue of racism. But as the horror film draws to a close, the screenplay abandons its thought-provoking questions and character development for the predictable tropes of a slasher flick. Once the dominoes start falling, the film morphs into a generic outing.

Perhaps this is why “The Rental” throws in a last-act twist. The ending is such a departure from the rest of the film that I wasn’t even sure what was happening at first. With the reveal, the bulk of the film ends up being a red herring. The ill-executed bait-and-switch could be confusing to viewers.

The screenplay also suffers from logic issues. Charlie and Mina are supposed to be smart. But the pair make the kind of bad decisions that the characters in horror movies always make. The reason the film gives for why the characters don’t call the police after they discover the cameras is silly. Yet the film runs with it for the rest of the movie.

With its suspenseful atmosphere and engrossing characters, “The Rental” is worth a rental. The thriller marks a solid directing debut for Franco, who shows he has a flair for horror. However, the script needed some upkeep to keep it from falling into the clichés of the genre. As for me, I won’t be renting an Airbnb anytime soon. 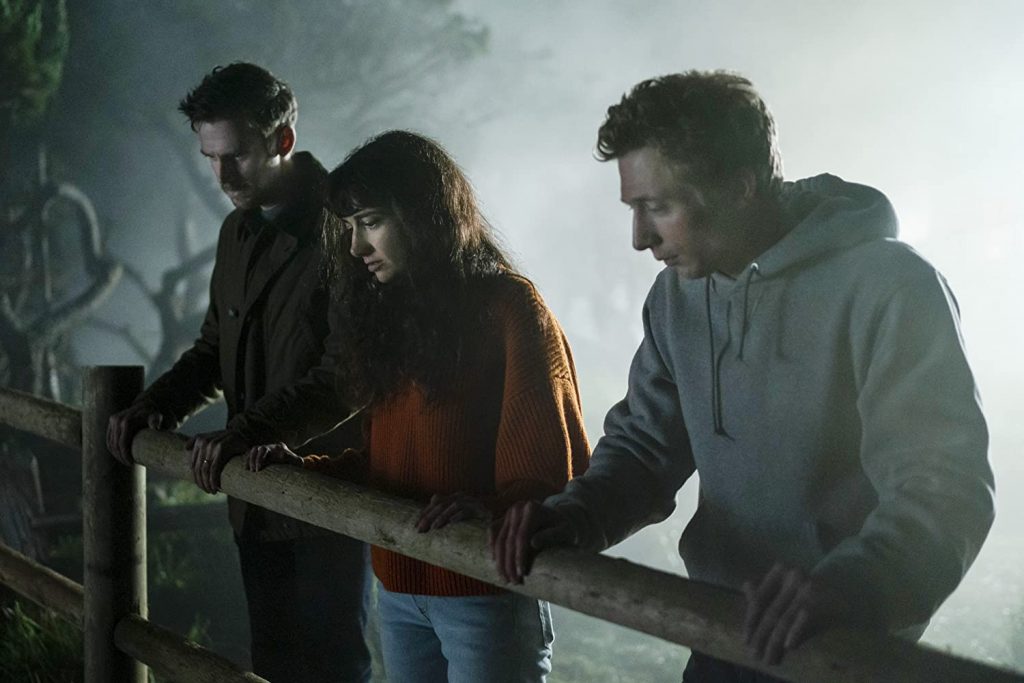 As you may know, I’m not a horror connoisseur and for the most part don’t really enjoy the genre. However, seeing Dave Franco in the director’s chair for the first time and big names attached, “The Rental” was worth a shot.

When I say big names, that includes Dan Stevens, Alison Brie, Sheila Vand and Jeremy Allen White. They aren’t A-listers, but that’s a lot of pop for an IFC Film. I know Brie from “Community” and as the voice of Unikitty in “The Lego Movie.” Oddly, she’s the actor I know the best, besides her husband Franco who is seated behind the camera this time. This is also the first horror movie I watched since “It: Chapter 2.” I had no idea what to expect, and I think that’s why I found the film … refreshing.

I’m seeing a lot of reviews that say “The Rental” dips into the horror movie tropes. It definitely does, but I don’t watch a lot of horror films. So, it didn’t really bother me because it’s not the whole film. The movie also plays with audience expectations, which I also see bothers people. However, that’s what made the film interesting to me. There’s a bit of a disconnect between people who are more in tune with the genre and me. A lot of the things I enjoy about it will serve as the film’s downfall to others.

The script does a nice job developing the characters. I really enjoyed the connection between Brie and White, who were not actually in a relationship but their time on screen together felt real. It also sets up the mysterious supervisor of the Airbnb Taylor (Toby Huss) well. I see reviews that say the setup is all for naught, but I disagree. It allows Franco to slowly turn up the tension because there’s chaos inside the group of friends as someone is also lurking outside the Airbnb, playing on what the audience has learned about them.

One thing that confuses me is Dan Stevens. Is he a good actor? I’m legitimately asking because everything I’ve seen him in he’s mediocre at best. The problem is I’ve only seen him as Beast in the “Beauty and the Beast” remake and this. I’m probably missing the show or movie he’s really good in, but he hasn’t been a draw for me. Stevens and Vand are really the main characters of the film, even though Brie and White get a lot of screen time. That’s a problem for me because I didn’t find them all that interesting or likable.

It’s tough to get into a lot of what I liked about the film because it would spoil it. However, the setup is good and the end while controversial worked for me. I liked the direction it went. I thought Franco’s best sequence in his directorial debut came toward the end of the film when he subtly shows how much effort the Airbnb intruder put into staking out the residence without saying anything.

While “The Rental” does turn into a slasher film by the third act, the villain seems pretty smart and uses his knowledge effectively. He also mostly lurks off screen. I tend to find that’s a more effective way to build tension. The audience fears the unknown more than the known.

“The Rental” builds an expectation for what the movie is about and pulls the rug out from under the audience. The ending is ambiguous and trying to find a meaning behind it can be frustrating. The film establishes racial tension and unfaithfulness, serious subjects and topics tackled in much better horror films like “Get Out.” Some may feel that it disregarded those topics, but I think it fed into the group dynamic. As the group and Taylor separated themselves and didn’t work out their differences, it made them vulnerable to the threat lurking in the shadows. Showing a prejudice and lying make it impossible to create a united front to handle other problems. Maybe I’m just connecting dots because this country is currently struggling with prejudice and politics, which have left us incapable of handling the coronavirus pandemic, but I digress. The issue is it took me until right now in this paragraph to come to that conclusion. I’m not kidding. This paragraph was entirely different 15 minutes ago.

Franco shows promise in the director’s chair, but this is far from a home run. I liked it, but fans of the genre seem to find it generic. I think there’s something more to it, but “The Rental” doesn’t execute its purpose well enough to warrant a barely above average rating.