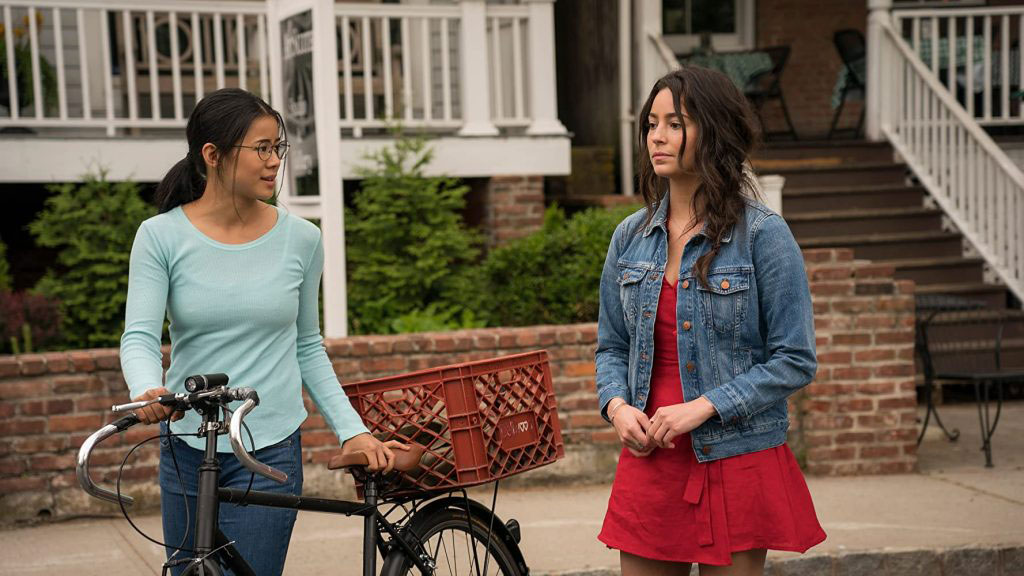 Review: “The Half of It”

As sweet as it is smart, “The Half of It” is a delightful coming-of-age story. With its likable young cast, Netflix’s latest teen romance plays with the conventions of its genre, putting a modern-day spin on “Cyrano de Bergerac.” The film is better than your average teen rom com. But writer-director Alice Wu’s ambitious screenplay tries to take on too much at once, resulting in a slightly lopsided film.

Taking place in the fictional small town of Squahamish in the Pacific Northwest, “The Half of It” focuses on intelligent and shy high school student Ellie Chu (Leah Lewis), who runs a business writing essays for her schoolmates. The arts-loving Ellie lives with her immigrant father Edwin (Collin Chou), who works for the railroad. She endures daily ridicule from her classmates for being the lone Chinese student.

The lonely teen gets a different kind of assignment when football player Paul Munsky (Daniel Diemer) offers to pay her to write love letters for him to the popular Aster Flores (Alexxis Lemire), the daughter of the pastor of the local church. What Paul doesn’t know is that Ellie already has feelings for Aster. The three teens form an atypical love triangle as they learn about love, friendship and sexual identity.

“The Half of It” feels deeply personal. In her second feature film, Wu brings her own experience as a lesbian Asian American with immigrant parents to the insightful script. As Wu’s stand-in, Ellie comes across as a fully-fledged character, and her interactions with those around her feel authentic. Lewis does a tremendous job of tapping into Ellie’s struggles, from being ostracized at school, to fighting her feelings for Aster, to gradually letting Paul in. As Ellie tries to keep up a strong facade, Lewis’ facial expressions give away what the character is really feeling.

The refreshing film takes the standard teen romance and mixes it up. Ellie adds a lesbian twist to the traditional young-adult love triangle, sharing believable chemistry with both Aster and Paul. The film does a great job of showcasing the conversations between its main characters, trusting its trio of talented leads to do a lot of heavy lifting. Going against the genre’s well-worn formula, the film’s ending feels true to real life.

Living in a small, conservative town restricts Ellie and Aster from openly exploring their same-sex feelings, so the Cyrano guise allows them to do just that. Whether they’re opening up their letters or their text messages onscreen, Ellie and Aster’s conversations reveal shared insights into “The Remains of the Day” and a mutual appreciation for art. As Aster, Lemire delves into the character’s conflict of being accepted into the popular crowd for her looks despite knowing she is looked down upon for being poor.

The teen rom com excels in developing the unlikely friendship between Ellie and Paul. As Ellie teaches the inarticulate athlete the art of conversation, they do so over ping-pong, a great metaphor for sustaining the back-and-forth of a good talk. They begin to care for one another, with Paul standing up for Ellie against her tormenters. With his wide smile and kind eyes, Diemer shows Paul is much more than the “dumb jock” stereotype. The enterprising young man wants to leave his stamp on his family’s sausage company and searches for ways to change up the recipe.

“The Half of It” builds a mostly good first half, with some flaws bringing down its second half. What hampers the film is its inability to juggle everything on its plate.

Not all the film’s storylines are given ample time. As an immigrant, Ellie’s father Edwin is held back by his poor English and unable to advance at the railroad. This is an interesting angle on the film’s immigration theme, but the movie doesn’t devote enough time to it. Edwin also never has a conversation with his daughter about her sexual orientation, which seems odd in a film that is determined to explore it.

The script also makes some unusual choices in revealing new information. In a talent show sequence, a character shows up with a new instrument for another character to play. The questions surrounding how this character would know to grab the alternate instrument distracts from the emotional significance of the scene.

A dramatic third-act confrontation feels staged, abandoning the film’s organic progression of events up to this point. The argument reveals one character’s stance about same-sex relationships, an important aspect which comes out too late and could have added to the film’s conflict.

With its introspective screenplay and great performances, “The Half of It” delivers a thoughtful and enjoyable take on teen rom coms that resonates with current times. Wu’s unique voice is one that should be heard. Though the film struggles to find the right balance between everything it wants to say, it says a lot more than most films in the genre. 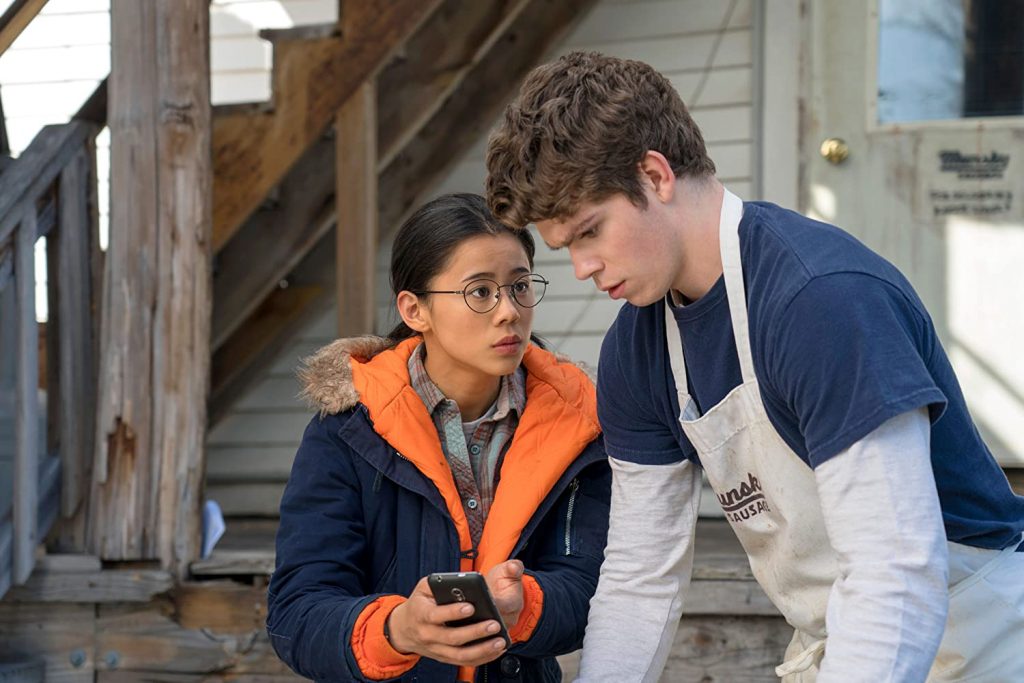 Leah Lewis and Daniel Diemer star in “The Half of It.”

“The Half of It” tries to twist the typical coming-of-age genre and for the most part succeeds. While a love triangle forms, it is not simply the guy or girl will choose one or the other. The number of possibilities that can come out of it is equivalent to basketball coaching great Phil Jackson’s triangle offense. That character dynamic, and the actors on each side propel “The Half of It” to its peak.

Ellie Chu, played by Leah Lewis, agrees to write letters to Aster Flores (Alexxis Lemire) on behalf of Paul Munsky (Daniel Diemer) in an attempt to get Flores to date Munsky. The problem for Chu? She also loves Flores.

The dynamic among the three proves so engaging. Lewis leads the trio with a powerful performance as her character struggles with love. While her clear focus at the beginning of the film falls toward Flores, she starts to build chemistry with the boy (Munsky) she’s trying to help win her heart. Lewis conveys that struggle beautifully. The audience feels that confusion as she searches for her identity.

When Munsky enters the film, the audience assumes he’s a dumb jock who is at least a starter on the football team. As the movie peels away the layers, the audience realizes that he’s ultimately a nice guy, who is a little dim. The film also reveals that he is the second-string tight end on the worst high school football program ever assembled. We’ll get to this film’s understanding of football later. Diemer plays the part well. The character needs to be likable and adorable. Diemer accomplishes that.

Flores is a mystery and the film does a nice job keeping her off to the side. The audience knows some things about her, but not everything. The movie shares the parts of her that make the audience relate to her and understand why these two high schoolers would fall in love with her. She needs to come off as the perfect girl even though she’s not. In a role based mostly on body language, Lemire completes the love triangle perfectly. The trio’s believable relationship is the best part of the film. Everything around it proves flawed.

The beauty of “The Half of It” is that it feels very real. So when it suddenly veers into the unrealistic, it takes the audience out of the movie.

One of Chu’s teachers blatantly knows Chu writes papers for other students in exchange for cash and is happy about it. The teacher would rather Chu keep doing it so she doesn’t have to read and grade six bad papers. Also, when the teacher finds out Chu has been writing love letters for cash, she becomes upset that she has stopped cheating for half the class. The film tries to set up a dynamic between Chu and the teacher, but just abandons it. You probably noticed this because I keep calling her “the teacher.” There’s nothing built between them to justify the lack of discipline.

The audience is also made to assume Chu is a nerd and everyone makes fun of her. The audience can buy that, but it just follows all the usual tropes. Someone knocks the books out of her hands. Her peers find a way to make fun of her name and sabotage her talent show performance. For a film that tries to extend the boundaries, it’s weird that it stays in them from time to time. Speaking of the talent show, the scene is absurd. First, students sabotage the piano Chu is about to play and then Munsky comes to the rescue with a guitar and she plays her song on that. That for some reason makes all the students applaud and suddenly support her. Also, shouldn’t they not make fun of her in the first place? She does their homework!

Finally, we’ve arrived at the most egregious scenes in the film. When football is discussed and especially when it’s on screen, the film teleports the audience to another room. That is how much the filmmakers knew about football. It could have used just one quick consult. It’s supposed to be played for humor, but it’s such a dumb plot point. Earlier in the movie, a pass hits Munsky directly in the helmet. He’s not even looking or running a route. He looks like he’s just on a run. I could have lived with that, but then this happened.

Munsky’s team is punting and Munsky is on special teams. He runs down the field waving to Chu for an absurd amount of time. It’s not even the beginning of the game. The score is 49-0. So, it’s only at this point Munsky decided to wave to his friends? Meanwhile, the punter is running in his direction because there was a bad snap and he had to take off. He then fumbles directly into Munsky hands where he takes it for a touchdown. As if that is not enough, the audience finds out the team has not only never won a game in 13 years, but it also hasn’t scored. Not one point. In 13 years. Again, it’s supposed to be played for humor, but this whole subplot is just dumb. The high school football program would have folded if it hadn’t scored in 13 years. That was just so far out of left field, especially for a supposedly realistic film.

At its core, “The Half of It” is a great film with strong performances that succeeds with its different take on a coming-of-age film. It’s a shame the absurd and formulaic scenes sometimes get in the way.