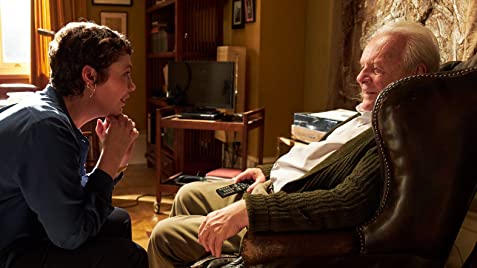 Watching a once vibrant relative suffer from dementia is painful to bear. It’s agonizing when a parent or grandparent – someone you’ve known your whole life – doesn’t recognize you or mistakes you for someone else.

While several movies have focused on the effects of a loved one’s dementia on those around them, the innovative “The Father” recreates the confusion and disorientation that comes with the disorder from the point of view of an aging man slowly succumbing to it.

Nominated for six Academy Awards, the powerful drama boasts meticulous production design, creative casting and a pair of dynamic performances. As unsettling as it is inventive, “The Father” deserves its place among the best picture nominees.

The drama follows Anthony (Anthony Hopkins), an aging London resident who has fallen out with his caretaker. His daughter Anne (Olivia Colman) is trying to find a new companion for him as his memory loss progresses.

However, Anthony insists he can take care of himself in his own flat – although he may actually be staying with his daughter. Anne tells him she will be leaving to move to Paris with her new boyfriend – but yet her husband appears to be staying with them. And the new caretaker (Imogen Poots) looks a lot like Anthony’s younger daughter Lucy – or does she?

As Anthony struggles to comprehend the changing apartment and faces around him, the elderly man begins to question his reality and sanity.

In exploring the advancing stages of dementia, “The Father” artfully blends its purposeful dialogue with a revolving set and cast. The drama is based on a stage play by Florian Zeller, who directed and co-wrote the screenplay. The script delivers certain pieces of information about Anthony and Anne’s lives, but doles them out in various ways. The technique imitates the scattered nature of Anthony’s mind. Like Anthony, the viewer is questioning the accuracy of the information and the order of events, which helps us to understand his plight.

Like a play, the film’s sets are minimal, but the surroundings require viewers to pay attention. Furniture and items are constantly moving around the flat, testing Anthony and the audience. Whether its grocery bags or chairs, the tiniest of movements upsets Anthony in a space he claims to have occupied for years. We repeatedly see a painting hanging in the living room, only for it to later disappear – and we’re told it was never there in the first place. The painstaking production design replicates the disorientation that accompanies dementia.

The drama uses multiple actresses and actors for the same roles to show Anthony’s inability to recognize the people around him. The unique casting demonstrates a facet of dementia that afflicts many of its patients. After Anne goes out, the character played by Colman returns as a different woman – actress Olivia Williams. But Anthony is also surprised to encounter Anne’s “husband,” played by both Rufus Sewell and Mark Gatiss. The audience can feel Anthony’s confusion as he tries to make sense of the situation.

As “The Father” himself, Hopkins delivers a devastating performance, putting the best actor nominee in the running for his second Academy Award. Hopkins starts out alarmingly lucid as Anthony, adamant that his caregiver stole his watch. But the brash veneer crumbles as Anthony slowly loses his grasp on reality.

The Oscar winner shows us glimpses of the charismatic man Anthony used to be alongside the fragile man he now is. In one memorable scene, Anthony turns up the charm as he meets his new caregiver Laura. But with one breath he insults her, stunning the audience. In an upsetting instance of elder abuse, Hopkins conveys Anthony’s helplessness. Later, when a vulnerable Anthony cries out for his mother, Hopkins’ painful plea is utterly affecting. The acting legend earns the audience’s sympathy on this unnerving journey into a man’s deteriorating mind.

As the collected but weary Anne, Colman shares a believable chemistry with Hopkins. The two often engage in a combative back-and-forth in their strained relationship. The Oscar nominee for best supporting actress pulls off a tricky balance here. As Anne, Colman dons a brave face while letting the frustration of her father’s condition seep into her expressions. Anne is hurt by her father’s inability to recognize her, but she remains devoted to him. The relatable Colman seizes on this emotional push-and-pull, depicting the strife of being a parental caretaker.

With its circular storytelling, “The Father” can be confusing. As we try to understand what’s happening to Anthony, the script doesn’t give us clear answers. The film asks us to accept that, which may be hard for some viewers to do. The drama is also hard to watch, especially if you have or had a loved one going through a similar experience.

“The Father” boldly delves into the unsettling nature of a disorder that wreaks emotional havoc on its patients. Its visionary approach to set design and casting help convey what’s like to live with dementia. Hopkins and Colman give award-worthy performances that ground the film.

Though the drama is confusing at times, “The Father” tackles an issue that many families experience as their loved ones enter old age. Though not necessarily a threat to win best picture, the innovative and emotional film is worthy of its spot for its sympathetic portrayal of dementia. 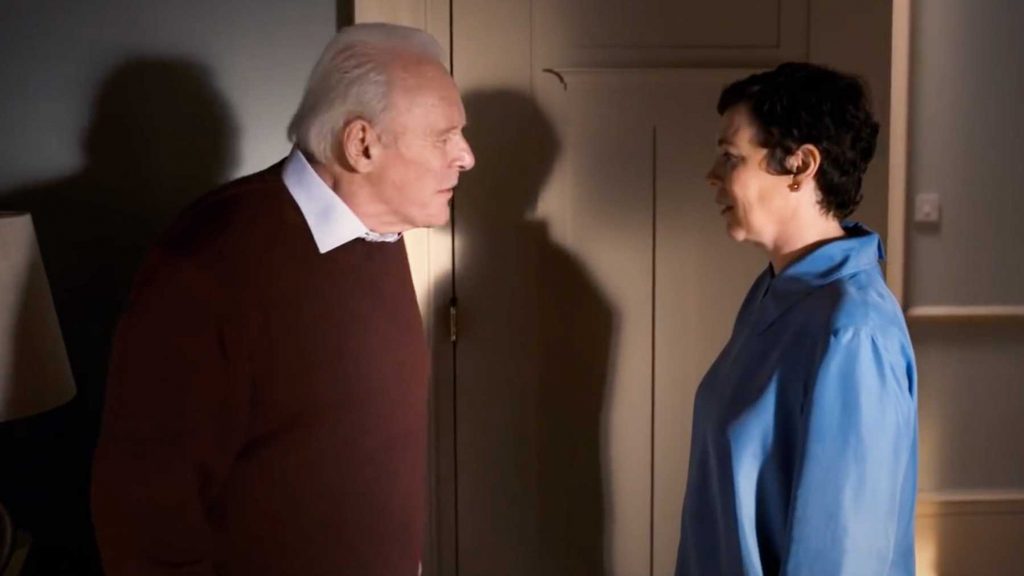 Anthony Hopkins and Olivia Colman star in “The Father.”

The critically acclaimed, Best Picture-nominated “The Father” explores dementia through the lens of a person with the condition. The well-executed film accomplished what it set out to do, but its setup didn’t meet my expectations.

The film quickly establishes Anthony’s (Anthony Hopkins) dementia as it opens with him struggling to even recognize his daughter Anne (Olivia Colman). From there the twists and turns begin as a different woman (Olivia Williams) enters what Anthony believes to be his flat and claims to be his daughter Anne.

That setup made “The Father” seem like a mystery/thriller, which quickly got me invested in the film. That’s not the movie.

Regardless, “The Father” had me on the edge of my couch as I impatiently waited for the big reveals that never came. This frustrated me, but I commend films for having a singular focus, and “The Father” admirably sticks to its premise. It focuses on Anthony’s struggles from his perspective and at no point deviates.

Hopkins rightfully earned a best actor nomination for his dynamic performance in the leading role. The powerless man tries to mask his vulnerability, and Hopkins captures this masterfully. He connects with the audience and garners its sympathy, even when he’s downright cruel. Hopkins also ramps up the charm during one scene when he tries to prove nothing is wrong with him and accentuates it by quickly changing course and insulting a potential caregiver. Later, he finally releases his vulnerability in a powerful and heartbreaking sequence.

Hopkins teams with the great Colman, who captures a realistic portrayal of the daughter of a person with dementia. The best supporting actress nominee balances many emotions as she tries to care for her father, while maintaining her own life with her husband. She shows she loves her father and remains patient with him while her frustration seeps through. The duo builds a believable father-daughter relationship that makes the audience forget they are acting.

The perfect casting continues with Williams in her small and mysterious role. She makes the most of her time on screen and beautifully handles an important scene. Ever since I saw him in “A Knight’s Tale,” Rufus Sewell (Paul) embodies evil so well. While he loves his wife, Paul’s time on screen with Anthony leaves the audience uncomfortable. Sewell captures that uneasiness perfectly. Mark Gatiss also works well in his mysterious role. I never like to see him in movies or shows because I wish he were writing more episodes of BBC’s “Sherlock.” However, I’ll admit he works well. Strong character actress Imogen Poots (Laura) proves charming and a great addition to the movie.

The film does a beautiful job with its seamless adjustments to the flat where most of the movie takes place. It adds to Anthony’s and the audience’s confusion.

While “the Father” accomplishes the confusion it set out to create, that still means the movie confuses, leaving a lot to the viewer’s interpretation. The audience watches Anthony struggle, while struggling at the same time to put the pieces together. Is that what the movie strived to create? Yes. It just didn’t land for me. It felt incomplete. I needed more than Anthony’s perspective, and that frustrated me.

“The Father” captures the devastating life of a person with dementia perfectly through the lens of a man with the condition. While beautifully executed with award-worthy performances, it leaves the pieces of the puzzle scattered on the table with no hope of the audience putting it together. I admire the film for accomplishing what it set out to do and keeping a singular focus. That confusion will work for audiences, but it left me frustrated as the film’s credits rolled. It’s a strong film I wanted to like, but it wasn’t for me.