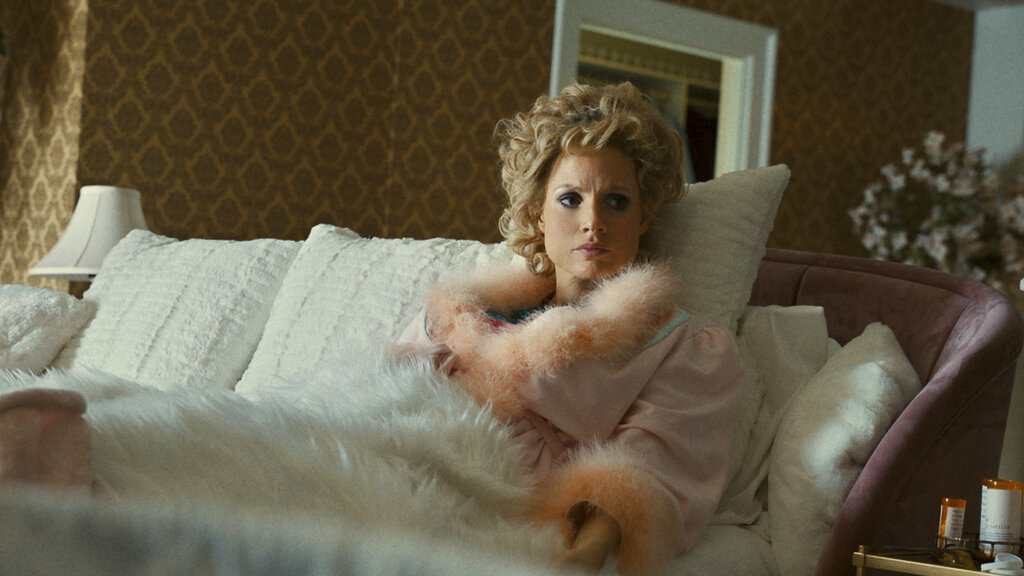 Review: “The Eyes of Tammy Faye”

When it comes to food, I play it safe. I find something I like on the menu and I usually stick with that every time I go to that restaurant. When it comes to ice cream, the vanilla flavor is the safest bet. I get it all the time and I enjoy it. There’s nothing wrong with vanilla ice cream. Truthfully though, vanilla ice cream is the basic ingredient, the foundation. It’s not until you add toppings that the dessert goes from good to great.

The biopic may be the most overdone genre in Hollywood and many films don’t move the needle. Based on a 2000 documentary of the same name, “The Eyes of Tammy Faye” provides a powerhouse performance that may make audiences think twice about skipping this new entry into the tired genre.

As I’ve mentioned before, Jessica Chastain is my favorite actress so I try to see every film she’s in no matter how bad it looks. While sometimes the movies fall flat, Chastain never disappoints. She amazed again in a role unlike any other she portrayed in the past. While she excels playing a strong-willed woman with a tortured past, Chastain hasn’t had to disappear into a character until her role as the title character. While she transforms physically throughout the movie, especially with her gobs of makeup, Chastain carries a peppy accent throughout the film that never breaks. Although she’s my favorite actress, she proved unrecognizable by the end of the film, exactly what this performance needed. She perfectly embraced Tammy Faye.

Chastain also boosted powerful moments, often effortlessly engaging the audience with subtle facial expressions. The film opens on a closeup of her face in full makeup and it was clear from that moment the director made a choice to capture her face whenever he could because Chastain is just that good. She felt every scene, she commanded every scene and once again proved why she’s one of the best actors in the business.

Andrew Garfield (Jim Bakker) has been very selective in his movie choices since his time as Spider-Man ended in failure, to no fault of his own. Garfield is another great actor who gives one of my favorite performances as Eduardo Saverin in 2010’s “The Social Network.” It’s always great to see him in a project and there should be several Oscars in his future. He does a great job again alongside Chastain. He nails his transformation throughout the film and really makes you hate him by the time it’s over. Garfield has to go toe-to-toe with the great Chastain and he keeps up with her. He never outshines her, but not many can.

Cherry Jones (Rachel Grover), Vincent D’Onofrio (Jerry Falwell) and Fredric Lehne (Fred Grover) also give strong performances. Jones effectively remains one-note as Tammy Faye’s mother. This is necessary as Tammy Faye works so hard to impress her, but can’t break down the wall that separates them. Jones plays it perfectly as the audience can see the cracks in the foundation. It’s a patient performance as the character slowly moves toward accepting and embracing her daughter. D’Onofrio doesn’t have a lot of screen time, but proves memorable. Lehne surprised me as Tammy Faye’s stepfather. For most of the film he plays a side character, but comes to the forefront for an effective sequence.

“The Eyes of Tammy Faye” also has strong themes combined with still timely issues. It highlights acceptance, self-worth and living life to the fullest. It also touches on Christianity’s flaws and a religion that claims to accept all, but is clearly only interested in certain demographics. Tammy Faye fought for the church to be more accepting of the LGBTQ+ community, a battle that still rages on especially after Pope Francis ruled priests can’t bless same-sex marriages a few months ago.

I’ve discussed a lot of good here. So, what went wrong? The writing and direction just weren’t there to take this biopic to the next level.

Michael Showalter has proven an excellent director in the past. The Oscar-nominated “The Big Sick” was one of the best movies of 2017. What made that film work (besides incredible writing from Kumail Nanjiani and Emily V. Gordon) was its focus on character and the intimate setting of the characters. It allowed them to interact, develop and engage the audience. “The Eyes of Tammy Faye” covers too large of a time period for the audience to really have a chance to get to know Tammy Faye. While we learn some things about her, the film doesn’t dig too deeply under the surface.

Abe Sylvia wrote two episodes of Netflix’s “Dead to Me” and serves as a producer for the phenomenal show. That show thrives on raw character development. The audience gets deep into the lives of the protagonists. However, there’s nothing raw about “The Eyes of Tammy Faye.” It’s mostly cookie-cutter and on the surface. That’s a shame because they clearly had the talent to do something special. I would have loved to have seen a raw sequence with Tammy Faye that really allows the audience to connect with her. What makes Tammy Faye worth sitting two hours in a theater for? I have no doubt that she is interesting enough, but the film doesn’t give a resounding answer to that question. Instead, it hits its beats and glosses over a lot of interesting plot points to get to the end, making it no different from many biopics before it.

Chastain carries “The Eyes of Tammy Faye” with one of the greatest and most unique performances of her already illustrious career. While it serves its purpose and checks the boxes for what makes a biopic, very little past a phenomenal performance makes the film special or memorable. Is it good for the most part? Absolutely. However, vanilla ice cream is good, too. It just isn’t as exciting without rainbow sprinkles, chocolate syrup or a brownie to go with it. 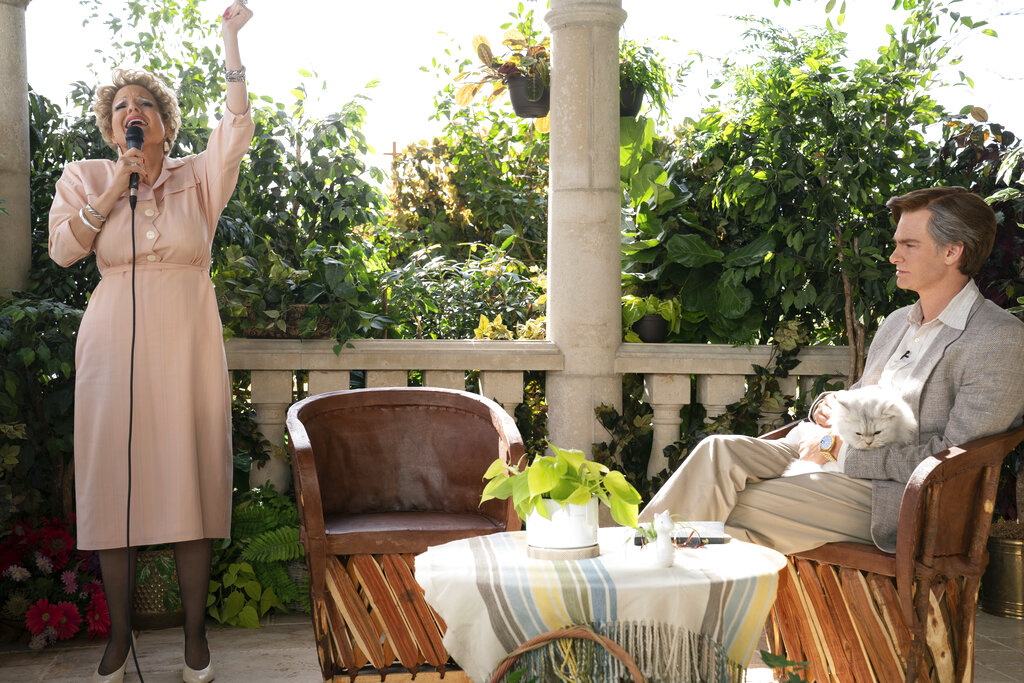 “The Eyes of Tammy Faye” opens with a closeup of the trademark feature of its subject, love-her-or-hate-her televangelist Tammy Faye Bakker (Jessica Chastain). With her pronounced eyeliner, glitzy eye shadow and thick black lashes, Tammy Faye explains, “This is who I am.”

The lavish biopic is told through Tammy Faye’s perspective, bolstered by an electrifying performance by the committed Chastain. But while the film focuses on her point of view, it never lets us into Tammy Faye’s head. “The Eyes of Tammy Faye” is little more than a by-the-numbers entry in the well-worn genre.

Taking its inspiration from the 2000 documentary, “The Eyes of Tammy Faye” chronicles the rise and fall of embattled televangelists Tammy Faye and Jim Bakker (Andrew Garfield). The couple built the PTL Satellite Network and theme park, enjoying the fruits of their empire until fraud allegations and sex scandals ended their reign.

Like other entries in the genre, “The Eyes of Tammy Faye” checks off the boxes of a standard biopic. What makes this one worth seeing is Chastain. The Academy Award-nominated actress’s fervent portrayal of the strong-willed, groundbreaking figure holds the film together. Chastain completely disappears into the role, donning garish makeup, prosthetics and wigs to play Tammy Faye through the decades. The film’s elaborate costumes and makeup, especially during the 1970s and ’80s, are exquisite. Chastain adopts Tammy Faye’s distinctive drawl, never once breaking from it, and even performs her own singing.

The film paints a sympathetic portrait of Tammie Faye. Serving as a producer, Chastain is clearly invested in bringing Tammie Faye’s story to the big screen. The actress channels the televangelist’s passion for spreading the word of God and her charismatic ability to reach out to others through TV. The actress also captures Tammy Faye’s blind devotion to Jim, as well as her loneliness and pain. In one scene, Chastain conveys Tammy Faye’s hurt as she overhears Jim and others at the station make fun of her caked-on makeup.

The biopic also highlights Tammy Faye’s acceptance of different groups. An ally of the LGBTQ+ community, Tammy Faye used her platform to spread inclusivity. The film points out that although Christianity claims to love everyone, the church still struggles to welcome gays, lesbians and those who exist outside traditional gender norms. “The Eyes of Tammy Faye” also spotlights Tammy Faye’s embrace of AIDS patients. In its most powerful moment, the film recreates her interview with a gay man living with AIDS. Chastain’s warm approach brought tears to my eyes.

While “The Eyes of Tammy Faye” delves into its central figure, it doesn’t dig deep enough. The surface-level biopic shows us what Tammy Faye sees, but it doesn’t show us what she thinks. By recounting Tammy Faye’s life from beginning to end, the film misses an opportunity to narrow in on key events and let us into its leading lady’s head.

When Jim is accused of misusing funds raised by PTL, the film shields Tammy Faye. It’s unclear what she knew about the financial mismanagement. “The Eyes of Tammy Faye” portrays her as blissfully ignorant, allowing her to skirt accountability.

In an odd move, “The Eyes of Tammy Faye” glosses over critical parts of the Bakkers’ lives. The film barely includes a passing reference to Jessica Hahn, who was paid with PTL funds to keep quiet after accusing Jim of rape. The movie also insinuates that Jim had a sexual relationship with his male assistant, but shies away from exploring it. “The Eyes of Tammy Faye” brings in church contractor Roe Messner (Sam Jaeger), but never mentions that Tammy Faye later married him.

With the spotlight on Chastain, “The Eyes of Tammy Faye” surrounds her with a great cast. Garfield taps into Bakker’s aw-shucks persona before revealing his manipulation and coldness. He can be downright chilling, and it’s easy to dislike him. But the actor wisely gives Chastain the breathing room to be the larger-than-life Tammy. Cherry Jones shines as Tammy Faye’s mom, Rachel Grover. She questions and challenges Tammy Faye before learning to embrace her daughter. In his limited screentime, Vincent D’Onofrio makes an impact as the Rev. Jerry Falwell.

“The Eyes of Tammy Fae” is a perfectly fine biopic elevated by Chastain’s transformative performance. Otherwise, there’s little that’s memorable about it. Showing reverence for its leading lady, the film succeeds in conveying Tammy Faye’s perspective. However, the technique limits the film in going as far as it could have to understand the inner workings of its polarizing subject. The run-of-the-mill biopic misses its chance to stand out like its central character’s bold eye makeup.