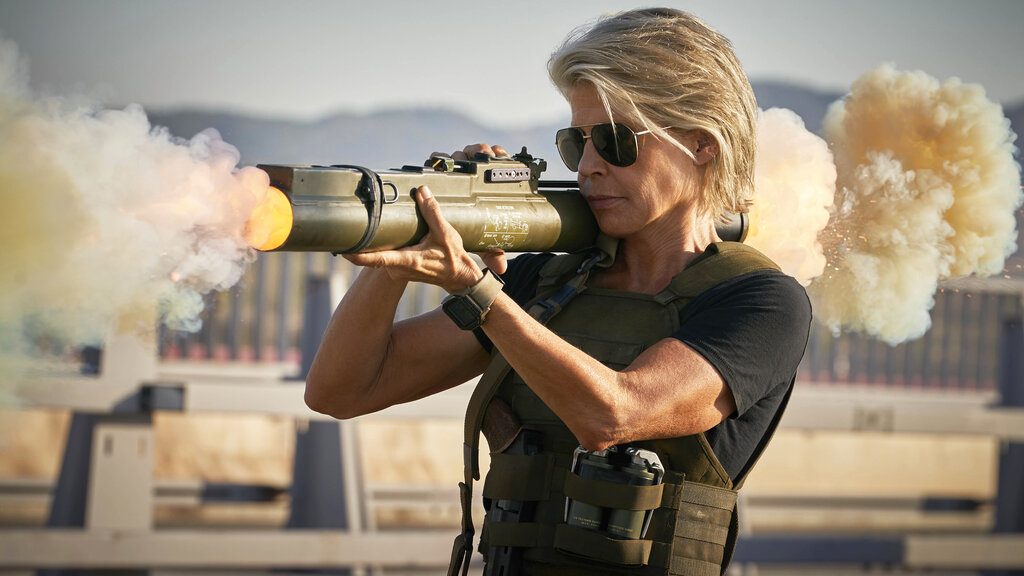 Sarah Connor is among the greatest action heroines in film history. Played by Linda Hamilton in the “Terminator” franchise, the character dramatically transformed from a mousy waitress in the groundbreaking “The Terminator” (1984) into a brave warrior in its acclaimed sequel “Terminator 2: Judgment Day” (1991).

But the sci-fi franchise has been on life support since Hamilton last played the role in “T2.” After two underwhelming sequels – 2003’s “Terminator 3: Rise of the Machines” and 2009’s “Terminator Salvation” – and a failed reboot effort in 2015’s “Terminator Genisys,” the series needed to call in the big guns.

Enter Hamilton. After a 28-year absence, the veteran actress makes a welcome return to the iconic role of Sarah Connor in “Terminator: Dark Fate.” The sixth film in the series aims to push the reset button on the struggling franchise.

“Terminator: Dark Fate” powers up an entertaining sequel, with the return of its beloved star and intense action. But “Dark Fate” delivers just a spark of new life when the franchise really needed a hard jolt.

The latest entry in the “Terminator” series disregards all the installments after the first two. Picking up 25 years after “T2,” the story follows Dani Ramos (Natalia Reyes), a young woman with an important role to play in the future war between humans and machines. Hunting Dani is the relentless, shape-shifting Rev-9 (Gabriel Luna), a time-traveling Terminator.

Protecting Dani are Grace (Mackenzie Davis), a human/machine hybrid sent from the future, and Sarah Connor, the mother of John Connor, the leader of the human resistance. As the three women try to outrun the Rev-9, they receive some help from a familiar face – a grizzled T-800 model Terminator (Arnold Schwarzenegger).

Looking to ease moviegoers into a new timeline, “Terminator: Dark Fate” maintains a similar tone to the first two films. The actioner is stark and bleak, but an air of hope hangs overhead. The movie recycles some of the franchise’s plot points and tropes, which work for it and against it. Fans will appreciate the callbacks to past films. But the film’s storyline doesn’t take many chances and feels predictable.

Hamilton is the film’s biggest selling point. Despite nearly a three-decade gap, the actress seamlessly steps back into the shoes of the fearless Sarah, brandishing a Bazooka and a mix of weapons. Sarah’s been through a lot, and Hamilton doesn’t shy away from the long-suffering heroine’s hardness. Sarah is one of my all-time favorite movie characters, and it feels good to see Hamilton back in the role.

It’s also satisfying to see Hamilton reunite with Schwarzenegger, whose various iterations of the Terminator have tormented and aided Sarah in her yearslong quest to take down the machines. Schwarzenegger gives the movie a boost half-way through, adding some fun comic relief. Hamilton also plays well with Davis, who shines as Dani’s protector. Though Grace is part machine, Davis smartly taps into the role’s human aspects, which includes a naivete that often runs at odds with Sarah’s experience.

The buff Hamilton pulls her weight in the film’s demanding action sequences. At 63 years old, it’s Hamilton’s turn now to lead an action franchise. After all, similarly aged male actors, including Liam Neeson in the “Taken” franchise and Denzel Washington in the “Equalizer” films, have been doing it for years.

After the movie spins its wheels during its second act, “Terminator: Dark Fate” becomes recharged during its final act showdown. The exciting climactic battle stuns the senses, with fiery explosions, underwater battles, machines fighting machines and humans fighting machines. The crisp and clear sequences continually ramp up the tension.

The menacing Luna is solid as the newest Terminator model, aided by good special effects as the Rev-9’s arms transform into deadly blades, create copies of himself and absorb blows to the head. But the gold – or silver – standard for special effects in the franchise remains Robert Patrick’s murderous T-1000 in “T2.”

“Terminator: Dark Fate” spins a female-empowered story, but it falters in developing Dani, the “new” Sarah. Where the first “Terminator” film traced Sarah’s evolution from frightened victim to fighting survivor, “Dark Fate” keeps Dani’s purpose a mystery for most of the film. This makes the character difficult for audiences to get a read on. Though Ramos is likable, Dani is overshadowed by Sarah’s reintroduction and Grace’s backstory, and ends up less interesting than both characters.

The film also makes a half-hearted attempt to take on the hot-button issue of immigration at the U.S.-Mexico border. “Dark Fate” shows migrant detainees in cages, images that have stirred outrage in the real world. But then the movie backs away from the controversy. It’s a curious move for a franchise that has steered clear of political issues.

An attempt to rewire an aging franchise, “Terminator: Dark Fate” engineers a good but not great sequel. It’s a definite upgrade over “Rise of the Machines” and “Salvation.” Though having Hamilton “back” makes the film worth seeing, the overall effort may not be enough to jump-start the series. 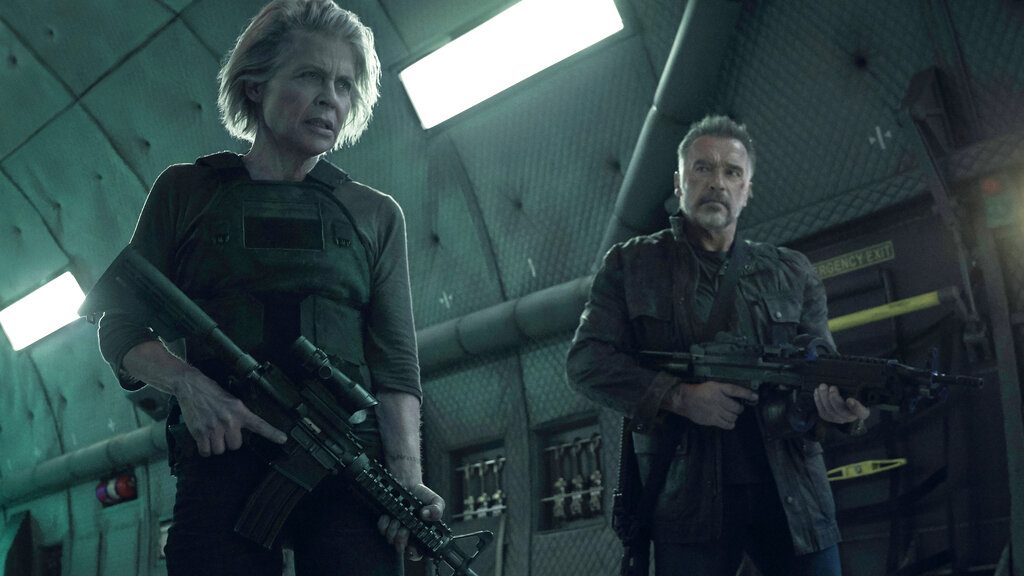 Linda Hamilton and James Cameron return for “Terminator: Dark Fate” in hopes of sparking the franchise, which has spit out mediocre and dismal films since the phenomenal “Terminator 2: Judgment Day.” Arnold Schwarzenegger is back, too, but he never left.

Hamilton returning to her roots is just awesome. She fits right back in as Sarah Connor with a scene-stealing entrance and fuels the film the rest of the way. Schwarzenegger also thrives again, and helps bring some much-needed comedy to a mostly dire film. Mackenzie Davis (Grace) added another layer to her acting ability in “Terminator: Dark Fate.” She has been solid in her young career, but now she proved she could be an action star. Davis absolutely looked the part and didn’t shy away from the action sequences. She went at them with a ferocity that makes it clear she’s a force to be reckoned with. This movie needed a strong character to go toe-to-toe with the great Hamilton, while maintaining her humanity. She nailed it.

Everyone else isn’t so memorable. Natalia Reyes (Dani Ramos) plays the character who needs protection. The film doesn’t do much to build her character because it has to balance her story with Hamilton’s story, Davis’ story and Schwarzenegger’s story. It’s not the actress’ fault the film made her more of a plot device. Gabriel Luna plays the Rev-9 Terminator (aka the bad Terminator) and he doesn’t have much of an impact. Obviously, he is a robot, but Robert Patrick proves memorable in “Terminator 2: Judgment Day.” Not sure why Luna isn’t. His Terminator design is cool. His liquid metal form could separate from his exoskeleton, creating two Terminators. However, it wasn’t used in many creative ways.

The action is very good, especially with what the editors and director Tim Miller, who has experience directing 2016’s “Deadpool,” had to work with. The movie opens with an incredible CGI scene, but some sequences that involve Luna’s Terminator have cartoonish CGI. This was evident in the trailer. The finished product looks a lot better. While the cartoon movements definitely slip through from time to time, it could have been a catastrophe. The fact the film’s team made some good-looking and entertaining action sequences is pretty impressive.

The story is really where the film falters. Cameron did return as a writer and it shows … for all the wrong reasons. Cameron wrote and directed the only two good movies in the franchise (“The Terminator” and “Terminator 2: Judgment Day”). Although Cameron is not the only writer credited on “Terminator: Dark Fate,” the sixth installment is essentially the same movie as “Terminator 2: Judgment Day.” As a result the film is predictable. At this point, most of the audience knows the lore of the franchise, but some of the characters don’t even know the basics. That is always a bad thing. Now, the film has to take time to tell the characters what the audience already knows. It holds the movie up in multiple scenes. On top of knowing the lore, the audience knows Sarah Connor. Now, she has to explain who she is. Again, the audience already knows.

Also, “Terminator: Dark Fate” teases a political commentary about the U.S.-Mexico border, which would be strange for a Terminator film to tackle. However, it doesn’t go anywhere, so it ends up more so confusing as to why it was in the film. It also tries to hold back information so there is a twist toward the end, but the so-called twist can be seen from a mile away.

The trailer for “Terminator: Dark Fate” also messes with the movie a little. It spoils a character interaction the film teases. Yet another piece of the plot the audience already knows.