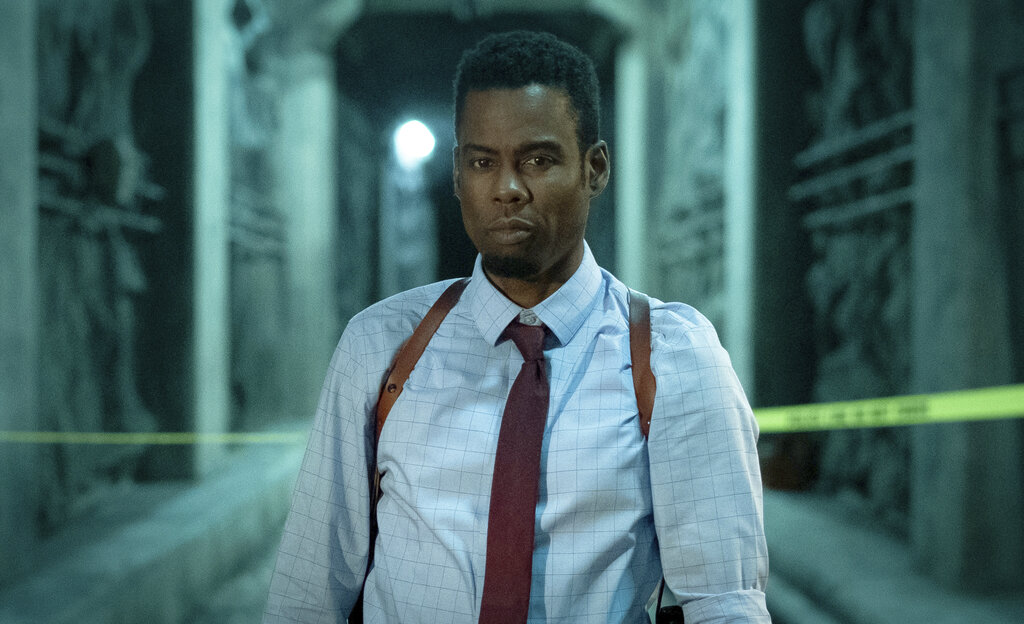 Review: “Spiral: From the Book of Saw”

Coming out every Halloween, the films became one of the most successful horror franchises of all time. Relying on low budgets with lesser-known actors, the eight films in the franchise grossed a staggering $976 million at the global box office. A reboot of the series, 2017’s “Jigsaw,” still didn’t entice me to see what I was missing. But “Spiral: From the Book of Saw” did.

The “Saw” offshoot boasts an A-list cast with Chris Rock and Samuel L. Jackson and promised a new spin on the franchise. So finally, I faced my fear and dived into the series. I watched the previous eight films in less than a week. Yes, the gore was gratuitous. But the series’ overarching narrative about serial killer Jigsaw (Tobin Bell) and his quest to test those who he didn’t think appreciated life was intriguing, even as the quality of the films dwindled over time.

After knocking off every “Saw” film, was I ready for “Spiral”? Yes, I was. But it turns out that I overprepared.

While “Spiral” seeks to sharpen the long-running franchise’s blade, it lacks teeth. The ninth film connects only loosely to the movies before it, which shines the detective flashlight on its biggest problem. “Spiral” tries to be a police procedural and a “Saw” movie at the same time, but it doesn’t entirely succeed as either. Despite a game cast and a promising concept, “Spiral” doesn’t feel like a “Saw” film. It’s uncertain if the film is meant to appeal to longtime fans or court brand new ones.

The film follows Rock’s Detective Zeke Banks, the only good cop on a corrupt police force. Living in the shadow of his father, beloved former chief Marcus Banks (Jackson), Zeke has established a different reputation for himself. Having turned in his fellow officers for their misdeeds, Zeke is labeled a rat. He is unable to trust anyone in the department, including his new partner, the fresh-faced, idealistic William Schenk (Max Minghella).

The two are put to the test when a Jigsaw copycat starts targeting cops. One by one, officers become ensnared in death traps reminiscent of those built by the deceased John Kramer. As the bodies add up, Zeke is under pressure to figure out the killer before more people close to him pay the price.

The top-tier casting gives “Spiral” the best acting in the “Saw” franchise in years. Known for his standup comedy, Rock convincingly plays against type as a horror movie lead. He taps into Zeke’s bitterness as the weary detective is used to fending for himself in a department devoid of morals. You can hear the distaste come out of Rock’s mouth as he defends his actions.

The actor shares a nice camaraderie with Minghella as the jaded veteran reluctantly teams up with the eager rookie. Their humorous back-and-forths add a needed lightness to the dark film. Jackson shines as Zeke’s dad, adding fun to some of his scenes and legitimacy for the franchise in others. But the two actors don’t share the screen as much as they could have.

For a series known for its small budgets, “Spiral” features a high production value, which makes it the best-looking of all the “Saw” films. The sequel brings back Darren Lynn Bousman, who directed “Saw II,” “III” and “IV” and lends his experience behind the camera here. The police station’s earthy brown tones give way to the sickly greens that bathed the franchise.

The movie starts off strong with its first trap. An undercover cop is hung by his tongue in a wretched device as a subway train approaches. That’s just the first of its gruesome death machines, which include one that rips off fingers and another involving hardening wax. The film’s creative traps satisfy the quotient of gross-ness to which “Saw” fans have become accustomed. It’s during the traps that “Spiral” feels most like a “Saw” movie.

However, the traps take a backseat to the murder mystery. “Spiral” exchanges the pulpiness of past entries for a realistic grittiness. The film channels “Seven” as the killer adds a new party trick to his arsenal, sending packages with disturbing contents to Zeke (you can guess what’s in them). But each package sends the police to a new place, making the plot feel like a series of location changes. This breaks up any tension “Spiral” tries to build in between the trap sequences.

For a film that prioritizes its police investigation over its horror aspect, the mystery itself is nowhere near as intricate as in previous films. In past entries, the franchise took pains to spin a convoluted mystery that resulted in a stunning twist – even multiple twists – at the end. “Spiral” pushes back against that series convention, laying out a cut-and-dry story. This hurts the plotting of the mystery. It’s actually kind of obvious who the killer is, so by the time the “twist” is revealed, it comes across as a confirmation and not a shock. The killer’s connection to Jigsaw is tenuous, which may disappoint longtime fans.

The film deserves props for trying to catapult the franchise into social relevance. The franchise has addressed corruption in law enforcement before, but “Spiral” takes on the issue of police brutality that has dominated headlines. Its timing is remarkable considering the film was postponed a year due to the pandemic. The killer wears a pig mask – a mainstay throughout the series – but gives it a new meaning as the new “game” exclusively targets dirty cops. Instead of Jigsaw’s famed Billy the puppet, the killer uses a pig puppet dressed in a police uniform.

Though “Spiral” seeks to break out of its horror comfort zone, the film still doesn’t push the issue of race as much as it could. The movie features two Black stars – Rock and Jackson – but doesn’t specifically address police treatment of minorities. It misses a prime opportunity to tackle racial injustice. Oddly enough, the franchise did a better job of addressing the nation’s flawed health care system in “Saw VI,” the only other entry that treads into social issues.

Did I need to watch all eight “Saw” films before seeing “Spiral”? The answer is no – as long as moviegoers know the gist of Jigsaw’s philosophy, you can jump right into “Spiral.” But the film may favor new fans over loyal ones. The latest attempt at the franchise’s revival reveals itself to be a middling entry in the series.

Sure, it’s better than some of the other sequels. But it only feels like a “Saw” movie during the torture bits as the film prefers to focus on the plodding police investigation.

“Spiral” aspires to be more. The acting of Rock, Jackson and Minghella boosts the proceedings, and its willingness to tackle police brutality aims to make the franchise more socially relevant. But ultimately, “Spiral” is a few pieces short of a satisfying puzzle. 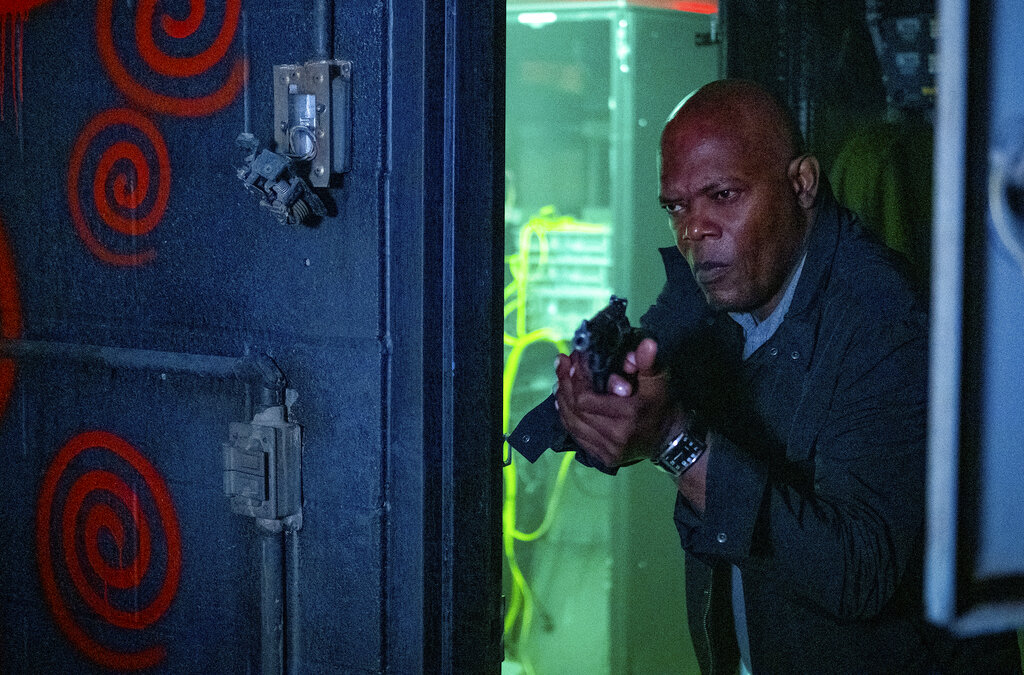 Samuel L. Jackson in a scene from “Spiral: From the Book of Saw.” (Brooke Palmer/Lionsgate via AP)

The “Saw” franchise is back again after declaring the seventh film “The Final Chapter,” and returning with an eighth film, the underwhelming “Jigsaw.” This ninth installment, “Spiral,” claims to be “From the Book of Saw.” That means “Spiral” is simultaneously a spinoff and a sequel. It attempts to give a fresh take on a 17-year-old concept. How would that blend? Better than expected, but not without its flaws.

“Saw” doesn’t traditionally bring big stars or good actors into its franchise. Danny Glover, Donnie Wahlberg and Cary Elwes come to mind, but they starred mostly in the first few. Tobin Bell became a star through his great performance as Jigsaw. “Spiral” brought the gravitas of Chris Rock in the leading role as Detective Zeke Banks and Samuel L. Jackson as his father, former police chief Marcus Banks. Add character actor Max Minghella (William Schenk) and from the start the film feels different. And it is to a certain extent.

All “Saw” films have a plot where a person or people are in the midst of a “game” orchestrated by Jigsaw or one of his proteges, while on the outside there is an investigation into the game and/or the person or people within the game. “Spiral” is the only film that doesn’t have a long game. The film follows the investigation into a series of short games, which usually serve as the opener to “Saw” movies. This story follows Rock’s character and delves into his backstory.

Zeke Banks is a detective who turned in a corrupt cop and has paid for it ever since. Seen as a rat by most of the department, he is now a veteran of the force about to be caught up in the biggest case of his life. An apparent Jigsaw copycat targeted his best friend in the department, and he feels obligated to take on the case.

The film serves as a social commentary as corruption is rampant among the department that clearly needs reform, but torture and death is not the way to do it. While Zeke Banks’ obsession with the case increases, he faces his own obstacles with morality. The commentary is effective without beating the audience over the head with it.

The script is solid throughout, especially for a “Saw” movie, as the film opens with a hilarious discussion about “Forrest Gump” and ends with a twist I didn’t see coming. Rock shines in the leading role, as he brings his serious acting strength and blends it with the over-the-top emotional reactions that go hand-in-hand with “Saw” movies. In a small role, Jackson brings more clout with his usual performance. I haven’t seen Minghella since “The Social Network,” but he is excellent as Zeke Banks’ partner.

Also, it allows the audience to draw its own conclusions about the difficulty of the games. The film doesn’t come out and tell the viewers why they are so difficult. It respected the audience and tried to be smart.

I have a lot of praise for this film, but the biggest thing holding it back is that it’s a “Saw” movie. By being a part of a nine-film franchise, “Spiral” has to hit beats. It needs to end with a twist, it needs grotesque traps, it needs the great “Saw” score. “Spiral” is a film that tries to be more, but can’t get past the boundaries set by the franchise. I say it time and time again. Movies that have more than one focus can’t rise to the greatness for which they strive. “Spiral” is simultaneously a detective movie and a “Saw” film, when it had the opportunity to make a great detective movie and definitely one of the best “Saw” films. It compares closest to “Saw VI,” which tackled the health care system but put the health insurance executive in the long game. The focus was on the game and the “Saw” concept. That made for a good “Saw” movie.

“Spiral” has a lot to like about it. It’s smart, well-acted and incredibly watchable. I’ll see this again and enjoy it. However, it doesn’t become much more than a decent movie, because it tries to be two things at once.