We all have our daily routines, punctuated by the sounds that make up the soundtrack of our lives. Maybe your cellphone alarm wakes you up with a track from your Spotify playlist. Maybe you talk to your loved ones as you make a cup of coffee while your coffeemaker gurgles away.

But what if all that was gone in an instant? What if you could no longer hear the familiar and comforting noises around you?

The powerful drama “Sound of Metal” looks at the sudden onset of deafness and how it can forever change a life. Streaming on Amazon Prime, the riveting film offers a sensitive look at the personal struggles involved and the resilience of the deaf community. With its innovative use of sound design, a raw leading performance by Riz Ahmed and eye-opening entry into deaf culture, “Sound of Metal” impresses as one of last year’s best films.

The journey of self-discovery follows Ruben (Ahmed), a drummer on tour as part of a metal duo with his longtime girlfriend, Lou (Olivia Cooke). When Ruben starts losing his hearing, the musician continues to perform despite his doctor’s warnings. After Lou discovers Ruben’s hearing is deteriorating rapidly, she finds him a place that helps recovering drug addicts cope with their deafness.

At the community house, Ruben is faced with the uncertainty of his career, relationship and sobriety as he considers a potential solution – cochlear implants. As he learns how to adapt to his changing circumstance, Ruben must choose between his new life and his old one.

“Sound of Metal” marks the stunning feature film debut of director Darius Marder, who also co-wrote the screenplay. The immersive drama lets us into Ruben’s world through its extraordinary use of sound and silence. The film often shifts perspective from what Ruben hears to what the world around him sounds like, letting us hear for ourselves the decline in his hearing. The unique sound design should be nominated for best sound at this year’s Academy Awards.

As the film opens, we experience the loudness of Ruben’s routine – performing on stage, waking up next to Lou, making coffee. When his hearing goes, the silence is sudden and startling. As viewers, we can feel Ruben’s panic, confusion and frustration as the noises around him become muffled and distorted. In another scene, Ruben hears nothing as he eats dinner with the other residents at the facility. When the perspective shifts, we can hear how noisy the residents actually are. “Sound of Metal” finds the right balance between noise and stillness.

Ahmed delivers a star-making turn as the conflicted Ruben. The talented “Rogue One” and “Venom” actor’s performance runs the gamut of emotions. With his wide eyes and telling expressions, Ahmed shows fear, despair, hope and resignation, all the while eliciting sympathy from viewers. As his hearing degenerates, the drummer is worried about losing his job and Lou – everything he has known for the past four years. The film also adds the complex layer of Ruben being an addict as his initial helplessness threatens his recovery.

As the drummer struggles between learning to be deaf and wanting to find a fix for it, Ahmed capably carries Ruben’s dilemma on his shoulders. The actor not only learned how to play the drums for the role, but also American Sign Language as his character reluctantly embraces using it. Ahmed puts himself in the race for the best actor at the Oscars with a portrayal that beautifully comes full circle. The ending of “Sound of Metal” is nothing short of perfect for the story it tells.

The compelling drama also lets us inside the deaf community. “Sound of Metal” shows that deafness is not a disability. From children to adults, deaf individuals can and do lead full lives. As part of his education, Ruben learns right alongside a class of hard-of-hearing children at a local school. The drummer evolves from shakily making hand gestures at the students to teaching them how to play the drums, feeling the rhythm through the drumsticks. Despite the obstacles, Ruben ingratiates himself to the deaf community and finds a place for himself in it.

In addition to Ahmed, “Sound of Metal” features a standout supporting performance by Cooke as his devoted girlfriend. The self-sacrificing Lou recognizes right away that Ruben needs help, even if it means the two must spend time apart. We learn more about Lou and her own struggles in a nuanced performance that could put Cooke on the Oscars’ radar. Paul Raci also is memorable as the kind but tough Joe, the Vietnam War veteran who runs the community house.

The film has a few minor script issues that I would consider nitpicks. When Ruben ultimately decides what to do about his hearing loss, it comes across like he didn’t have all of the information he needed beforehand. While the inclusion of the information is meant to serve as exposition for the audience, the timing of it felt odd and took me out of the movie a bit.

When my Spotify playlist woke me up this morning, I thought about “Sound of Metal.” Instead of wishing I was still asleep, I listened to my Keurig as it started up and dripped coffee into my mug. The film stayed with me long after the credits rolled.

With its thoughtful and compassionate look at deafness, the accessible drama lifts the veil on the deaf community. The tremendous film deserves to be nominated across several categories at the Oscars, including best sound, best actor and best picture. Let “Sound of Metal” into your life, and you’ll come away with a deep appreciation for the film – as well as the soundtrack of your own life. 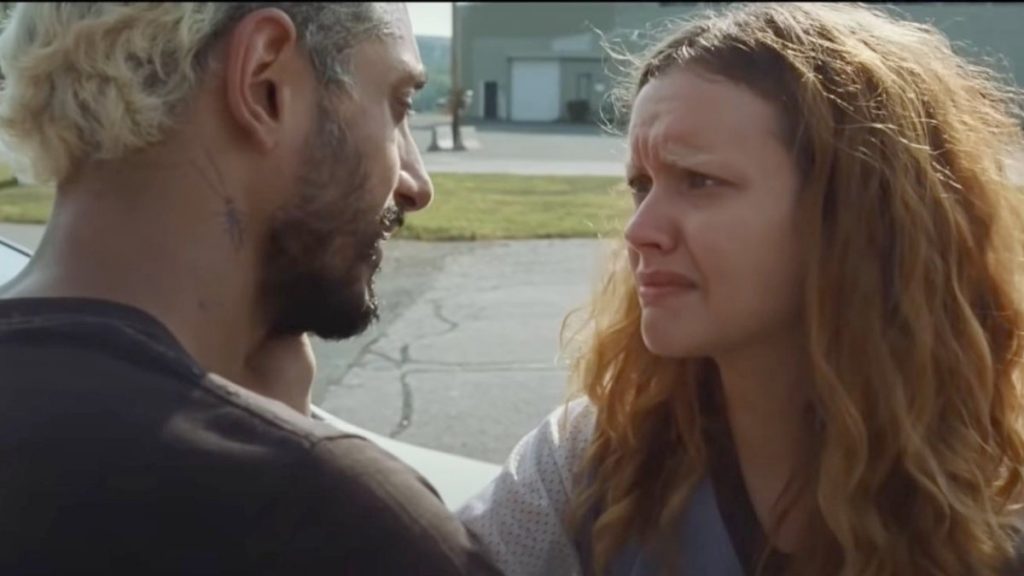 Riz Ahmed and Olivia Cooke star in “Sound of Metal.”

Riz Ahmed showed his breakout potential in 2014’s “Nightcrawler,” 2016’s HBO miniseries “The Night Of” and 2016’s “Rogue One: A Star Wars Story.” He finally earned the opportunity in “Sound of Metal,” and powered the Amazon Prime film with an Oscar-worthy performance. Ahmed portrays Ruben, a heavy-metal drummer whose hearing rapidly deteriorates. He quickly needs to adjust to life as a deaf person, while seeking treatment so he doesn’t succumb to his former addiction. Ahmed displays his range as Ruben’s hearing deteriorates and the character evolves and devolves throughout the film. His performance resonates as he balances Ruben’s heart with his addictive personality. Ahmed knew when to ramp up his voice without going over the top, while capturing the beautiful moments of subtlety. The audience understands how he feels just from body language and facial expressions. His believable performance drives the film and should earn him at least an Oscar nomination.

The supporting cast also elevates the film, led by Olivia Cooke (Ruben’s girlfriend Lou) and Paul Raci (Joe). Cooke builds a strong chemistry with Ahmed and communicates her emotion with just her face. Though the film doesn’t center on Lou, she has her own transformation that Cooke captures beautifully. She shares emotionally resonant scenes with Ahmed that go to the heart of the movie. Raci shines as Ruben’s deaf mentor. Some of the film’s most engaging scenes come when Raci goes toe-to-toe with Ahmed. The two battle as Joe wants Ruben to become an integral part of the deaf community, and Ruben just wants to get his hearing back. Their final talk is one of the best scenes in the film.

“The Walking Dead” actress Lauren Ridloff (Diane), Mathieu Amairic (Richard Berger) and Chelsea Lee (Jenn) make the most of limited screen time and find a way to impact the film.

The sound design proves vital to the film and is almost a character in and of itself. It allows the audience to hear what Ruben hears. The muted tones make the audience feel for Ruben immediately. It also bounces back and forth between the audience’s normal hearing and Ruben’s hearing seamlessly. Later, the film establishes another tone that breaks the heart of the audience simply with sound. Based on its importance to the movie, “Sound of Metal” should earn a nomination in the sound category.

Writer/director Darius Marder (a writer for one of my favorite movies “The Place Beyond the Pines”) captures some gorgeous sequences with intelligent filmmaking. He also respects the intelligence of the audience as he doesn’t have to spell out scenes’ messages. In a great moment, Ruben is fixing a roof at the treatment center and Joe gets mad because Ruben is there to fix himself, not deflect and try to fix other things. Marder also puts the audience in Ruben’s shoes. When Ruben first arrives at the deaf community, he doesn’t know sign language and therefore doesn’t understand what anybody is saying. Marder doesn’t add subtitles for the audience until Ruben learns sign language. Some of the viewers knew sign language I’m sure, but for people who don’t Marder created engaging scenes where a lot of the audience just saw hand motions. His subtle choices and scene construction elevate the film. Ahmed shares a short scene with one of the deaf children in the community. Ahmed sits at the bottom of a metal slide, while the boy sits at the top. They both start to beat on the metal slide and eventually the boy tries to imitate Ahmed’s rhythm. It’s a simple and beautiful scene. Marder adds those types of sequences throughout the film. He also has the guts to take the film in a unique direction at the end instead of tying it up in a bow.

My only nitpick comes when Ruben makes a rapid turn to buying into the deaf community. It happens too quickly. He doesn’t want to be there and then 30 seconds later, he buys in completely. The speed is not believable.

“Sound of Metal” creates an experience unique to audiences with expert sound design, acting, writing and directing. It engages the audience, allowing the viewers to hear what Ruben hears and the emotional toll that comes with rapid hearing loss. This film will earn a few Oscar nominations, and studios will look to make Ahmed a leading man.