Have you ever had a kitchen sink brownie? The baker throws whatever ingredients they have in the kitchen – from almonds to chocolate chips, from pecans to Oreos, from pretzels to potato chips – into the brownie recipe. Though the ingredients are scattered, they add up to a satisfying whole.

Now that I’ve made you hungry, sit down and grab your new favorite dessert before you watch “Malignant,” director James Wan’s return to the horror genre. The wild and polarizing film, playing in theaters and streaming on HBO Max, is the kitchen sink brownie of horror movies.

Pulling from a variety of influences, “Malignant” starts off as one kind of horror flick before revealing itself to be another. The film bridges classic and modern horror, and it calls back to Wan’s best films. Yet under the director’s firm command, “Malignant” somehow works. It’s scary and suspenseful, it’s campy and fun, and it’s downright bonkers – and all the better for it.

Annabelle Wallis makes a willing scream queen as Madison, a traumatized woman plagued by visions of brutal murders. When she discovers the killings are occurring in real life, Madison is determined to find out her connection to the mysterious killer with the help of her sister Sydney (Maddie Hasson) and Detective Kekoa Shaw (George Young).

Wan initially pulls out a familiar recipe for the sharp-looking “Malignant.” The film starts out as a haunted house movie, a subgenre Wan knows well from his successful “The Conjuring” franchise. The nightmarish atmosphere features an ominous house with fog swirling overhead, a Gothic touch that looks straight out of a Hammer Horror film from the 1950s.

In “Malignant,” the director’s first horror film since 2016’s “The Conjuring 2,” Wan steadily builds tension with his dynamic camerawork, accentuated by the contrast of light and shadow. In one scene, the camera shakily follows Madison up the stairs as she runs away from an unseen attacker. In an impressive sequence, an overhead tracking shot shows a frightened Madison frantically running from room to room as her home is increasingly threatened. But Wan lets the audience know this isn’t a “Conjuring” film.

During its second act, “Malignant” adds more ingredients by embracing another subgenre: the Italian giallo. You know you’re watching a giallo when a black-gloved killer gleefully commits murder through stylized violence. In “Malignant,” Wan shows the killer putting on the gloves. Some scenes are reminiscent of “Saw,” the 2004 thriller that put Wan on the map. But instead of Jigsaw, “Malignant” gives us Gabriel (voiced by Ray Chase), a long-haired, parkour-fighting villain who’s as terrifying as he is quick – and destined to become a horror icon.

As the film pivots from haunted house film to giallo, “Malignant” moves from serious to shocking. The kills are gruesome and haunting, taking on the primary red and blue hues favored by the father of giallo himself, Dario Argento. The unsettling imagery grows redder as the blood starts flowing. When Madison witnesses Gabriel’s murders, her surroundings melt away in stunning CGI. The striking technique makes us question Madison’s reliability as a narrator, asking us to decide what’s real and what’s not.

The crazy third-act twist serves up the key ingredient for “Malignant” to go berserk in its final act – and it’s glorious. “Malignant” shows that Wan in fact ripped up the recipe, subverting the conventions we’ve come to expect in horror films. I guessed part of the twist, but I nearly fell off my couch when the film revealed it. The jaw-dropping moment provides the icing on the kitchen sink brownie. Not only does the twist make sense, but it recontextualizes the first two acts – and makes them better. This speaks to the clever screenplay penned by Akela Cooper, based on a story by Wan, Cooper and Ingrid Bisu.

The campiness hinted at throughout the film rises to the top during the finale’s relentlessly violent and entertaining showdown. Wan proved he could direct action in “Furious 7” and “Aquaman,” and he cements that here. “The Matrix”-like sequence is viscerally thrilling. But some of the CGI makes it look like a video game, which can be distracting.

Is it surprising that “Malignant” works as well as it does? Yes, but even brownies can be underbaked. The acting takes a backseat to the film’s scares and wackiness. Wallis gives the film’s best performance, and I liked Hasson’s spunk as Madison’s loyal sister. But the duo is surrounded by some hammy acting that could take viewers out of the movie.

A compelling villain, Gabriel not only knows martial arts, but can control electricity. As intriguing as these abilities are, the film never explains why he has them or how he got them. Late in the movie, a character offers an apology that comes out of nowhere. It’s a weird choice that tries to get the audience’s sympathy too late in the film.

One of the most unique movies we’ve reviewed for Take 2, “Malignant” is dividing horror fans. But I enjoyed this kitchen sink brownie. Wan delivers an entertaining mishmash of a haunted house flick, provocative giallo and campy thriller that equals more than the sum of its parts. “Malignant” terrifies, surprises and thrills, reveling in its own ridiculousness. Your mileage may vary on this one. But Wan is a franchise-maker, and I’m ready for a second brownie from the “Malignant” cookbook. 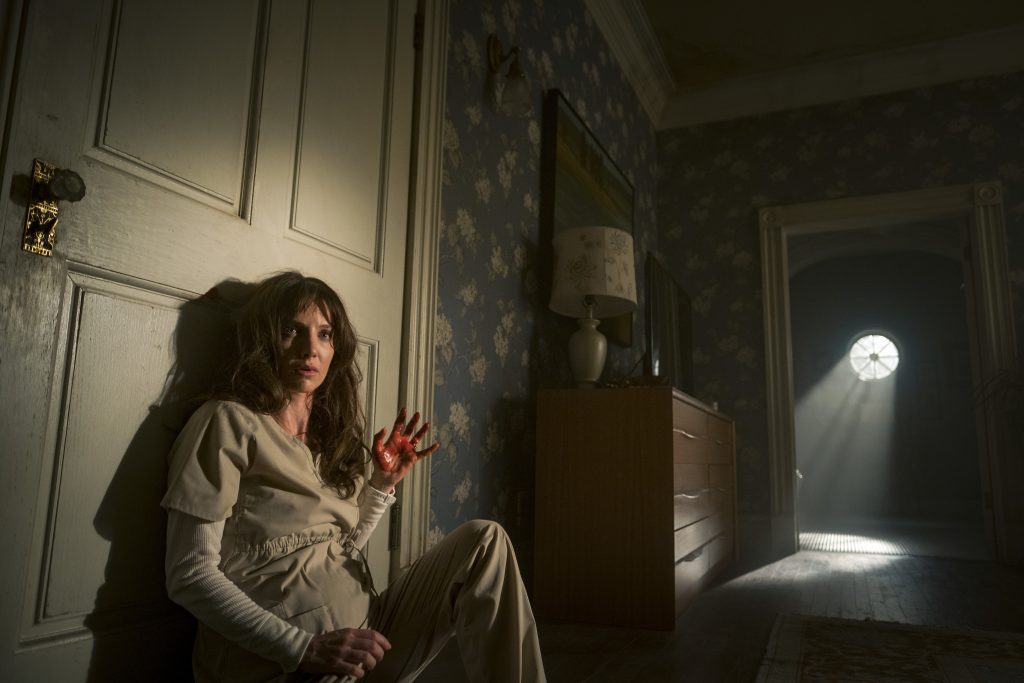 While I don’t usually enjoy horror films, James Wan is one of the most influential directors in the genre today. He kicked off iconic horror franchises, such as “Saw,” “Insidious” and “The Conjuring” and bolstered his resume with blockbusters “Furious 7” and “Aquaman.” While often immersed in the horror genre, Wan attacks each horror franchise differently, making each film unique even though the director doesn’t change. “Malignant” proves a combination of every film he’s worked on, and the result is a mixed bag.

The polarizing film seems to divide fans, and I understand why. The trailer is a little misleading, making “Malignant” seem like it would be a “Conjuring” or “Insidious” kind of movie. That’s not the case. I also understand the marketing because I watched it and I can’t tell you how to sell it. It’s three movies in one.

“Malignant” starts with an over-the-top, bloody flashback that includes bad and/or campy acting. Then it transitions into a “Saw” theme (“Hello Zepp”) type song called “When Your Walls Fall” by Celldweller over the opening credits. This sets the tone for a campy, violent, action horror film, not the supernatural being movie the trailer sold. So where does the film go from there? Obviously a supernatural being film, similar to “Insidious” and “The Conjuring,” with a being who is haunting main character Madison Mitchell (Annabelle Wallis).

From there, it transitions to a mystery with detectives trying to figure out murders that Madison can somehow see. This follows the pattern of a “Saw” film. Then, it’s an action film, which Wan has experience in with “Furious 7” and “Aquaman.” I struggle with films that lose focus and don’t know what they are. Wan is too talented to make that mistake, so this is exactly what he wanted. He’s trying to subvert expectations. Did he accomplish what he set out to do? YES! And it’s just a matter of how the audience feels about that. It seems to have pushed fans one way or the other. They either love it or hate it. I’m very in the middle.

No matter how audiences feel about the film, they can’t deny Wan’s talent. There’s some incredible sequences with great and varied camera work. At one point he has an effective overhead shot that follows Madison throughout her house. He follows characters with crisp, intense shots that put the audience right in the action. In the middle of the film, Wan constructs an incredible chase sequence and adds a beautifully choreographed action set piece later in the movie. He also knows how to build tension and frightening imagery.

The problem is some of this movie is trying to be campy and funny. Some of it aims at true horror and it just doesn’t blend properly. Wallis is decent, but most of the acting is bad. Unless you view the film as more campy, then the acting is more campy than bad. The villain, Gabriel (voiced by Ray Chase), has supernatural abilities like invisibility and teleportation. Then the audience finds out he’s a physical being and he no longer has those powers. He is instead a parkour and martial arts expert. His abilities make zero sense and are never really explained. Although the film has a good look, the special effects are a little iffy. When Madison sees Gabriel’s murders, the room around her transitions to where he is and it looks very low budget. Also, the CGI of some of Gabriel’s movements is a little cheesy.

No matter how you feel about the first two acts, the third act makes or breaks the film. I thought I knew where the film was going, despite numerous reviews and word of mouth telling me the twist and finale are bonkers. Well, it turns out I didn’t. It is a very unique ending as Wan is definitely going for it.

“Malignant” doesn’t work for me as it proves more of a mess than a good thing. Yet, Wan’s filmmaking ability is still impressive, the film kept me engaged throughout and the third act entertains if nothing else. It’s so polarizing and so well-crafted that this may be one of the only movies I recommend with the score I give it below. Wan gives a hell of an effort to create something different that surprises the audience. You have to respect the attempt, even if you think it didn’t come together.

Review: "The Eyes of Tammy Faye"
Review: "Shang-Chi and the Legend of the Ten Rings"
Review: "Candyman"
Review: "Reminiscence"