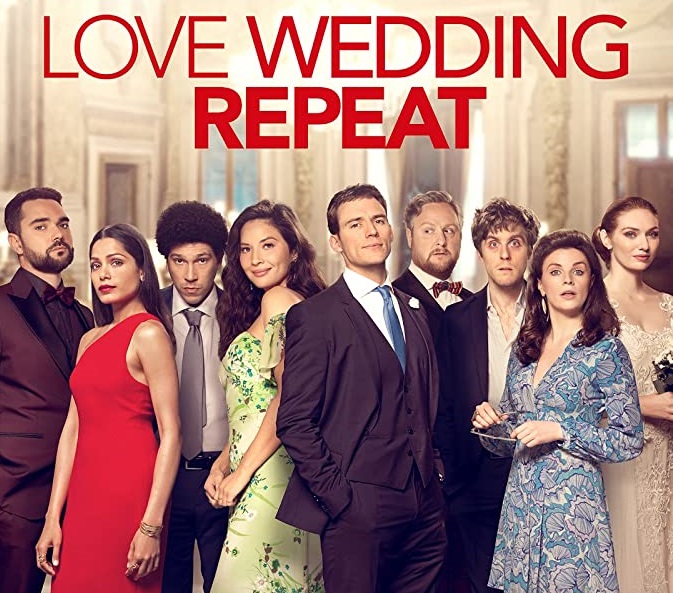 When I looked at the title and watched the trailer for Netflix’s “Love Wedding Repeat,” I had a certain level of expectation. It was clearly a romantic comedy, which didn’t look like it separated itself from the genre with its jokes. However, it teased a “Groundhog Day,” “Edge of Tomorrow” (aka “Live Die Repeat”), “Vantage Point” or “Happy Death Day” gimmick. Those movies restarted the day or an event multiple times giving the audience different points of view or giving the characters more knowledge to try to conquer the day. All these films worked so I was excited to see what a rom com could do with this concept. Maybe it would take the concept and do something smart with it or something unexpected. Maybe it would use the gimmick to ramp up the humor. Either option would have been fine with me. What did the creators do with the concept?

I spent the first hour of the movie wondering when “Love Wedding Repeat” would cut back and restart the wedding. Finally, the film rewinds. This movie is an hour and 40 minutes long. I kid you not. The first rewind happens at 59 minutes and 51 seconds. Almost an hour into the film. To explain where “Love, Wedding, Repeat” rewinds to, I have to explain the premise of the film. Or try to at least.

The basic conflict of the film is Hayley (Eleanor Tomlinson) is getting married and she’s trying to prevent wedding crasher Marc (Jack Farthing), who Hayley has a past with, from ruining the wedding. She employs the help of her brother Jack (Sam Claflin) to stop Marc. Hayley comes up with the idea to put a sedative into Marc’s champagne glass and asks Jack to make it happen. He does it before anyone arrives at the table. However, kids come along and change the seating arrangements, leaving maid of honor and Jack’s best friend Bryan (Joel Fry) to drink from the drugged glass of champagne. Why is he the maid of honor? For the sake of a lame joke that keeps getting shoved down our faces. That’s a theme for this movie, but we’ll get to that later. Also, midway through the film Bryan becomes Jack’s best friend. Were they always best friends? I guess. Did it seem like it? No. But anyway, back to the point.

This moment of Jack pouring the sedative into the glass and then the kids moving the names around is the starting point after the rewind. But wait … that’s not the main conflict of the film. So why place so much importance on that scene? Because it provides a nice point for its “Groundhog Day” premise. Well, the film rewinds and presses play to that scene once. ONCE! OK, it does have a montage and a few scenes during the end credits. But it was only played out one more time.

Let’s do our best to try to find the main conflict of the film. I think I’ve got it. Although “Love Wedding Repeat” places importance on the sedative scene, Jack is the main character. He kicks off the film with Dina (Olivia Munn) and lets the opportunity to kiss her slip away. However, he receives a second chance three years later as Dina attends her friend Hayley’s wedding. As Jack tries to talk with Dina, people keep getting in the way. The duo trying to make up for lost time and form a relationship is the main plot. It amazed me how much time they spent away from that plot line.

What character does the film decide to explore and give an arc? That would be Sidney (Tim Key). Let’s talk about Sidney. He’ll easily be one of the most annoying characters of 2020. He’s wearing a kilt and he’s not Scottish. Why do I say that? Because it’s mentioned about five times. Also, with the kilt comes inappropriate and disgusting jokes. Sidney is also a terrible person who only cares about himself to the point where it’s legitimately frustrating. Someone would tell him to shut up in a real situation at the very least, but it never happens. Instead his jokes are rammed down our throats for what seems like an eternity. That is a huge problem throughout the film. Each character has one-note jokes. If they don’t land, that doesn’t mean they will stop. Also, the comedic timing in the beginning of the film is just off. There’s a lot of awkward pauses that were maybe put there so the audience could laugh, but we weren’t even chuckling. There’s one bit that plays and it’s when Bryan (in the first scenario) and Jack (in the second) drink from the glass with the sedative. I’ll admit, I was laughing quite a bit.

At the hour and 10 minute mark, “Love Wedding Repeat” springs three heartfelt moments on us in a seven-minute span. These come out of nowhere. They may have worked in better films, but in this one they are far from earned. When I broke the movie down logically, it was much worse. These heartfelt moments may happen more than an hour into the film, but remember the day rewinded an hour into the movie. So, these heartfelt moments weren’t even built properly. They were created in 10 to 17 minutes of screen time. Let me add that no character knows the event resets. So nobody has more knowledge. It’s just different scenarios.

I did enjoy Claflin and Munn. When they have a chance to display their chemistry, they deliver. It reached a point when I started pretending Claflin and Munn were two good actors trying to figure a way out of this bad film and it made it more entertaining for me. I also like Fry and Aisling Bea (Rebecca). They are able to supply the film with a few much-needed laughs, but it wasn’t enough to salvage the film.

“Love Wedding Repeat” doesn’t even get out of the starting blocks as it refuses to fully utilize the concept it sold to the audience. On top of that, it’s a film with absolutely no focus that did little to clean up the mess it created. 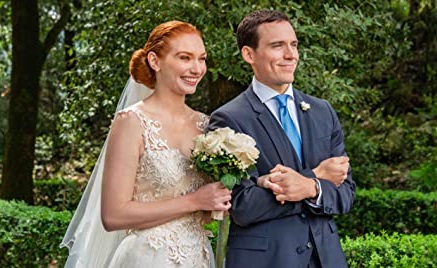 With its romantic setting, British cast and fantasy concept, “Love Wedding Repeat” tries to marry the traditional romantic comedy with a “Groundhog Day” premise, promising different scenarios of the same wedding. But despite the lovely British accents, light-hearted laughs and a few heartfelt moments, the Netflix original fails at both genres. The movie cheats on its own gimmick, breaking its promise to viewers.
The ensemble comedy brings together a largely British cast at a scenic mansion in Rome. Hayley (Eleanor Tomlinson) is getting married, with her devoted brother Jack (Sam Claflin) and eccentric best friend Bryan (Joel Fry) by her side. Jack is hoping to reconnect with Hayley’s friend Dina (Olivia Munn), a war journalist with whom he shared sparks before chance interceded.
Hayley’s dreams of happiness are threatened when Marc (Jack Farthing), a wildcard figure from her past, crashes the wedding. To keep Mark from ruining her wedding day, Hayley directs Jack to put tranquilizer drops in Marc’s champagne glass. The drastic move causes the rest of the wedding to play out in different ways.
Enamored with how chance can affect its characters’ lives, “Love Wedding Repeat” doesn’t fully execute its own concept. The rom com sells itself on the idea that sometimes it takes a few tries to get the right outcome, in the tradition of films including “Groundhog Day,” “Happy Death Day” and “Edge of Tomorrow.” The film’s title even riffs off “Live Die Repeat,” the other name for “Edge of Tomorrow.”
But instead of presenting multiple scenarios of the same situation, “Love Wedding Repeat” presents just two scenarios of the wedding reception, with a montage of possible outcomes in between. It’s a lazy way to achieve the “repeat” part of its title. The film shows more possible scenarios during the end credits, but these scenes should have been part of the actual film. To add to the confusion, the rom com also doesn’t make it clear if its characters are even aware of the repeating loop.
The film bases its “what if” concept on a contrived premise. If the coke-snorting Marc had disrupted the wedding ceremony in real life, he would have been immediately thrown out, and we wouldn’t have a movie. But the film asks viewers to suspend disbelief so we can have a movie, going so far as to have Jack spike Marc’s glass. It’s an extreme move in order for the film to enact its gimmick.
“Love Wedding Repeat” boasts a large cast of stars well known to watchers of British films and television. But the ensemble nature of its story actually detracts from its main romance.
Jack and Dina are incredibly likable as the would-be couple seeking a second chance after missing their opportunity a few years earlier. As the caring and earnest brother of the bride, Claflin earns most of the film’s laughs. The versatile actor shows a flair for physical comedy after he unwittingly drinks the spiked champagne. But the film’s preoccupation with more annoying characters takes time away from his and Munn’s storyline.
There’s Sidney (Tim Key), a self-centered Brit wearing a kilt who does nothing but talk about himself. One of the most dislikable characters I’ve seen in a film recently, he gets a lot of screen time for no good reason. There’s also Amanda (Freida Pinto), Jack’s angry ex-girlfriend who does nothing but belittle her current boyfriend, the insecure Chaz (Allan Mustafa), who constantly talks about his inferiority complex in the bedroom. It’s perplexing why the film chooses to spotlight these side characters at the expense of a charismatic couple such as Claflin and Munn.
By the time “Love Wedding Repeat” delivers the heartwarming moments British rom coms are known for, it’s deep into the third act. And the best scene isn’t even reserved for its marquee couple. That goes to the funny Bryan – who’s either Hayley’s or Jack’s best friend, depending on what part of the movie you’re watching – and the blunt and candid Rebecca (Aisling Bea), who gradually softens. But for most viewers, the heartfelt nuggets of wisdom may come too little, too late.
What if “Love Wedding Repeat” had taken advantage of its intriguing repeat-scenario concept? We’ll never know as the half-hearted rom com breaks its commitment to its audience by not fulfilling its vows. Though good for some laughs and emotional moments, this film can ultimately be left at the altar.
2 out of 5 stars