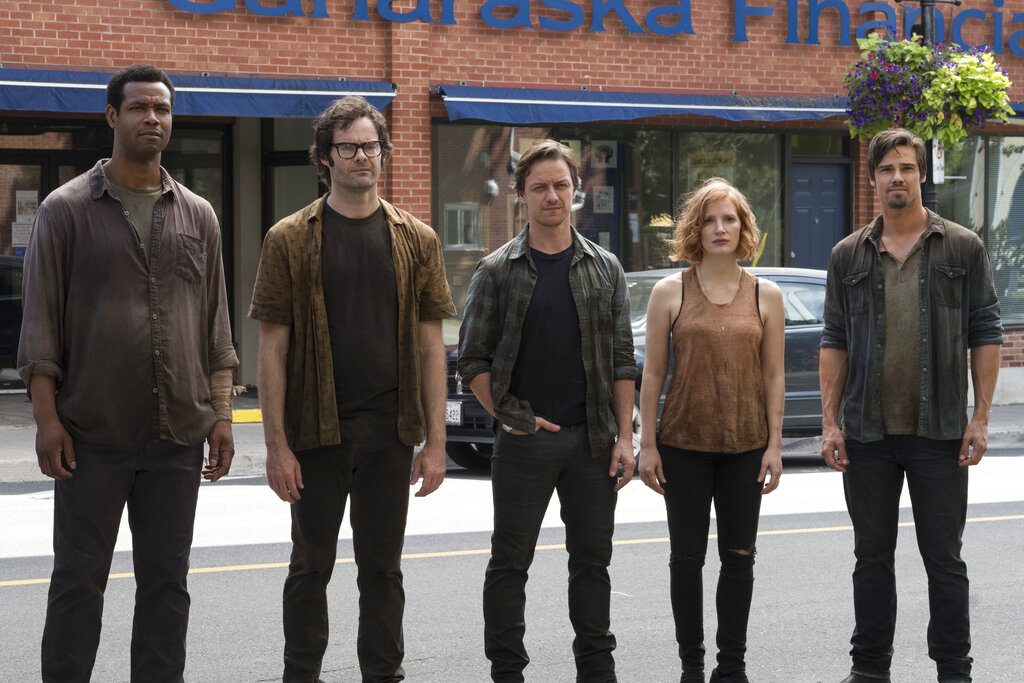 2017’s “It” was a nightmare come to life. The big-screen adaptation of Stephen King’s best-selling horror novel frightened moviegoers with the sight of a simple red balloon. The highest-grossing horror film of all time introduced audiences to an outstanding cast of young actors as the Losers Club, a group of child misfits who take on a shape-shifting demon whose monstrous evil has infiltrated their small town.

But evil doesn’t rest, and neither does a worthy sequel. The dread-inducing “It Chapter Two” summons more nightmare fuel as it brings back the Losers Club as adults to battle the sinister clown Pennywise. Successfully integrating its all-star adult cast with the first chapter’s popular child actors, “It Chapter Two” is just as masterful as its predecessor, maintaining its terror-soaked atmosphere while tackling the effects of childhood trauma.

In 1989, the Losers Club stopped Pennywise’s (Bill Skarsgard) reign of terror upon the children of Derry, Maine. Afterward, the group of friends went their separate ways. But 27 years later, the town’s kids are once again disappearing. Having stayed behind in Derry, Mike Hanlon (Isaiah Mustafa) calls on the members of the Losers Club to reunite and defeat Pennywise once and for all.

The rest of the Losers – Beverly Marsh (Jessica Chastain), Bill Denbrough (James McAvoy), Richie Tozier (Bill Hader), Ben Hanscom (Jay Ryan), Eddie Kaspbrak (James Ransone) and Stanley Uris (Andy Bean) – are all grown up, with lives of their own. But not all of them are eager to return to Derry, and some can’t even remember the events of that fateful summer. The old friends must trigger some buried memories and learn to work together again to try and save their hometown – as well as each other.

Returning from the 2017 film, director Andy Muschietti brings a unified vision to “It Chapter Two.” Muschietti recreates the dreamlike, off-kilter setting of the first chapter through unsettling camera angles, disturbing imagery and justified jump scares. The film ramps up the suspense from scene to scene. The sequel features throwbacks to the first film, but it also does a good job of filling new moviegoers in on the key events of the original.

“It Chapter Two” is consistently scary. Skarsgard is chilling and unnerving as the predatory Pennywise, who gleefully feeds off children and their fears. This leads to some quick but graphic violence, which may upset some audience members.

The plot sends its main characters on a scavenger hunt to find items from their pasts, and each experiences their own horror story. From confronting body-image issues, loss of a loved one, sexual identity and family abuse, each character’s journey is tailored to their individual fears and traumas. Though the structure feels a little repetitive, the horror feels even more personal.

Just as “It” expertly cast its young stars, “It Chapter Two” matches up its adult actors perfectly to their child counterparts. The film brings back its child actors in flashbacks that link up appropriately with the characters’ present.

As the tormented Beverly, Chastain is vulnerable yet strong, channeling Sophia Lillis’ gentleness and bravery. As a slimmed-down Ben, Ryan captures Jeremy Ray Taylor’s sensitive nature and believably conveys the character’s insecurities. Ransone, known in the horror genre from the “Sinister” franchise, adds welcome comic relief as the grown-up version of Jack Dylan Grazer’s germ-adverse Eddie. Despite being one of the main characters, McAvoy doesn’t have a lot to do as Bill until the film’s second half. Now a writer, the film playfully kids him for writing bad endings, just like King has been criticized for.

But the film’s standout is Hader. The “Barry” star rises above the rest of the cast as the funny and foul-mouthed Richie, played by scene-stealer Finn Wolfhard (“Stranger Things”) in the 2017 flick. Hader brings heart and pain as Richie, now a stand-up comedian, must confront his own secret and the shame he feels over it.

The Losers are not only working to destroy Pennywise, but find catharsis in their own lives, decades after he victimized them. The film celebrates the power of friendship as the characters deal with their childhood traumas together. It all builds to a sweeping crescendo of tension and terror in the final act. After two films, the gripping conclusion will keep moviegoers on the edge of their seats.

The main knock against “It Chapter Two” is its length. Though the film never feels boring, it’s a whopping 2 hours, 49 minutes, which may test moviegoers’ patience. Like the first film, there’s so many characters that some are more fleshed out than others. This hurts some characters as the film takes a few shortcuts to their development.

With effective scares and an engaging cast, “It Chapter Two” commits to providing the same level of excellence as the first chapter. The follow-up conjures a satisfying end to a new horror classic. 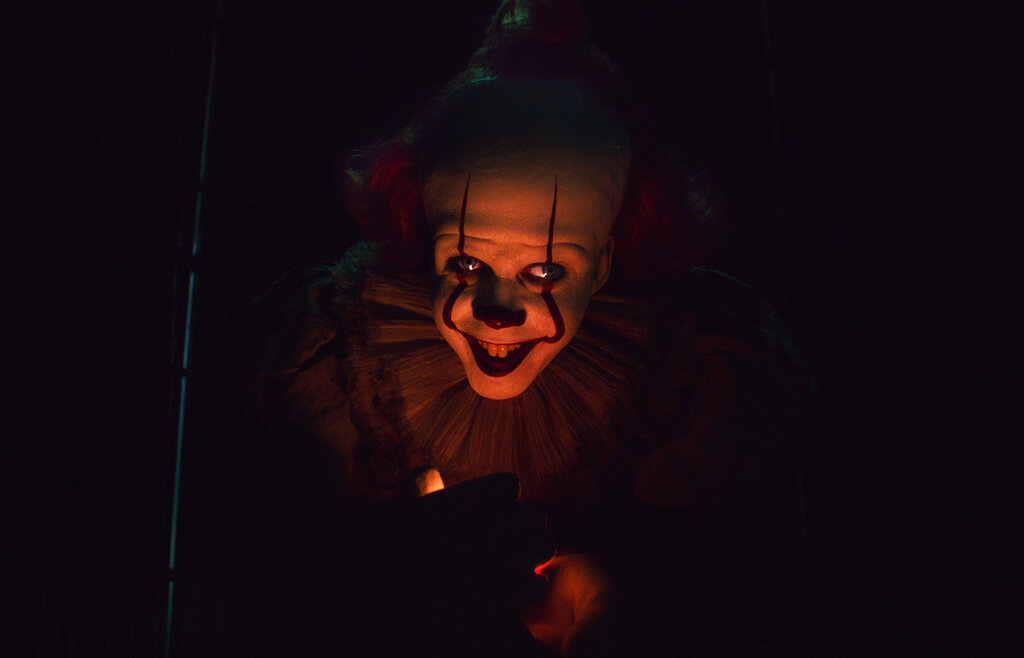 Bill Skarsgard as Pennywise in “It: Chapter 2.” (Warner Bros. Pictures via AP)

Full disclosure, I pass on most horror movies because I don’t enjoy them. That anxiety sticks with me after I leave the theater. The emotional impact movies give us is the reason I love most other genres. However, horror is not something I want to stick with me. That being said, when Jessica Chastian, my favorite actress in the business, is in a horror movie, I make every effort to see that horror movie … even if watching that film requires me to watch two horror movies.

While I didn’t enjoy “It” (2017) as much as most people, there’s no denying its critical and commercial success. It is the highest grossing horror movie of all-time and holds the biggest opening weekend in the genre. Fans loved it and I understand why. The characters are lovable and the child actors knock their roles out of the park. The scares feel natural and it doesn’t rely too heavily on jump scares. Every time the audience feels like it can take a breath, it can’t so the 2-hour, 26-minute runtime mostly flies. Also, Bill Skarsgard gives a chilling and oddly charming performance as Pennywise. “It” (2017) has a few problems, including the trailer spoiling some of the scariest scenes, that knock it down a few notches, but it’s a solid film with a lot of heart. Before the credits roll, the film reveals (not that it was that surprising) this was only Chapter One.

“It Chapter Two” intrigued me with its cast. It collected a strong crew, including three all-stars of the film industry with Chastain, James McAvoy and Bill Hader, to play the children 27 years later. They all did a great job and Hader’s portrayal of Richie proved the biggest standout. Skarsgard again dominates his role as Pennywise. Despite strong performances, the audience fell in love with the kids. I wanted to revisit them. That’s just one of the many areas “It Chapter Two” disappointed.

It fell victim to a sequel’s usual logic of bigger is better. Because of that, every scare was a jump scare. I did jump about 12 times, but it’s difficult for me not to when the speakers blare and something disturbing appears on screen. It left me annoyed after a while.

The plot is bad, driven by a ridiculous premise that the Losers Club must return to Derry and perform a Native American ritual to conquer Pennywise. Yes, that’s really the plot. Some of the funniest parts of the film happen when they make fun of the absurdness of the plot.

The town of Derry also makes no sense. People who live there are disgustingly evil, but it’s never explained. That was one of my problems with the first film. I expected it would factor into the plot of the sequel, that it had something to do with Pennywise. It didn’t.

The film’s fatal flaw lies in its message. I assume it was an accident, but “It Chapter Two” supports bullying and suicide in a matter of 10 minutes. I can’t delve much deeper into that because it will spoil the film, but the fact that it spends most of its franchise displaying why bullying is bad and then undercuts it makes no sense. When it came to the suicide, I understand what the movie was trying to go for, but it failed in its execution. As a result, suicide is noble and bullying is OK in some instances. That’s a bad message to pin to a film.

“It Chapter Two” has strong performances and excellent visuals, but it fails to recapture what made the first one so beloved. This is one of those films that should have a sequel, but the execution failed from the get-go. The script lacked, leaving the one actor who has an illustrious background in comedy shine brightest. The plot is laughable and the underlying message audiences exit the theater with leaves a bad taste in their mouths. “It Chapter Two” has a few pockets of clever film-making, but the balloon didn’t float on this one. It simply leaked air until it finally hit the ground.