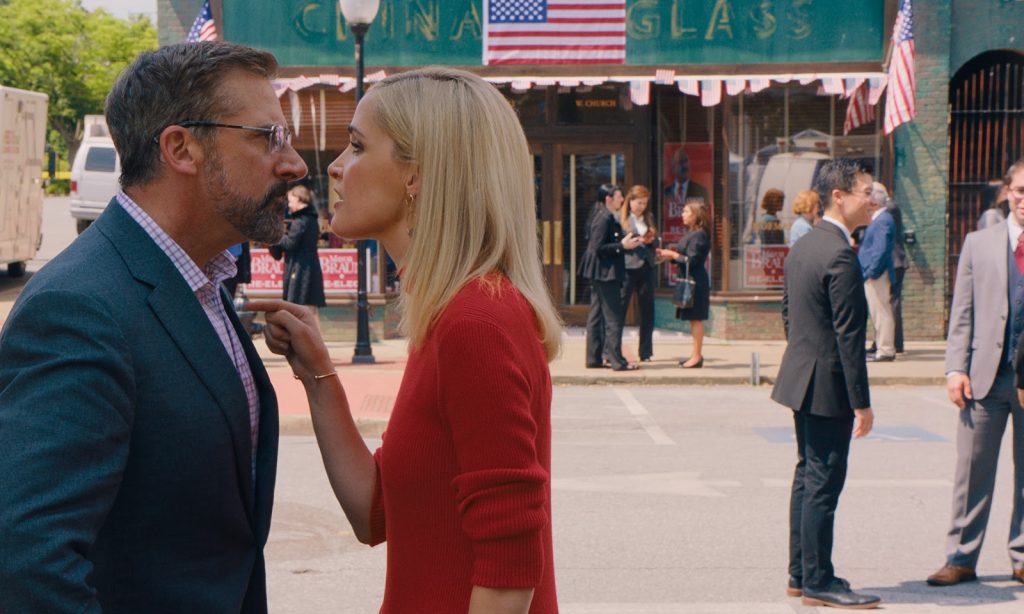 At the start of Jon Stewart’s political satire “Irresistible,” a pair of campaign strategists played by Steve Carell and Rose Byrne admit lying outright to the public to get their candidates elected. Though Stewart is trying to take aim at the political machine, the writer-director uses the same tactic to pull the wool over his audience’s eyes.

“Irresistible” doesn’t reveal its true motives until its third-act twist, which is far more interesting than anything that comes before it. By misdirecting its audience, the film undercuts the very point it tries to make. With its muddled storytelling, cardboard characters and genre identity crisis, “Irresistible” is an ill-conceived misfire, failing to live up to its name.

When Democratic strategist Gary Zimmer (Carell) sees the clip, he decides to recruit Jack to run as the party’s candidate against the Republican incumbent for mayor. Gary senses an opportunity to expand the Dems’ base. Reluctant at first, Jack gives in, with the condition that Gary stays on in Deerlaken as his campaign manager.

The GOP smells a threat to the mayoral seat and sends cutthroat strategist Faith Brewster (Byrne) to the small town, reigniting a feud with Gary. As the race grows contentious, Deerlaken is vaulted into the national spotlight as a battleground for the dueling parties.

Six years after his promising debut “Rosewater,” Stewart’s election-minded follow-up lacks the nuance of his freshman effort. “Irresistible” is devoid of the bite you would expect from Stewart, the former “Daily Show” host whose sharp insights into politics have made him a household name.

The film trudges along aimlessly for most of its runtime, carried by the charisma of its likable leads. “Irresistible” mostly gets by on contrasting Gary’s big-city nature against the simple dispositions of the town’s residents, drawing some chuckles.

This brings me to the twist. When I’m watching a movie, I like to check the time to keep track of how the plot is progressing at key intervals. About 45 minutes in, I realized not a lot had happened in “Irresistible,” a bad sign at nearly its half-way point. At the hour-and-25-minute mark, I realized I wasn’t invested in either side of the election, which was concerning with so little of the film left.

Then with 15 minutes to go, the shoe drops as “Irresistible” unveils its gut-punch twist. It’s an intriguing idea – this is the film that Stewart should have made. Stewart even tries to compensate by running an interview with a real-life campaign finance expert over the end credits to unpack the idea some more. But it’s too little, too late. By hiding the film’s purpose from the audience, Stewart lessens the impact of his own message. “Irresistible” talks down to viewers in the same way that Gary talks down to Deerlaken’s townspeople.

In a movie about small town America, “Irresistible” doesn’t develop its characters. We only meet some of Deerlaken’s residents, notably Diana (Mackenzie Davis), Jack’s level-headed daughter who is helping with the campaign. Other residents have a one-note gimmick, like a character who likes to give out nicknames and a coffee-shop owner taken with Gary. The film tells us the town has been on the decline since a local military base closed, but we don’t see the residents struggling. We don’t see any of the immigrants that Jack stands up for in his star-making speech, nor any minorities. The script skimps on the depth needed to make these people feel real.

The film has an opportunity to use Gary’s experiences with the town’s residents to make him question his jaded views on politics – and for one scene, this appears to be true. But the movie is more concerned with getting to its twist than fleshing out Gary’s arc. The main characters are the same at the end of the film as they are in the beginning.

As it leans into being a political satire, “Irresistible” awkwardly flirts with being a romantic comedy. Gary feels a connection with the commonsense Diana, which comes across as problematic as the strategist is nearly twice her age. He also shares a heated sexual tension with the fiery Faith, and their caustic back-and-forths are hilarious.

But the film introduces these romantic avenues without knowing what to do with them. In the end, the movie offers up three different romantic outcomes for Gary, which is confusing to viewers. If you’re looking for a film that smartly blends both political and romantic comedy, you’re better off trying last year’s underrated gem “Long Shot.”

Despite a charming cast and some laughs, Stewart’s second time behind the camera is a political disaster. At a steep $20 to rent, “Irresistible” is like a candidate asking for a campaign contribution. But you can still save your money. The toothless film breaks its promise to viewers, keeping its agenda under wraps. Stewart squanders his own good idea for the sake of a twist that comes too late to save the film. 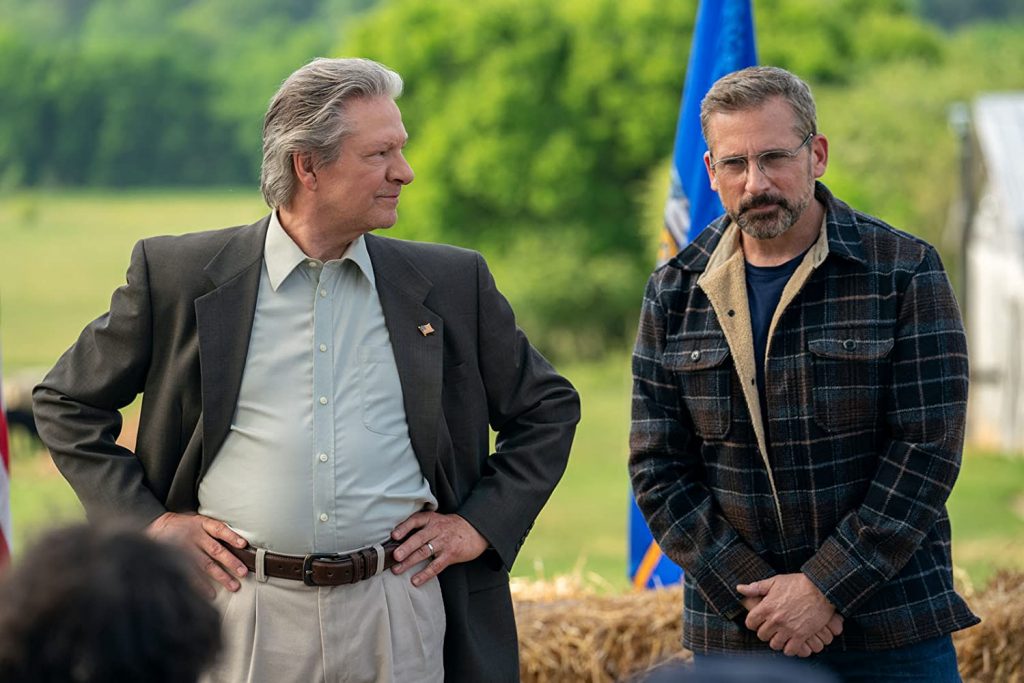 The trailer for “Irresistible” sold a funny political satire with potential pop as Jon Stewart sat in the director’s chair. However, its misguided storytelling and waste of a talented cast diminish its impact.

Stewart, who also wrote “Irresistible,” struggled to build around his good idea. This movie is about an hour and 25 minutes of one thing and then the film becomes something completely different in the last 15 minutes. That last 15 minutes would have made for a more interesting movie, which left me pretty frustrated.

Stewart thought he had such a good idea that he wanted to save it for shock value. He wanted to make people think, talk and bring about change. He also bangs his message home during the end credits. He includes a clip of an interview he did with campaign finance expert Trevor Potter, which is meant to provide an awesome stinger for the film.

Here was the result:

Sometimes subverting audiences’ expectations is a good thing. But, sometimes writers should leave the M. Night Shyamalan twist in the bag. Building around a great idea or a good twist only works when the rest of the film is good and engaging. Speaking of, Shyamalan hit a bit of a rut after he became known as the guy who always has a twist at the end of his films. He course-corrected with 2017’s “Split.” The writer/director made a good movie that could stand on its own without a twist. Then he threw a twist at the audience. That’s the key about the late 180 in a film. It’s the movie’s job to not just get the audience there, but to engage and thrill it along the way.

Instead, “Irresistible” decided to give its viewers, who paid $20 if they rented it, a generic political satire that they have seen done so many different ways. That would have been disappointing on its own, but I would have at least walked away saying, “Well, at least it made me laugh a few times.” However, almost an hour and a half later, the film reveals its purpose. And I realized rather quickly that this should have been the whole movie. That’s when “Irresistible” became anything but.

Stewart didn’t develop his idea. He threw it in at the end and then told us more about it during the end credits. He disobeyed the cardinal rule of filmmaking. Show. Don’t tell. The impact is much greater. I don’t have to go far back to give an example for how to do it right. In the last film we reviewed at Take 2, “Da 5 Bloods,” director Spike Lee interspersed images and video that complement his fantastic movie. He doesn’t need to put words on the screen or put a camera on people talking to each other. He also does this effectively in “BlacKkKlansman.” His imagery accentuates the point. He doesn’t have to put someone on screen to say, “This is bad!”

Also, the message falls short because the audience doesn’t see the impact of it. We are given statistics, but the film doesn’t delve enough into the community to make us care about the people.

Here’s how to fix it:

Tell the story from the community’s perspective. I know I keep saying it, but the film spends an hour and 25 minutes with Steve Carell at its center. The other actress featured on the movie poster is Rose Byrne. They should have been side characters. “Irresistible” had plenty of strong actors, which should have been led by Chris Cooper and Mackenzie Davis. Show the struggles of the community. Let the audience feel what they feel. No twist is needed.

On a side note, Carell’s character has an interest in Davis’ character, who is half his age. Carell is 57 and Davis is 33 in real life, but Davis says she’s 28 in the film. Davis’ character at least points out it’s weird that Carell thinks they have something together, but throughout the film it made me uncomfortable. It just seemed wrong, especially since the audience didn’t know how old she was supposed to be for most of the movie.

I’m not going to waste a ton of time telling you great actors such as Carell, Byrne, Cooper and Davis did a nice job with what they were given. The film also made me laugh a good amount, but the bottom line is this. An hour and 25 minutes of this film is filler. The last 15 minutes is the introduction to an idea. The greatest trick “Irresistible” pulled was it made me believe I was watching a generic comedy. The twist was I watched something that could barely be considered a movie at all.