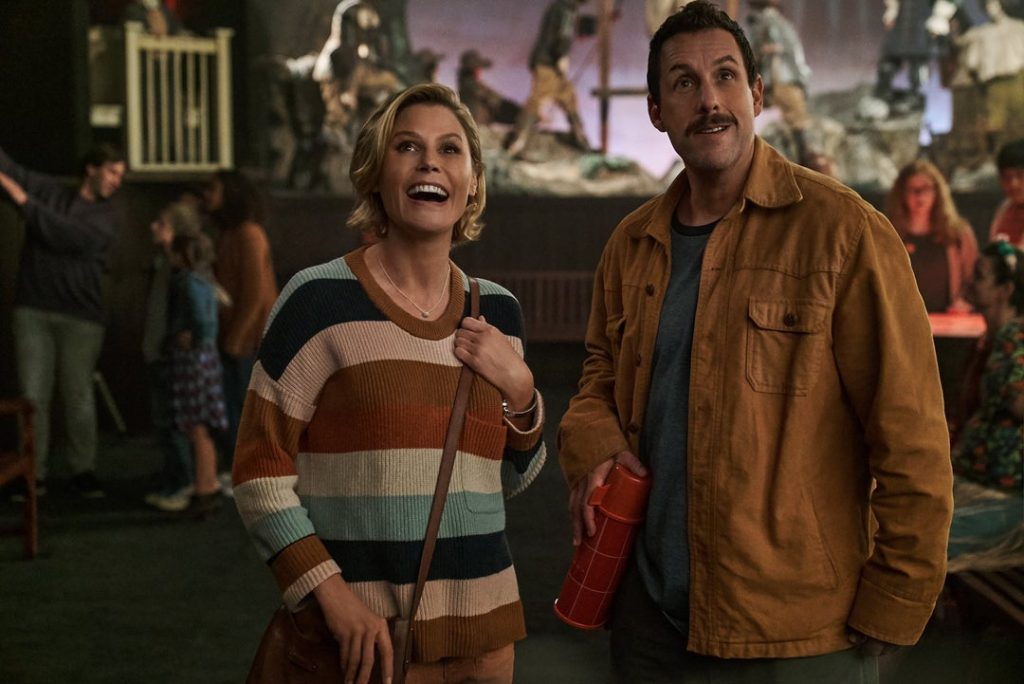 I still think a lot of his early work is very funny. 1996’s “Happy Gilmore” is my favorite film of his. His run started to slow in the early 2000s, but he still had some decent films. His films’ quality fell off a cliff with 2011’s “Jack and Jill” and 2012’s “That’s My Boy.” He was irrelevant in my movie-going life for years (although he found success with the “Hotel Transylvania” franchise) until 2019’s “Uncut Gems” came out of nowhere. Sandler was praised and many thought he was snubbed as a best actor nominee. He started as a beloved comedy actor before making mostly garbage films. Then, he found new life with an Oscar caliber performance. Now, it appears we’re back to trash films, or in this case “Hubie Halloween.”

Movies have been hard to come by this year because of the pandemic and we’ve seen a few clunkers. This one might be the worst.

It’s a comedy that didn’t make me laugh. Now that has happened plenty of times, but in the case of “Hubie Halloween” I struggle to understand who the film is for. It’s a PG-13 comedy that for the most part is pretty childish. It has references to Sandler’s older films such as “Happy Gilmore” and “Billy Madison,” which were there to please fans of his mid-90s work like me I guess? Somehow after all of these years, Sandler is still doing a weird voice that is absolutely unnecessary in the film. He should have evolved past that kind of comedy by now as he’s been doing that same schtick for more than 25 years.

It also bothered me that this movie wasn’t realistic. The film appears to be set in the real world, but then supernatural things start happening. Also, Sandler’s character, Hubie Dubois, carried a thermos that makes Batman’s tool belt jealous. Every situation he finds himself in, Hubie gets out of because the thermos turns into a grappling hook or a flashlight or a megaphone or mace. There’s a character who turns into a werewolf who the film eventually established escaped from an insane asylum. But … he really appears to be turning into a werewolf. The reveal of the mysterious lurker of the film makes no sense. “But, Joe, it’s a dumb Adam Sandler movie. Does it have to be realistic?” No. But it has to be cohesive. Don’t establish a real-world scenario and throw in the unrealistic just because you feel like it.

To add on to the lack of realism is the film’s mean spirit. Everyone in the town makes fun of and plays pranks on Hubie simply because he’s different and has no friends. I understand what the film is going for as it’s trying to send a message that Hubie is the strongest person because he doesn’t allow the town’s bullying to affect his life. However, this is not the way to go about it. All of the adults in the town also make fun of him and have an absolute blast doing it. It’s so juvenile and quickly turned me off to the film, especially when they took actors who I love and transformed them into jerks. That takes me to my next point.

No matter how bad the movie, Sandler always has a slew of actors and celebrities who will be in that terrible film beside him at the drop of a hat. A lot of them are very talented people. In “Hubie Halloween,” we’ve got Kevin James, Julie Bowen, Ray Liotta, Steve Buscemi, Rob Schneider, Maya Rudolph, Tim Meadows, Michael Chiklis, Ben Stiller, Noah Schnapp, Kenan Thompson and Shaquille O’Neal. A lot of their characters are just terrible people who act like a bunch of grade-schoolers. Kevin James has the right idea. He spent this entire film in sunglasses and a mullet wig. You know who he is, but at least he’s trying to hide himself. I tried to like Bowen’s character, Violet Valentine. She is the only person who actually likes Hubie for the good person that he is, but that’s really all we have to go on. That’s apparently enough for Violet to be madly in love with him. There’s no flashback scene. There’s nothing to establish why she loves him. In turn, the one-note character was the most likable by default. She was the best of a bad situation.

“Hubie Halloween” is terrible. It reduces quality actors to juvenile humor. It’s mean-spirited for the sake of being mean-spirited. Just when I thought Sandler might enter a new phase of his career (a better one at that), he fell right back into the rut he’s been stuck in for way too many years. Sandler seems like a nice guy and who am I to tell him what he can and cannot do? But if he keeps making movies like “Hubie Halloween,” I’ll just ghost him. 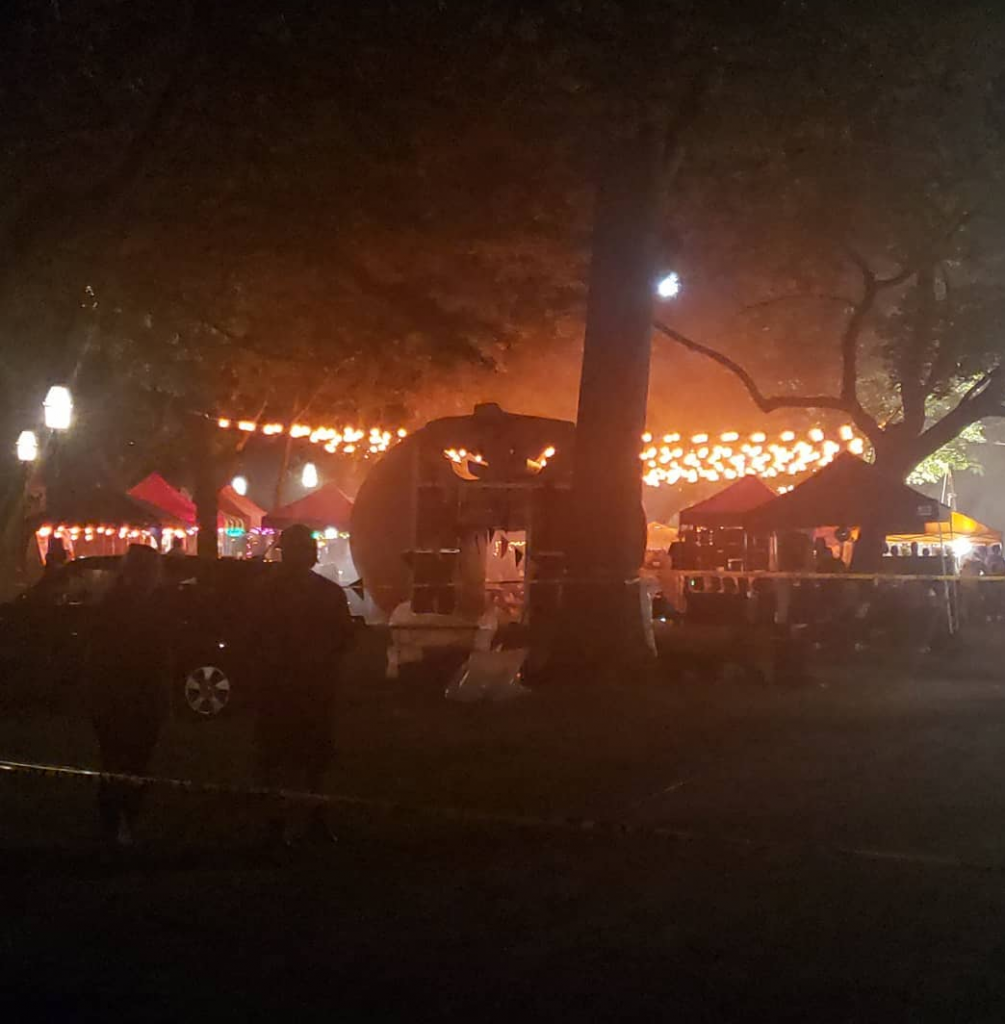 The set of “Hubie Halloween” during filming in July 2019 in Salem, Massachusetts. (Courtesy of Jill Karichner)

I first heard of “Hubie Halloween” from a friend who was vacationing in Salem, Massachusetts, last summer. The Adam Sandler holiday-themed movie was shooting across from her hotel, and she took a few photos of the set. I made a mental note to keep an eye out for the film. Over a year and a half later, “Hubie Halloween” has debuted on Netflix, just in time for the spooky holiday.

The film comes after Sandler’s career-best performance earlier this year in the tense drama “Uncut Gems,” which indicated a welcome turn from the low-brow comedies the comedian has made over the last decade. Though I haven’t seen any of the films he’s churned out for Netflix until now, I suffered through 2013’s “Grown Ups 2.” The incoherent mess is among the worst movies I’ve ever seen.

Featuring an actual storyline and structured plot, “Hubie Halloween” is a step up from “Grown Ups 2,” which isn’t saying much. The crude, mostly unfunny Halloween flick is mercilessly mean-spirited, turning a cast of Sandler’s well-known Hollywood friends into big bullies. With its infantile humor, out-of-touch jokes and references to better Sandler films, the film feels more like a relic from the ’90s that’ll make you wish you were watching “Billy Madison” or Happy Gilmore” instead.

Sandler plays the dim but kind-hearted Hubie Dubois, who considers himself the protector of Salem. Despite always looking out for its townspeople, the well-meaning deli worker is relentlessly made fun of by kids and adults alike. When Halloween arrives, the ever-vigilant Hubie – armed with his versatile thermos – gets his chance to save the town on his favorite holiday as residents start mysteriously disappearing.

“Hubie Halloween” satisfies the quota of bodily function jokes that Sandler fans expect from his movies. About two and a half minutes in, the first vomiting gag occurs. There’s also plenty of urination and farting. While kids may laugh at the underage humor, adults like me may have to grit their teeth to get through it. What did make me laugh – one of the only things – was a running gag that sees Hubie’s mother, played by the saucy June Squibb, wearing a series of T-shirts with inappropriate sayings that she doesn’t understand.

The cringeworthy flick constantly picks on its main character, which makes the film hard to watch. Characters often throw objects at Hubie, whether he’s riding his bike through town or speaking about Halloween safety to kids. The running gag is meant to be funny, especially as the size and quirkiness of the objects escalate. But instead, it just comes off as terribly mean.

Even the adults take repeated shots at Hubie when all he’s trying to do is protect the town. Ray Liotta hurls childish nicknames at him, mulleted cop Kevin James bats away his concerns, and cruel couple Tim Meadows and Maya Rudolph play awful pranks on him. The whole film is one bully after another ganging up on Hubie. Yes, the film ends with a message about why bullying is wrong, but it unnecessarily beats up its protagonist along the way.

The abuse Sandler’s character takes shows why the humor in “Hubie Halloween” feels dated. At the very least, Hubie is socially awkward, with Sandler donning a weird voice to play him. But at most, the stunted Hubie may have a learning disability. Yet instead of showing concern, most of the townspeople are making fun of a character who may be mentally challenged. It’s an uncomfortable undertone in a film that is geared toward families to watch together. The movie would have worked better if Sandler dropped the voice and played Hubie as a naïve, wannabe do-gooder. There’s also a farming couple, played by Lavell Crawford and Kym Whitley, whose threats of domestic violence against each other are played for laughs. The insensitive banter goes against modern sensibilities.

The film’s conflicted tone becomes more problematic with the addition of characters who ultimately go nowhere. Sandler movie mainstay Steve Buscemi shows up as a character who appears to turn into a werewolf. Buscemi does a great job with the frightful transformation, adding a sense of urgency. But then the movie casually throws away the plotline. There’s also an escaped mental patient, which allows the film to pay homage to “Halloween.” But then the light-hearted film remembers it’s supposed to be light-hearted, and discards that thread, too.

Amid various callbacks to “Happy Gilmore,” “Hubie Halloween” reunites Sandler with leading lady Julie Bowen. While I liked their romance in “Happy Gilmore,” their attraction feels forced here. As working single mother Violet, the likable Bowen is one of the only people in town who’s nice to Hubie. But the character is thinly sketched out. The only reason she seems to like Hubie is because he’s nice, too. The film seems to prize Violet’s status as the prettiest girl in high school and does little else to cement a connection between the two characters.

With its mean nature and dated humor, the scarily bad “Hubie Halloween” is full of more tricks than treats. As it checks off the boxes for juvenile jokes and familiar gags, the holiday film may be enough to satisfy Sandler fans, but that doesn’t mean it’s a good film. If the movie was dropped into my trick-or-treat bag, I’d give it back.