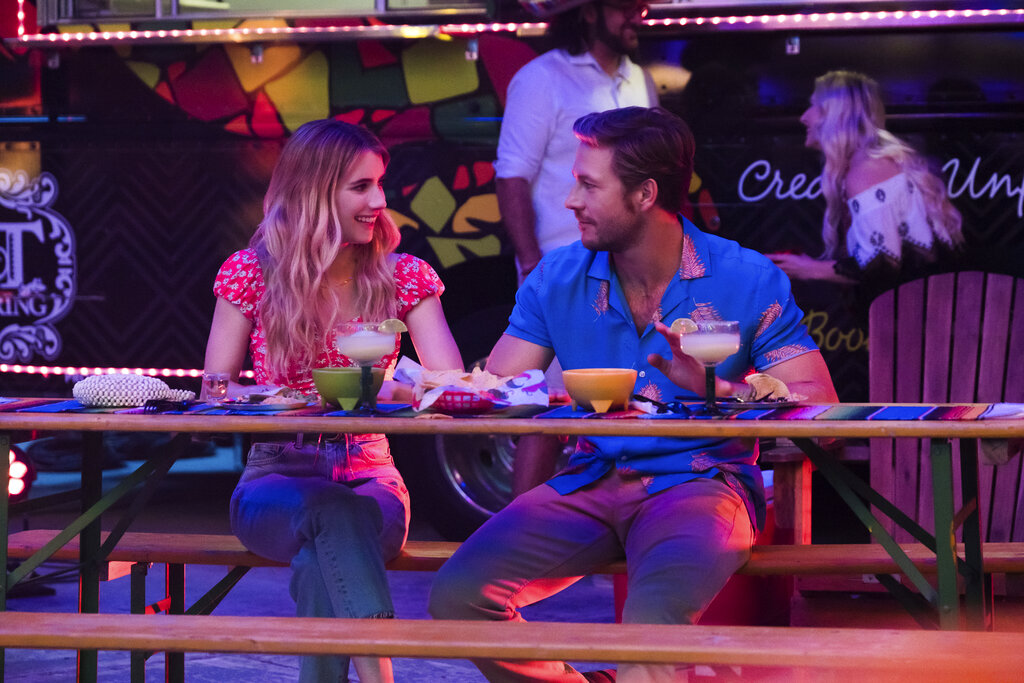 As we get closer to Christmas, some things are inevitable. Holiday cups at Starbucks. Merry music on the radio. And dozens – and I mean dozens – of Christmas movies on TV.

Between Hallmark, Lifetime and Netflix, I drink up these cookie-cutter movies as much as I guzzle down peppermint mochas from Starbucks. So imagine my surprise when I put on “Holidate,” the new holiday offering from Netflix, and got something extra in my stocking.

Instead of a traditional, sanitized Christmas rom com, “Holidate” unwraps a raunchy, laugh-out-loud outing. The hilarious and refreshing entry bucks the conventions of its genre, differentiating itself in a crowded field.

But while the film goes out of its way to proclaim it’s not your typical Christmas rom com, “Holidate” becomes exactly that as it falls into the same trappings of the genre’s standard fare.

The flick follows the eternally single Sloane (Emma Roberts) and Jackson (Luke Bracey), who are tired of enduring the holidays without a plus-one. They decide to be each other’s platonic dates for the holidays spanning the rest of the year, starting with New Year’s Eve. The arrangement works out well as Sloane and Jackson party it up on each successive holiday, from Valentine’s Day through Halloween. But as they spend more time together, a hitch emerges in the plan: the two start developing feelings for one another.

I’ve seen enough Christmas rom coms to know how saccharine they are, and I don’t mind the toothache I get from them because I expect it. Typically, the romantic leads are perfect people, and the budding relationships are completely wholesome.

However, “Holidate” takes that well-worn formula and crushes it, gifting a Christmas movie for people who like crude humor. While most Christmas movies steer clear of the bedroom, “Holidate” draws laughs from sexual innuendo and hi-jinks, pushing the boundaries of the genre. This is not a family-friendly film, nor is it trying to be.

Sloane and Jackson are the opposite of innocent and naive. The jaded, foul-mouthed pair trade insults as frequently as they throw back beers on St. Patrick’s Day and shots on Cinco de Mayo. But both also reveal their vulnerabilities as they face their fears of relationships. Roberts and Bracey have a natural back-and-forth banter that makes their characters’ attraction believable. Like any Christmas movie, it’s easy to root for them to end up together.

The two also demonstrate a flair for physical comedy as Sloane and Jackson find themselves in some embarrassing situations, including a fireworks accident on the Fourth of July and an accidental ingestion of a laxative on Halloween. The ensuing antics are cringeworthy yet funny, something you’d never see in a Hallmark movie.

As a holiday flick, “Holidate” expands its horizons by featuring other celebratory days besides Thanksgiving and Christmas. The film embraces the yearlong holiday calendar, including a cookout on Memorial Day and a wedding on Labor Day. For Easter, I burst laughing at an egg hunt that featured children running out to a Ludacris song.

As eager as “Holidate” is to turn Christmas rom coms on their head, it inevitably morphs into a traditional entry. The self-aware film makes a point to call out the genre on certain tropes before succumbing to those very things itself. It can be a bit much as “Holidate” hits viewers over the head with its meta-ness. However, the film also knows its audience and what they want. Unlike the rest of the film, its ending isn’t especially creative. But it’s enough to leave fans of the genre satisfied.

While “Holidate” puts the focus squarely on Sloane and Jackson, the film introduces subplots that it barely hashes out. Two characters share a kiss that threatens to cause a scandal, until it doesn’t. Sloane’s brother gets engaged despite the fact he and his fiancée don’t seem to know each other that well. These storylines end up being wrapped up as part of the film’s predictable ending with little resolution.

The film often requires its viewers to suspend disbelief. Jackson, who is a golf pro, must deal with a possibly debilitating injury that doesn’t seem to affect his job. Then again, you probably wouldn’t be watching a film called “Holidate” if you expected it to adhere to real-life logic.

The rom com includes some big names in its cast. Kristin Chenoweth shines as Sloane’s flashy and free-spirited aunt, Susan. Chenoweth adds depth to the side character, whose story parallels Sloane’s. Frances Fisher is fun as Sloane’s mom, scolding her daughter for wearing pajamas for her remote job. Jessica Capshaw scores quite a few laughs as Sloane’s sister, Abby, who misses having a life outside of being a mother.

“Holidate” tries to have its fruitcake and eat it too – and for the most part, it succeeds. The bawdy Christmas rom com spends most of its runtime fighting against the conventions of its genre before eventually giving into them. But it’s enough to separate itself from the rest of the Christmas films begging for your attention this season. For someone who’s seen hundreds of these films, “Holidate” was a welcome surprise under the tree for me. And it’s a gift I’m willing to drink up again, peppermint mocha in hand. 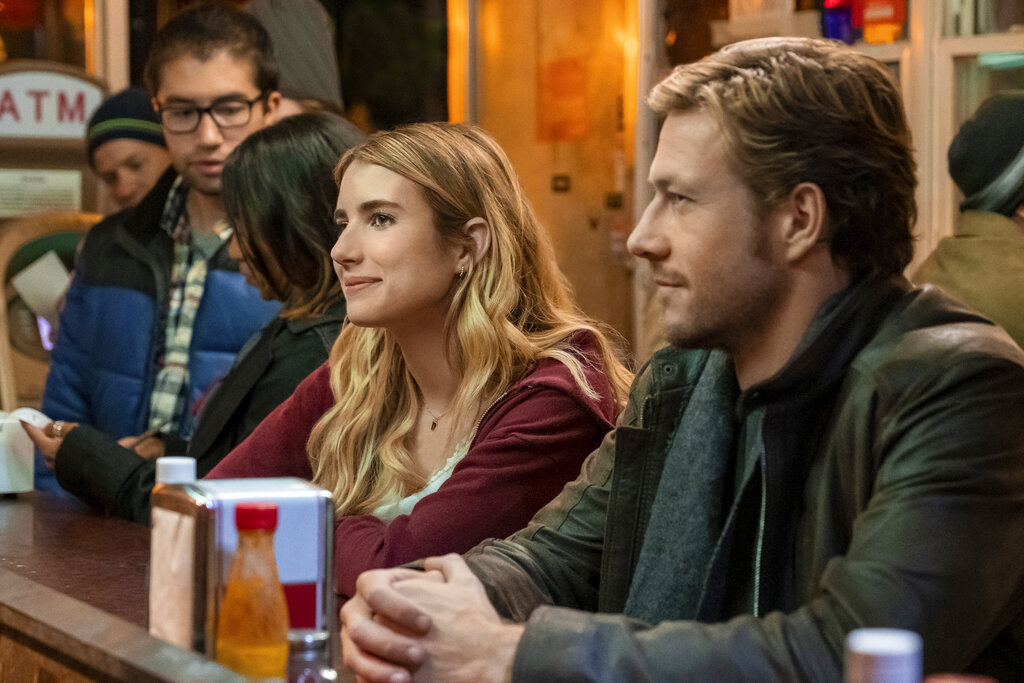 It’s the beginning of November, so we’ve all been in Christmas mode for at least a week as we try not to forget Thanksgiving is right around the corner. With the Christmas holiday comes the Christmas movie, and Netflix’s “Holidate” is already waiting for you at home. It hit the streaming service Oct. 28. A little early? Originally I thought so, but “Holidate” doesn’t just cover Dec. 25. The film spans a year and all the holidays that come with it. Can that separate it from the cascade of Christmas movies that already exist? Yes and no. While “Holidate” tries to break free from the typical holiday romantic comedy formula, it struggles to rid itself of the tropes.

This kind of film needs likable or at least watchable leads. Emma Roberts (Sloane) and Luke Bracey (Jackson) fit that bill. The duo has instant chemistry and from the moment they meet, you’re rooting for them. Both struggle to find a good date for the holidays, so when they run into each other at the mall they decide to serve as each other’s date for every holiday. Oddly, I haven’t seen Roberts act much. The movie I’m most familiar with her in is 2016’s “Nerve.” I never thought I’d talk about the enjoyable “Nerve” again after I saw it, but it has now come up in two of my reviews in the past few months. She jells with another actor I wasn’t too familiar with in Bracey. I liked him in 2016’s “Hacksaw Ridge,” but this was the first time I saw him act with his natural Australian accent. It’s no surprise that he comes off more naturally. He brings an energy and charming personality, which the film needs.

The film also has plenty of notable and capable actors that it ends up not doing much with. The movie centers on Sloane and Jackson’s relationship, but it also builds toward revealing flaws with Sloane’s family members. It all seems to be building toward a great climax, but nothing comes of it. It almost seemed that there was a scene or two missing.

As I mentioned earlier, Sloane and Jackson get together for every holiday — not just the big ones. This includes St. Patrick’s Day, Cinco de Mayo and Labor Day. The idea of putting them in so many holiday scenarios works beautifully as it keeps the film fresh for most of the runtime. It also adds to the humor, as this movie had me laughing quite a bit. While you shouldn’t watch it with your kids, the laughs really land. Kristin Chenoweth (Aunt Susan), Andrew Bachelor aka King Bach (Neil) and Jessica Capshaw (Abby) have great comedic moments.

“Holidate” proves self-aware, which helps it to a certain degree. However, the film dips into that well too often. The characters often say they don’t like when something happens in a movie, but then they do the thing they said they hate. “22 Jump Street” did a more effective job of the self-referential humor. That 2014 comedy sequel would often have characters say, “Do the same thing,” when anyone tried to deviate from the formula that made “21 Jump Street” so successful. The film flows better when it leans into the self-referential humor like the “Jump Street” franchise did. Instead, characters in “Holidate” spent the whole time saying they weren’t going to follow the conventions, but then fell back into the conventions. This movie goes exactly how you think it will go. That’s where it loses steam toward the end as it reverts back to a typical romance we’ve seen so many times.

While “Holidate” doesn’t separate itself enough from the typical, the cast is fun to watch, even though it’s not always given enough to do. I laughed quite a bit, and I wouldn’t mind watching it again.