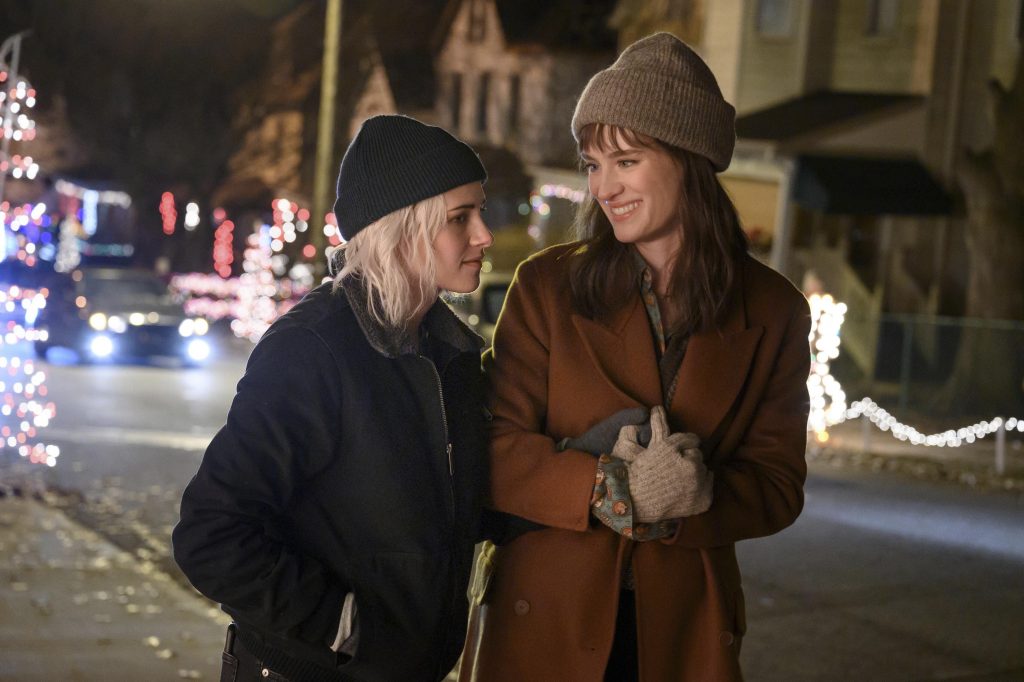 We’ve seen a number of holiday offerings leading up to the Christmas season that used the holiday film formula as its base, but provided a unique twist. Netflix’s “Holidate” explores holidays throughout the year, Netflix’s “Jingle Jangle: A Christmas Journey” is a musical with a mostly Black cast and now Hulu’s “Happiest Season” gives us a lesbian couple at its center. What makes me happiest is they all work.

The latest holiday offering “Happiest Season” has a stacked cast with Kristen Stewart (Abby) and Mackenzie Davis (Harper) starring as the lesbian couple. For the casual movie-goer, Stewart gets a bad rap because most people know her from “Twilight.” In reality, she has built a solid career, mostly in independent films, and come very far as an actress. Stewart shines brighter than the rest in this film as she skillfully handles the emotional scenes, while the awkward sequences fall right into her wheelhouse. She has an immediate chemistry with Davis and jells well with Aubrey Plaza (Riley) and Dan Levy (John).

I love Davis in mostly everything, and I think she’s good in this film. She was just surprisingly unlikable at times. It worked for the film, but took me a little off guard. It made me question why Stewart’s character would stay with her. However, you can be the judge because what I loved most about this movie was it provided a lot of perspectives. There were four main gay characters in the film and they all have different experiences when coming out to their parents. Some their parents supported them and others kicked them out of the house. It’s not like movies haven’t explored this before, but “Happiest Season” approaches it in a beautiful and emotional way.

That’s not to say this isn’t a romantic comedy, so it has its laugh and the ending is wrapped in a nice happy bow. However, the last 30 minutes is what took this film from average to good. Levy is hilarious for most of the film, but his heartfelt conversation with Stewart toward the end proves his best scene. There were a few sequences in the final act that made my heart drop. It was a beautiful and heartfelt ending with a lot of different perspectives. It’s fascinating and heartbreaking to explore the fact that gay people have to come out to their parents, family and friends without knowing how anybody will react. Meanwhile, straight people are just straight. That’s it. No conversation.

Plaza has a different role for her and she nails it. She jells perfectly with Stewart, which pushed me to ponder if maybe Riley is a better fit for Abby. Again, you be the judge. I loved Mary Holland (Jane) in her role as the third overlooked sister. She made me laugh quite a bit, but also had emotionally powerful moments of her own.

We’re all the way down here and I haven’t even mentioned Alison Brie (Sloane). I did mention the stacked cast right? She isn’t given too much to do other than rival Davis’ character, but it just goes to show the deep cast. Mary Steenburgen (Tipper) gains more experience parenting rival children (“Stepbrothers” comes to mind). Tipper is the wife of mayoral candidate Ted (Victor Garber aka the actor who played the architect of the Titanic in “Titanic”).

My only knock on the film is its predictability. Although it strays from the traditional Christmas movie formula, we’re all familiar with the base plot. We know what’s going to happen and we know how it’s going to end. I thought maybe for a second the film would alter the formula, but it didn’t. Also, the film wraps up quickly so a lot of the emotional shifts are a rapid 180. These aren’t huge problems, they just stopped it from becoming truly unique.

“Happiest Season” separates itself enough from the traditional holiday formula, while still giving us the laughs and cries we’re used to in the genre. I love the last 30 minutes and that will always stick with me. The cast is great and the performances are heartfelt. The exploration of how a gay person comes out to the world is fascinating and heartbreaking. This film has a little bit of everything, which is something fans of the genre and casual viewers can be thankful for. 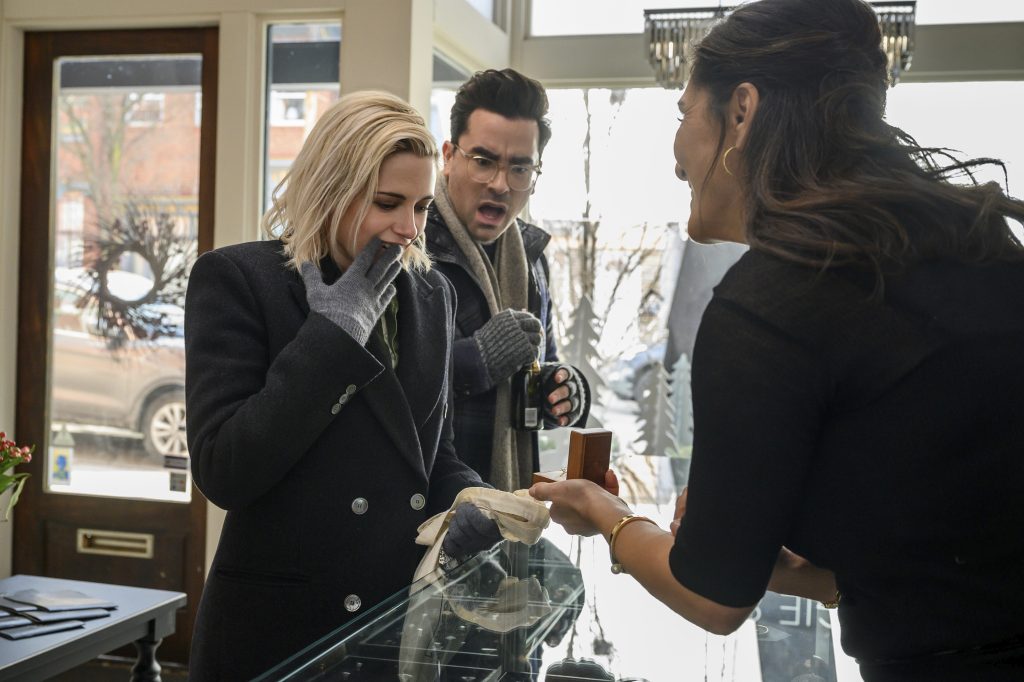 “Happiest Season” delivers a special gift this Christmas. The first gay holiday rom com backed by a major studio beautifully handles heavy subject matter while serving up laughs. The tender Hulu film spotlights a perspective rarely explored in the genre and tells it through a familiar framework, making it accessible for audiences.

As charming as it is emotional, “Happiest Season” tells the story of a lesbian couple with care, sensitivity and maturity, backed by a strong cast. Though the film hews so closely to genre conventions that it becomes predictable, “Happiest Season” ushers in a turning point for Christmas romances. The landmark offering opens the doors for more inclusion and representation in the much-loved genre.

The holiday film focuses on Abby (Kristen Stewart) and Harper (Mackenzie Davis), who have been blissfully seeing each other for about a year. When Harper asks Abby to come to her family’s home for Christmas, Abby decides to ask her girlfriend to marry her during the visit. But on the ride there, Harper reveals she has yet to come out as gay to her conservative family. Until then, Abby must pretend to be Harper’s roommate. The couple’s relationship is put to the test as they face the family’s traditional values, an intense rivalry among Harper’s sisters, and the emergence of Harper’s exes – both male and female.

While most holiday rom coms offer idealized portraits of their characters and decked-out towns, “Happiest Season” feels raw and real. Writer-director Clea DuVall based the film on her own life experiences, and that authenticity comes through in the insightful script. The movie was shot in Pittsburgh, but the story could happen anywhere. The film was originally set to debut in theaters but landed on Hulu due to the coronavirus pandemic.

As a Christmas rom com, “Happiest Season” stays true to formula. The offering strikes the right balance between its wacky hijinks and sincere moments. There’s plenty of screwball humor as Stewart and Davis sneak around Harper’s house, trying to keep their relationship secret. In one sequence, Davis takes to the ice rink in a slapdash competition with her high-strung sister Sloane (Allison Brie). And in a scene that’s perhaps too on the nose, Stewart finds herself stuck in a closet hiding from Harper’s uptight mother, Tipper (Mary Steenburgen). Co-writer Mary Holland shines as Harper’s oddball sister Jane, earning quite a few laughs.

The holiday flick seamlessly pivots between heartfelt and heartbreaking. “Happiest Season” is not just a romance, but a coming-out story. By featuring a lesbian couple as its lead relationship, the rom com uses its platform to tell the stories of various gay characters, providing a showcase for an underrepresented group in cinema.

There are four such characters in the film. In addition to Abby, who’s been out of the closet for a while, and Harper, who’s still coming to terms with her sexuality, there’s John (a hilarious Dan Levy), Abby’s devoted best friend, and Riley (an excellent Aubrey Plaza), Harper’s ex-girlfriend who’s still dealing with the stigma of being a lesbian. “Happiest Season” makes sure each character’s story is heard and carries weight. In the film’s best scene, John and Abby share a heart-wrenching conversation about how each gay person’s coming-out experience is different. The affecting scene shines a light on an everyday struggle that is infrequently explored in the genre.

The relationship at the heart of “Happiest Season” is a complex one, brought to life exquisitely by Stewart and Davis. The two share an easy chemistry, which is complicated by the difficulties of hiding their relationship.

As Abby, Stewart is immensely likable as the audience’s conduit for the fraught homecoming. The actress’s awkwardness is endearing and perfect for a role that requires the character to hide her true self. The level-headed Abby is loving, caring and sympathetic, which makes viewers connect with her immediately. On the other hand, audiences may find it hard to connect with Harper. The more the film reveals about Abby’s girlfriend and her family, the easier it becomes to dislike her. As the movie went on, I found myself wondering why Abby would want to be with Harper, who I increasingly saw as the movie’s villain. Abby’s dilemma grows more complicated when she forms a bond with Riley, whose level-headed doctor has achieved the kind of self-confidence that Harper lacks.

This brings me to what could be the film’s biggest flaw, and a question that is sure to polarize viewers: Does Abby end up with the right person? Despite providing a new twist, “Happiest Season” clings so hard to the tropes of Christmas rom coms that the script insists upon a certain ending for its characters. But whether the film needed to end that way is debatable.

Though the film sets up its ending, it may undo some crucial character development as Abby makes some important realizations in the final act. But like most holiday flicks, the rom com ends abruptly, so there’s not enough time for audiences to reconcile Abby’s choice before the end credits roll. It’s ultimately up to viewers to decide whether Abby made the right decision.

Unwrapping a refreshing twist, the sweet and heart-tugging “Happiest Season” marks a long-awaited breakthrough for gay couples to take center stage in holiday rom coms. The lesbian love story finds a perfect fit in a mainstream Christmas film, giving gay characters a chance for their coming-out stories to be told. Despite its reliance on genre conventions and polarizing ending, the holiday rom com paves the way for more inclusive love stories.